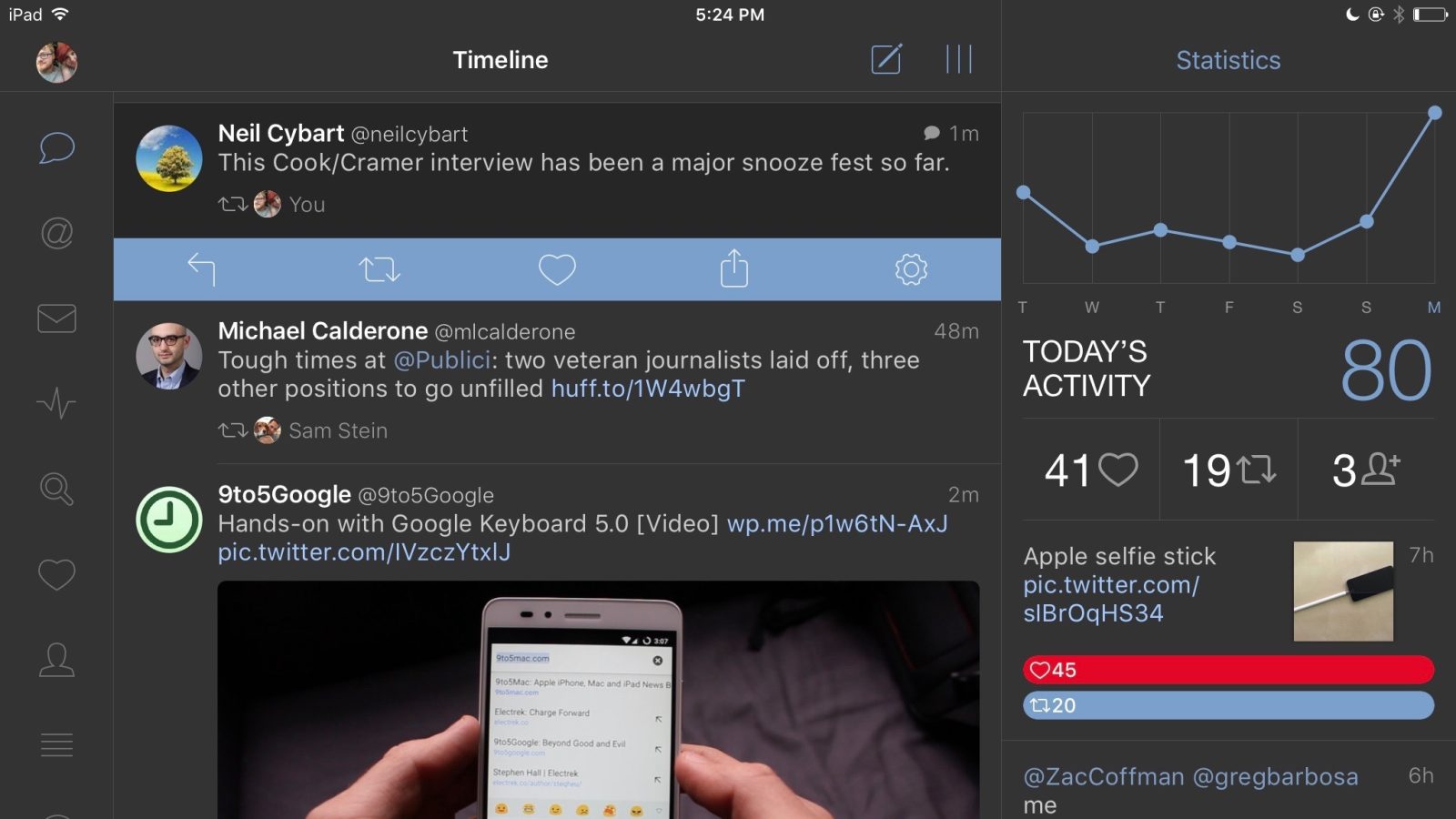 Live tweeting aficionados and tweet storm lovers may welcome Tweetbot’s latest update for iOS, and coming soon to the Mac. The app has introduced ‘Topics’, an intuitive way to link tweets together with an optional hashtag without having to reply to each one of your previous tweets. A very small, but welcome feature for those who find themselves easily surpassing Twitter’s 140-character limit.

Jack Dorsey already confirmed that Twitter isn’t increasing its social network’s character limits past 140 anytime soon, but that hasn’t stopped others from attempting to find ways around these limits. The most widely used method is in creating “tweet storms” where tweets are organized numerically (ex: 2/6 or 2/?). This sets the idea that a tweet may have previous or more incoming tweets related to the same message. Users could take this a step forward by replying to the previously numerically marked tweet, creating a simple to follow stream of all the tweets. Say you load Twitter and see someone tweeting and they’ve appended “6/?” at the end of the tweet, you could easily catch up by moving into your Twitter client’s conversation view and see all the previous tweets “chained” together.

So the title Battlefield 1 is official at least… #Battlefield

An example of tweets linked together using the new Tweetbot Topics feature. It’s indistinguishable from normal tweet chaining methods, and works beautifully alongside Twitter’s own embeds.

The use of tweet storms is contested for a multitude of reasons, but its simplicity and effectiveness within a limited platform can’t be understated. Tweetbot’s 4.3 update today introduces a new methodology making the creation of tweet storms and live-stream tweeting significantly easier. When creating a tweet, or replying to a previous one, users can set a tweet “topic” that Tweetbot will automatically link to the previous tweet and add an optional hashtag. No longer having to numerically catalog each tweet, or even manually replying to a previous tweet, a user could easily continue a slew of tweets all revolving around a single topic.

Personally, I know I’ll be using this feature with the optional hashtag, especially during live keynote streaming events. Tweetbot allows users to not only mute users, but also tweets with specific hashtags. I like to imagine that some of my followers appreciate the live tweets that I do during these big events, but I’d still like to give them the ability to quickly mute these topical tweets if desired. Adding the optional Topic hashtag within Tweetbot when going on these live stream tweet storms should help ease any potential headaches for them.

Tweets that have been linked together using Topics

Topics are all stored in iCloud as well, meaning you can start the tweet storm on your Mac, and then switch over to an iOS device if and when desired. The current Tweetbot for Mac application has yet to receive the Topic support, but a release is expected to hit the Mac App Store soon. Users of Tweetbot 4 on the iPad now also have the ability to hide the extra side column if they so desire. The full release notes for Tweetbot 4.3, with its controversial GIF pronunciation, can be seen below.

This release introduces Topics. A Topic is a way to let you quickly Tweet a group of related Tweets without having to manually reply to yourself and/or manually add the same hashtags over and over again. They are really great for rapid fire live Tweeting events.

You can access Topics by tapping the gear menu in the Compose screen. They are also stored in iCloud, so you can start a topic on your iPhone and easily continue it on your iPad and soon Mac.

– You can now hide the extra side column on the iPad – Much better support for hardware keyboards, including using arrow keys to navigate the timeline – iPad images are no longer super huge – You can paste images when composing a Tweet, really useful when using GIF (with a hard G) keyboards – Support for Arabic language, including Right to Left UI – Muting a user you don’t follow will now also prevent Tweets from that user from showing up in your Mentions, Lists and Searches – Support for Twitter Collections – Quoting a Tweet looks much nicer when composing a Tweet – Support for Firefox browser – Improved support for uploading video to Twitter