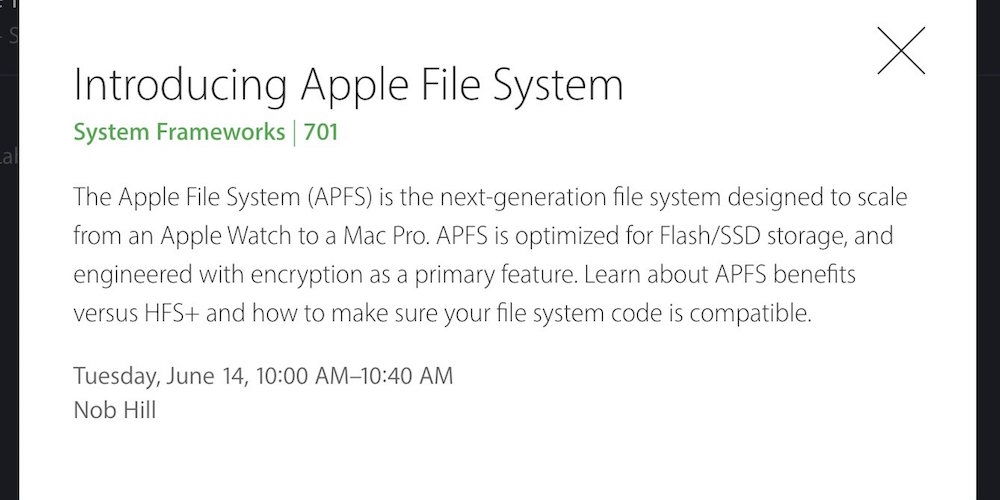 Although it didn’t make the keynote cut, one of the bigger news items for developers today is that Apple is rolling out a new file system for storage for all its products:

The Apple File System (APFS) is the next-generation file system designed to scale from an Apple Watch to a Mac Pro. APFS is optimized for Flash/SSD storage, and engineered with encryption as a primary feature. Learn about APFS benefits versus HFS+ and how to make sure your file system code is compatible.

Details are scant but developers can access information about the new File System here, but it comes with some significant caveats/limitations which will initially limit its usage:

The File system isn’t Open Source at this time and Apple isn’t quite saying if it will eventually Open Source the File System. Apple plans to document and publish the APFS volume format when Apple File System is released next year.

HFS+ and it’s predecessor HFS are more than 30 years old. These file systems were developed in an era of floppy disks and spinning hard drives, where file sizes were calculated in kilobytes or megabytes. Today, solid-state drives store millions of files, accounting for gigabytes or terabytes of data. There is now also a greater importance placed on keeping sensitive information secure and safe from prying eyes.

A new file system is needed to meet the current needs of Apple products, and support new technologies for decades to come.

The following sections describe the general characteristics of Apple File System, as they relate to functionality in the HFS+ file system:

A container is the base storage unit for APFS. It generally maps 1:1 to GUID Partition Table (GPT) entries, and manages its own space allocations and crash protection scheme. Each container exports one or more volumes, or file systems, each of which have their own namespaces, or sets of files and directories.

Note: Apple File System does not directly implement software RAID, however APFS can be combined with an Apple RAID volume to support Striping (RAID 0), Mirroring (RAID 1) and Concatenation (JBOD). APFS can also be used with direct-attached hardware RAID solutions.

APFS supports 64-bit inode numbers, which improves upon the 32-bit file IDs supported by HFS+. As a 64-bit file system, APFS supports over 9 quintillion files on a single volume.

APFS has an expansive block allocator, allowing for arbitrarily large storage on a single device. When initializing very large disks, the block allocator may lazily initialize its data structures only as necessary to improve performance. HFS+, by comparison, is limited by its allocation block size and initializes the entire storage of a file system on creation.

APFS supports sparse files, whereas HFS+ does not.

APFS uses a novel copy-on-write metadata scheme to ensure that updates to the file system are crash-safe. This approach also reduces the additional overhead of journaling that occurs with HFS+.

APFS has built-in support for extended file attributes. HFS+ retrofitted this functionality with the Attributes file, a B-Tree that allows the implementation of named forks.

Security and privacy are fundamental in the design of Apple File System.