MacBook Pro Diary: Higher power output turned my Mac into a charging hub for my holiday 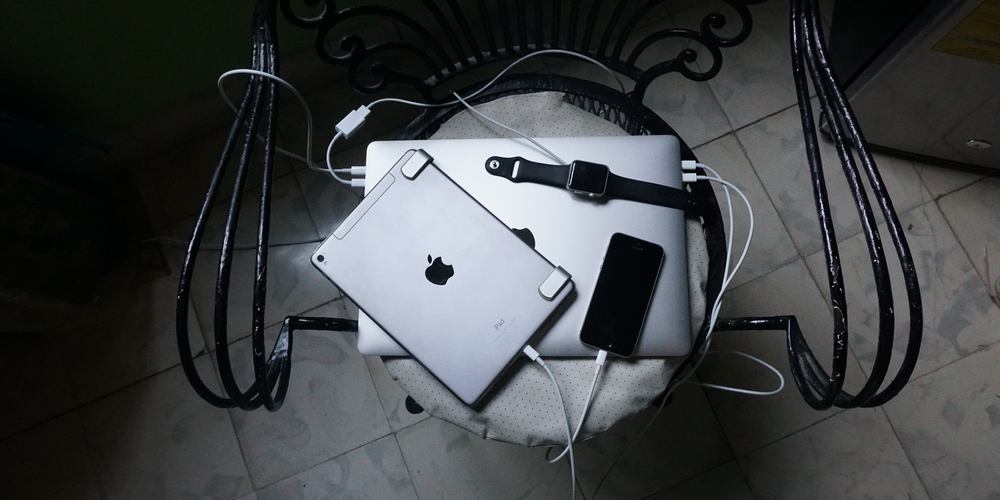 As someone who prefers to travel handbaggage-only, gadgets can often prove a challenge. As I like to keep up with photo editing as I go, I generally travel with my MacBook Pro as well as iPad, iPhone, Apple Watch and a compact camera. Not only do I need space for the gadgets themselves, but also the associated cables and chargers.

Previous model Macs only offered USB 3 ports, which limit available power to 4.5 watts as standard, though one port on some Macs can offer up 5.5 watts. This can make it difficult to keep a complete set of iDevices charged, especially if you’re only sleeping 5-6 hours a night to pack in lots of sightseeing.

But the 2016 MacBook Pro is capable of delivering significantly more power. It can provide 15 watts of power to each of two devices, and 7.5 watts to each of another two. As Apple explains, it doesn’t matter which ports you use – the available power is delivered on a first-come, first-served basis.

A test before my trip showed that this comfortably allowed the machine to simultaneously charge my iPad, iPhone and Apple Watch overnight. It would even charge my Sony a6300 camera, which demands more power than most USB hubs can deliver.

This offered two benefits. First, by eliminating multiple chargers, it made for a much more compact setup: all I needed were a few USB-C cables (plus one dongle for the Apple Watch charger). Second, it meant that everything could be charged from a single power outlet.

The latter fact was particularly convenient on this trip. As we were keen to experience the real Cuba, before the relaxing relationship with the USA resulted in a great many more tourists visiting the country, we were staying in a ‘casa particular’ – a room in a family home. The room was clean but very basic – and not overly equipped with power sockets. (And, to be fair, this is also true of some hotel rooms.)

My setup, shown above, required only a single socket to keep everything charged.

My earlier MacBook Pro Diary posts cover everything from my purchase decision, my take on the criticisms, coming to terms with the non-upgradability and consequent decision to invest in AppleCare, first impressions, temporary dongle hell and a few niggles – but finding my initial impressions were wrong.