‘There is no such thing as absolute privacy in America,’ says FBI Director James Comey 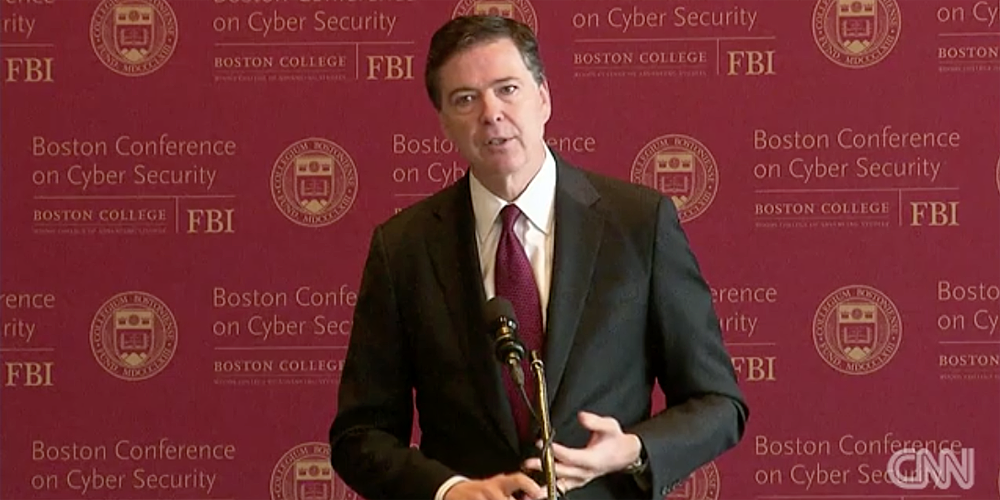 FBI Director James Comey – who has previously attacked Apple for refusing to create a weak version of iOS to allow government access to iPhones – has said that Americans have no right to expect absolute privacy. CNN has a video clip of Comey making the statement yesterday at a Boston College conference on cybersecurity.

Even our communications with our spouses, with our clergy members, with our attorneys are not absolutely private in America […] There is no such thing as absolute privacy in America; there is no place outside of judicial reach …

Comey argued that as a judge had the legal right ‘in appropriate circumstances’ to compel testimony from American citizens on any communication, the same principle should apply to electronic monitoring.

The FBI director last year said that Apple should be legally compelled to created a weakened version of iOS dubbed ‘GovOS’ to allow the government to access iPhones. Apple fought a court order, resulting in a congressional hearing. While Comey initially argued that this would be a one-off in the San Bernardino shooting case, he later admitted that it would ‘likely’ set a precedent – and went on to say that further litigation was likely.

Comey revealed that the FBI lawfully gained access to 2,800 devices in the last four months of 2016, but was unable to retrieve data from 43% of them.

I’ve argued in the past that assurances of legal processes to determine when backdoors and master keys might be used and of no comfort given the inevitability of such tools getting into the wrong hands. Comey himself tacitly admitted as such when stating that he personally puts a piece of tape over the webcam on his laptop, and that his staff routinely use webcam covers.

Only this week, Wikileaks released more than 8,000 documents in support of claims that the CIA had a hacking unit devoted to attacking iOS, Android, Windows and Samsung TVs – and that it had lost control of most of the malware it developed or bought.