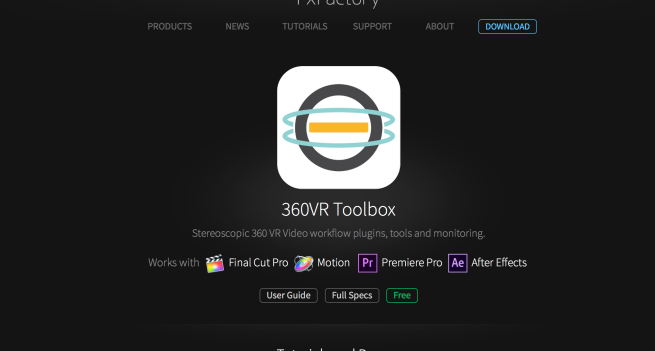 Tim Cook and other Apple executives have been chatty about the company’s interest in virtual and augmented reality in past months. There have been several reports that Apple is exploring an AR smart glasses product internally.

His new employment was brought to light by the blog FCP.co. Dashwood’s premier software offering was 360VR Toolbox which comprised various filters, utilities and tools to create stereoscopic 3D videos, and sold for around $1,000.

The plugin was compatible with Final Cut Pro, Adobe Premier and After Effects. For existing users of the plugin, the news is bittersweet as it means the toolkit is unlikely to see any more feature updates.

However, as a gesture, Dashwood has made the app available to anyone as a free download (as well as the rest of his company’s software).

It remains to be seen whether Apple will integrate the same ilk of VR features into future versions of Final Cut Pro. Dashwood may have been hired to work on FCP, join Apple’s augmented reality team, or some other job in the company.

Apple’s efforts with augmented reality are still largely unknown and it seems any AR-oriented consumer hardware is years away.

However, the iPhone 8 may debut with some AR technology this year; the front camera is expected to include 3D depth-projection sensors which will enable some virtual reality features.