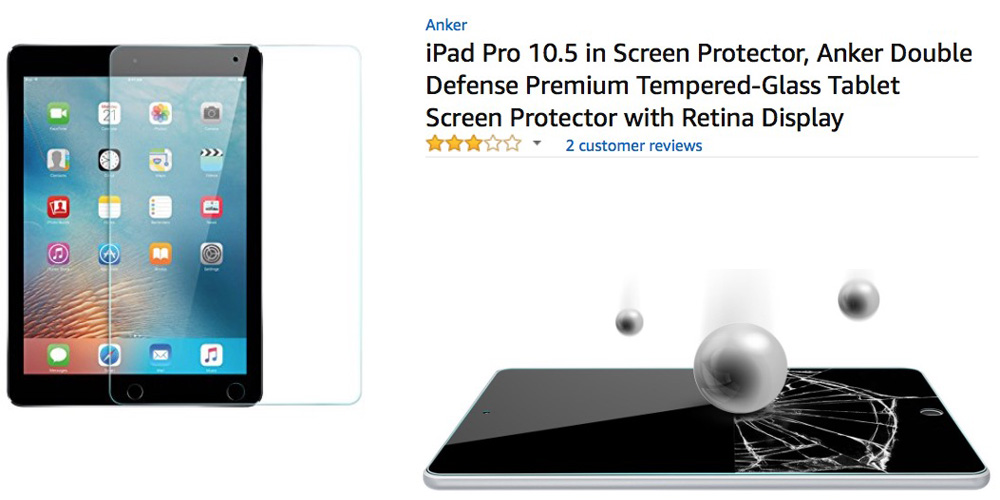 The evidence for a 10.5-inch iPad Pro being launched at WWDC keeps building. We’ve seen a stock reference to a UAG case citing June availability, got a hands-on with a Pelican one, seen photos of several others – and now an Amazon ad has appeared for an Anker screen protector for the as-yet unannounced device.

One buyer said they bought it ready for the release of the anticipated new iPad.

I ordered this screen protector in advance so that I’d be ready when the new iPad Pro 10.5 in. is released […] I’ll post an update once I actually put it on the new iPad. In the meantime, if you’re looking for something to protect your new iPad as soon as you get it, this looks like a winner.

The second customer appears to have mistakenly bought it for an existing 9.7-inch model.

The images and leaks to date suggest that the new iPad will be very slightly larger than the 9.7-inch iPad Pro in both width and height, but slimmer bezels will allow it to accommodate the larger display. Case holes match the stereo speakers found in the existing 9.7-inch model, and the repositioned microphone holes match those on the recently-launched $329 iPad.

The new iPad is expected to be announced during a keynote presentation scheduled for the first day of WWDC on June 5.