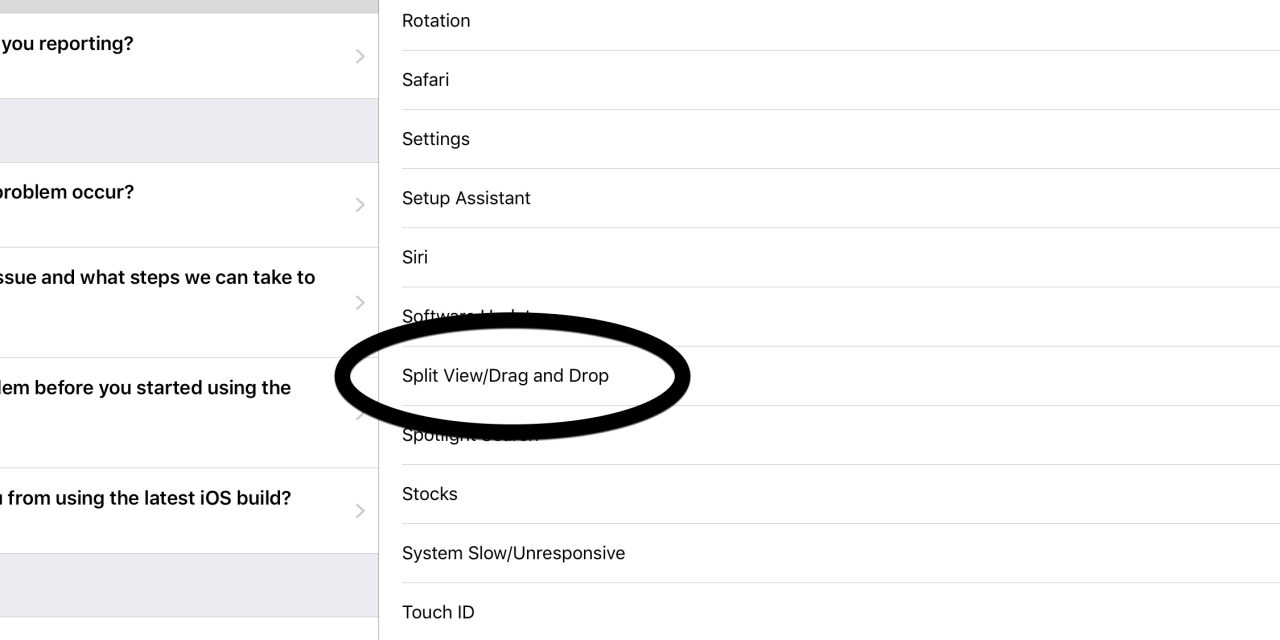 It seems the best place to find last-minute leaks is Apple itself. Earlier today, a listing for a new iOS 11 app, ‘ Files’, was found in the App Store. The Feedback app has also spilled the beans on another feature, confirming that Drag and Drop will be coming to the iPad with iOS 11.

‘Split View/Drag and Drop’ is listed as one of the available preset options that beta testers can use to report bugs. Obviously, this addition has been made a little prematurely as the company won’t be announcing iOS 11 officially until its keynote in about 8 hours from now.

Given that the Drag and Drop reference is part of Split View, the iPad side-by-side multitasking mode, the implication as to what this means is clear:

In iOS 11, users will be able to copy bits of content from an active app on the left side of the screen to the other app simply by dragging. This will rapidly speed up workflows and reduces the need for fiddly cut/copy/paste operations.

With Files — presumably a modern version of Finder for iOS — and now drag-and-drop on the billing, iPad users should already be excited as iOS 11 looks to make users way more productive than they can be today.

You can even imagine how the two features will be combined where users will be able to navigate their documents in Files and then drag one directly into an email message whilst in Split View.

We would also expect upgrades to the Split View multitasking app switcher although confirmation of that is yet to be spotted on an official channel.

We are anxiously looking forward to Apple demoing this feature for real on stage later today. In coordination with the software improvements for iPad, we are also expecting a new 10.5-inch iPad Pro to be unveiled. The WWDC keynote kicks off at 10 AM PT. 9to5Mac will bring full coverage of all the announcements as they happen.

Just in case you wanted another iOS 11 spoiler (this is an option in the Feedback app when filing a bug) /via @charavel pic.twitter.com/mQVlJjZbb4