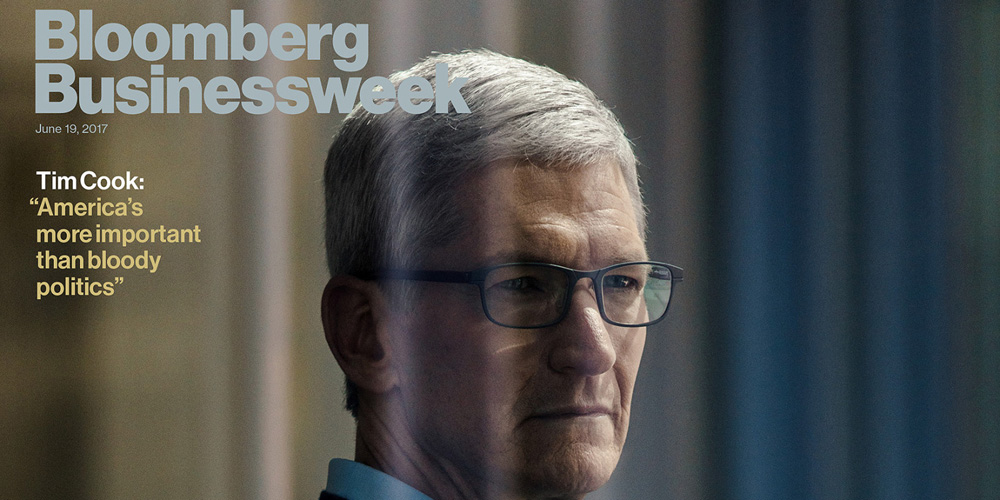 In a wide-ranging interview, Tim Cook has spoken about Steve Jobs‘ DNA as Apple’s ‘Constitution,’ why he thinks HomePod will be a success, wanting to ‘scream’ in excitement about augmented reality, how he thinks taxes should be applied to repatriated overseas earnings, his experience of working with Donald Trump and how he responds to the view that Apple is no longer an innovative company.

Asked by Bloomberg Businessweek editor Megan Murphy what he thought his legacy would be, he said that Apple was all about the legacy of Steve Jobs – and always would be.

Cook said that while change is inevitable, these things should remain constant.

It’s like the Constitution, which is the guide for the United States. It should not change. We should revere it.

Apple’s CEO said that Apple had focused more on music than Siri with HomePod because using Siri at home is nothing new.

Today, pre-HomePod, I can control my home using Siri through the iPhone. When I get up in the morning, my iPhone is my alarm clock. I say, “Good morning,” and all of a sudden my lights come on […]

We’re also in the home through Apple TV [as well as iPad and Mac]. The thing that has arguably not gotten a great level of focus is music in the home. So we decided we would combine great sound and an intelligent speaker.

Challenged on reactions to the $349 price, Cook was unconcerned, pointing to the fact that people said that the iPod, iPhone and iPad were all too expensive when they were announced.

Cook said that augmented reality was so exciting that he wanted to scream. He didn’t say much about what Apple had planned, saying that the company was giving developers the tools to create amazing experiences.

I am so excited about it, I just want to yell out and scream. The first step in making it a mainstream kind of experience is to put it in the operating system. We’re building it into iOS 11, opening it to ­developers—and unleashing the creativity of millions of people. Even we can’t predict what’s going to come out.

The one specific he did mention was changing the whole experience of how you shop for furniture and other things.

Cook argues that Apple will make gains in enterprise because businesses are ‘a collection of consumers’ and the most forward-looking execs saw the value in keeping employees happy by giving them the devices they most want to use.

If you give them a choice, they’ll say, “I want an iPhone” or “I want a Mac.” We think we can win a lot of corporate decisions at that level.

He also cited the ‘2 million U.S. jobs’ figure claimed by the company, and said that using Swift Playground to help school students learn to code would create many more.

I’d come up with a reasonable percentage. I’d make it required, not something where people say, “Well, I’ll just bring back X.” You get charged, and you can decide whether you want to bring it back or not. But you’re getting charged.

Cook argued that a reasonable percentage would be 15-20%, but in return for the preferential rate companies should not be allowed any deductions – they would pay a flat rate.

On working with Donald Trump, Cook said the two of them have very different views on things like immigration and climate change, but it was important to remain engaged. He did, though, say that he had not actually joined Trump’s council.

We’re dramatically different. I hope there’s some areas where we’re not. His focus on jobs is good. So we’ll see. Pulling out of the Paris climate accord was very disappointing. I felt a responsibility to do every single thing I could for it not to happen. I think it’s the wrong decision. If I see another opening on the Paris thing, I’m going to bring it up again.

At the end of the day, I’m not a person who’s going to walk away and say, “If you don’t do what I want, I leave.” I’m not on a council, so I don’t have those kind of decisions. But I care deeply about America. I want America to do well. America’s more important than bloody politics from my point of view.

Asked to respond to criticism that Apple was no longer an innovative company, Cook gave his standard response – that Apple aims to be the best, not the first, in any given field.

We invest for the long term. We don’t feel an impatience to be first. It’s just not how we’re wired. Our thing is to be the best and to give the user something that really makes a difference in their lives. When you look back in time, the iPod was not the first MP3 player. The iPhone was not the first smartphone. The iPad was not the first tablet. I could go on.

The interview is an excerpt from a longer version that will appear in the June 19 edition of Bloomberg Businessweek magazine.

Check out the videos in the 9to5Mac YouTube channel