Happy 10th anniversary to the iPhone, ‘a revolutionary product that changes everything’ 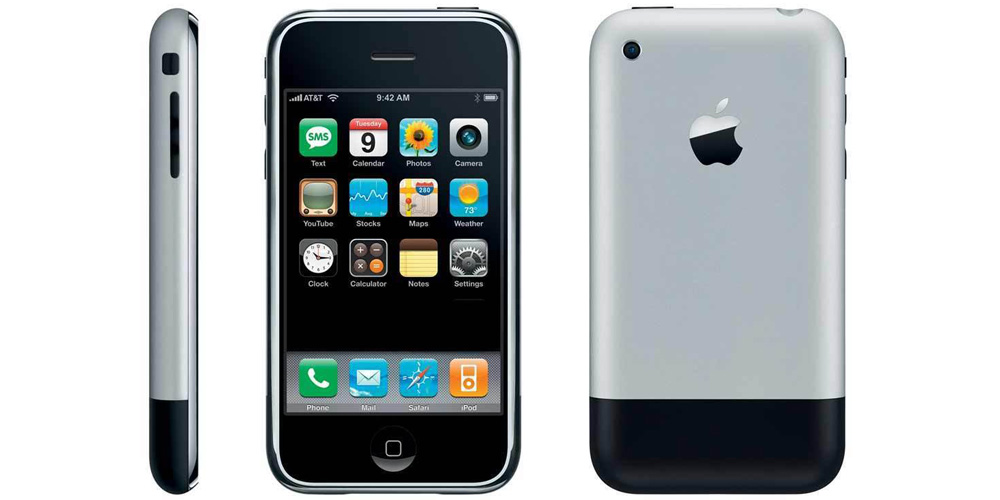 Today is the 10th anniversary of the iPhone, which first went on sale on June 29 back in 2007, and we’re taking a look back at its launch and early reception.

Described by Steve Jobs as ‘a revolutionary product that changes everything,’ he teased that Apple was announcing three products: a wide-screen iPod with touch controls, a mobile phone, and a breakthrough Internet communications device before revealing that it was a single device, called the iPhone …

Steve said that the iPhone was both smarter and easier to use than existing smartphones, which had smaller screens, hardware keyboards and whose touchscreens required a stylus.

In what was by now the signature Apple advertising style, of ads which said little or nothing about the product itself, the first ad appeared during the Oscars – comprising a lot of movie clips of people answering phones before showing the iPhone with a simple ‘Hello … Coming in June.’

Work had begun on the iPhone three years earlier, in 2004, under the codename Project Purple. Steve Jobs revealed during a D8 interview that the company actually started work on the iPad first, but when he saw an early demo of multi-touch and intertial scrolling, he suddenly realized they could use the technology to build a phone.

A phone was a far higher priority than a tablet as the company had already identified smartphones as the product most likely to cannibalize iPod sales.

We’ve recently been hearing more about the story behind the iPhone. Scott Forstall, who headed up the iPhone software team, spoke at the Computer History Museum in Mountain View, California. He and some of the early engineers spoke of what it was like to work on a project in such secrecy.

Forstall, Tony Fadell and Greg Christie gave yet more backstory to the Wall Street Journal, talking about trying 30-40 different ways to use the iPod wheel before giving up on that, and trying countless UI designs before Steve eventually gave them a two-week deadline to create one he liked or have the project taken away from them.

We’ve also seen the launch of a new book The One Device whose subtitle is ‘the secret history of the iPhone.’ The book claims that Apple SVP Phil Schiller insisted that the iPhone needed a hardware keyboard – a claim denied by both Schiller and Fadell.

The first four reviewers to be given the chance to try the iPhone recently got together on CBS to reminisce about that experience. It wasn’t an entirely positive one, as Walt Mossberg recalls.

Steve called me multiple times a day [asking] ‘How’s it going?’ After three days, I was ready to throw this thing out of the window, for trying to type on glass.

But the conclusion of his joint review with Katherine Boehret was positive.

Our verdict is that, despite some flaws and feature omissions, the iPhone is, on balance, a beautiful and breakthrough handheld computer. Its software, especially, sets a new bar for the smart-phone industry, and its clever finger-touch interface, which dispenses with a stylus and most buttons, works well, though it sometimes adds steps to common functions.

You can watch the video review here:

Other reviews were less so …

AdAge headed its review Why the iPhone will fail and said that it ‘will be a major disappointment.’

Bloomberg (now offline) described it as ‘nothing more than a luxury bauble that will appeal to a few gadget freaks.’

TechCrunch ran a piece headed We predict the iPhone will bomb, arguing that battery life and cracked screens would be major issues, and that the ‘virtual keyboard will be about as useful for tapping out emails and text messages as a rotary phone.’

Wired said it was only worth half the price.

There’s no denying the wow factor, but overall the iPhone isn’t worth the money. For $300 I’d give it the thumbs up, but at $600 you’re better off with something else for half the price.

And, of course, there was Steve Ballmer.

But other reviews were far more positive, with MacWorld an example.

The iPhone’s positives vastly outweigh its negatives. It’s a beautiful piece of hardware with a gorgeous high-resolution screen and a carefully designed, beautiful interface inside. The iPhone’s touchscreen keyboard will end up pleasing all but the most resistant Blackberry thumb-typers, making it an excellent device for email. Its Safari browser cleverly condenses full-blown Web pages into a format that’s readable on a small screen. Its iPod features make it a versatile audio player and a drop-dead gorgeous video player. And, yes, it does pretty well at making phone calls, too.

Gizmodo put together a very balanced encyclopedia of a review which recognized the iPhone as the future, advised waiting for a software update and noted some key missing features.

The real elephant in the room is the fact that I just spent $600 on my iPhone and it can’t do some crucial functions that even $50 handsets can. I’m talking about MMS. Video recording. Custom ringtones. Mass storage. Fully functioning Bluetooth with stereo audio streaming. Voice dialing when you’re using a car kit. Sending contact info to other people. Instant friggin’ messenging. Sending an SMS to more than one recipient at a time.

Not forgetting 9to5Mac founder Seth Weintraub’s review for the Telegraph.

I didn’t just want an iPhone, I needed one […] Apple claims its handset will revolutionise the mobile phone market with a breakthrough interface, user-friendly design and superior functions. But is it really worth the hype? On first impressions, yes, but with a few caveats […]

The iPhone interface alone goes beyond the realm of what I thought possible from a small portable device. Is it from the future, this revolutionary pocket computer that will have strangers bashfully asking: “Could I see?” It almost feels that way.

Steve, though, got it completely right: the iPhone did indeed prove to be a revolutionary product, and it did change everything.

What are your iPhone stories? What was the first one you ever owned, and what brought you on board? Do share your experiences in the comments.