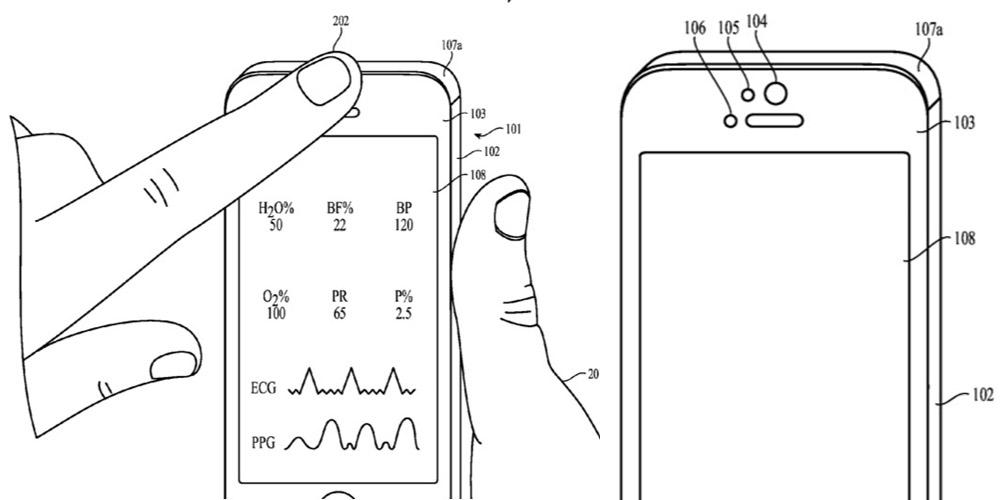 An Apple patent granted today describes how the front-facing camera, light sensor and proximity sensor found in existing iPhones could be used for health measurements.

For example, it describes electrical contacts similar to those found on some more sophisticated bathroom scales to measure body fat. The same contacts could also be used to provide an electrocardiogram (ECG) reading, a technique that’s already been seen in at least one iPhone case.

The total health data that could be captured by the more sophisticated setup is impressive.

The health data may include one or more of a variety of different wellness, fitness, and/or other parameters relating to the health of a user such as: a blood pressure index, a blood hydration, a body fat content, an oxygen saturation, a pulse rate, a perfusion index, an electrocardiogram, a photoplethysmogram, and/or any other such health data.

What’s particularly interesting, though, is how much data could be captured using nothing more than the camera and light sensor: oxygen saturation, pulse rate, perfusion index and a photoplethysmogram (which can monitor breathing rate and detect circulatory conditions like hypovolemia).

While some measurements can be taken using the type of low-tech ambient light sensors used in existing iPhones, the patent does note that more sophisticated ones may be required for optimum use.

As always with Apple patents, there’s no telling which ones the company will choose to actually implement in a real product – and it’s unclear how much room there would be for an electrical sensor in the ‘notch’ design of the iPhone 8 – but there’s no doubting Apple’s keen interest in the health field.