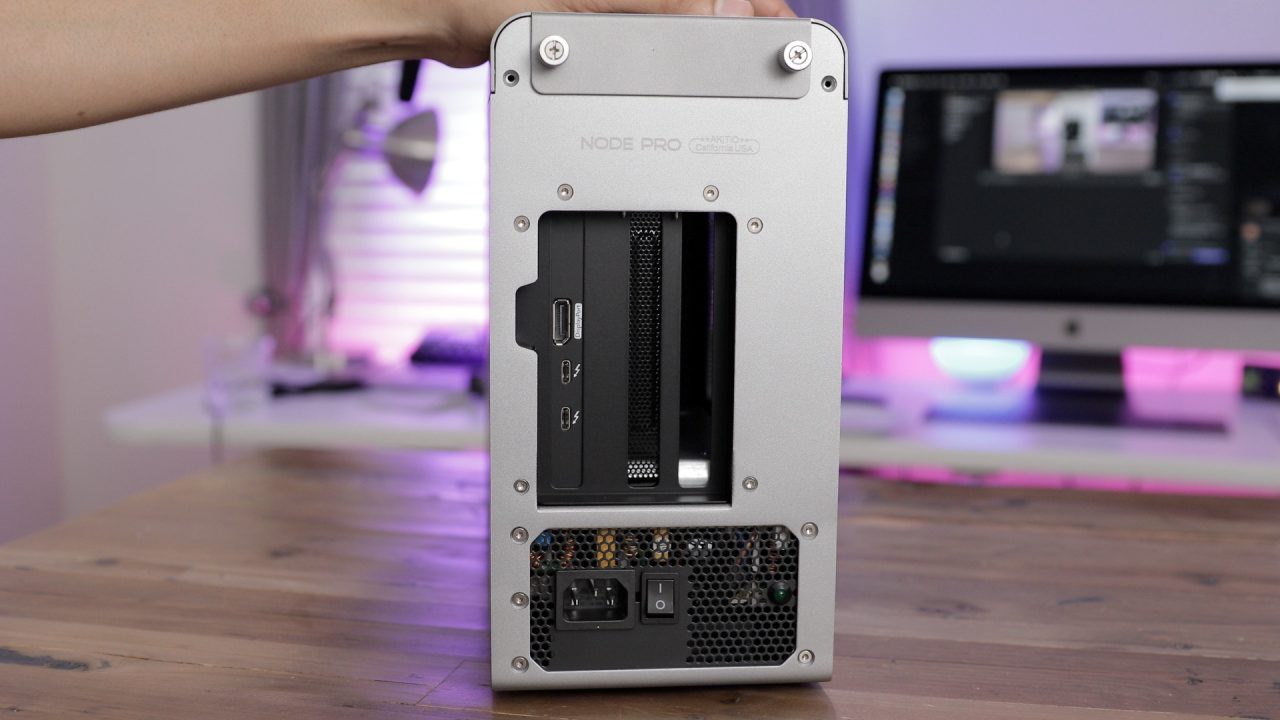 Recently, Akitio launched the latest product in its external graphics Node line — the Akitio Node Pro (currently sold out on Amazon). The result is a more refined external graphics box with a built-in DisplayPort connection, and a second Thunderbolt 3 port for daisy-chaining to other Thunderbolt 3-enabled devices. Watch our hands-on video for a first look the at $360 Node Pro.

The first thing that you’ll notice about the Node Pro is its fit and finish. The black paint that tended to act as a fingerprint magnet is now gone, replaced by a simple aluminum finish. 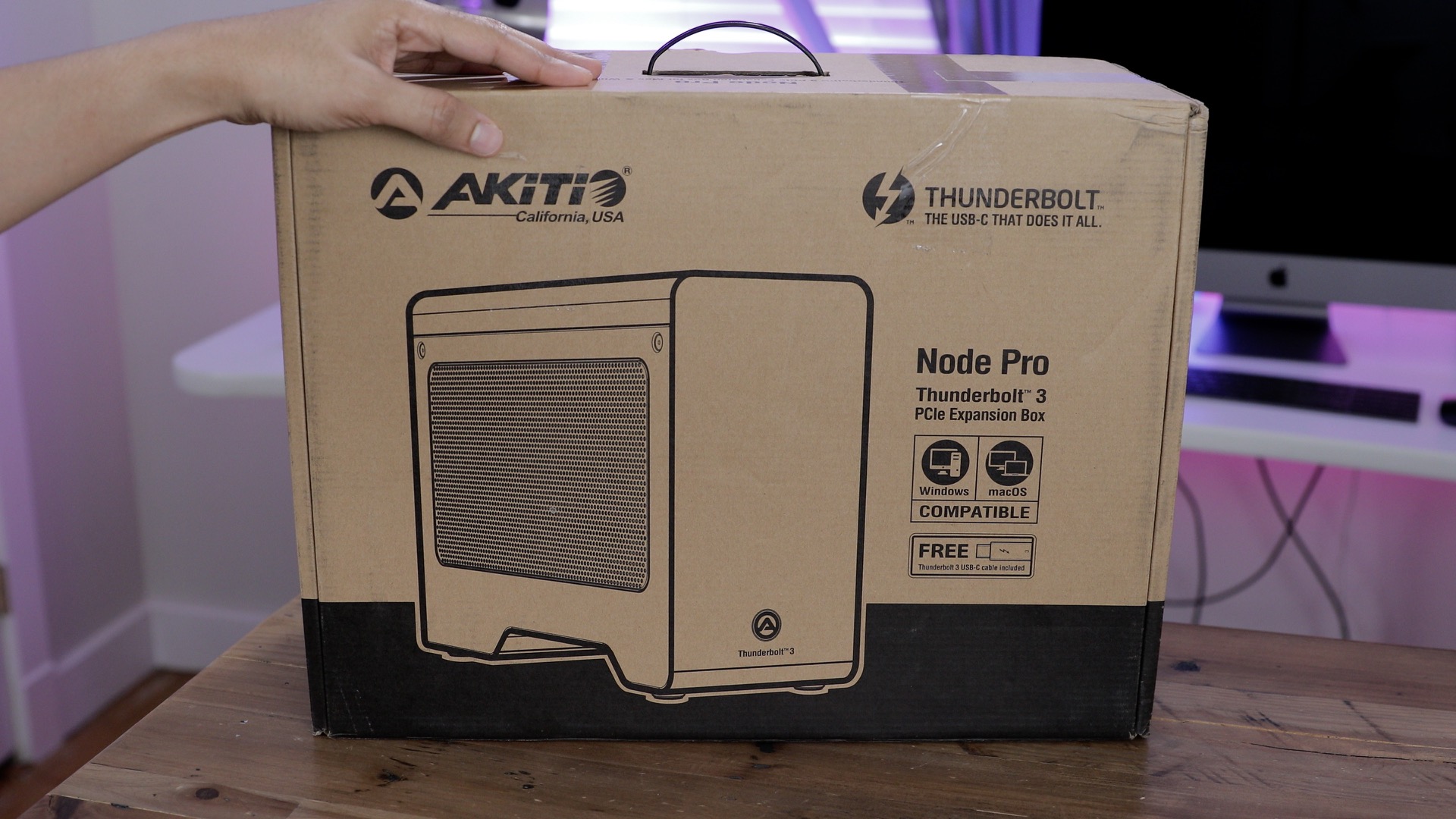 The front of the Node Pro features a clean design with a single aluminum plate devoid of the trademarked perforation found on the front of the original unit. The bottom of the front panel features the familiar Akitio logo, which is illuminated in blue thanks to a strategically-placed LED behind the panel.

You’ll also notice that the Node Pro is taller than the original Node, but it’s also not as long. The updated form-factor provides it with a more balanced stance that’s lighter and easier to carry around. 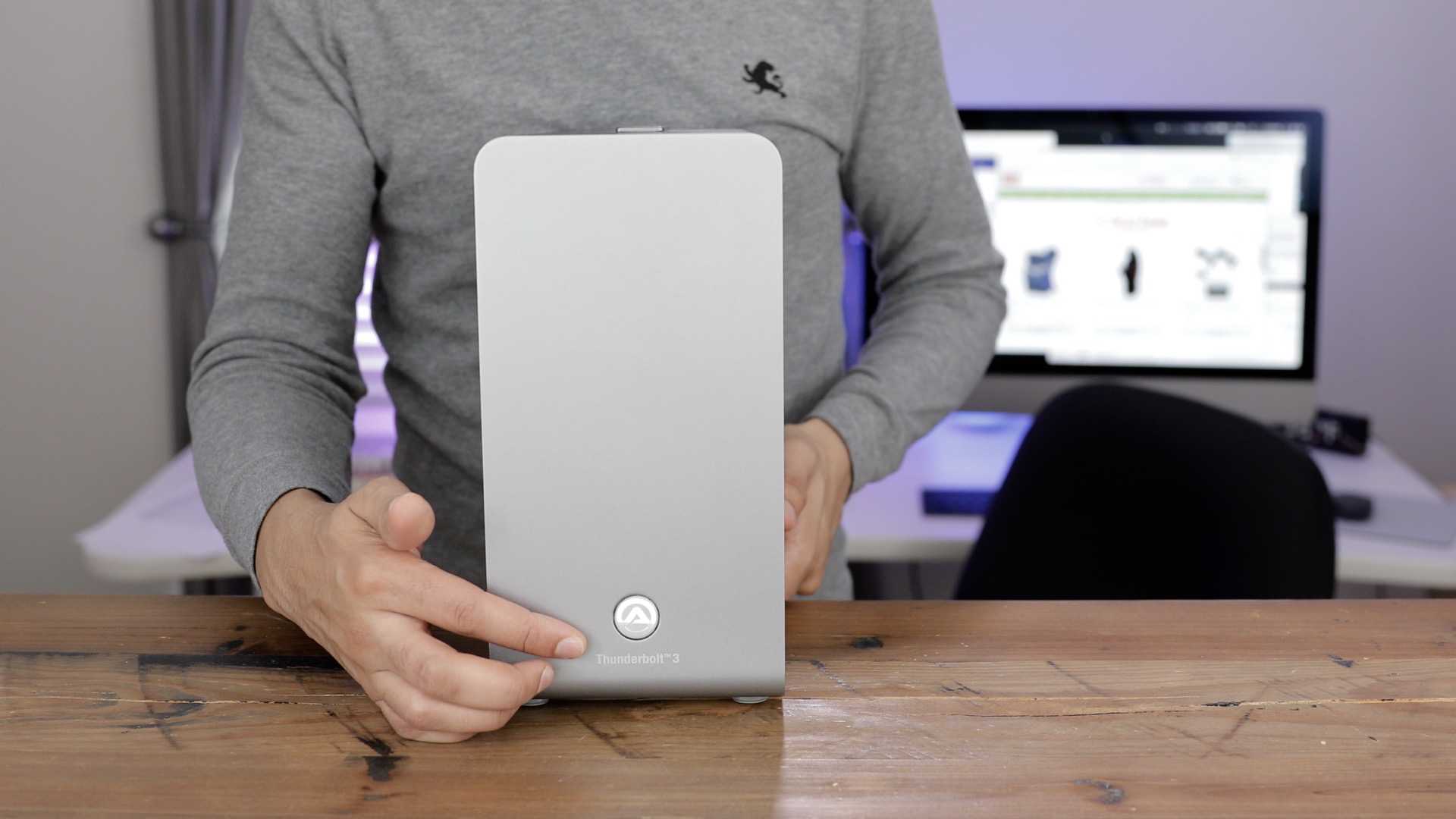 Unlike the original Node, which featured an awkward-to-use handle on the rear of the device, the Node Pro takes a different approach. 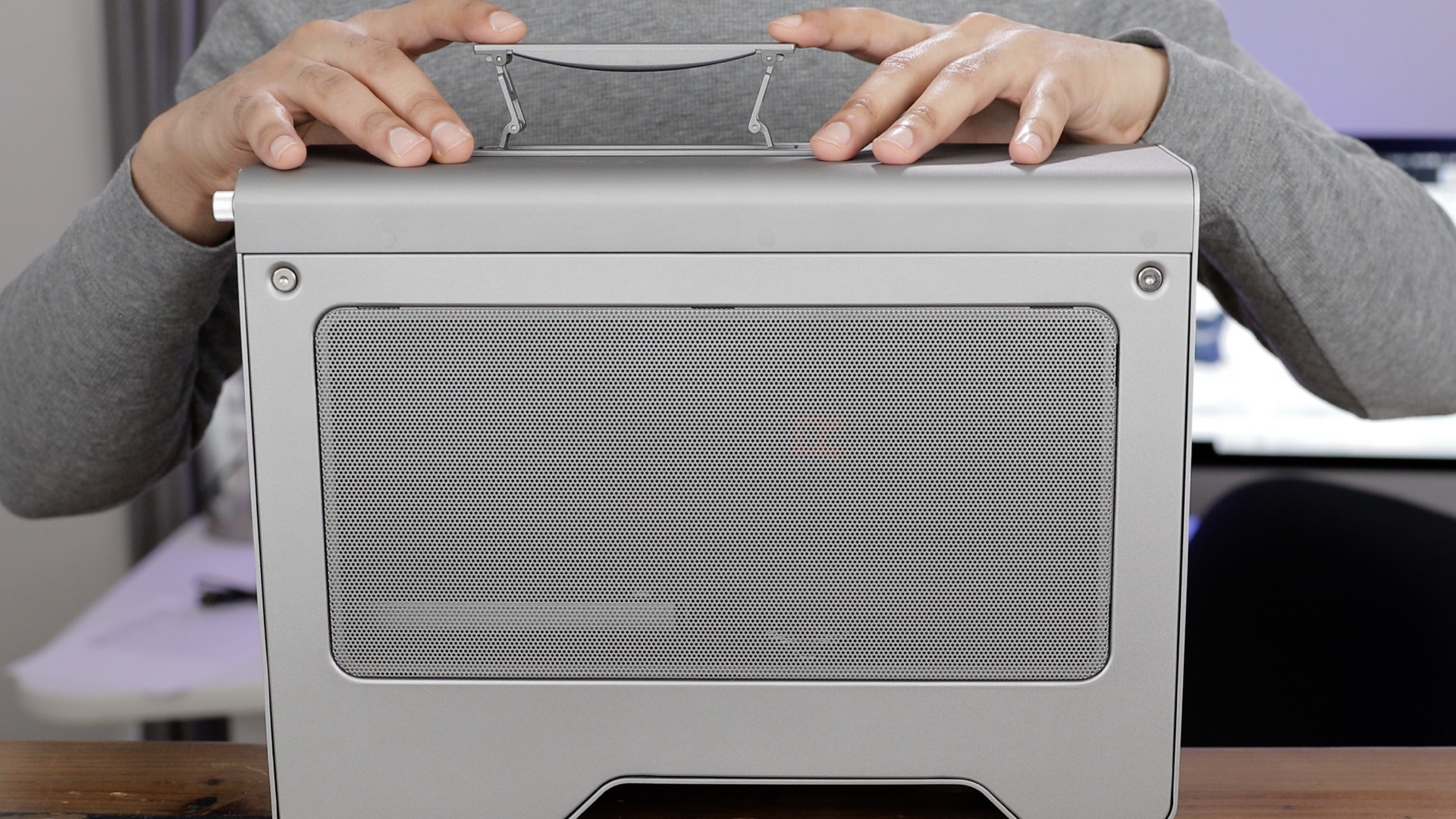 Users who frequently travel with their eGPU box will appreciate the new recessed carry handle located on the top of the device. When not using the handle, simply press down on it to recess it into the top of the unit. 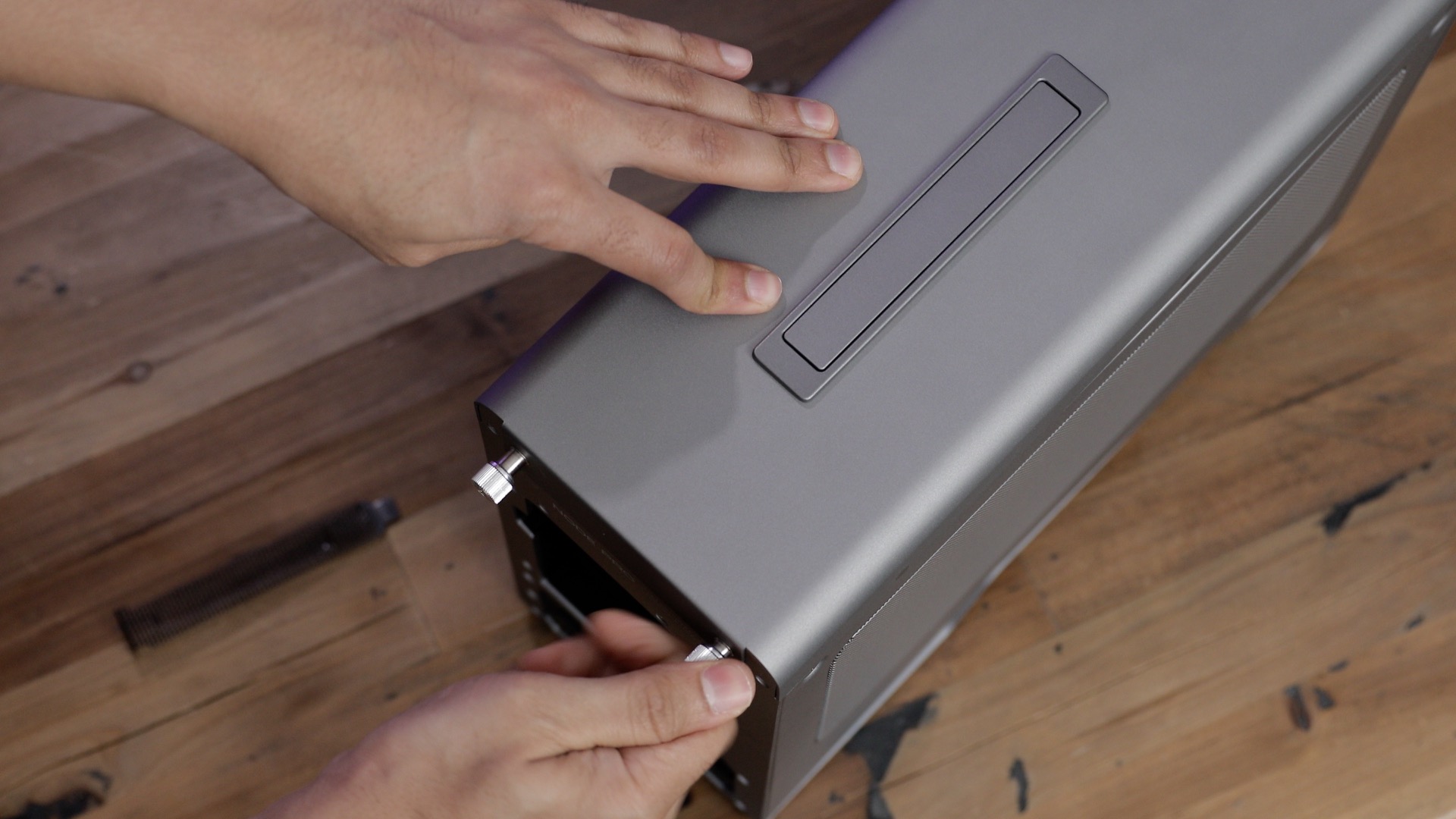 Unlike most external GPU boxes, the Node Pro features no side access port for getting to the GPU inside. The Node Pro partially owes its taller stature to a new top-mounted removable access lid. 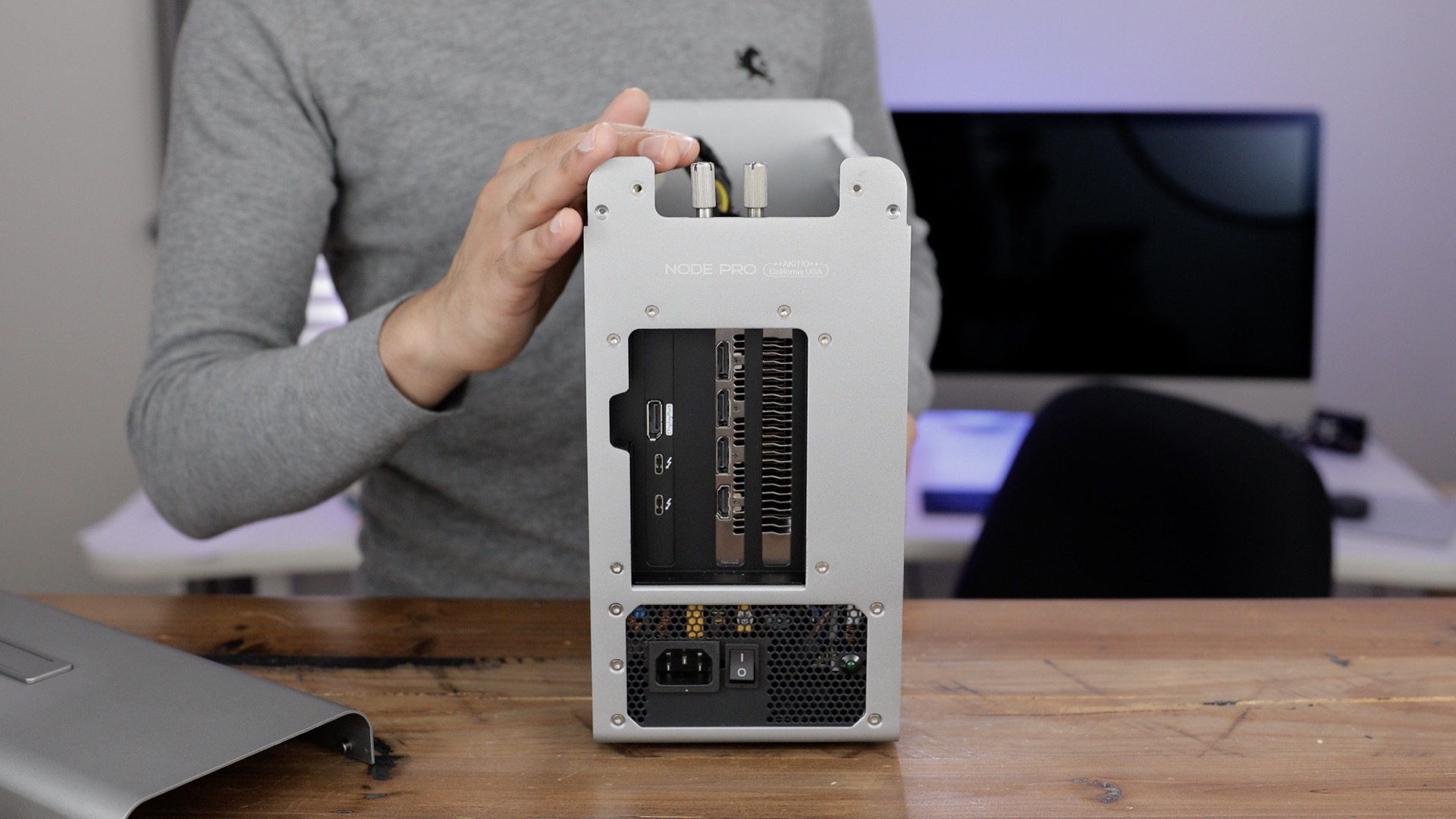 One thing that I’ve always appreciated about Akitio Products is how relatively easy they are to maintain thanks to a liberal use of thumb screws and similar tool-less mechanisms. While the original Node featured thumb screws, the ones found on the Node Pro’s top-mounted access lid are the type that are permanently mounted to the unit, making it impossible to lose or misplace the screws.

Once the screws are loosened, the top lid slides back and lifts off the unit. This reveals a somewhat narrow enclosure containing the PCIe slot and dual 6+2 pin power connectors. 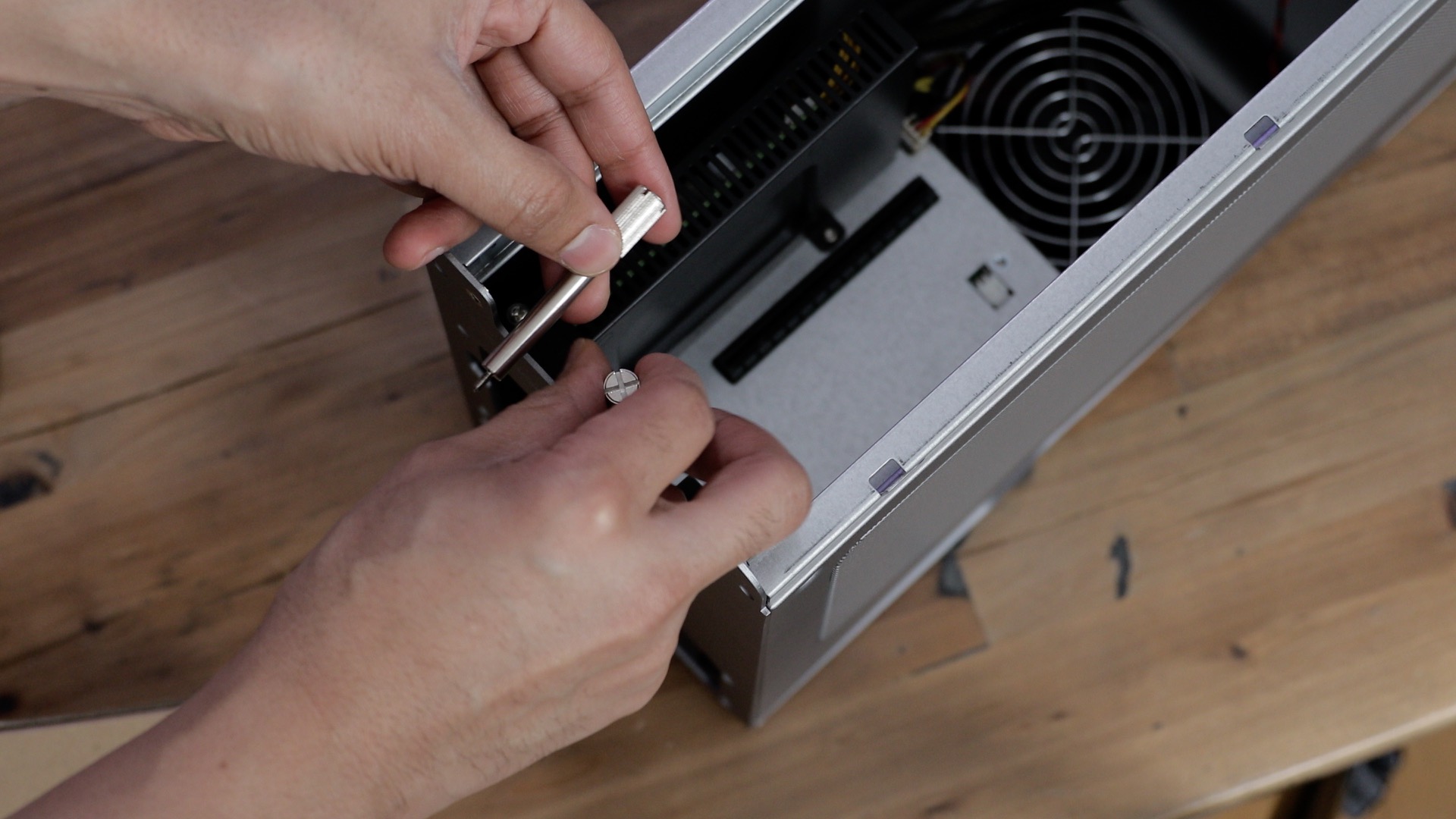 To learn more about the performance of the RX Vega 64 on macOS, be sure to read and watch our eGPU progress report posted last month. 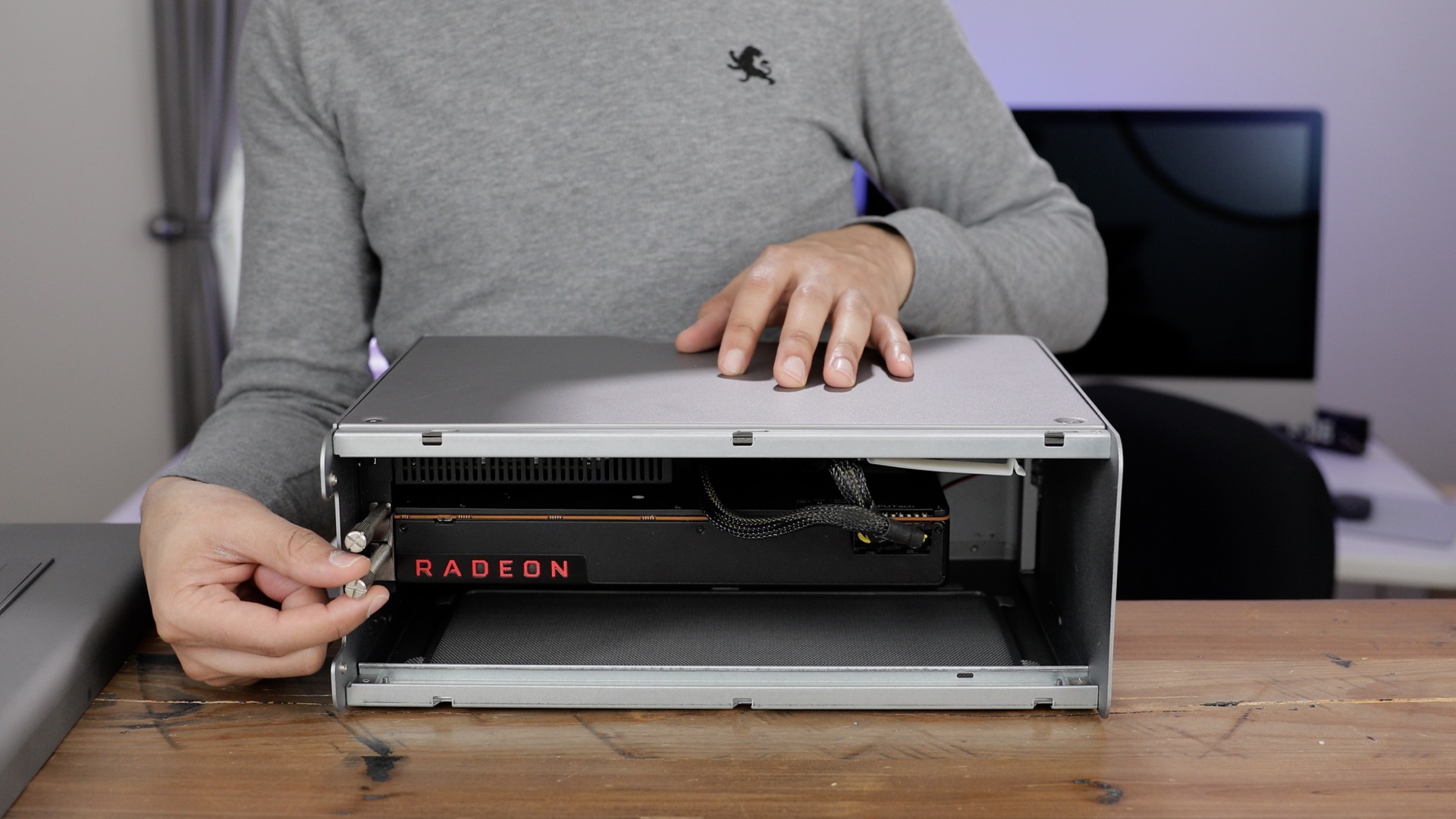 The left side of the Akitio Node Pro features a perforated panel to help dissipate heat from non-reference GPUs with onboard fans. On the bottom of the Node Pro is an exhaust fan that’s housed above a raised area for improved airflow. The PSU fan is also located on the bottom of the device. The result is a unit that should perform somewhat quieter than the original Akitio Node, thanks to its strategic fan placement. 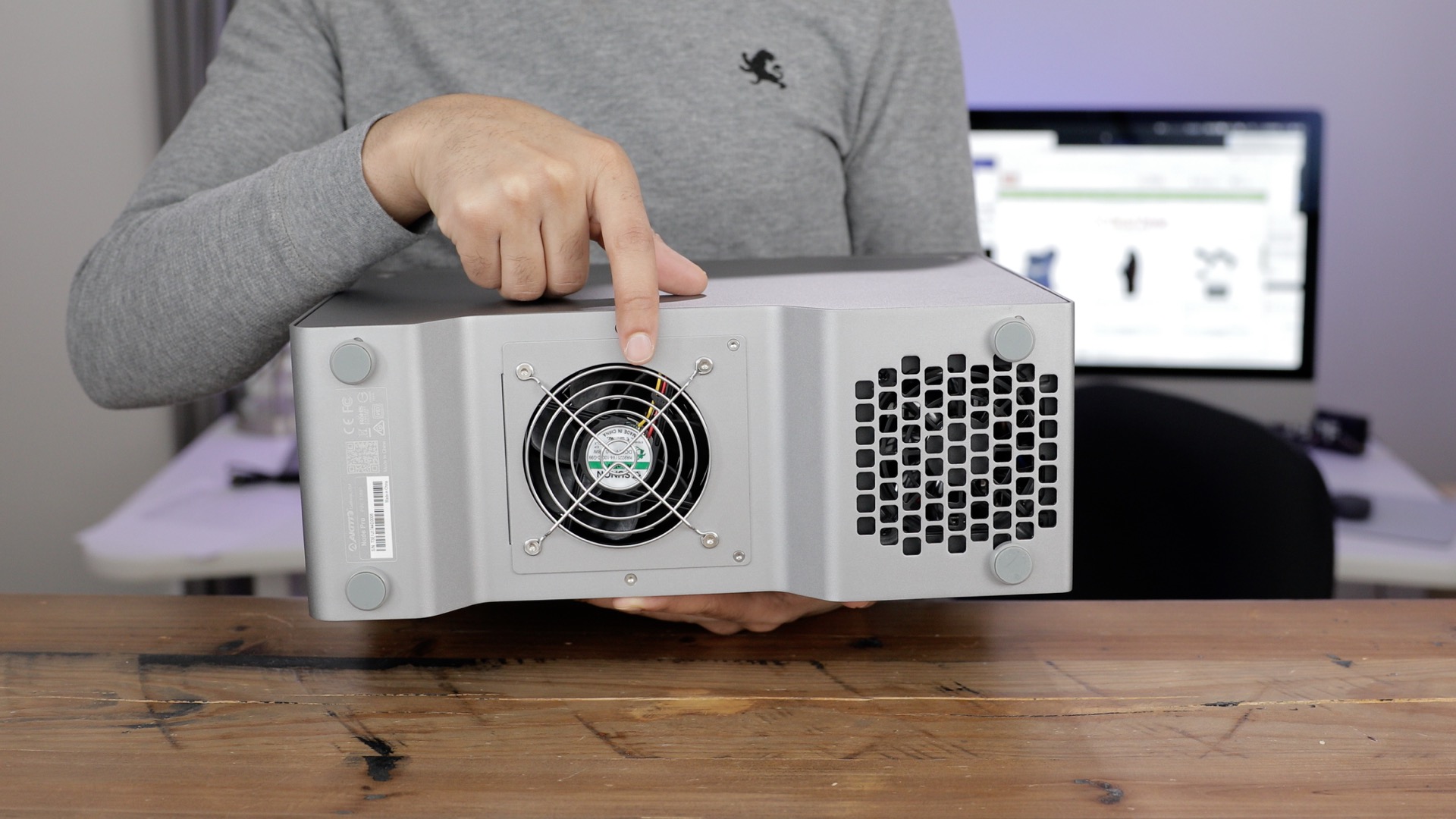 Advantages over the original

The biggest differences between the Node and Node Pro have to do with power and ports. The original Node featured a 400W SFX power supply, while the Node Pro features a more powerful 500W PSU. 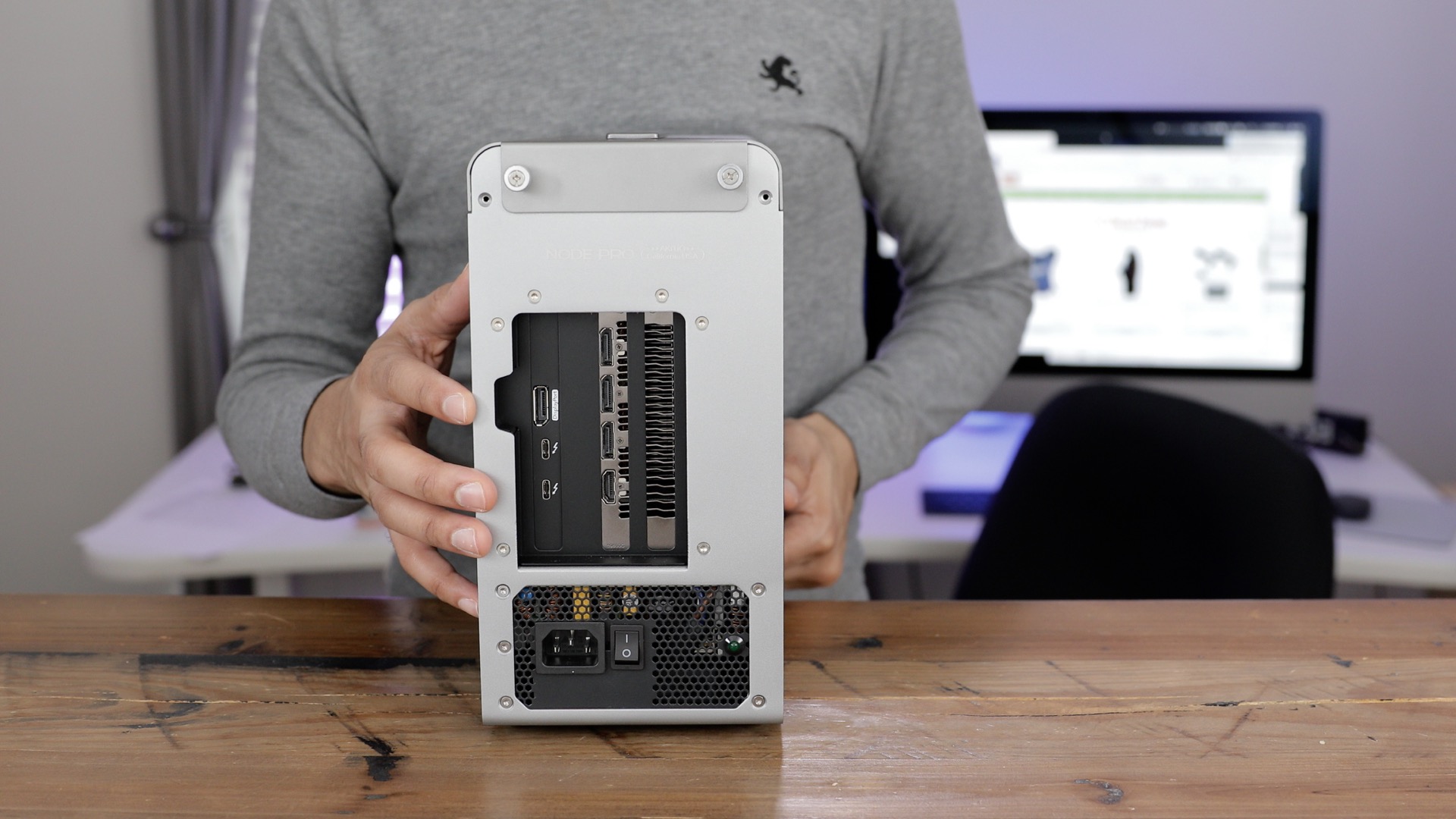 In my testing, I connected the Sonnet Fusion PCIe SSD to the Akitio Node Pro via a Thunderbolt 3 daisy chain. This allowed me to drive the external GPU and access the contents of the SSD with a single Thunderbolt 3 cable connected to my MacBook Pro. Preliminary tests indicate that there is a slight read/write performance dip with the SSD while daisy-chained, but further controlled testing is required.

Both of the Thunderbolt 3 ports on the Node Pro support USB Power Delivery up to 60W, which means that it can recharge a 13-inch MacBook Pro at full speed. The power delivery rating on the Node Pro is actually less than the original Node, which provided up to 75W to an eligible device. Still, 60W is nothing to laugh at, and in most cases will be adequate enough for 15-inch MacBook Pro owners in real-world usage. 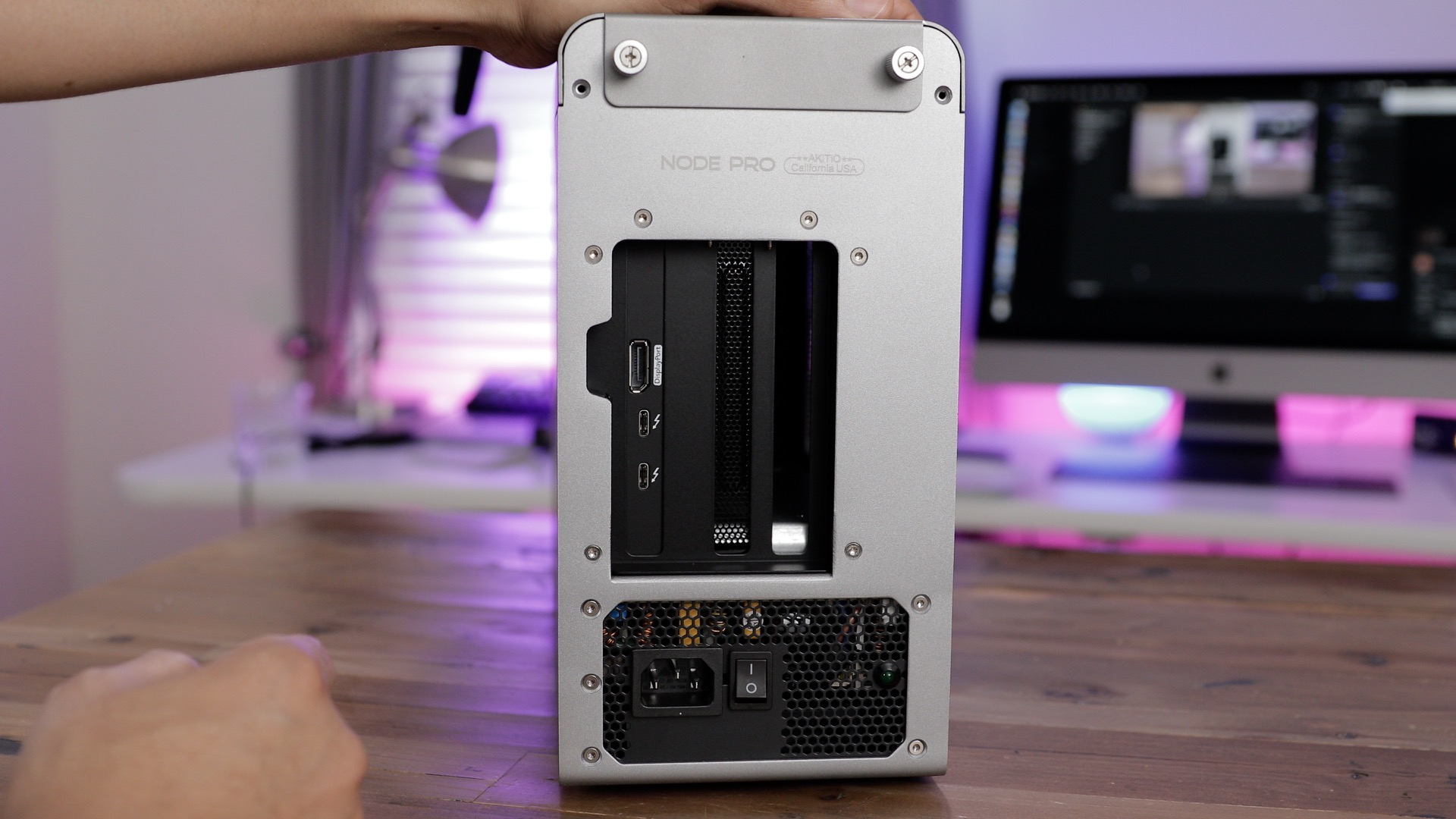 The addition of the extra Thunderbolt 3 port and DisplayPort connection are significant enhancements, but the biggest overall enhancement to the unit is with its fit and finish. The Node Pro is much more refined, and easier to maintain with its easy to access enclosure, tool-less GPU installation, carry handle, and aluminum finish.

Yet, with all things considered, please remember that external graphics support on macOS is still in its infancy. The Akitio Node Pro works with my 13-inch MacBook Pro running the latest version of macOS, but as I’ve documented in previous posts, it’s still very much a work in progress.

The good news is that this spring should mark a major improvement for external GPUs, as Apple has promised that enhancements related to external graphics support will come around then. In the meantime, your mileage may vary, but you can trust that the Akitio Node Pro is a solid effort from one of the original players in the Mac-compatible eGPU space.

Would you consider using an eGPU with your MacBook Pro? Sound off with your thoughts down below in the comments section.