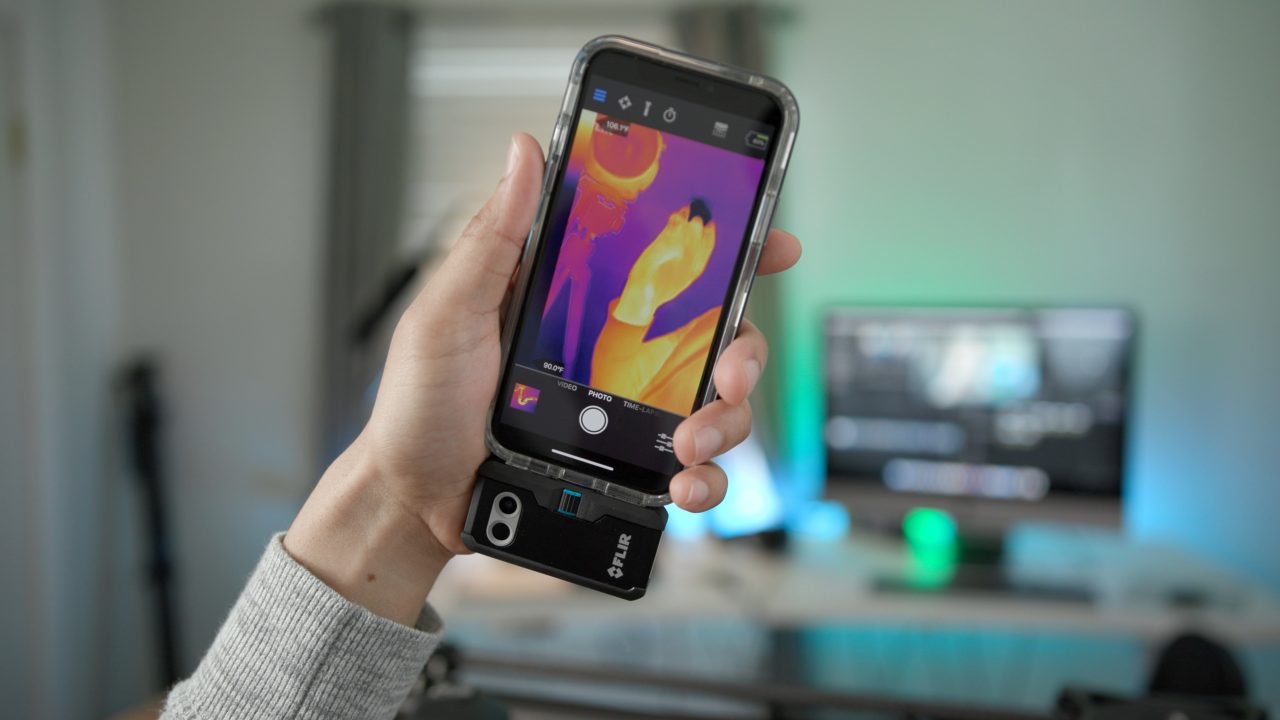 The human eye is amazing, but it’s limited as to what it can see. That’s where imaging tools like thermal cameras can come in handy, allowing you to see and diagnose problems that are normally invisible to the eye. This thermal, or infrared energy, is present in all matter, but because its wavelength is beyond the scope of what the human eye can discern, it’s invisible to us without the necessary tools.

Thanks to modern-day smartphones like the iPhone, these tools are now a lot more accessible to the everyday person. One such example is the Flir One Pro — a portable thermal camera attachment that connects directly to an iPhone’s Lightning port.

If you’re a homeowner, or just someone who’s curious about the type of technology that allows you to see through walls and identify heat signatures like you’re in the movie Predator, then Flir’s One Pro is a mighty-impressive, if not tiny, piece of kit. Watch our hands-on video walkthrough inside for a look at how it works.

Before first use, you’ll need to charge the unit using the included USB-C charging cable. I’m glad that Flir opted for USB-C instead of outdated micro USB, alluding to the overall thoughtfulness of the device in general. 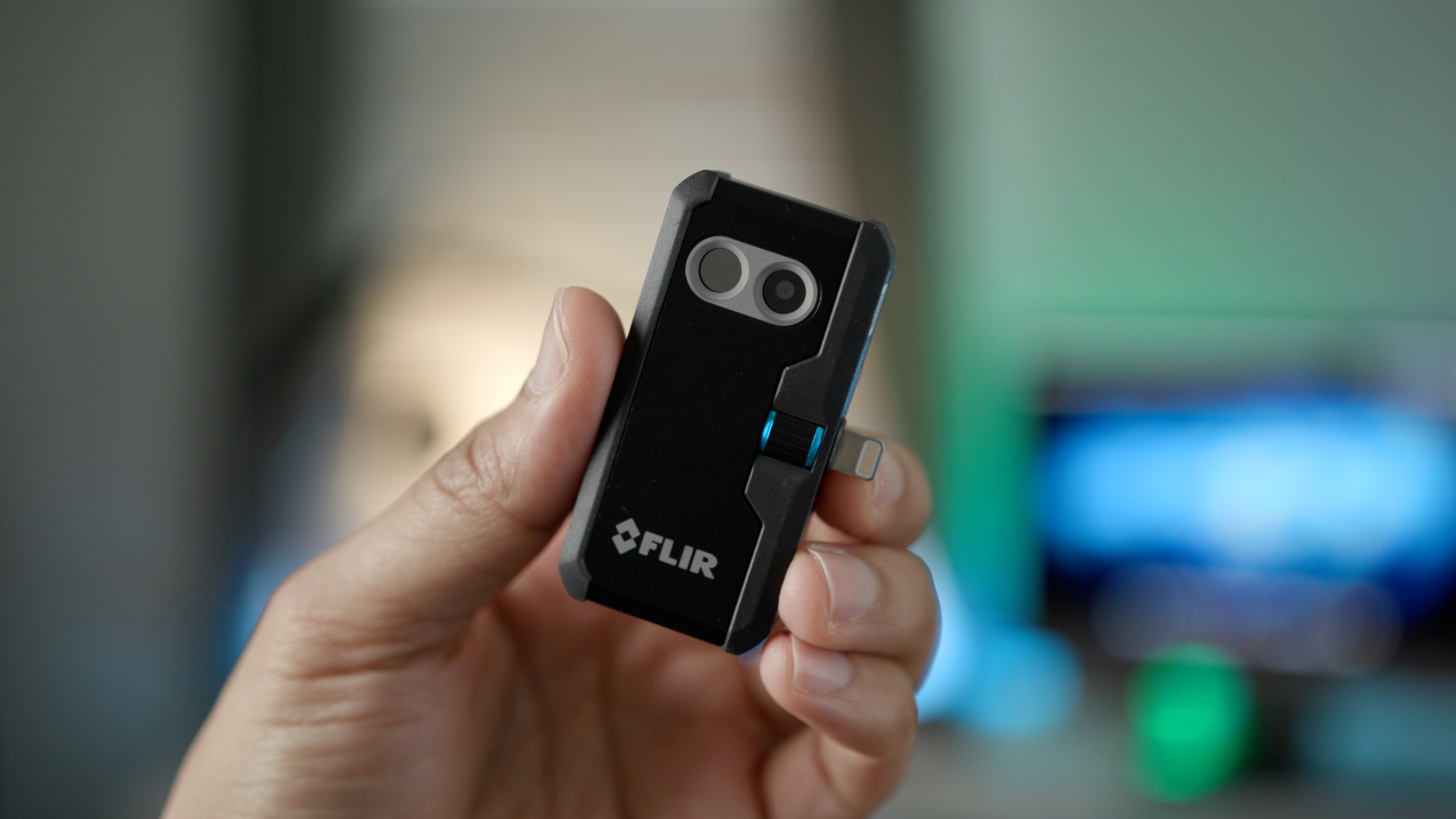 What makes the Flir One Pro a “Pro” product, is its thermal camera resolution. Many higher-end standalone Flir units feature a much lower thermal resolution than the Flir One Pro, which offers a 160×120 image. That may seem pretty paltry compared to regular visible image cameras, but it’s good for a thermal sensor. For comparison, the standalone Flir C3 Pocket Thermal Camera is $700, and it features a resolution of only 80×60 pixels.

The point is, while this thermal image camera may seem weak compared to the types of cameras we’re used to, it’s actually really good. In fact, if you look at many of the thermal cameras offered on Amazon, some, even those costing over two times more than the Flir One Pro, sport a lower thermal resolution.

Using the Flir One Pro app

The Flir One Pro looks simple on the surface, but the cameras coupled with its iOS app transforms your iPhone into a bona fide thermal imaging solution. The app, which is available free on the App Store, contains the interface needed to process the thermal image data taken from the Flir One Pro’s sensor.

Once you power on the Flir One Pro and launch the app, the image from the thermal camera is displayed. Flir’s app is set up like pretty much any other camera app, but there is an additional toolset specifically designed to take advantage of the attachment’s capabilities. 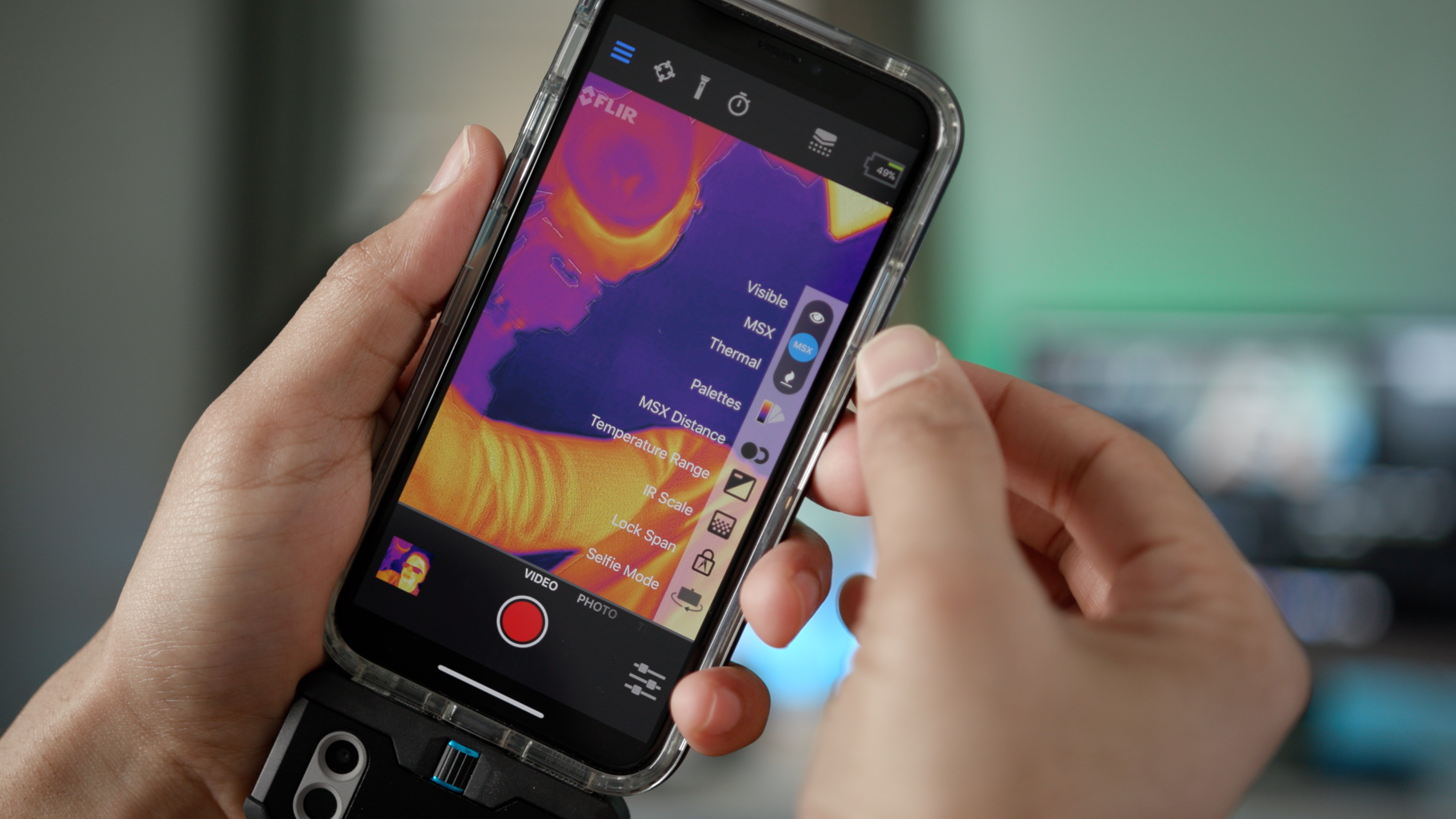 The basic gist of the experience is that it allows you to see thermal heat signatures of objects throughout your environment. These objects can be living, breathing humans or pets, along with inanimate objects like furniture, appliances, and the pipes insides of your house’s walls. The principal is that everything gives off infrared energy, so everything in your environment will have a corresponding heat signature. 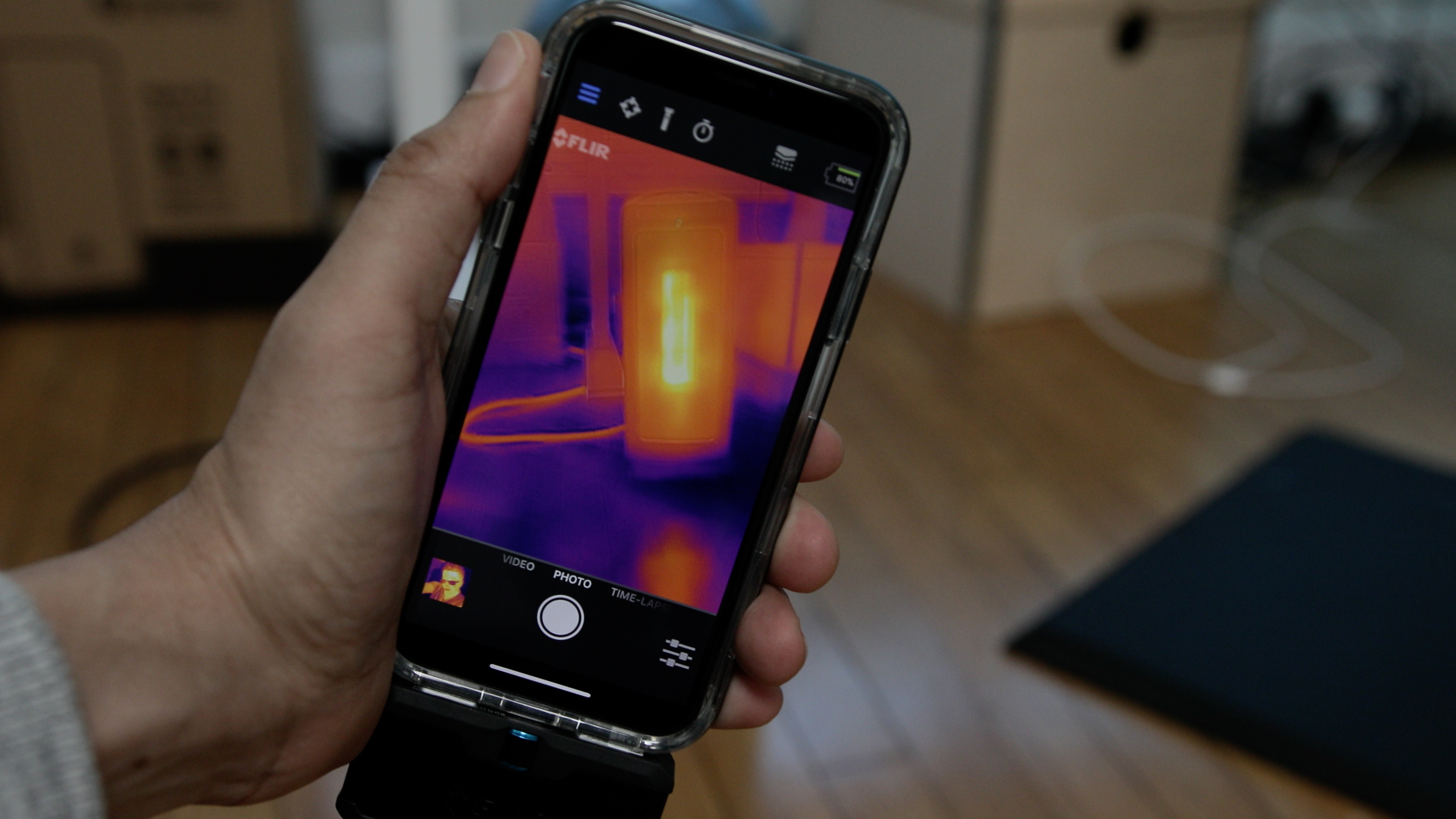 Like many other camera apps, users can take photos, videos, or time lapses, but these include thermal imagery, which obviously makes this app unique compared to others. Photos can be saved directly your photo library, although they are watermarked with the Flir logo in the upper left-hand corner. You know, just in case you forget how you were able to shoot your thermal image.

But that’s just the tip of the iceberg when it comes to the app’s capabilities. The aforementioned toolset, accessible via the settings button in the bottom right-hand corner, lends access to a wide range of additional settings and features. 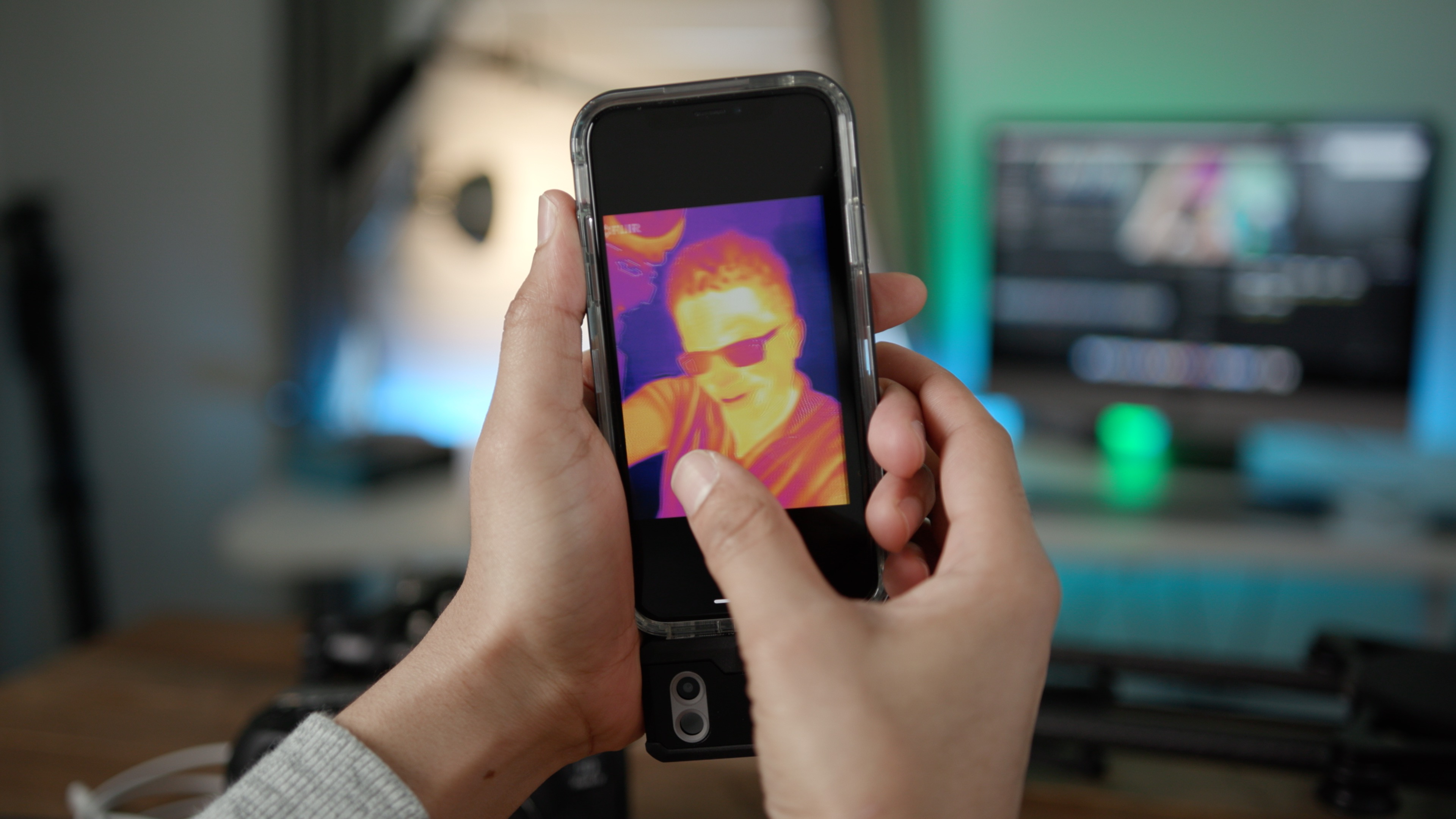 It’s within this toolset area that users can switch between the visible, thermal or the composite MSX image. Users can also go here to customize color palettes associated with different types of heat signatures. These palettes are for more than just looking cool, they can actually allow you to identify certain ranges of heat more quickly. The app even has the ability to display spot meters in Fahrenheit or Celsius on-screen to correspond to the heat signatures generated.

In one particular use case scenario, I wanted to check my bathroom sink, which was draining slowly. Instead of taking apart the pipe to check for obstructions, I simply used the Flir One Pro to confirm that there wasn’t a blockage in the part of the drain outside of the wall. As you might imagine, I found the Flir One Pro to be very useful in that particular case.

I was also able to use the device to identify cold spots in my house that needed more insulation, check my power outlets for overheating, and look for rogue energy vampires. 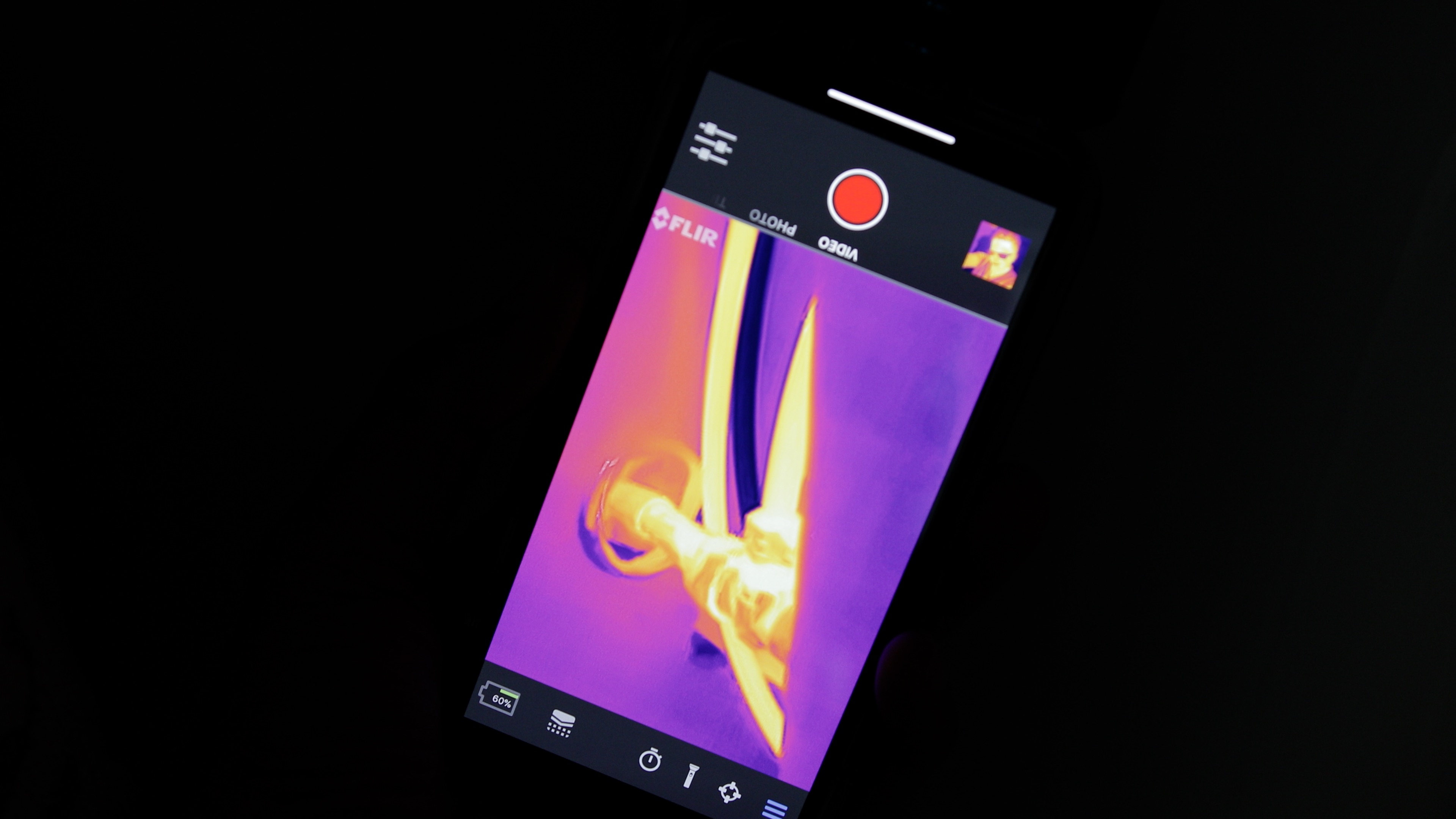 But Flir One is not just for handy work around the house. It can also be used for entertainment value. For instance, I get a kick out of looking at the heat signature of my cat as she walks around the house. Flir has also created specific apps geared towards the creative aspects of the thermal camera, such as the Flir Paint app that allows users to paint and erase the thermal image composed on top of the visible camera data. The app isn’t great, but it at least shows that Flir recognizes the device’s creative potential. 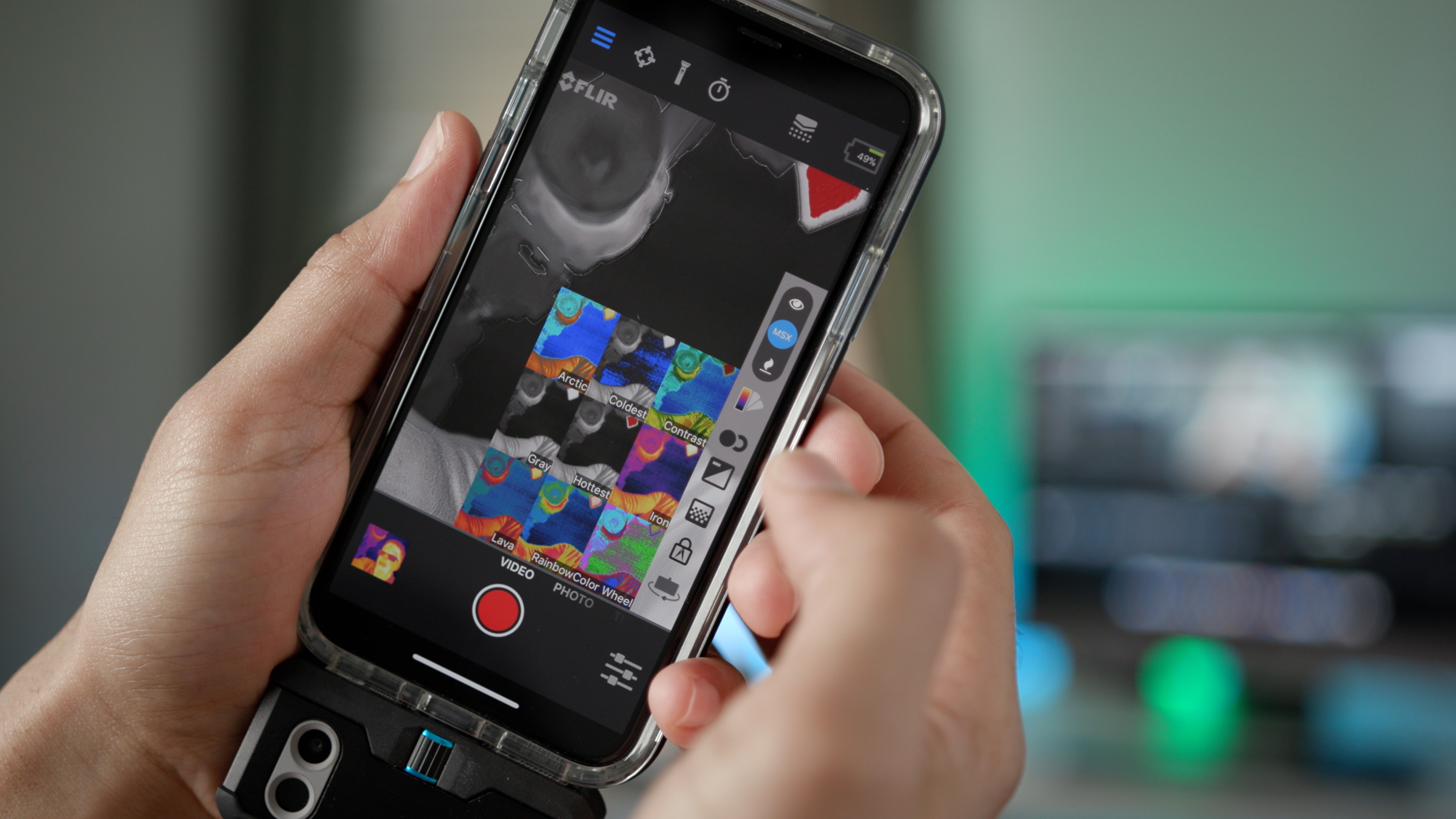 The Flir One Pro is one of those tools that you won’t necessarily use all of the time, but I find it to be extremely nice to have on hand for the occasions when it’s needed. Now you can instantly confirm problems around the house and take action based on your findings. The Flir One Pro puts power into the hands of home owners or anyone else who’s interested in the finer details of their surroundings.

One of the complaints that I’ve seen online is that the Flir App can be slow, buggy and outdated. These complaints are valid to a degree; it’s also far from the prettiest app out there, and it still hasn’t been updated for iPhone X. That said, I found the app to be adequate, and in some cases exceptional, for what it was designed to do.

I find the app, despite its lack of iPhone X support to be quite useable. One thing that may take users some time to get used to is the refresh rate of the camera, or lack thereof. The 8.7Hz refresh rate is much below what you may be use to from your standalone iPhone camera, which lends the viewfinder a laggy display that isn’t good for fast moving subjects.

It should be noted that the 8.7Hz refresh rate is not a technical limitation, but a government regulation. Flir cannot ship thermal cameras oversees that are higher than 9Hz because of ITAR and the fact that it technically a dual-use technology that has commercial and military applications. 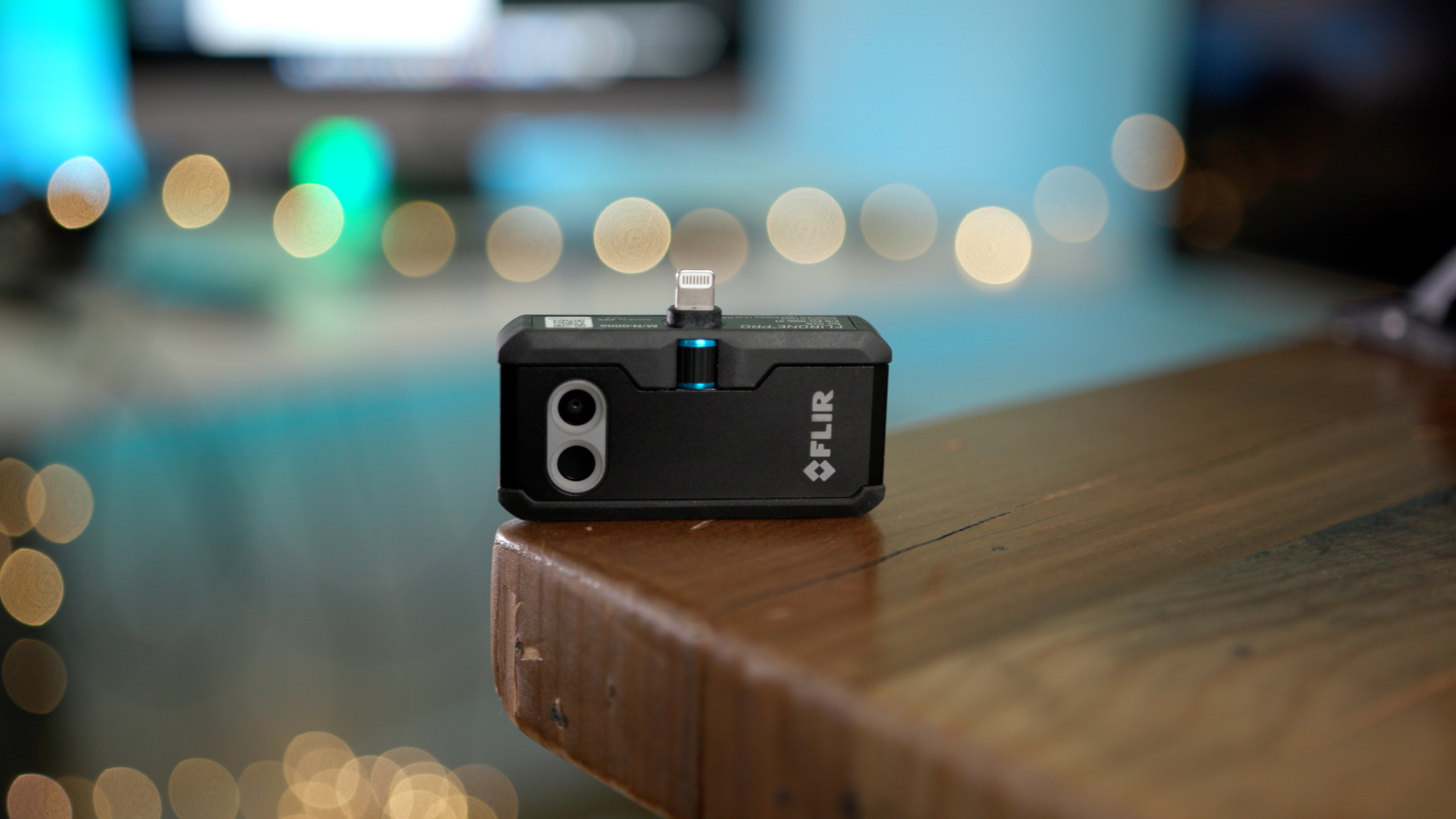 Others have complained about the lackluster battery, which is another valid complaint. After charging the Flir One Pro in full, I’ve noticed that the battery life quickly drops down to the high 80% range after just a few minutes of usage. This could be more of a calibration issue, since I still get about an hour of usage out of the unit, which is what Flir promises. An hour isn’t much, but it’s usually more than enough time to pinpoint an issue. 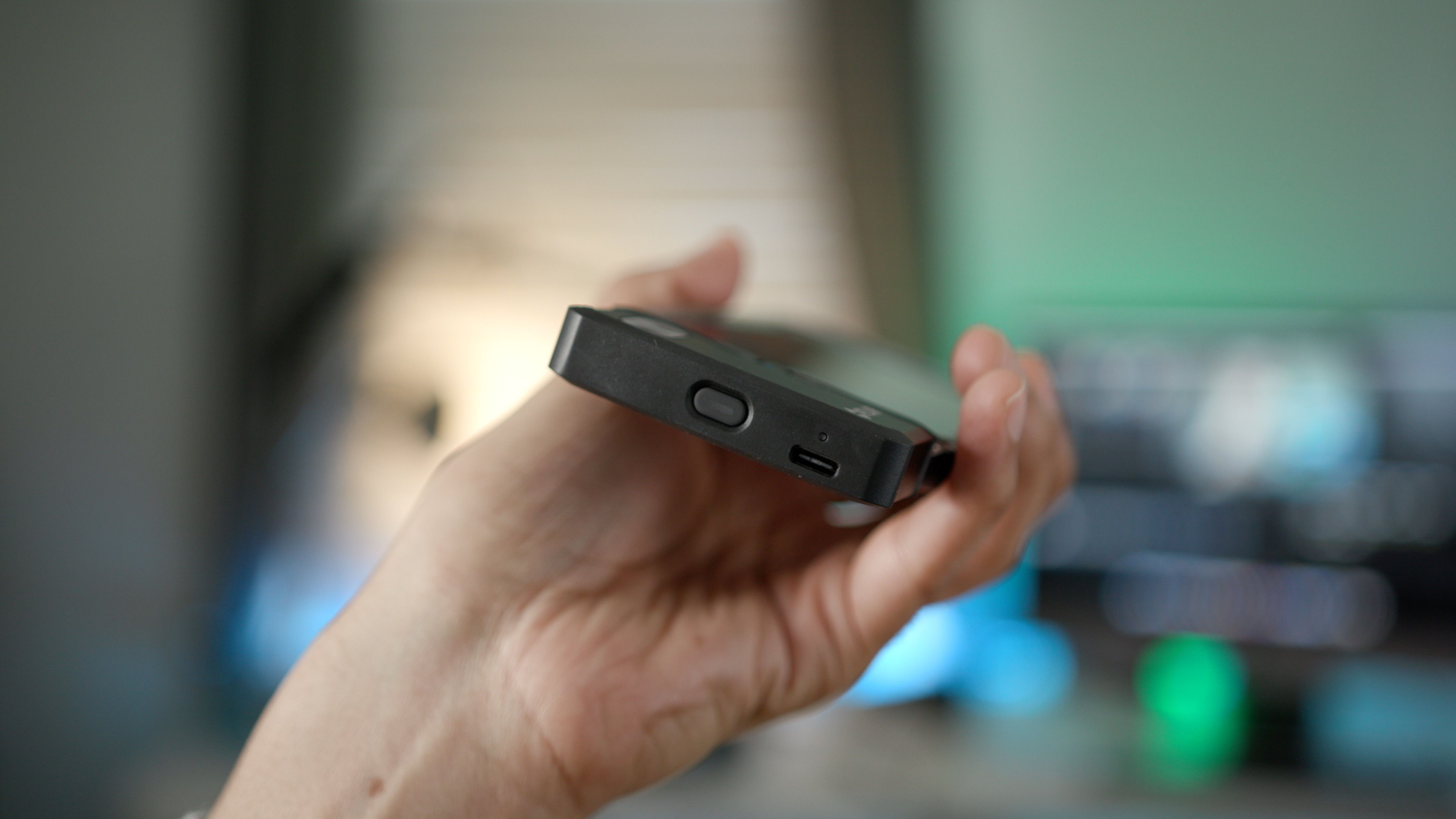 For a device that’s over $350, I can see where the aforementioned issues prove to be a sore spot. Users have also complained about how Flir has dropped support for older iOS devices. That something to keep in mind, but to be fair, it’s also a decision where many factors may come into play. Flir should definitely address the basic issues with its app, though, because this is otherwise a device with tons of potential, much of which has already been realized.

The Flir One Pro is a useful little iPhone attachment that can legitimately save you money based on troubleshooting household issues. If you’re buying it for that purpose, then some of its downsides — such as the lack of battery life — may not matter as much to you. However, if you aspire to use the Flir One Pro for creative purposes, then it becomes a harder sell given its limitations with frame rate, battery life, and resolution. 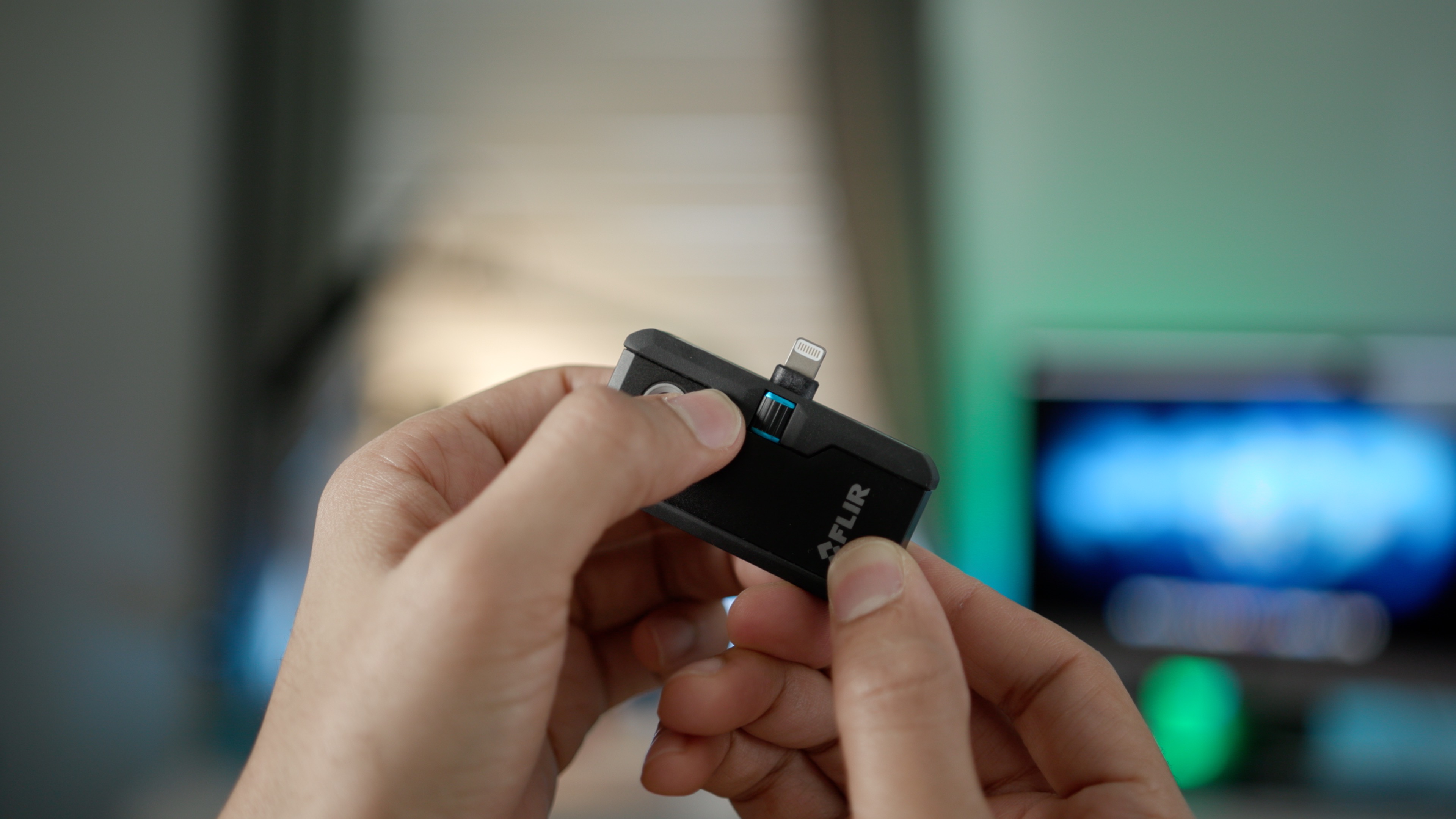 That all said, the Flir One Pro is a relatively affordable device with a solid thermal camera sensor inside. There are significantly pricier higher end standalone units that you can buy, but unless you use those for professional work, I think the Flir One Pro is good option for homeowners who want to occasionally be able to identify potential household issues. What do you think?