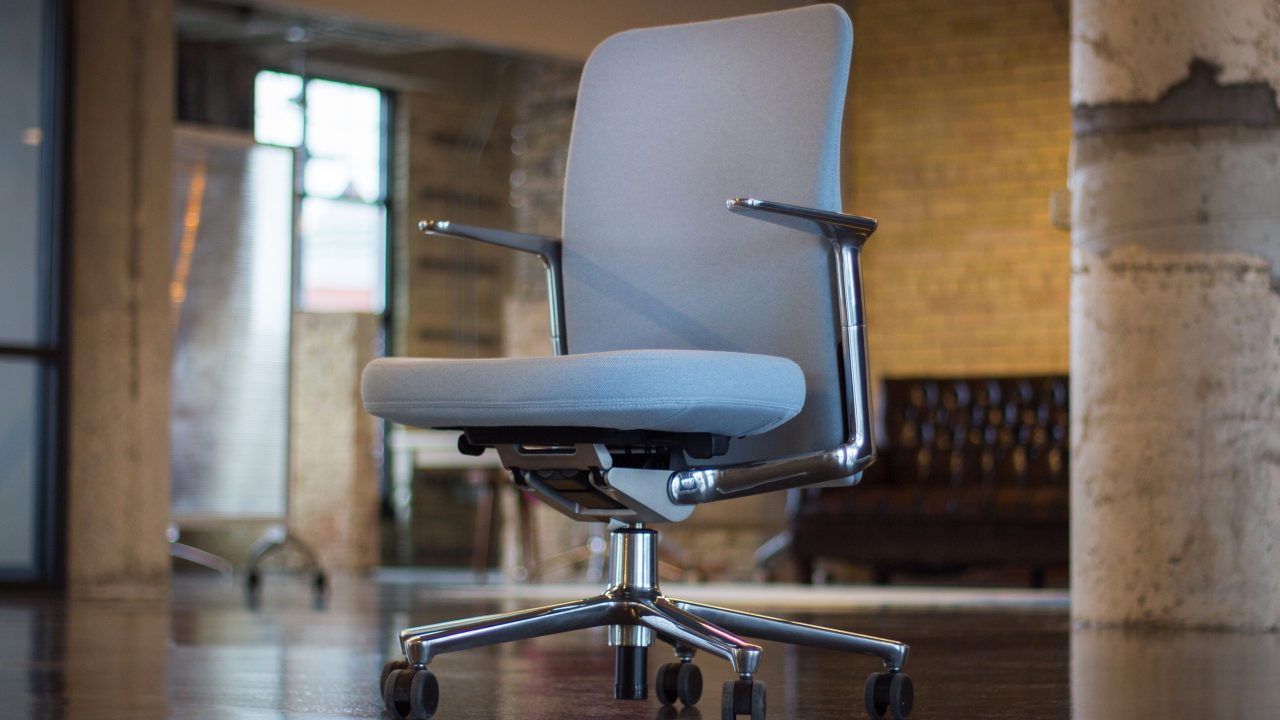 If I asked you to name a few common technology products, office chairs probably wouldn’t make the list. The act of sitting down is such a fundamental human activity that chairs are often overlooked entirely, and rarely thought of as technology. Yet, sitting has quietly become an art in itself. The engineering behind a chair can make or break your productivity and its design can compliment or ruin the appearance of room. Multiply that factor by 12,000 – the number of employees expected to occupy the new Apple Park campus in Cupertino – and suddenly choosing the right chair becomes vital.

With that in mind, upon hearing that Apple – with guidance by Jony Ive – had picked Vitra’s Pacific Chair as the seat of choice for one of the most creative workforces on earth, I knew I had to try one out myself.

When designers Jay Osgerby and Edward Barber first began working on a new office chair for Swiss furniture maker Vitra, they probably never envisioned the thousands of seats that would eventually canvas Apple Park, neatly nestled behind nearly every desk. Yet, the chair and the campus itself feel designed in tandem, as if architect Norman Foster’s blueprints hung on the wall side by side with sketches of the seat.

The first thing I was struck by when seeing the Pacific in person was how intensely modern it looks. It’s not a 1950s cigar-smoking executive chair. It’s not a Rube Goldberg-esque ergonomic contraption covered in levers and knobs. And it’s certainly not the contemporary recliner-on-wheels that fills the cubicles of so many offices today. 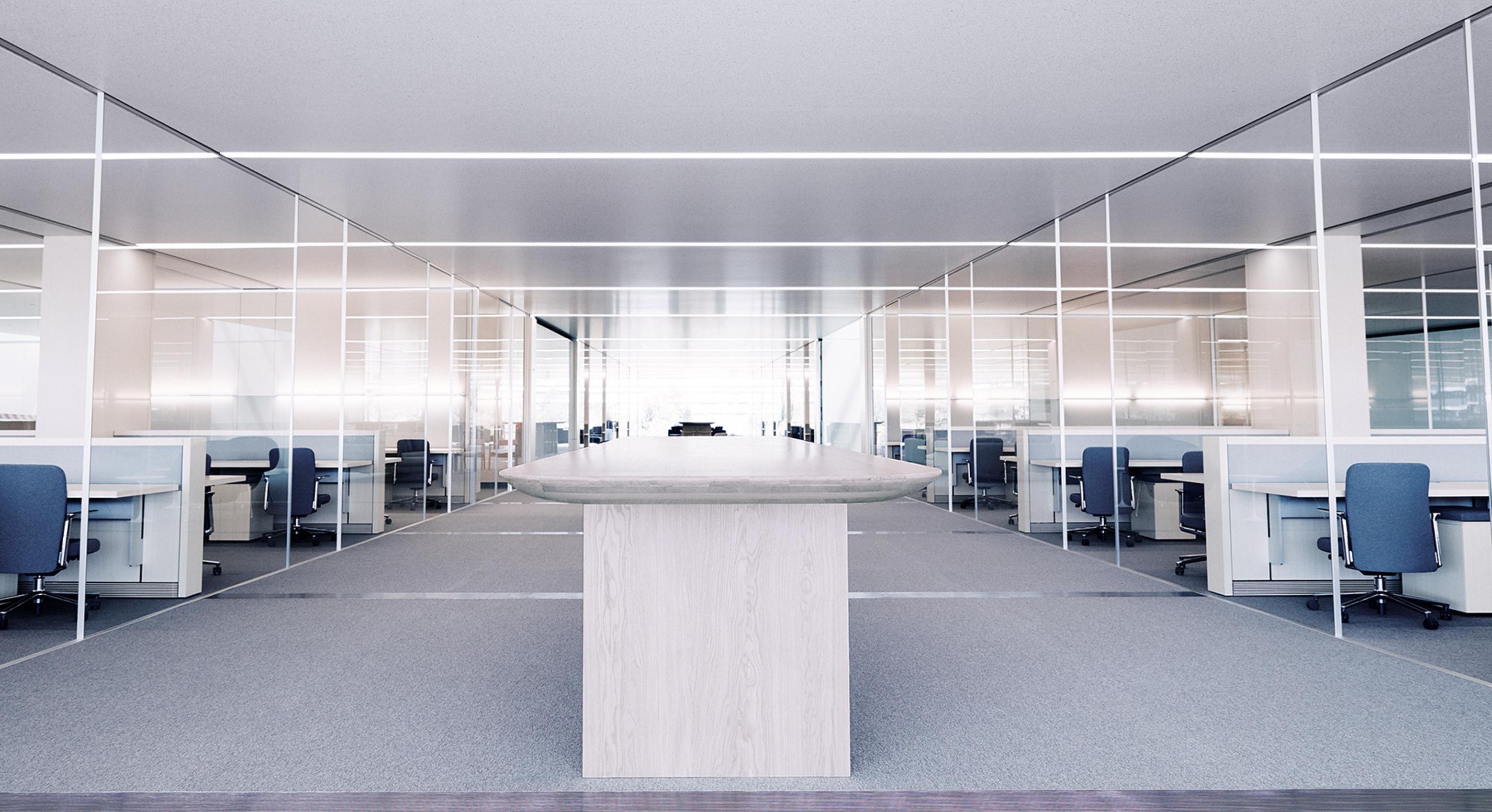 Instead, the Pacific radiates a kind of quiet elegance – even in name. Its design is active in a way that feels relevant to a modern lifestyle. The chair is built for the way people work today, but without the visual noise of its contemporaries that I’ve always considered so visually offensive. More than once, I found myself just looking at it.

Vitra offers a dizzying array of configurations of the Pacific. Three different models offer low, medium, or high backs. The chair’s armrests (available in either fixed or adjustable configurations) and frame can be either light or dark, aluminum or plastic. You can choose between two types of casters for the base. Seven different materials can cover the seat and backrest, each in a variety of unique and striking colors. 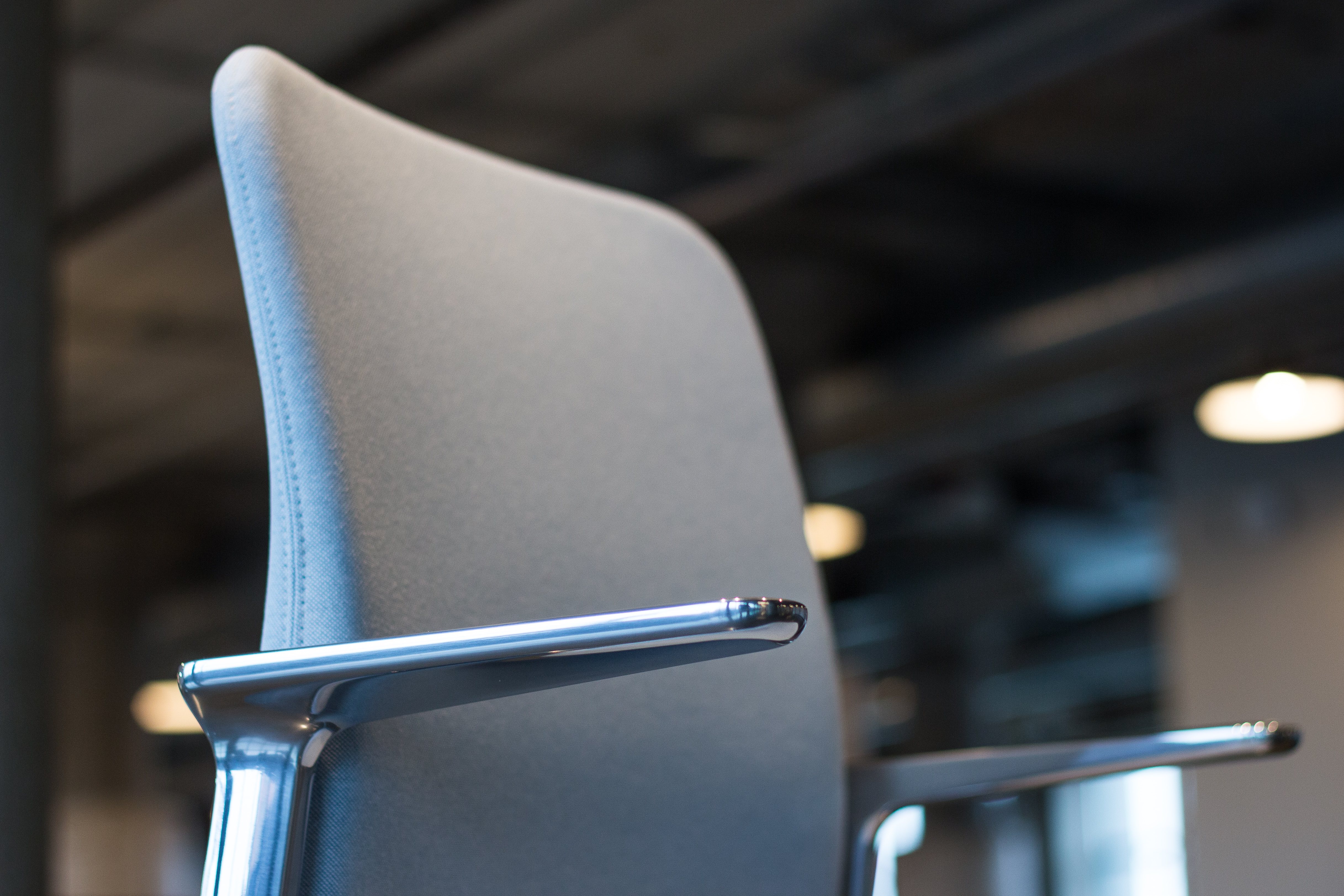 The model of Pacific I bought is nearly identical to the configuration Apple chose, save for the material choice: low backrest with fixed, aluminum arms, polished 5-star aluminum base and frame, covered in a light grey ice blue plano fabric. Bloomberg described Apple’s material choice as a “deep-sea blue”, but the closest match I can find on Vitra’s website is a nero ice blue. 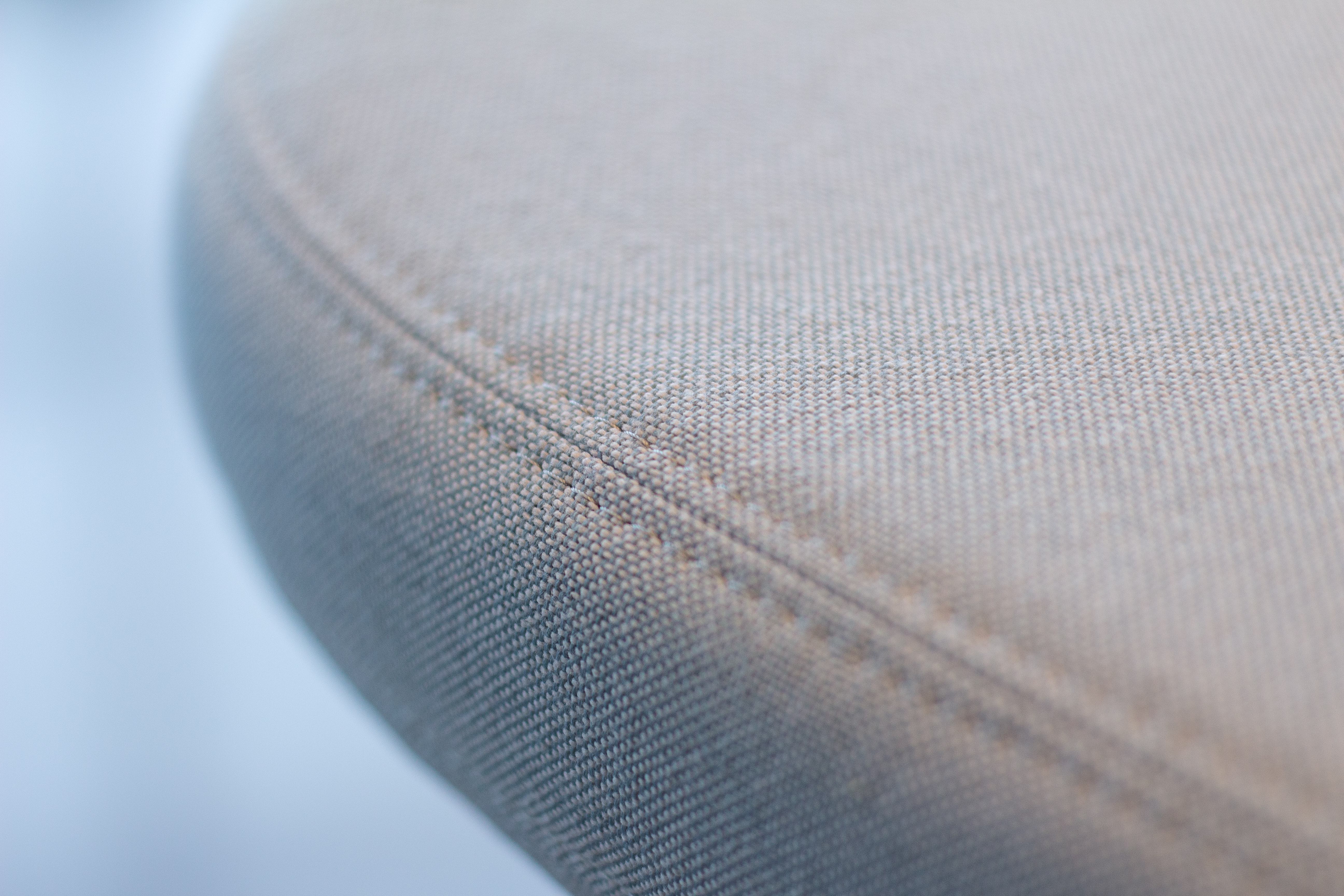 While plastic armrests will save money, I can’t imagine why anyone would order them unless adjustability is paramount. The aluminum armrests are the chair’s defining visual feature, the focal point your eyes can’t help but trace.

Jutting straight ahead and contrasting sharply against the chair’s soft fabric, the armrests are simultaneously reminiscent of the tail fins on a Bel Air and the ancient Samoan adze, the tool they were inspired by. At the same time, the polished surface feels precise and luxurious – almost identical to the casing of a stainless steel Apple Watch. 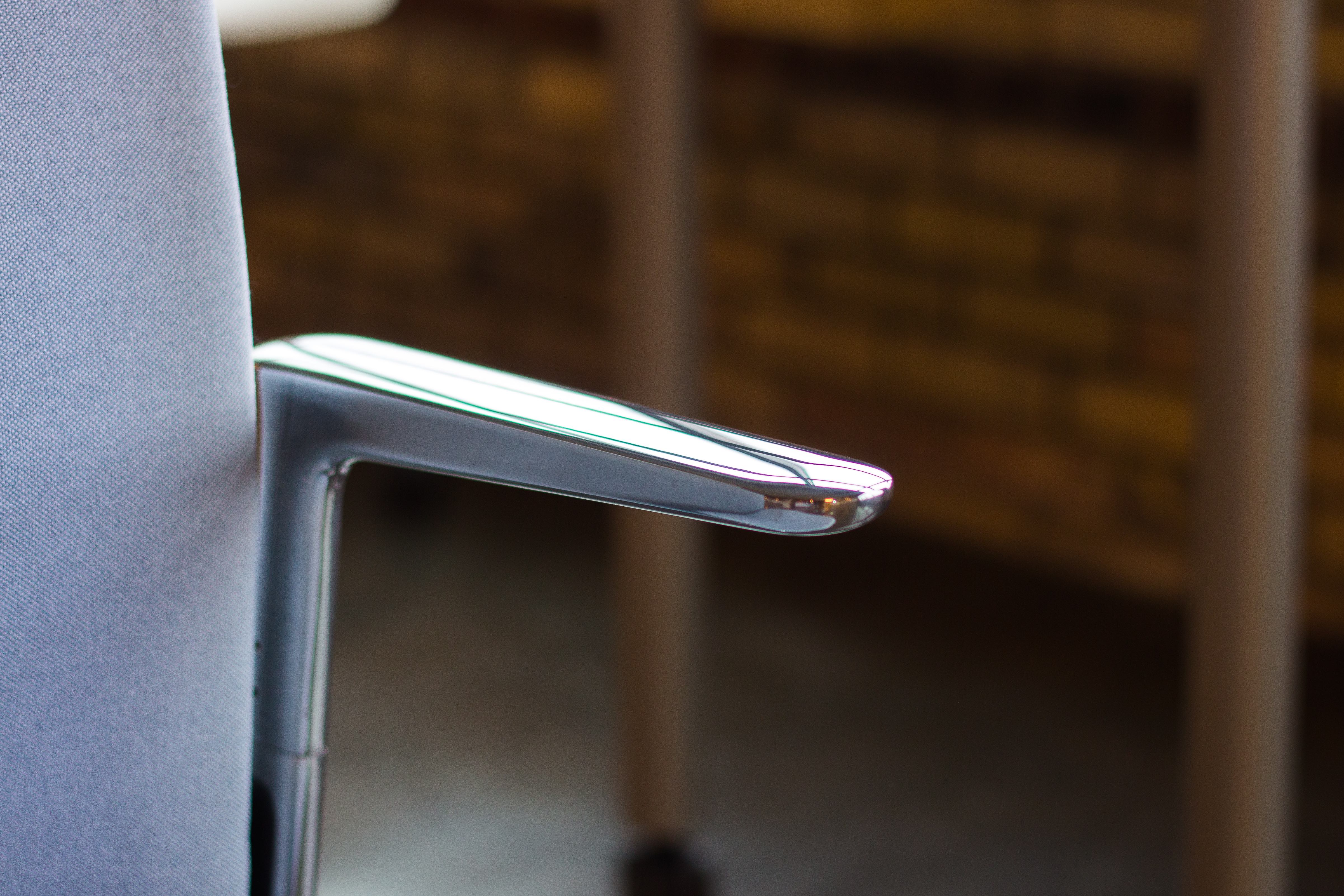 Unfortunately, this is one situation where form comes at the cost of function. The aluminum armrests are fixed, and can also be quite cold and hard when used for extended periods of time. In chilly January weather, I found that they wicked heat from my body, even with a long sleeve shirt on. Vitra offers a version with a more comfortable leather pad, but it compromises the armrest’s clean lines.

After sitting down, I needed to make a few adjustments to suit my comfort. Four main controls hidden on the underside of the seat operate the chair’s ergonomic features. Barber & Osgerby went out of their way to lengthen the backrest to hide all of the Pacific’s mechanical components. In many ways, it is the “anti–Aeron.” 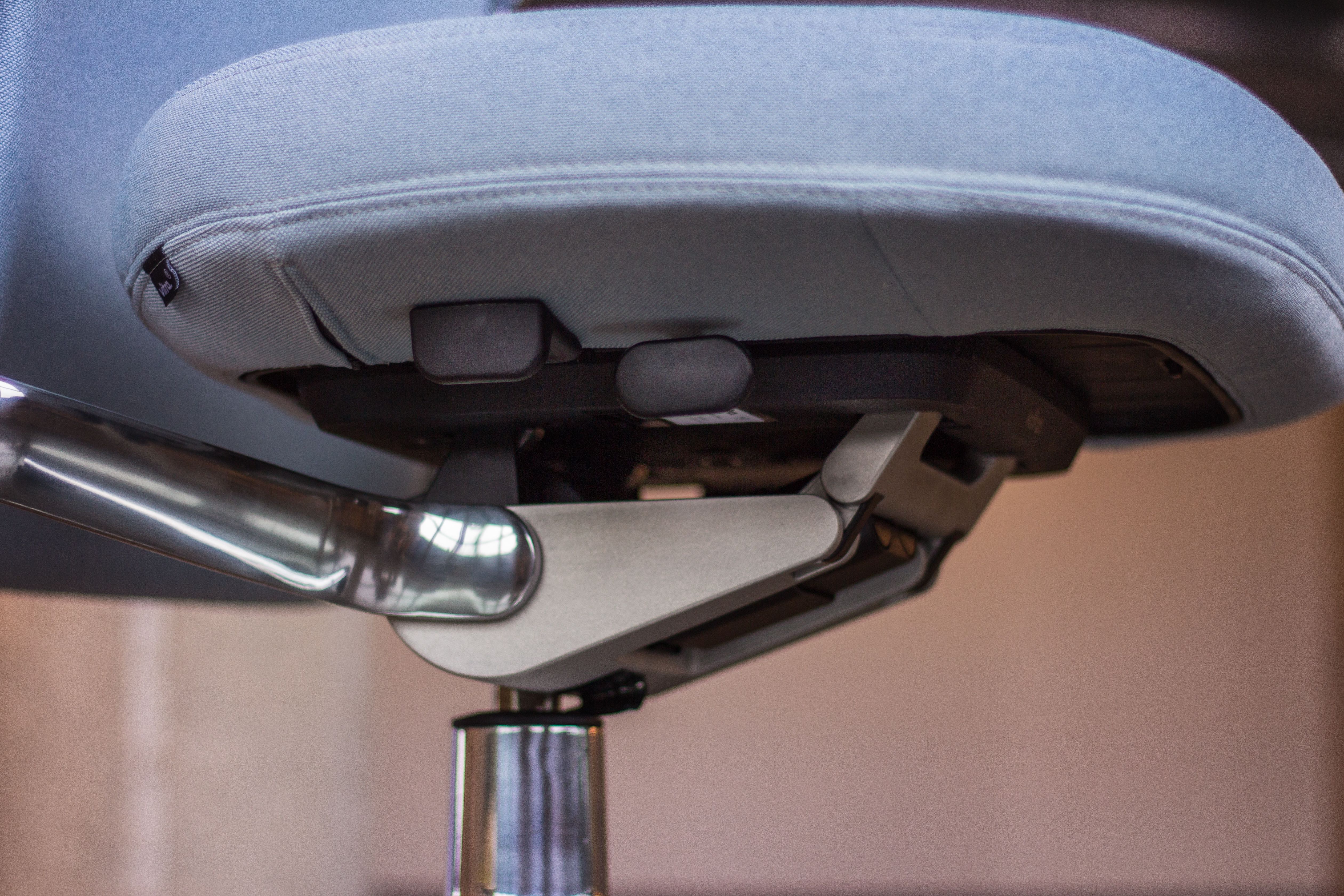 Like most office chairs, the Pacific’s height is adjustable, but seat depth, backrest height, seat tilting, and backrest support can also be independently changed. All of the controls – and the chair itself – feel incredibly solid. There’s no squeaking or wiggling, and nothing feels loose – it’s incredibly well-built.

However, even after looking at the instructions, I had to fiddle with the controls a little bit to figure out how to make adjustments. Within about five minutes of tinkering I was able to get the chair in a comfortable configuration. Next time, I would probably choose the medium backrest for more support. 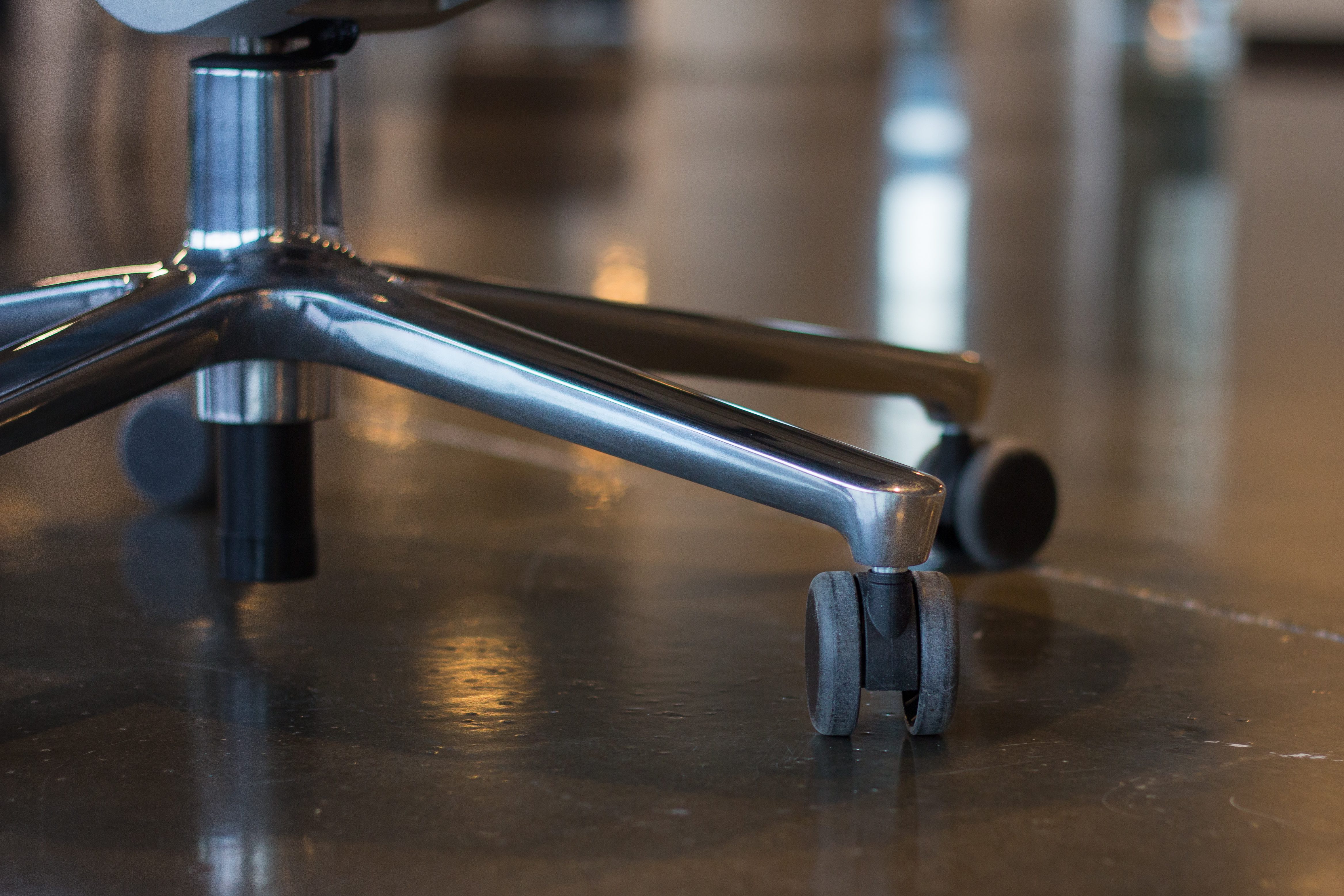 While the Pacific may not appear as ergonomic as its competitors, I found it easy to sit at throughout entire days of work, interrupted only by hourly reminders on my watch to stand up. Of course, the chair is designed for much more active work environments with healthier sitting patterns. Modern offices are collaborative spaces, not isolated cubicles. Workers move freely from one space to another, not confined to one desk for eight hours.

The Pacific is designed with these nomadic environments in mind. It’s not the kind of chair you’re going to choose for a nap. Its upright posture and firm, but comfortable seat encourage productivity and alertness. It’s the kind of chair you take when you want to focus and get real work done. When it’s time to take a break, leaning back is made easy thanks to adjustable backrest tension and a locking mechanism that can prevent the back from tilting at all. 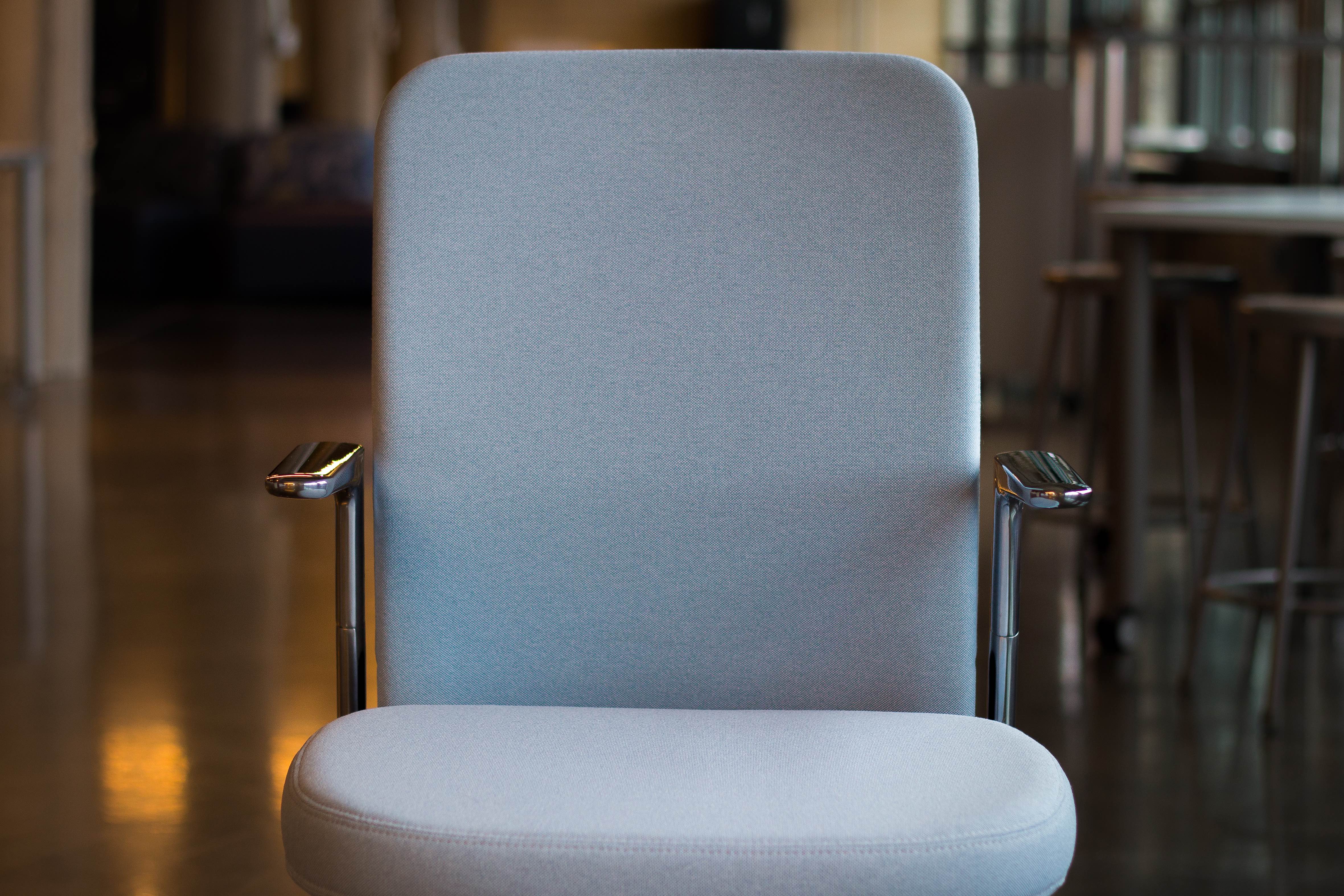 My biggest reservation with the Pacific is that it almost feels closer to a showroom piece than office furniture. I found myself tip-toeing around the chair, taking extra care not to scuff the polished arms. I was even nervous about drinking coffee at my desk, fearing I’d ruin the fabric with a stray drop. Next time, I’d pick a darker fabric color. I realize how trivial this complaint may sound. After all, the design is what you’re paying a premium for in the first place. I’m hopeful my hesitations will fade after further use. After all, I tend to treat new iPhones the same way – babying them on day one, but comfortable tossing them down onto my desk after a few months.

The Pacific chair comes with a steep price tag. It made its debut in 2016 with a starting price of $1,185. To build a configuration similar to Apple’s, you’ll pay over $1,500. That said, I don’t think it’s overpriced. The chair’s build and design surpass that of any office furniture I’ve seen. It has a premium character I’ve come to expect only from products made by Apple. For Apple Park, the Pacific feels almost inevitable. It’s hard to imagine an office chair any more complimentary to the campus’ aesthetics and sensibilities. Putting one in your own office probably won’t help you invent the next iPhone, but it is a beacon of good taste.

Special thanks to Titletown’s T2 Accelerator for providing photography space for this review.