Review: Zephyr’s drone simulator is a great if pricey way to improve your flying skills 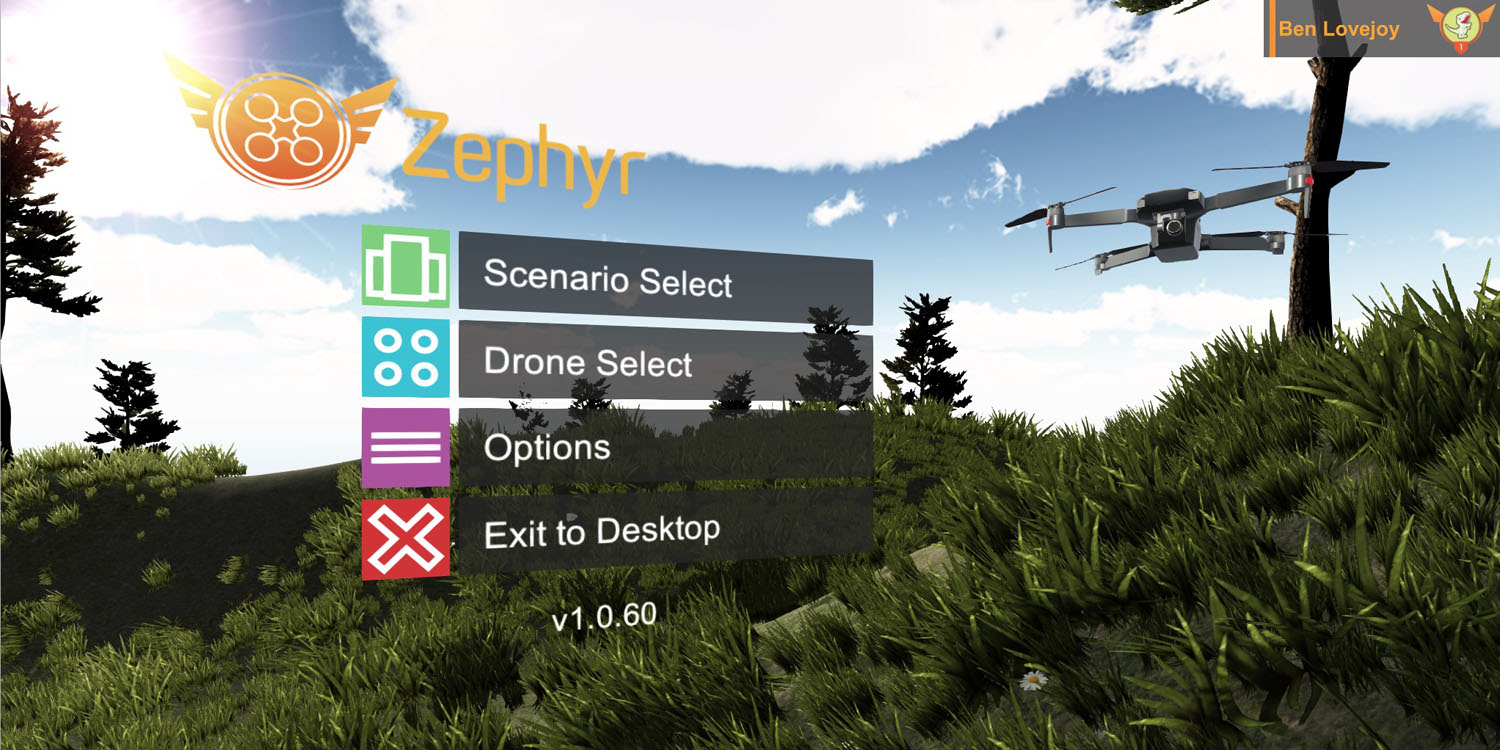 One of the downsides of living in a city is that opportunities to fly your drone tend to be limited. Where I live is well inside the massive chunk of drone-free air over London. Indeed, I’m inside both controlled airspace for my nearest airport (London City, less than five miles away) and a separate Restricted Area above central London.

So if I want to reach clear airspace, it’s either a car ride or train journey away – which means I only really do it when I have a specific reason or project in mind. That makes it hard to build on, or even maintain, my flying skills.

DJI of course has its own drone simulator built into the DJI Go app, but it’s more of a conceptual implementation than an accurate simulation of real-world physics. Which is why I decided to try Zephyr, a simulator for the Mac and Windows that claims to accurately model the actual flight characteristics of the drones it covers …

The app simulates the flying characteristics of the following drones:

While you won’t necessarily be able to use your drone’s actual controller, Zephyr is available with a range of RC transmitters which match your drone’s controls. In my case, to match my Mavic Pro, Zephyr supplied a Fly Sky FS-i6S controller which was different in appearance, but identical in control layout.

You may have to do some tinkering in the options to replicate your drone’s controls exactly – I had to do this to put the camera-tilt control in the same place.

The app’s primary purpose is to provide a training environment for new drone pilots. Indeed, the company is so confident in the app’s abilities here that it says that someone who has never flown a drone in their life before ought to be able to complete the simulator training program and then be ready to confidently fly the real thing.

To work your way through the training program, you start by selecting Basic Training and then select your module. You can either tackle these in order, or just jump straight to the one you want.

It has to be said that the user-interface here is extremely basic! You just get five categories and module numbers. There’s no clue what each individual module offers until you click it.

There are also five other scenarios you can select: 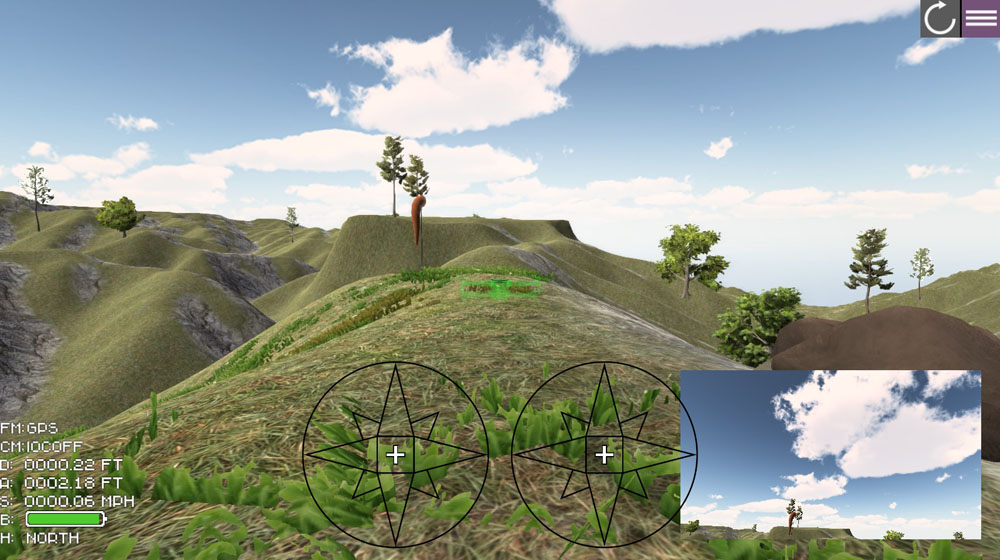 Once you’ve chosen your module, you start your drone exactly as you would the real thing – in the case of the Mavic Pro, by moving both sticks down and in. You are then free to take-off and fly.

The graphics are pretty basic, even if you select the maximum resolution. This is no photo-realistic environment, it’s more like an older-generation game, but the graphics are good enough to see what you’re doing.

You can switch between the drone-eye view (what you’d see on your iPhone/iPad screen) and pilot view. Whichever one you choose, a small version of the other view is also shown bottom-right.

To me, this is one of the most useful aspects of the app: a key skill you need to learn when flying a drone is to be able to split your attention between the camera view and direct line of sight. This is needed both to avoid disorientation, and for legal reasons: in most countries, the pilot is required to keep the drone in sight at all times. This doesn’t just mean that it must be in line of sight (not behind obstacles, etc), but that you must actually be able to see it – you can’t fly so far that it disappears from your view.

The app also monitors to ensure you are flying legally according to FAA rules. For example, if you lose sight of the drone, it will flag that as a violation.

For the training modules and challenges, boxes are drawn on the screen to show where you’re supposed to fly. For example, you might be asked to fly through one box, hover in another, take a photo of a particular thing from a third. 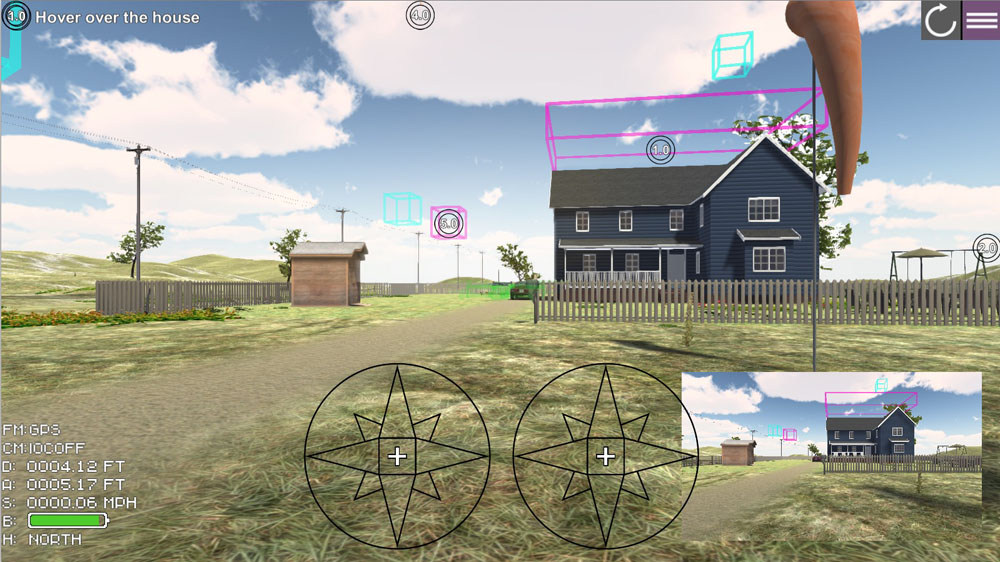 Despite the limited graphics, flying the drone quickly feels very realistic. The handling of the Mavic Pro feels just like the real thing in terms of speeds and response time, and using real controls makes it easy to immerse yourself in the simulated world.

You can also choose to fly in still or windy conditions. Still is useful to avoid distraction when starting out, while wind provides a more realistic environment.

I’d been flying my own drone for almost a year before I tried Zephyr, so I can’t offer a complete beginner’s perspective, but my strong impression is that the training modules do indeed offer a good grounding in the skills you’ll need in real life. Things like flying around a house while keeping the drone in sight, and then lining up to take a particular photo, are the kind of tasks you’ll need to perform in real-world flying.

Most of our readers are going to be interested in the app for personal use, but if you operate a drone school – or plan to start one – there’s a whole course management side to Zephyr. You can create a syllabus for your students, set assignments, monitor their progress through the modules and schedule classes.

Zephyr plans to keep adding features to the app.

For example, recognizing that shooting video is one of the main attractions of a drone, the company is planning to add new training modules designed specifically to teach basic cinematic maneuvers. Things like reveal shots, smooth panning and so on.

It also plans to add new drone models, and – with a growing professional market in mind – new modules for tower inspection work.

For a consumer app, Zephyr is expensive at $99 – or $139 bundled with a suitable controller, which you’ll need if you don’t already have one.

But for someone completely new to drones, that could be a worthwhile investment. If you complete the basic training modules before you even take your real drone out of its box, you’ll be well equipped to start enjoying it right away – and to avoid the common beginner mistakes that lead to crashes. If you consider the repair or replacement cost of a drone, then it could be considered good insurance.

For someone like me, who flies my drone very occasionally (I mostly bought it for travel), it is also useful both to keep my hand in, so I don’t lose my existing skills, and to try out new things.

However, for an existing pilot, $139 is a lot harder to justify. Here I would say it is a luxury – definitely a nice option to have, but personally I don’t think I’d want it enough to hand over the cash.

Zephr is available from the company’s website. Choose the Professional option for the single-user version.