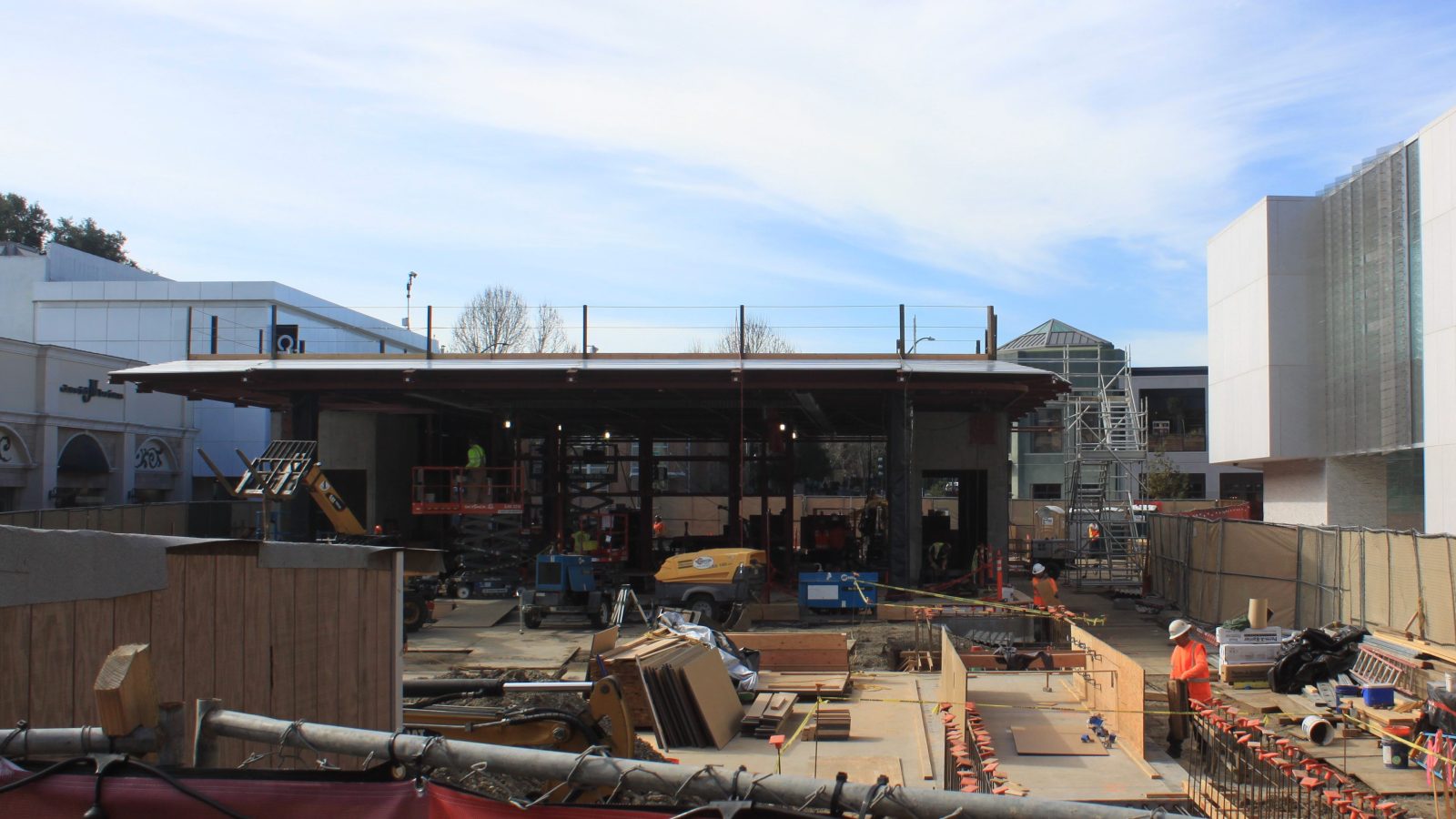 Apple’s rumored plans for an impressive new retail location in Walnut Creek, California are steadily progressing, seen in new photos of the structure provided to 9to5Mac.

Walnut Creek’s Broadway Plaza shopping district is poised to house an expanded and more modern Apple Store, sandwiched between retailers Neiman Marcus and Crate & Barrel in the heart of the plaza. Photographer Thomas Brightbill stopped by the construction site to check in on the store’s progress. The images show that while significant work remains, the majority of the building’s structure has been framed in, and the roof has been covered.

Apple already operates a retail location in Walnut Creek, just a short walk down the street from the project site. The existing store opened in 2003 and hasn’t been significantly updated in several years. Apple has been strategically replacing and completely remodeling many existing locations since 2015, especially those that opened over a decade ago.

Broadway Plaza itself is in the midst of a major renovation. In 2011, the shopping center celebrated its 60th anniversary, making it one of the oldest open-air malls in the United States. A long-range master plan for the plaza was outlined in 2013, calling for a $250-million renovation across three development phases.

Other large technology companies including Tesla and Amazon have since opened locations of their own in the mall. Apple’s planned site is the former location of a California Pizza Kitchen, and when opened, will mark the completion of Broadway Plaza’s redevelopment. 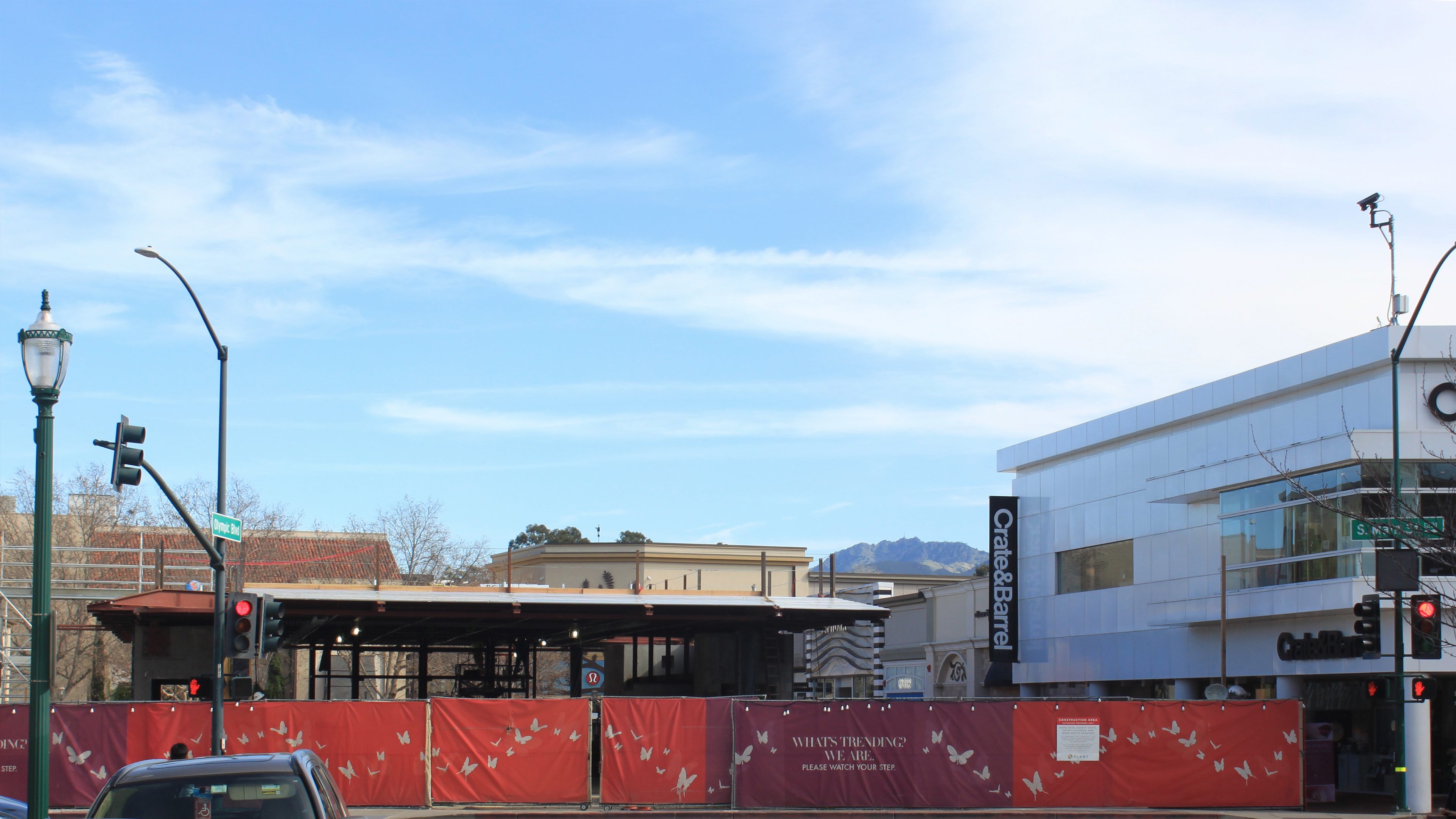 The East Bay Times first reported in June 2016 that a new “state-of-the-art” retail store was to open in the plaza, naming Apple as a possible tenant. The report was followed in April 2017 with more details, confirming that Apple would indeed occupy the space, with a tentative opening date of February 2018.

Today’s photos indicate that construction may have progressed more slowly than initially anticipated. Apple has not publicly commented on their plans for a future store in Walnut Creek, and Broadway Plaza’s redevelopment page makes no mention of Apple at all.

Renders provided by the city of Walnut Creek depict an all-glass storefront and a flat, gently sloped aluminum roof with rounded corners. Apple Michigan Avenue and Apple Park’s Visitor Center were the first two retail locations to feature such a design, and are good references for how the new Broadway Plaza location will appear. Two large, stone supports anchor the north and south sides of the store, providing wall space for product displays known as “The Avenue.” The east side of the building will open to a tree-lined community green. 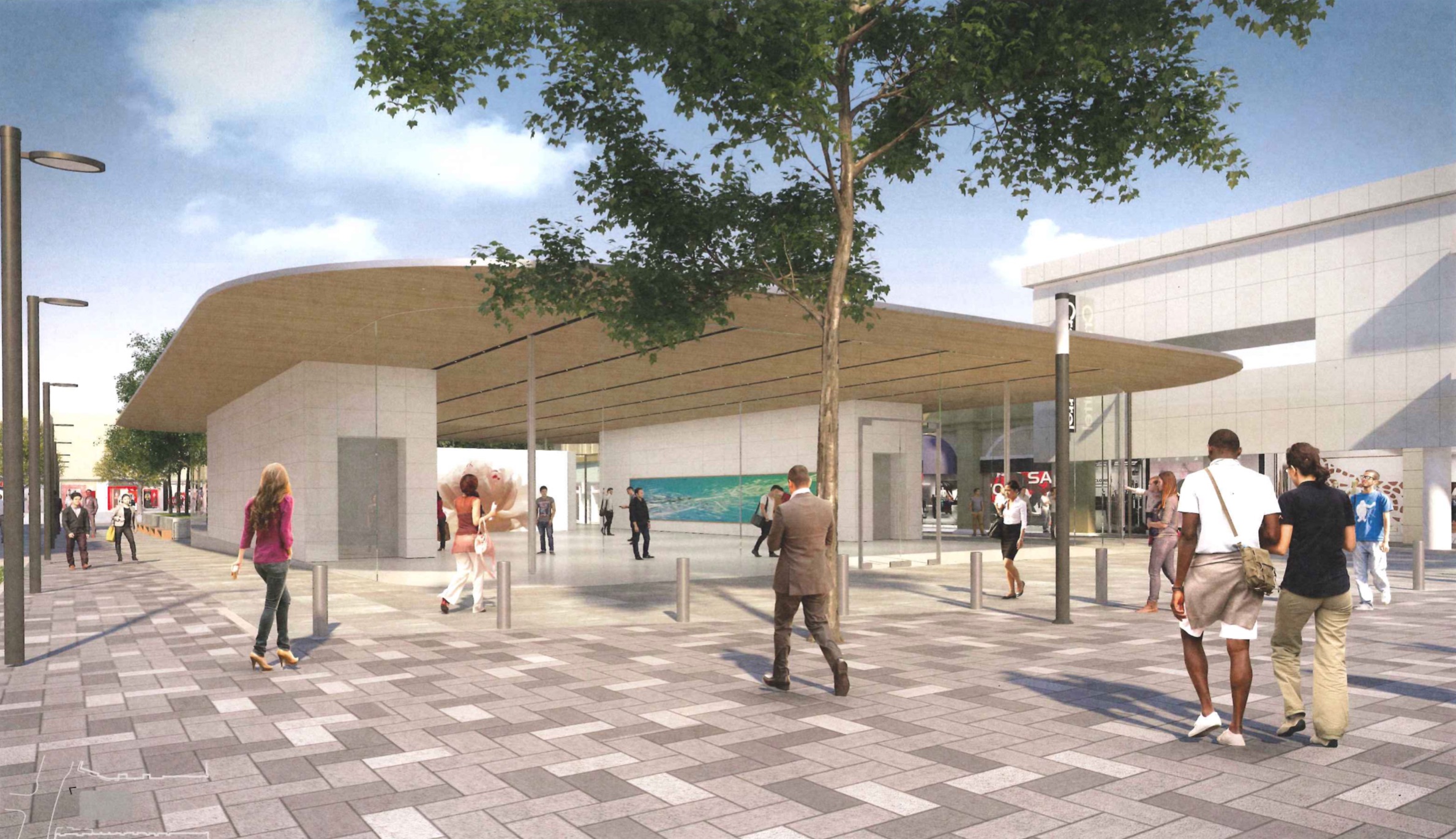 The architecture firm behind the project, Bohlin Cywinski Jackson, is no stranger to working with Apple. In addition to several other retail locations, the company was responsible for Apple Fifth Avenue’s glass cube in the heart of New York City. The group also architected the new Apple Stanford, which upon opening was a dramatic departure from the design of Apple’s previous retail locations.

Globally, several construction projects under Apple’s guidance are in the works. Six Apple stores are either currently being renovated or will close shortly for remodeling. A historic flagship location is being restored in Washington D.C’s Carnegie Library, and the culturally significant Kärntner Straße in Vienna will welcome Apple to Austria on February 24th.