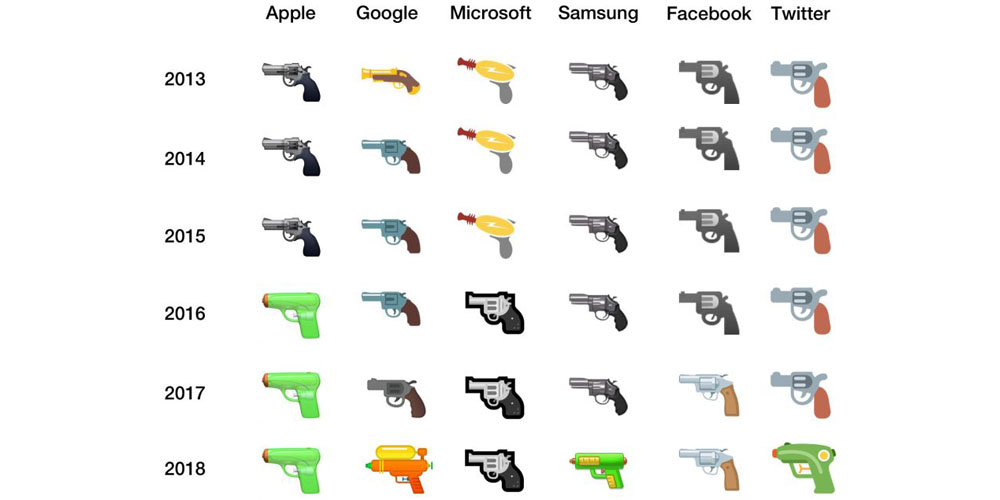 Microsoft and Facebook have announced that they will be changing the pistol emoji from a realistic-looking handgun to a water pistol. Google yesterday made the same decision, all following the lead Apple set two years ago …

Apple swapped out the pistol emoji for a water pistol in iOS 10 back in 2016. Apple had also led the way in opposing a proposal to add a rifle character.

Samsung and Twitter both followed Apple’s example earlier this year, and Google’s decision yesterday left Facebook and Microsoft the only remaining big tech holdouts. But Business Insider reports that this is about to change.

Facebook plans to provide a new image for the gun emoji more in line with the Apple, Samsung, and Android images, a Facebook spokesperson told Business Insider. The change is going to be made in the interest of consistency, to prevent confusion, but the company plans to bring consistency across different tech brands up as a discussion topic with the Unicode Consortium, the organization that oversees emoji, the spokesperson said.

Microsoft says it’s “in the process of evolving our emojis to reflect our values and the feedback we’ve received.” The company also tweeted out a preview of its new water-gun emoji as “a preview.”

The drive to change a character sometimes used in a threatening way became ever stronger as more companies made the switch. Someone on a device with a water pistol version could send an innocent teasing message which could be mistaken for an aggressive one on a device which displayed it as a real weapon.

“It was only after Apple went with their water pistol design that we started to see other vendors following suit,” Emojipedia founder Jeremy Burge told Business Insider. “Apple clearly has the most mindshare when it comes to emoji designs,” he continued.

Microsoft’s switch is a somewhat ironic one, as the company started out with a toy gun before switching it to a real one in 2016 – just as Apple did the opposite.

We are in the process of evolving our emojis to reflect our values and the feedback we’ve received. Here’s a preview: pic.twitter.com/BlB3yYTSht