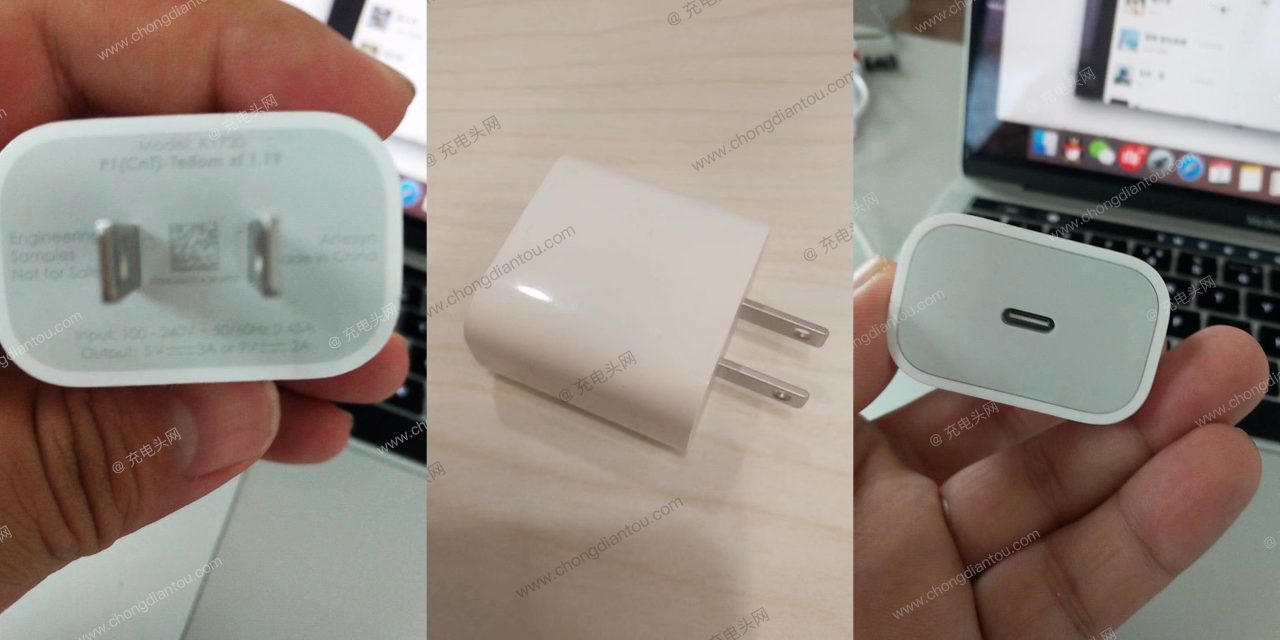 Photos purporting to depict an engineering prototype of the rumored Apple 18W USB-C charger, expected to be bundled with the 2018 iPhone and iPads have surfaced (via Macotakara). This charger is expected to come in the box with the new iPhones, in addition to a USB-C to Lightning cable, for customers to take advantage of fast-charging without having to buy additional accessories.

These images show the design of the new charger, although the labelling differs from Apple’s standard style. The 18W power throughput is denoted, and the USB-C connector hole is clearly visible.

The earlier schematics leaks of this charger gave an impression that the new charger was relatively slimline. These photos depict a charger that looks relatively ‘fat’, though still small in overall volume.

Compared to the current 5W charger, the new 18W design is an oval shape with the same style of super-ellipse rounded corners that has proliferated throughout Apple’s hardware and software design.

We would be careful to trust these pictures wholly without suspicion. The labelling is a little circumspect, and the design is not as sleek as the earlier schematics indicated.

Here’s the previous leaked drawings of this new charger, for US and Europe. The charger in these newly-leaked images is obviously a US plug. On the EU render, you can see the outline of the inner oval, which matches the photos.

There’s a decent chance this is some kind of third-party copycat charger, not an official Apple manufacturing item. The Chinese clone companies copy everything about the iPhone these days, including replicas before the official devices are even announced. It could also be an earlier Apple prototype unit that has now been superseded by a newer, tweaked, design.

Even in this form factor, the schematics show a sleeker profile which seems more comparable to the current 5W brick. And it looks to be physically smaller than the existing 12W iPad charger.

Type-C fast charging is already in the iPhone 8, iPhone 8 Plus and iPhone X but the included accessories do not use it. With additional purchases, USB Type-C fast charging allows an iPhone to charge from 0% to 50% battery in under half an hour. If a 2017 iPhone was connected with this new 18W charger, it should be compatible and also charge at higher speeds.

The new 18W charger will be a nice perk for 2018 iPhone buyers, and will represent the biggest upgrade to the iPhone’s bundled accessories in many years. Speaking of accessories, some reports indicate that Apple will stop including the 3.5mm to Lightning dongle this year. Apple also continues to push forward on development of its AirPower wireless charging mat, currently expected to be available alongside the 2018 iPhones in the fall.