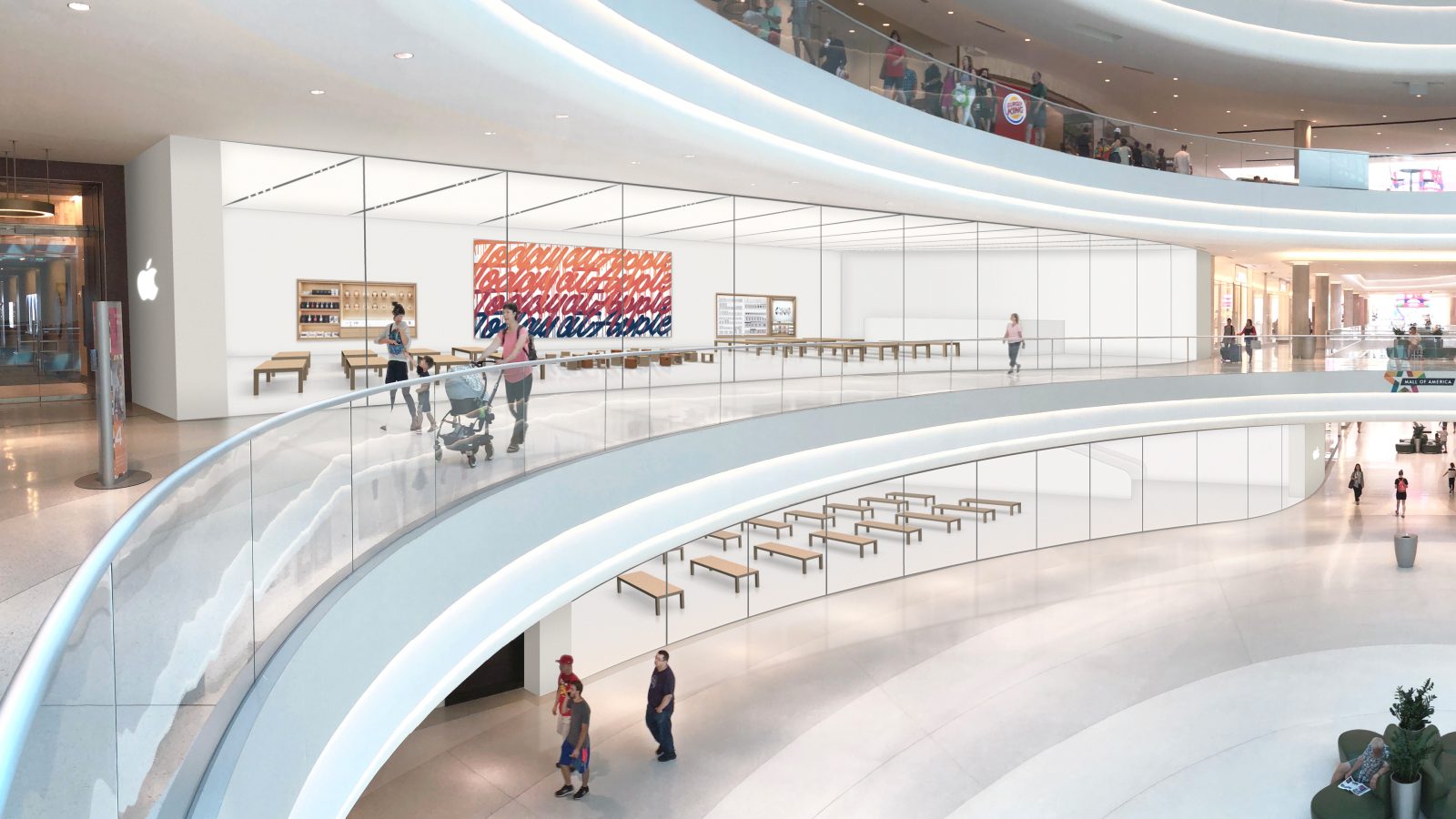 Since the introduction of a new retail design language in 2015, Apple has remodeled or moved well over 60 of its existing stores in order to better serve the growing demand for Apple products and customer support. The majority of these refreshed stores have been among the earliest opened, some dating back to the start of Apple’s in-house retail efforts in 2001. Surprisingly, one of the last early stores remaining relatively unchanged and in dire need of expansion is located in Bloomington’s Mall of America.

I recently visited Mall of America for the first time in several years, and Apple’s store was the first I stopped at. Located on the South Avenue of the first floor, the space is centrally located near a mall entrance and the Nickelodeon Universe center court, but lacks any special details that make it stand out from other shops along the way.

This is partially due to the fact that the location dates back to August 11, 2001, making it Apple’s fourth store to open worldwide. While an early remodel removed the original black facade and another in 2009 swapped out the store’s theater for a more modern Genius Bar, little else has changed. 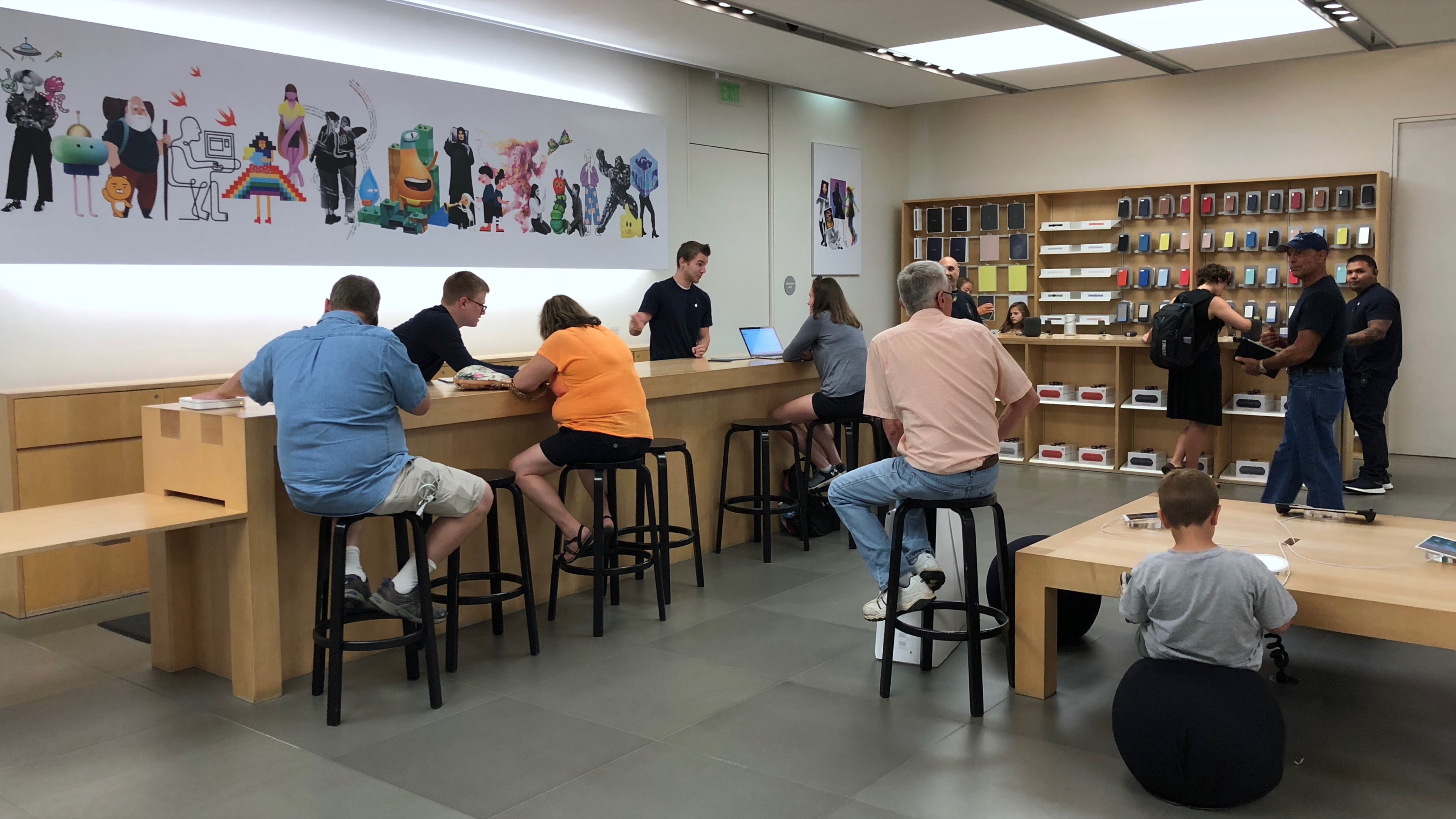 As it stands today, Mall of America’s store is one of Apple’s least impressive, overshadowed by nearly every other major brand in the mall including Microsoft’s knockoff store just across the hall. In fact, every other Apple store in Minnesota boasts significantly nicer facilities. Standard painted drywall, worn out fixtures, and a cramped footprint don’t convey the awe-inspiring attention to detail Apple’s new stores are known for. It’s certainly not a space worthy of one of the largest and busiest shopping centers in the country.

As I continued my tour of the mall, I found myself daydreaming about a more fitting space for a new Apple store. At first, nothing in particular stood out to me. Then I saw it: the north expansion wing. Completed at the end of 2015, the $325 million project known as “Mall of America Crossings” is the newest and most impressive addition to the mall. With terrazzo floors and a brighter, cleaner look, the addition almost feels designed to lure Apple.

More than just an expansion, the wing has been positioned as the mall’s new entrance and is the preferred location for Lyft and Uber drop-offs. Mall of America’s owner, Triple Five Group, has targeted a more premium mix of brands for the three-stories of retail space. Mall representative Liz McLay even noted that luxury “definitely has a place at the table.”

As of today, much of the north wing remains empty, since the expansion was built before securing leases. A two-floor Zara store and a ground level Anthropologie location are the wing’s only major tenants, with a massive H&M move scheduled for this fall.

Several restaurants line the third floor corridor. Vacancies may quickly fill if construction plans pan out for an additional 1 million square-foot addition adjacent to the north wing dubbed “The Collections at MOA.” Triple Five Group has also submitted plans for a $150 million to $200 million waterpark nearby. 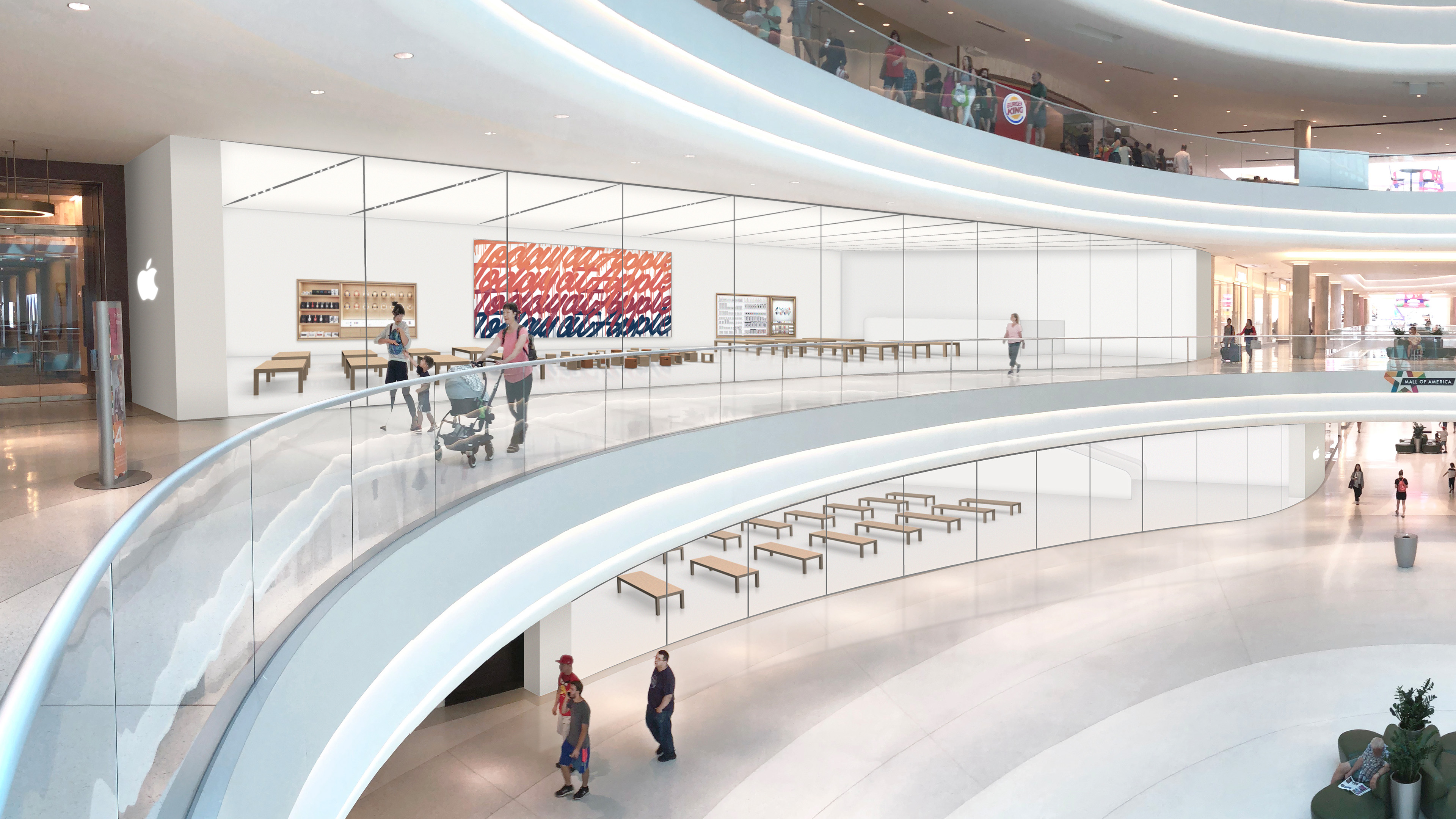 Walking the north wing and browsing the mall’s directory, I tried to decide which vacant space would be the best fit for Apple. The expansion’s east side openings feel like the best solution. Two large storefronts on floors 1 and 2 with curved, sweeping facades are currently unmarked on the mall’s directory and completely covered by temporary white walls. Apple could occupy both of these spaces to create an expansive two-floor store similar to the company’s location at the World Trade Center’s Oculus. 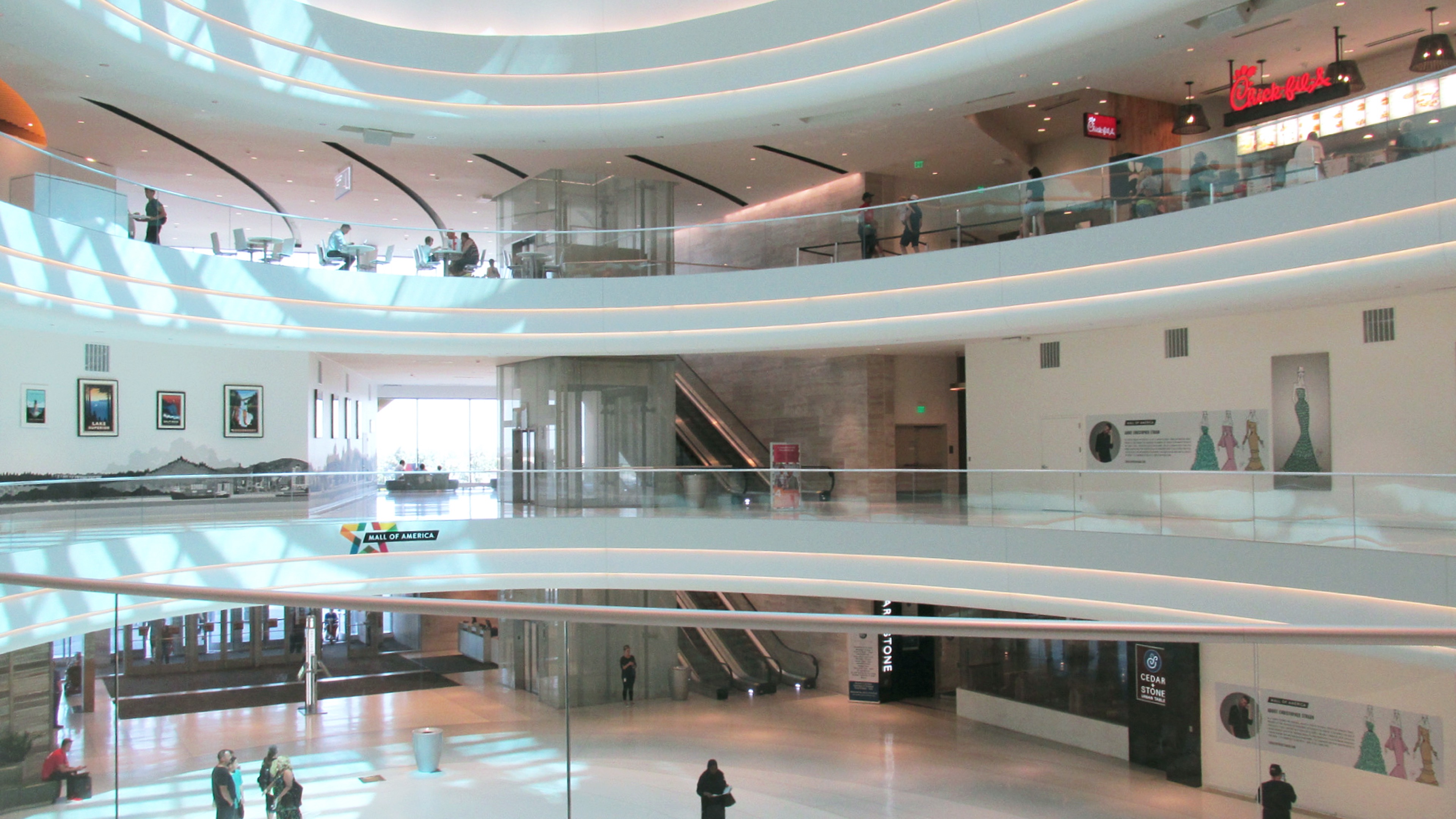 The location is ideal for several reasons. Midway between the mall entrance and exit to the north garden and mall center, the store will see generous foot traffic. The northeast corner is also where the wing’s escalators are located. As the mall’s over 42 million annual visitors make their way to the third level food court, everyone will get a birds-eye view of the store. Stepping off the escalators onto the second floor, visitors would round the corner and immediately see Apple. Inset next to the escalators are also the doors to an adjacent JW Marriott hotel. Guests entering and leaving the hotel via the mall will naturally pass through. A short wall created by the hotel entrance provides the perfect spot to display subdued branding. 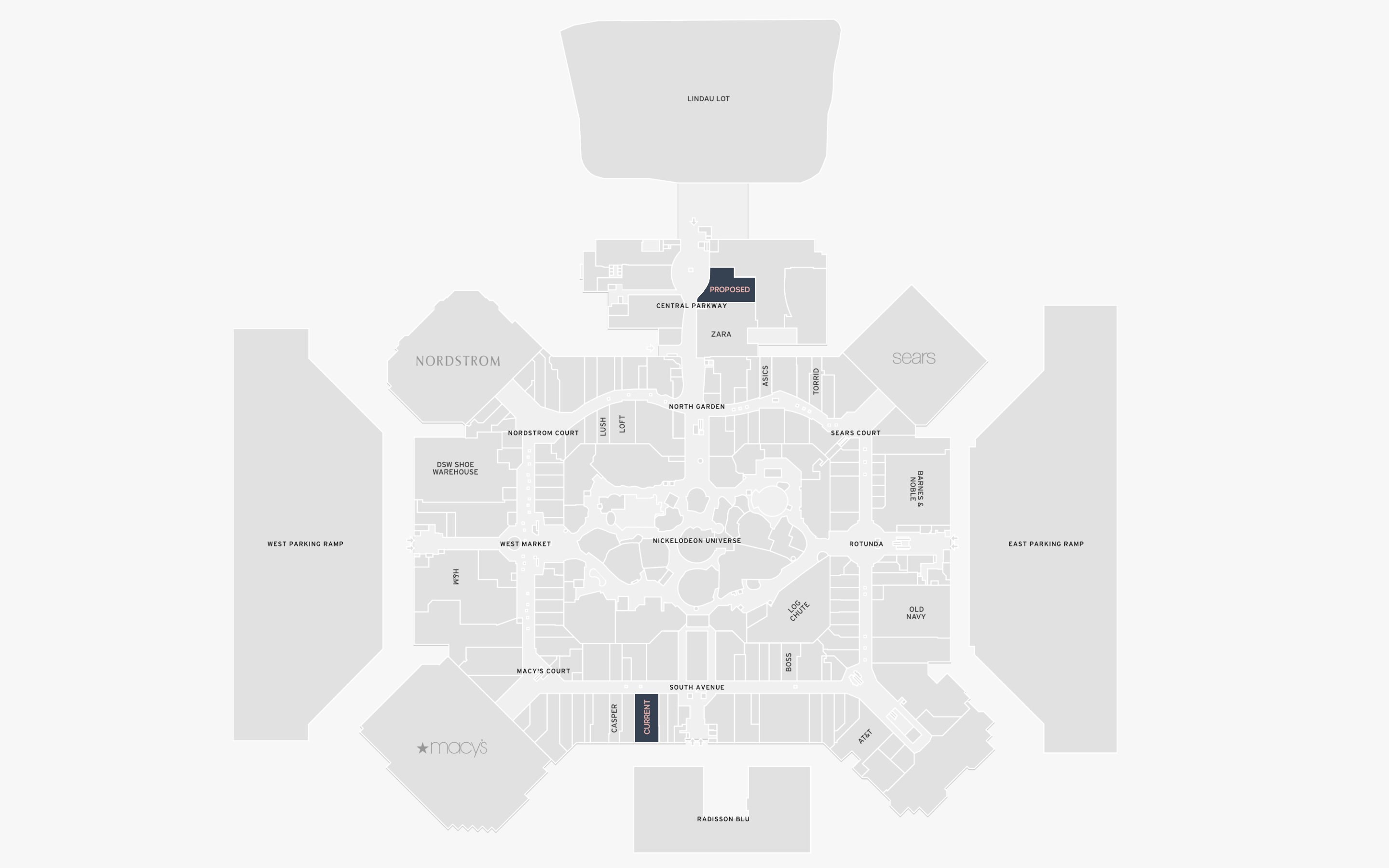 Late afternoon sunlight would spill through the north wing’s dome and into Apple’s two-floor glass storefront. Like San Francisco’s Union Square store, a first floor dedicated to product tables and avenue displays would allow for an ample sales area free of the hustle and bustle of customers arriving for support appointments. Opposite the escalators, a staircase and accessible elevator in the southeast corner would provide easy access to the rest of the store.

Level 2 could be dedicated to the Today at Apple experience. Positioning the store’s massive video wall in the center of the back wall would allow for visibility from any floor in the atrium as well as a wide forum area, perfect for large sessions and performances. Apple Camp and Kids Hour sessions would likely be especially popular in the expanded space, thanks to the number of families and youth groups that frequent the mall. The forum is traditionally bordered by tables for customers waiting for support, forum displays for smaller sessions, and additional avenue accessory bays.

Apple’s senior director of store design BJ Siegel recently noted that Apple wants the “town-hall feeling to be the anchor of the store.” Right now, visitors to the Mall of America seem to gather anywhere but at Apple, making the current store feel more like a repair center. By making an “inspired move” to the north wing, Apple could breathe new life into one of their earliest retail projects.