This week we’re checking out one of the most convenient but costly HomeKit areas: windows. Apple lists four compatible accessories in this category — two announced and two available. We’ll be working with the Serena Motorized Shades by Lutron. Check out our hands-on experience below.

Lutron makes the smart wall switches (reviewed) that make existing lighting work with HomeKit, and their Serena Motorized Shades were early HomeKit adopters thanks to the same Lutron Caseta Bridge. Lutron has been in the lighting and shades business since the 1950s so they certainly have experience in this product category.

If you already use the Lutron Caséta Wireless Smart Bridge with another product like the in-wall dimmer switches, connecting Serena Motorized Shades to HomeKit is totally simple. Install the motorized shades hardware in place, add each unit to the Lutron iOS app, then the Home app and HomeKit automatically pick up the new accessory.

Note that you can use Serena Motorized Shades with physical Pico remotes, the Lutron app, HomeKit, or any combination — for our use we’ll focus on the HomeKit side.

For my testing, Serena Motorized Shades were installed in my home office and assigned to the Office room in the Home app with ‘Window’ as the accessory name. Siri recognizes the accessory with a variety of names. I was pleased with the flexibility here as I first referenced the accessory as blinds, then shades, only to realize the literal name it was given was window.

Siri can open the shade, close the shade, or set the shade to a specific percentage like 30% or 78% — no five, ten, or twenty-five percent intervals to learn. Other natural language like “Lower the shades” or “Open the window” works to completely close or completely open the shade.

Siri intelligently understands commands like “Lower the shades a little” which closes the shade by 10%. Siri can also tell if you the shade is up or down (note that 10% up is still open).

If you have multiple HomeKit window shades, you can open each shade at the same time with a command like “Open all the windows” or only open specific shades by naming them based on room or name. Simply saying “Open the window” to a HomePod in a room with a HomeKit shade in the same room will only open that window since HomePod is room aware.

Voice isn’t the only way to control HomeKit windows and coverings like Serena Motorized Shades. Automation can do a lot of the work for you if you program a few steps around your routine.

For example, I tested automatically opening the office shades at 8 am local (when I begin work) on Monday through Friday if I’m present (based on my iPhone location. HomeKit automation supports each of those variables, and the window shades open reliably if each condition is met.

Another instance is closing the shades if they’re open at 10 pm — regardless of day of the week or if anyone is home. You could also automatically close the shade if no one is home by creating an automation for when the last person leaves home, or close the shade if the light switch in the same room is flipped on. 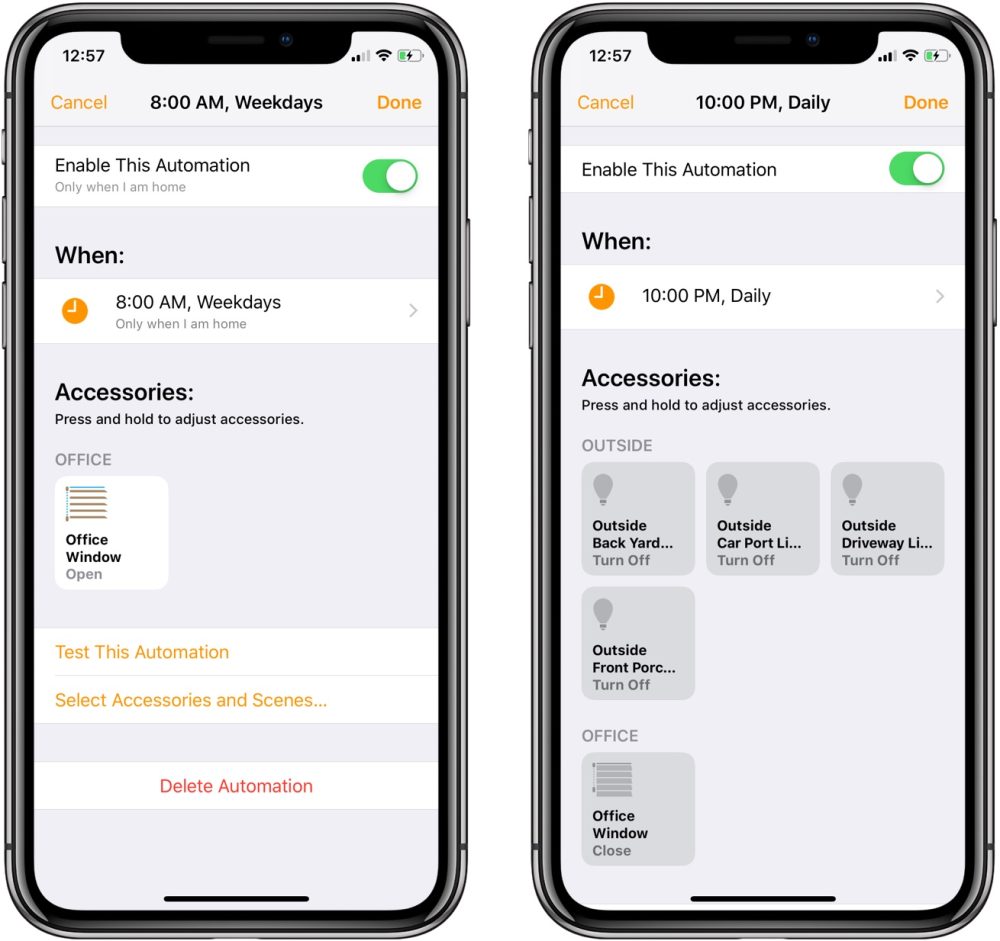 (Using the right sensors and software in the future, you could possibly even automate shade activity based on temperature targets and brightness levels. Philips Hue Motion sensor reports light levels by lux to HomeKit, for example, but you can’t automate by that metric yet — even if third party apps that let you trigger automations by temperature which isn’t available in Apple’s Home app. I’d also love to automate shades opening if it’s raining — how cool would that be! — maybe in a few years.)

Within the Home app, HomeKit shades can be controlled just as easily. The tile for Serena Motorized Shades appears in its assigned room with an icon depicting window blinds. The tile icon has two states: open and colored, or closed and translucent. Shades can be closed, set to a specific percentage (partially open), or simply open (which is 100%).

Long pressing or firmly pressing into the icon (or secondary clicking on the Mac) will open the accessory controls. For window shades, this includes a vertical slider that resembles a brightness slider but cleverly adapted for the concept of window coverings.

As with all HomeKit accessories, favoriting the window shade will place Serena Motorized Shades on the first screen of the Home app and include it on the Apple Watch app (although Siri on Apple Watch can control it either way). If you include the window shade as one of your first nine favorites, Control Center will also give you access to quick control from the tile.

If you want to control Serena Motorized Shades with other HomeKit accessories based on your routine, you can include each shade in scenes like Good Morning and I’m Leaving for controlling accessories across rooms in one command.

You can also create your own custom named scenes in the Home app that include any combination of window shades. These require configuring ahead of time but can be useful for controlling groups of HomeKit accessories without automation triggers.

Scenes can be activated by voice with Siri, with a tap or click in the Home app, or from Control Center or the Apple Watch app when favorited. 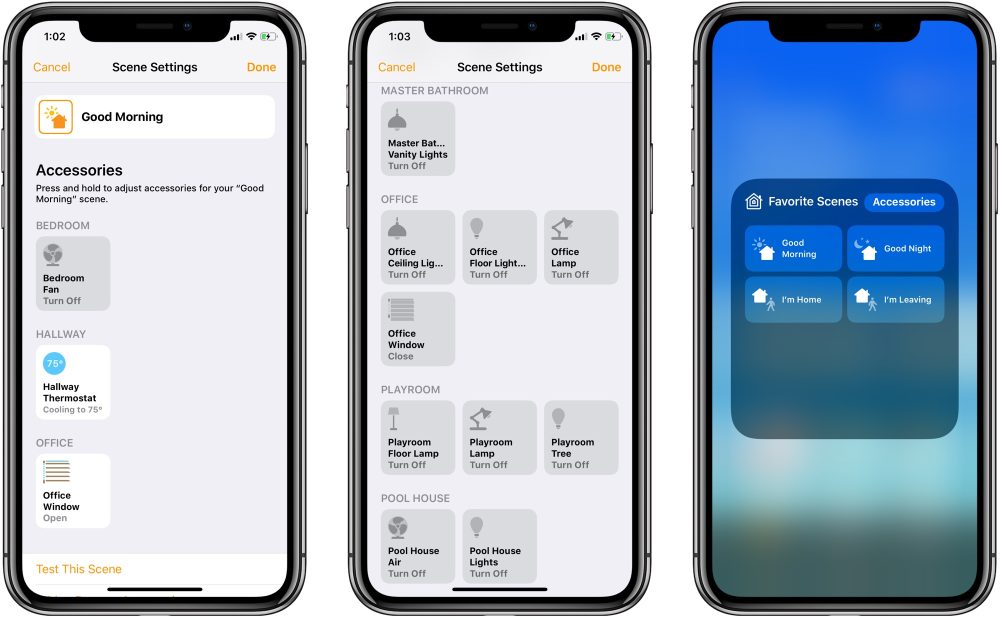 Opting for a straightforward blackout shade for my home office, I tested Serena Motorized Shades with a roller style inside mount setup. I opted for the more attractive fabric wrapped fascia, but saved on the (8 D alkaline) battery-powered hardware. For a wide 70-inch by 35-inch window with this configuration, the list price is just under $900 — note that HomeKit control requires the Lutron bridge as well. 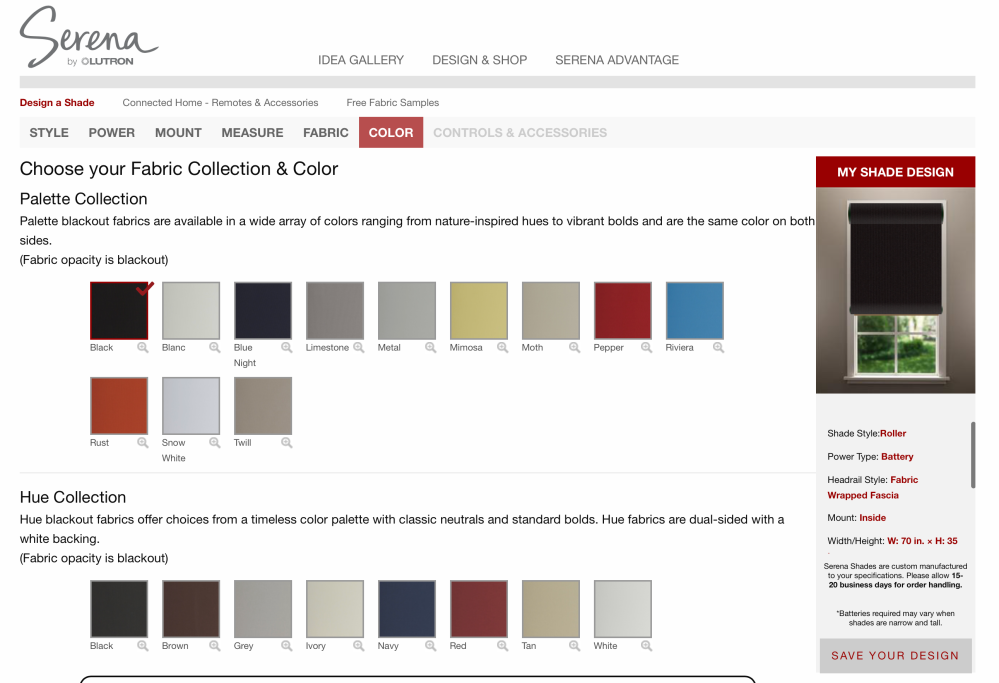 In terms of the build quality, I’m perfectly satisfied with both the overall look and the shade material. As for remote control, Serena Motorized Shades are responsive and operate smoothly. The motor is not so quiet that you would want to record audio in the room with them being operated, but it’s certainly not an issue in normal use.

The challenge is converting a whole home of windows to HomeKit-controlled windows using this solution. For a single window, the price can be impractical. For a whole home, you may want to roll the cost into the price of your house!

Remote control from iOS and with voice using Siri is incredibly cool though. If you can deploy a solution like this in all the right places — even if that’s just one or two windows — you can bring a common task like opening and closing shades into HomeKit.

While it’s not within my own budget today, I would absolutely love having HomeKit-controlled shades on every window in my home — perhaps if I had fewer windows. I regularly open and close curtains now based on time of day, time of year, and occasion. Managing this routine with HomeKit on every window would be a dream.