One day ahead of iPhone launch, AAPL slid as much as 2% yesterday over trade war fears 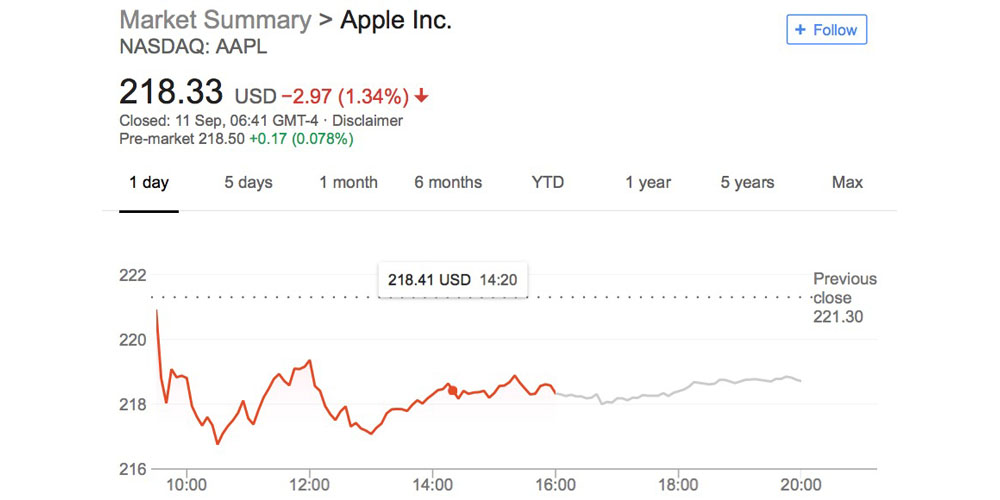 Trump’s latest proposal in his continued push for a trade war with China hit Apple suppliers hard, and the Cupertino company itself wasn’t immune, as AAPL stock slid as much as 2% yesterday.

It rallied somewhat later in the day, but still ended up down almost three dollars, a significant drop in just one day …

With earlier proposals for tariffs on imports from China, it appeared Apple would emerge unscathed – with only the discontinued original Apple Watch on the hit-list. However, the Trump administration’s latest escalation of its proposals would see a 25% tariff imposed on a number of Apple products – including the Apple Pencil, AirPods, Apple Watch and Mac mini.

One analyst estimated that this would reduce Apple revenues by 5%, and profit by 1% – a relatively small impact in the scheme of things, but still an unwelcome hit to Apple’s bottom line.

Business Insider noted that AAPL was down 2% on the day at one point, before it ended 1.34% down.

US companies, including Apple, have repeatedly warned that there are no winners in trade wars, only losers. Apple said that all tariffs ultimately show up as a tax on US consumers as they increase product prices.

Apple is due to reveal its three new iPhones tomorrow at its ‘Gather round’ event, and it’ll be interesting to see the impact this has on AAPL’s share price. Also expected to be announced tomorrow is the Apple Watch Series 4, with news likely on AirPower and a new AirPods wireless charging case – perhaps with new AirPods also.