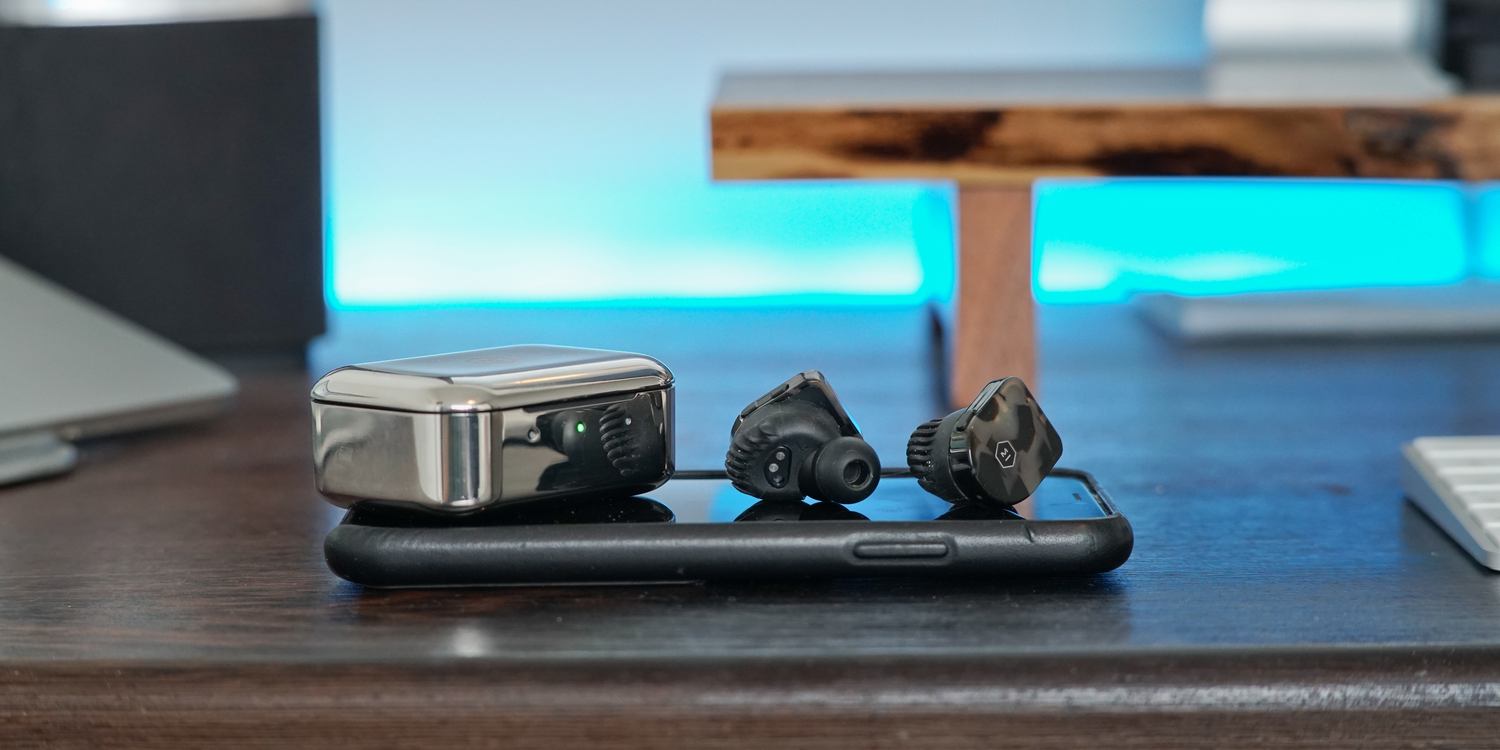 As you’d expect of an Apple-focused tech writer, I do have one or two pieces of Apple kit. The current tally comprises my 15-inch MacBook Pro, Apple Thunderbolt Display, 11-inch MacBook Air (only really kept as an emergency backup these days), 10.5-inch iPad Pro, iPhone X, Apple Watch Series 4 (as of later today) and three HomePods.

But there’s one Apple product I dismissed as soon as I tried it: AirPods. That’s not to say I hate them. I love the idea of something that portable. I adore the pairing system. The battery-life is great. There’s a lot to love about them. But not, to my ears, the audio quality …

Don’t get me wrong: AirPods sound quality isn’t terrible; it’s just very, very average. I found the same thing with the first truly wireless in-ear headphones I tried: the Bragi Dash. I loved the portability, but the sound was again only adequate.

I’m no audiophile, but I do love music, and want to listen to it through headphones which really do justice to the sound. So much as I love the idea of just tucking a charging case in my pocket and having headphones available on demand, I’d resigned myself to the idea that good quality audio on the move means carrying on-ear headphones, with my Bowers & Wilkins P5 Wireless my usual choice.

I’d been equally impressed by the Master & Dynamic MH40 headphones I tried back in 2014. I was somewhat surprised that they equalled B&W headphones because the company didn’t have anything like the same heritage. It was founded just a year earlier, and yet the audio quality was spot-on.

So when I heard the company was launching its first wireless in-ear headphones, it caught my attention straight away. I was able to test them on the day they launched, and first impressions were good. I’ve been using them as my primary headphones since then, so can now give a more considered verdict.

The first thing that struck me about the MW07 design was not the earphones themselves, but the charging case.

It’s polished stainless steel, with three tiny LEDS to indicate the battery status of the case itself and each earphone: green for fully-charged, orange for medium charge and red for low.

The case is, quite simply, beautiful. It looks like a cufflinks case for a designer brand. It feels equally good in the hand, and magnets mean it closes with the same satisfying snap as the AirPods case. It looks and feels absolutely as you’d expect from a premium audio brand.

The earphone aesthetics are a more subjective taste. A stainless steel sound enclosure is surrounded in handcrafted acetate, designed to give the best balance of audio quality and weight. The design is a marbled one, available in a choice of four colors. Personally, I have to say that the aesthetics don’t do much for me, so I’d opt for the anonymity of the black ones, but if marbling is your thing, the blue, grey and tortoise-shell versions are more distinctive.

The MW07 come with four different tips and two sizes of ‘wing’ to help achieve the perfect fit. I seem to be blessed with standard-sized ear canals, as the default tips always seem to work for me no matter the brand.

The ‘wings’ are designed to hold the headphones securely in place. You twist the earphones in from about a 45-degree angle, and the wing slips behind the part of the ear which Google suggests is called the antitragus.

Once inserted, they proved 100% secure. They never fell out or even felt like there was the slightest chance they would.

They are perfectly comfortable for me. My longest continuous usage was a two-hour train journey, and I scarcely knew they were there.

There are two volume buttons on the left earphone, and the usual multi-function button on the right. Press once to play/pause, twice for next track, three times for previous track and hold down to activate Siri.

Their small size makes the controls slightly awkward to use – even a week in, I was still having to feel for them – but I think that’s unavoidable at this size, and it’s not like AirPods controls are great either. With anything this small, you’re going to be better off using your phone as the controller.

There’s also the same auto-pause/play feature as AirPods, pausing when you remove one from your ear and resuming when you reinsert it. However, while AirPods will happily resume if you reinsert one a minute or two later, the MW07 times out after eight seconds – which is too short when you remove one to answer a question, listen to a PA announcement or similar. It’s not like it’s a big deal to hit the play button to resume, but auto-pause and -resume is a really nice feature, so I’d prefer a significantly longer timeout.

I don’t think it’s physically possible for in-ear headphones to create the same level of immersive sound you get from on-ear or over-ear ones. Driver size is far from the only thing that matters with headphones, but it is one factor. Even when you place a tiny driver right inside your ear, there’s only so much air it can push.

AirPods, for example, have 9mm drivers, compared to the typical 40mm drivers of decent on-ear headphones. The MW07 have 10mm drivers, which are the largest you’ll find in-ear, and they are made of beryllium, a material used only in high-end Hi-Fi equipment. The stiffness and lightness help compensate for the size, and the cost of the material likely goes a long way toward explaining the $299 price tag.

But while no in-ear headphone can match the performance from their larger brethren, the MW07 come closer than any others I’ve yet tried. The sound is simply stunning for the size.

The audio is beautifully neutral, especially noticeable in live performances where you can really feel you are there in the room.

Both treble and mid-tones are clear and detailed, and the bass is really impressive. But while the bass has real presence, it doesn’t feel in any way artificial – the balance is spot-on.

There’s also plenty of volume. Even on public transit, I never use them at maximum volume, which I think is another impressive achievement from in-ear units. But if you do crank them up to the max, there’s no distortion.

For pure audio quality, these are hands down the best in-ear headphones I’ve ever used – and that includes B&O H5s.

For plane travel, where I want longer battery-life and the option of wired connection to the in-flight entertainment, I’ll take my P5s. But out and about in London, I’ve now switched to these – and that really says a huge amount about their quality.

For some, that may be important. For me, it’s not. On flights, I’m going to take my P5s. Any other time, I’m never going to be listening for more than a couple of hours at a time, and I’m never going to get anywhere close to 14 hours in a day.

I haven’t been able to test the 3.5 hours claim simply because I’m never going to listen that long in one go, but I did hit around 2.5 hours on one journey and they were still going strong.

Having previously been impressed by Master & Dynamics headphones, I was expecting these to be good. But not as good as they turned out to be. I really didn’t expect to be switching to these as my daily drivers when mobile in London.

We all have different ears. I have true audiophile friends who spend four-figure sums on their headphones (and would probably spend five if they could). At the other end of the scale, you may not hear any difference between AirPods and higher-quality headphones.

$299 is quite a lot of money at almost twice the price of AirPods, but if – like me – your ears fall into Bang & Olufsen or Bowers & Wilkins territory, the MW07 justify every penny of the difference.