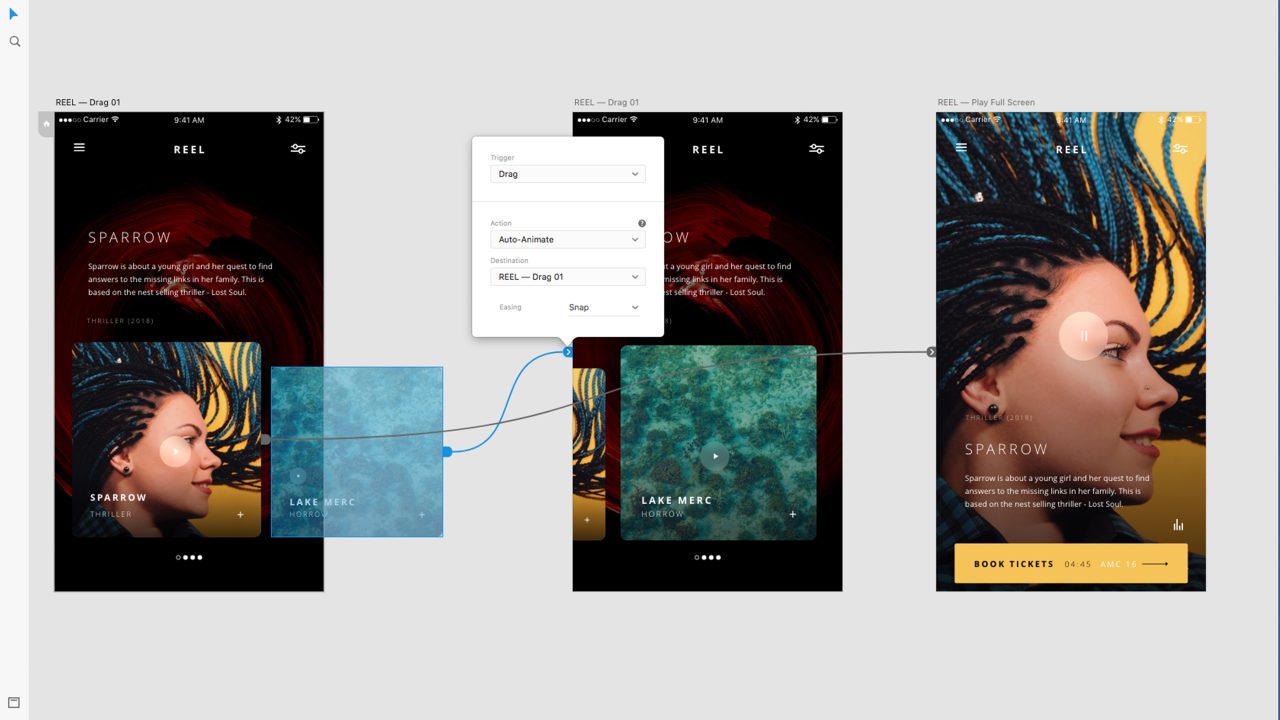 Since 2014’s “Prototyping: Fake It Till You Make It” WWDC session, Apple’s Keynote app has become a popular tool for designers and developers looking to make quick and easy app prototypes and concepts. Alongside the rise of Keynote, several other dedicated prototyping tools have grown in popularity as user experience design gains traction as an essential part of the app development and design process. One of those tools is Adobe XD, formally launched as part of Creative Cloud during 2017’s Adobe MAX conference and updated yesterday with voice prototyping.

Now that the application has had a year to mature and grow a more robust feature set, I asked Adobe how Keynote users looking to explore in-depth prototyping can easily make the jump to a more powerful tool.

Keynote wasn’t built for prototyping and predates iOS app development by several years. While basic concepts are possible, users will quickly encounter the app’s limits. Cisco Guzman, Group Product Manager for Adobe XD, tells me that when you hit the app’s functional ceiling, it’s time to look for a more robust solution. “Keynote was developed to be a presentation tool, and it’s an amazing presentation tool. But there are things that you become acutely aware of when you’re using it or any other product, where you say, ‘Hmm, this isn’t really the strike zone anymore.’”

No matter what tool you choose, the goal of prototyping is the same: communicating the essential concept of your app. “Pick a story that you’re trying to tell,” says Guzman. “Then pull XD out and start using it. It’s the first tool I can think of that ships to allow you to move in and out of the design thinking process.”

Mark Webster, Director of Product at Adobe, echoes the sentiment, noting that both Keynote and XD’s workflows begin in the same place. “Tactically, whatever your starting point would be for prototyping in Keynote – you’re getting assets from somewhere. Maybe you have a UI kit of a bunch of off-the-shelf components. You can start the same with XD. If you know how to use Keynote, you’ll pick up XD immediately. You’ll start to discover this vision of context awareness, of showing you the right tools at the right time.”

“Develop [the prototype] to a certain level of fidelity, expose it, get it out there, come back in, iterate some more, put it out there again. I feel like that round trip of storytelling is an easy way to understand every part of the system,” Guzman added. 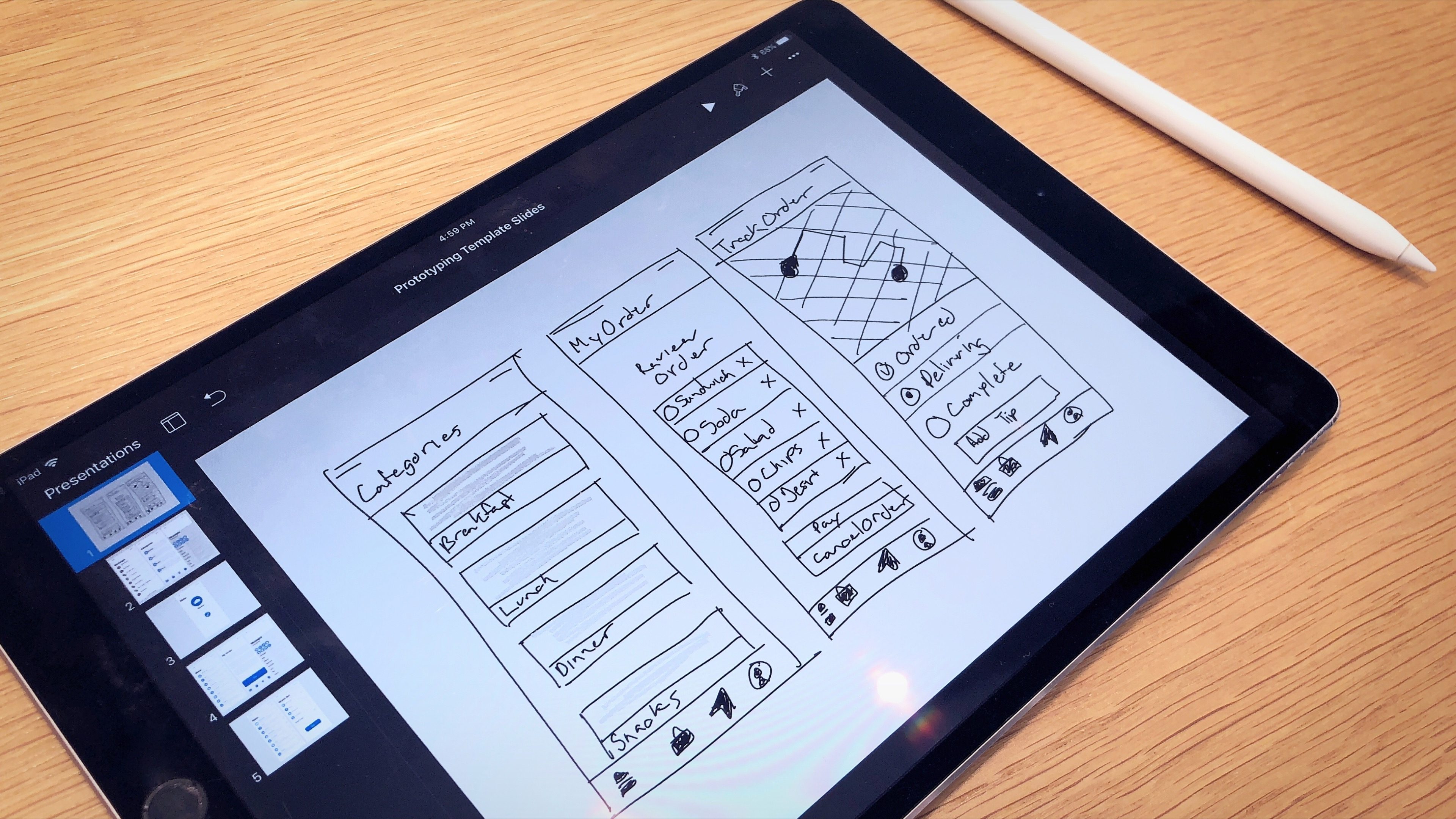 Prototyping in Keynote for iOS.

While Keynote is available on both macOS and iOS, Adobe XD is built primarily for macOS and Windows. Prototypes can be viewed on an iPhone using a companion application, but creation happens on the desktop. This makes Keynote compelling for designers who prefer creation on iOS. Apple has even started to offer Today at Apple sessions built specifically around learning how to prototype on an iPad.

Guzman argues that we shouldn’t assume content creation must always be the primary workflow on mobile devices. “I think it’s really applicable to think of how a stylus with a flat surface really unleashes so much illustration potential, photo retouching potential. A UX designer needs and uses different controls. Maybe it starts with really prioritizing content editing verses starting from scratch.” Webster adds that XD is still in its infancy, and the product will continue iterating to include new ways of working. “A lot of those [mobile first] workflows have products that have been around for a long time. XD is one of the newest of Creative Cloud tools.”

Software differences aside, no tool is “wrong” for the job if it lets you communicate your work. Whether it’s Keynote or Adobe XD, Guzman trusts the judgement of creators. “One thing that I think designers are infamous for is being resourceful. We use whatever it is we have to get where we need to go. I think that we know and understand the limitations of our own toolset.”

Plugins need to be registered through our Adobe I/O console. This is also where developers will submit plugins to be distributed through the in-app plugin manager.

We expect developers to test their plugins for functionality and quality, but any plugins submitted to us for distribution through our plugin manager are also reviewed by our integrations review team to ensure plugins comply with the guidelines mentioned above. They will manually review each plugin before it is approved to be distributed through our plugin manger. This review team will make sure the plugin functions appropriately (doesn’t have major bugs, doesn’t degrade the performance of the application, loads in a timely manner, etc.), doesn’t contain inappropriate content and complies with our legal, branding and marketing policies.

Plugins will not be permitted to go through our distribution mechanisms if they violate our policies or guidelines. All developers that use our APIs and SDKs must agree to our developer terms.