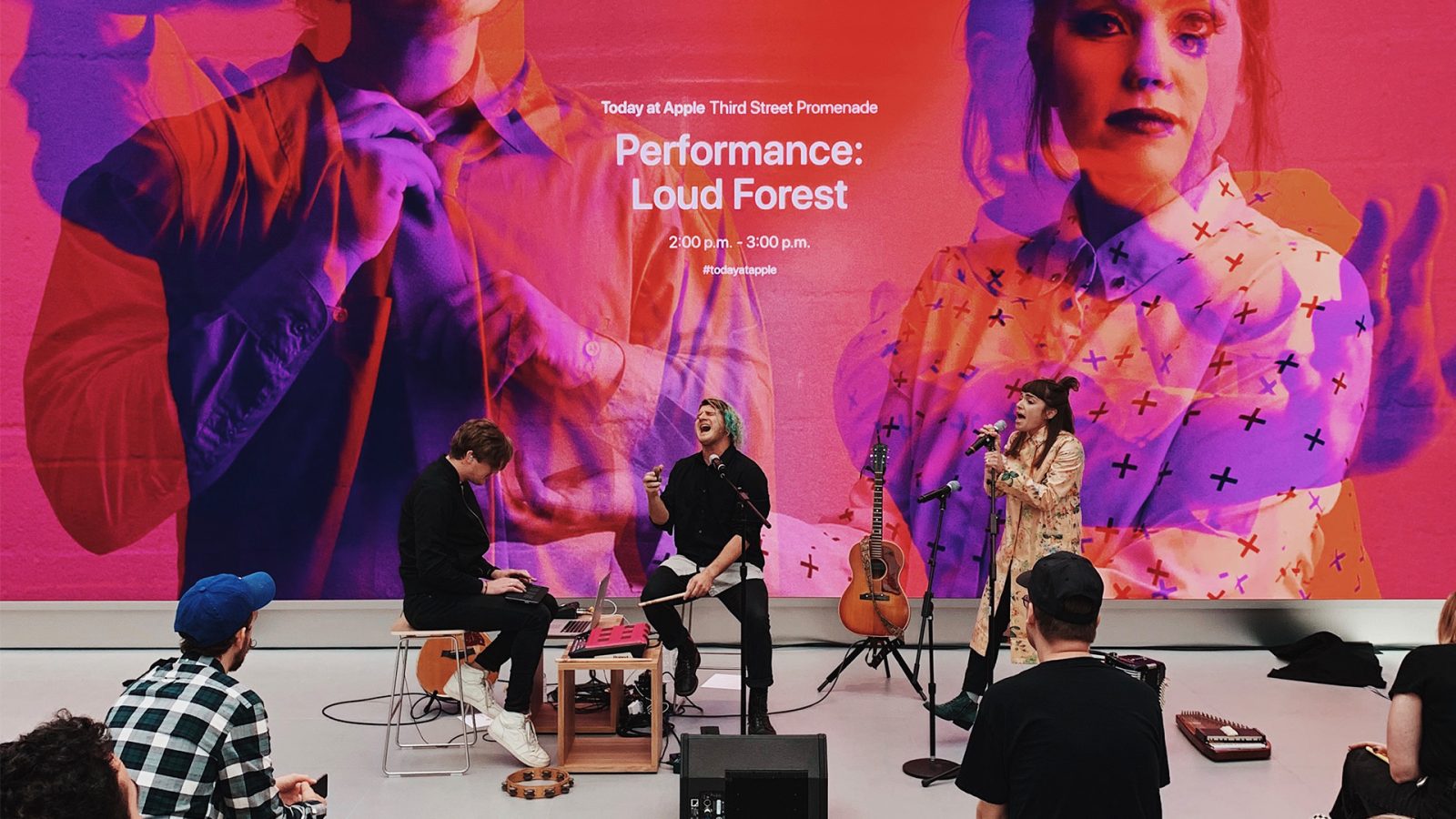 Two Apple retail stores returned to the Pacific coast today. Apple Third Street Promenade in Santa Monica, California and Apple Alderwood in Lynnwood, Washington both reopened with reimagined designs. The openings come just hours before Apple will unveil its newest flagship location in Paris which houses a towering Forum on the historic Champs-Élysées.

“For all the imagination under the sun,” reads the slogan Apple chose to promote the expanded capacity for Today at Apple sessions along the Santa Monica Pier. Like its smaller architectural twin in Palo Alto, Apple Third Street Promenade is one of many classic stores across the globe to receive a Forum and Video Wall this year. Over 70 stores worldwide will be granted similar upgrades next year.

Unlike smaller indoor mall stores, Third Street Promenade also received new Avenue displays, graphic panels, and dual living walls in place of previous inset product tables. A private Boardroom has been added. These new fixtures, combined with a set of six indoor trees nestled around the Forum seating to create a Genius Grove, make the remodeled space feel more welcoming even if you aren’t attending a Today at Apple session. 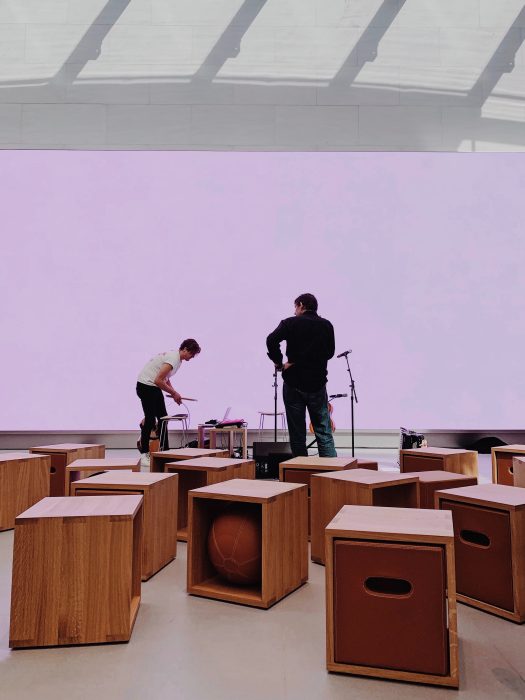 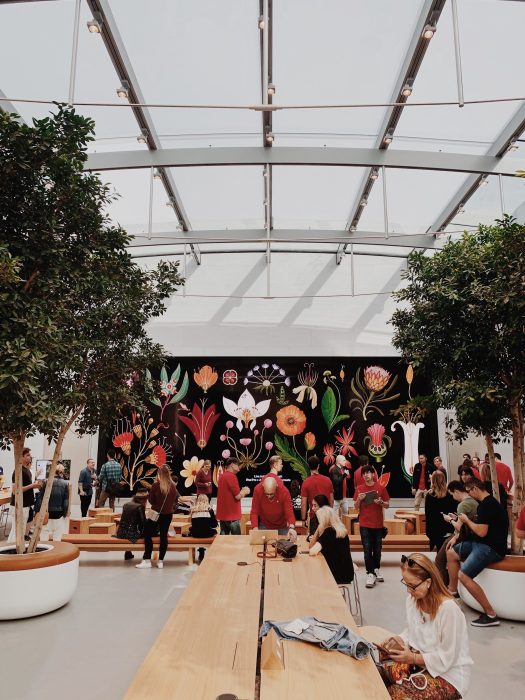 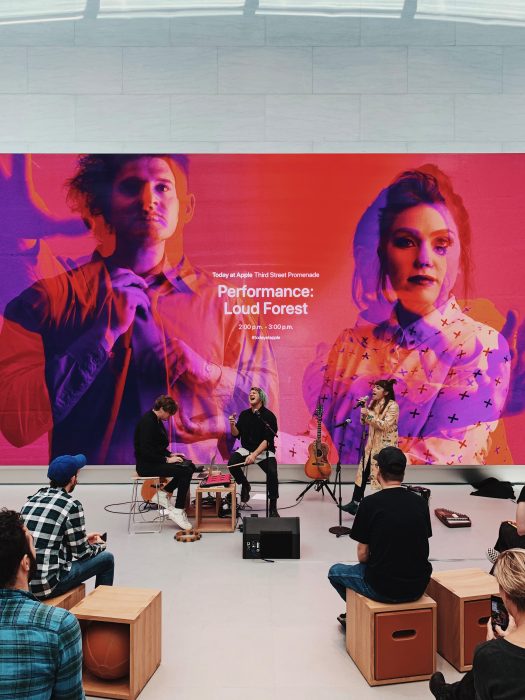 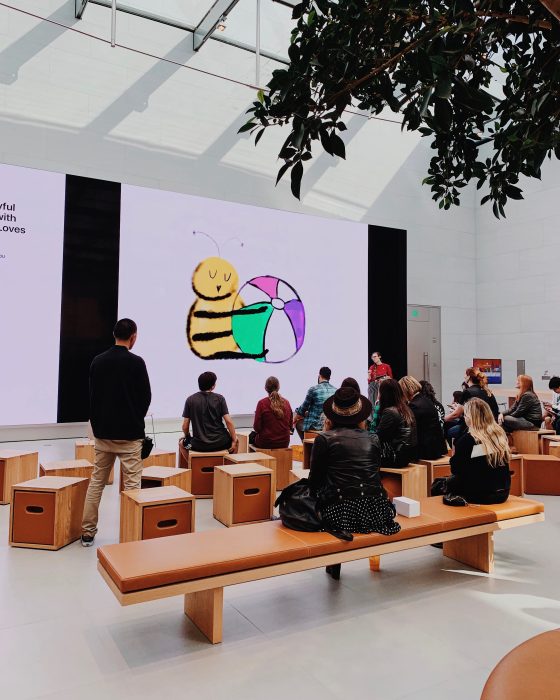 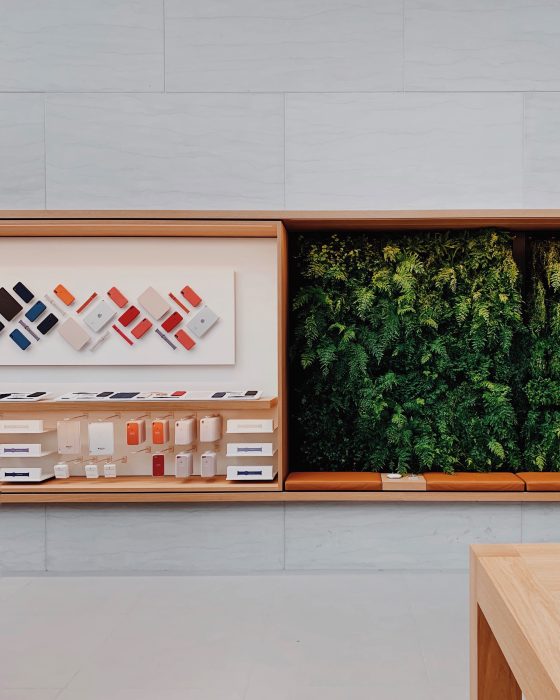 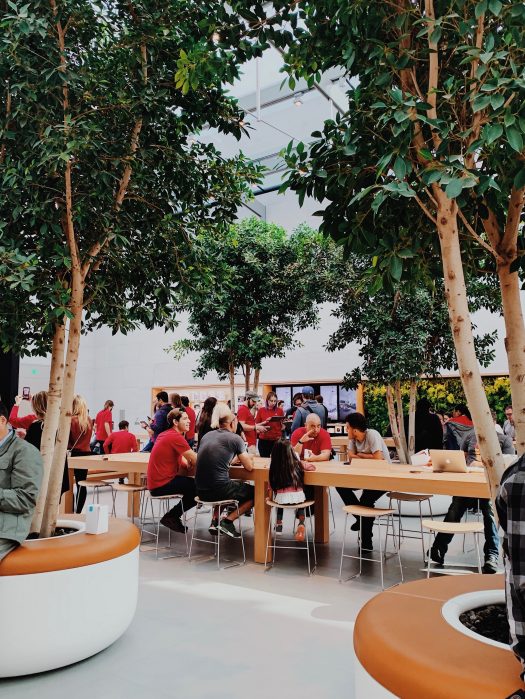 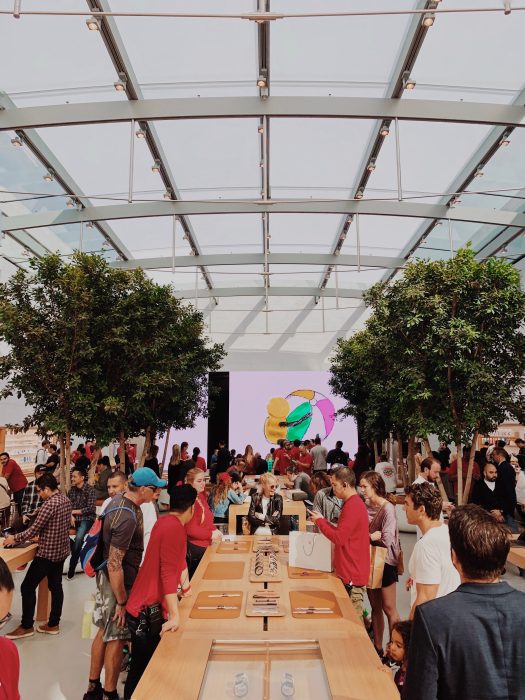 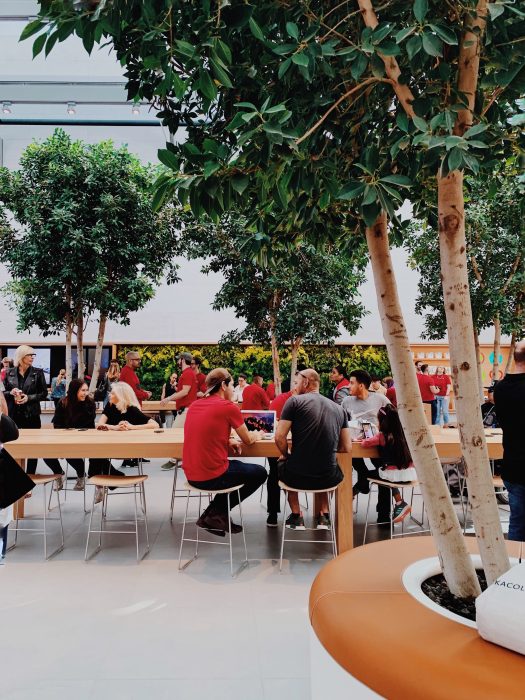 For fans who haven’t yet visited a store with Apple’s latest retail design, Santa Monica now offers a good example. While the store retains its iconic glass roof, arched facade, and tile floors, the overall feeling is more contemporary and less iPod-era.

Prior to remodeling that began earlier this year on September 16th, the store was already one of Apple’s most impressive in Southern California. The current building opened in December 2012 and stunned online audiences with its architecture. The store replaced a smaller nearby location that first opened in 2003.

As we previously detailed, Apple has lined up several exclusive free sessions and performances to welcome visitors back. When 60 new sessions launch next year, Third Street Promenade is sure to be a popular spot to attend a Photo Walk.

In addition to dropping the “mall” from its name, the new Apple Alderwood dropped its stainless steel paneled look and Genius Bar as the space was widened into adjacent tenant spaces. A low-profile, wood planked overhang above a wide glass curtain now defines the store’s facade.

Like in Santa Monica, Lynwood’s remodeled store is in service of Today at Apple. Seattle-area customers may have already received a taste of the new in-store experience this past summer, when Apple University Village relocated to a contemporary, open-air space with an abundance of plant life. 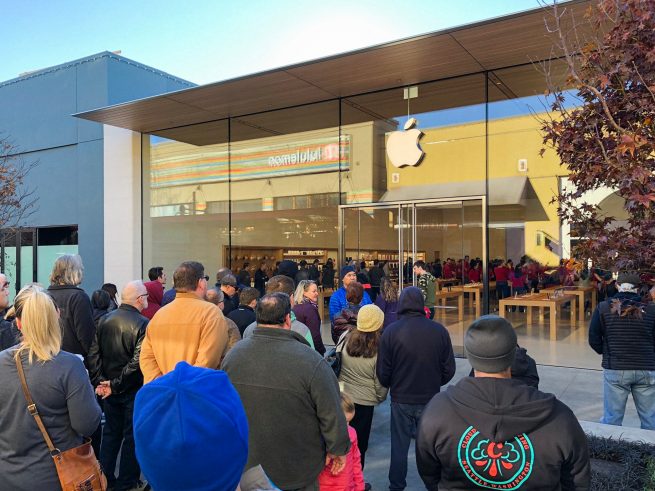 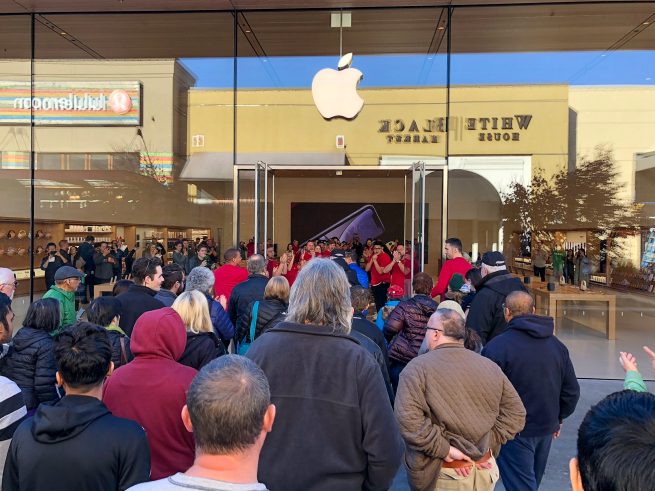 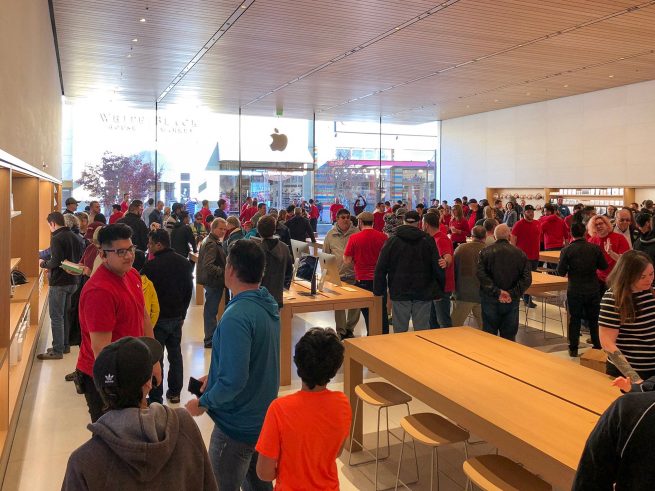 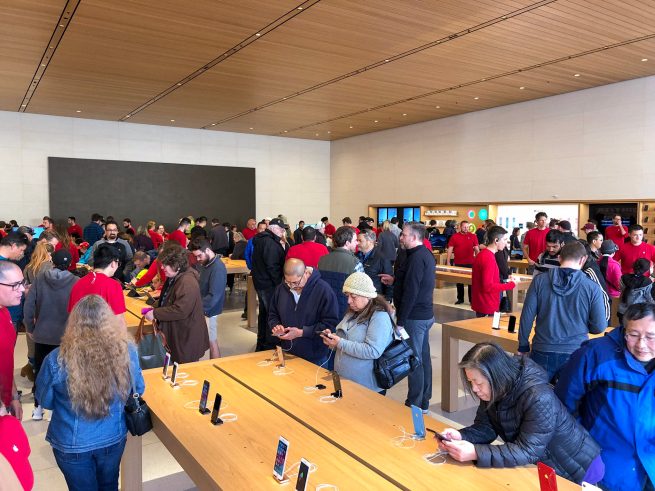 Apple Alderwood is more subdued, but still shares several features with its nearby neighbor. Stone block walls and a wood ceiling give the store a warm feeling without feeling too cozy. Similar designs in the United States are currently found only at Apple Lehigh Valley in Whitehall, Pennsylvania and Apple Southlake Town Square in Southlake, Texas.

Renovations in Lynnwood began on February 25th and continued even as similar stores reopened after shorter closure periods. Apple Alderwood first opened on November 4, 2004 and still retained the majority of its original design until this year’s expansion.

If you attend a store opening, we’d love to share your photos. Stay tuned for more coverage and photos of Apple Champs-Élysées in Paris, and follow along with 9to5Mac’s retail guide for more Apple store news.