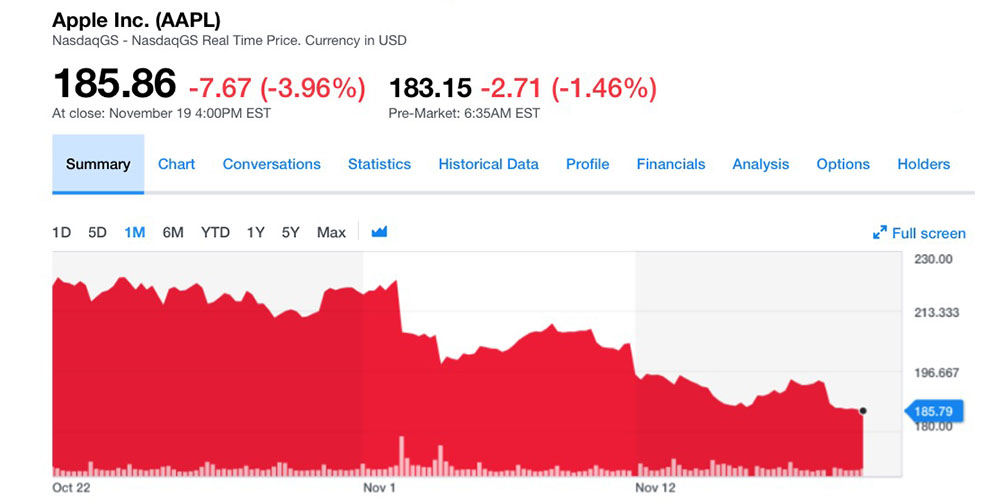 AAPL stock has officially entered a bear market as its stock has fallen more than 20% from its high on October 3. A stock, or a market as a whole, is considered to be in bear territory when its price has fallen 20% or more from its highest price in the past 12 months.

AAPL entered a bear market when it fell by 3.96% in yesterday’s trading, making a total decline of 20.3% in less than two months …

It’s not just Apple either: Fortune reports that all of the FAANG stocks (Facebook, Apple, Amazon, Netflix and Google) are now in a bear market.

Tech investors resumed their selloff of the large-cap FAANG stocks, with the five tech giants all sustaining declines of 20% or more, enough to push them into bear-market territory.

Last month, disappointing forecasts from Apple, Amazon, and Facebook spurred a selloff that is continuing this week. Apple fell 4% Monday after the Wall Street Journal reported that the company cut orders to suppliers for the three iPhone models introduced in September.

Goldman Sachs has just cut its AAPL price target to $182, citing a ‘material risk‘ that the company may miss its own guidance.

However, Seeking Alpha puts the latest development into perspective.

Apple (AAPL), long a darling of Wall Street, is the latest high flying tech name to fall into a bear market. But given that the company is still up 15% for the year, many investors are understandably confused about whether or not the stock is a strong buy at today’s prices, or potentially set to fall far even further.

It notes that while the market was scared by lower-than-expected holiday quarter guidance, and fears of ‘peak iPhone,’ the actual Q4 (calendar Q3) results were strong – and the company is still forecasting revenue growth in a declining market.

The company actually posted 20% revenue growth in the final quarter of its fiscal year, the fastest growth rate in three years […]

The other key growth drivers were services and “other products” which is mostly the company’s wearables (Apple Watch) and HomePod speaker (over 50% YOY growth). Not just did these segments post strong growth, but together accounted for 23% of company sales, showing that Apple is making good progress in diversifying its business from its overreliance on the iPhone.

The site notes that peak iPhone, at least for now, was actually way back in Q1 2017 – and yet Apple has continued to grow revenue. It says that the key metric for investors is earnings per share, which is still expected to continue double-digit growth for a decade to come, thanks to single digit revenue growth coupled to the continued stock buyback program.

So AAPL may well be in bear market territory right now, and that could get worse as the market as a whole slips and investors seek less volatile options than tech. But, argues Seeking Alpha, this could be a good time to buy for anyone focused on long-term returns.