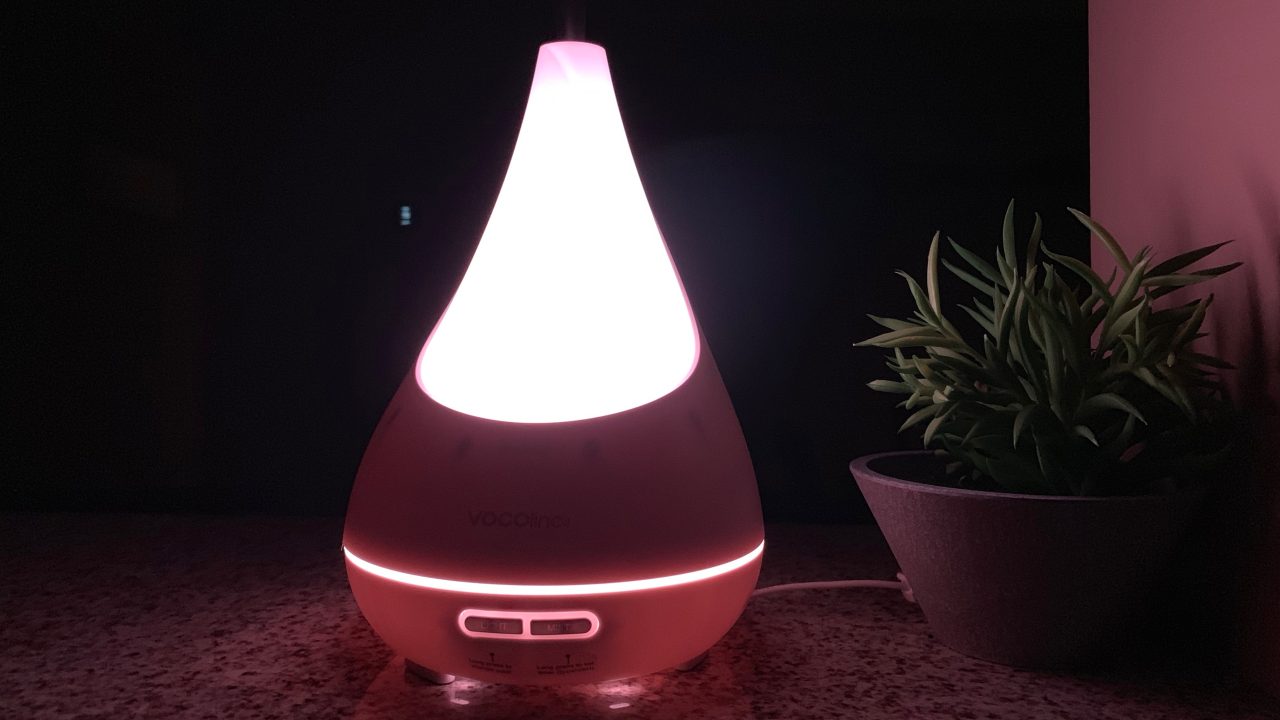 VOCOlinc is a smart home company focused on HomeKit accessories like affordable light strips and the multi-plug power strip. VOCOlinc’s lineup includes the $59 FlowerBud smart diffuser, which is the first and only diffuser that works with Apple HomeKit. FlowerBud lets you burn scented oils to make your home smell like your favorite scent, and the smart diffuser includes a built-in mood lamp. Both the diffuser and mood lamp work with HomeKit and Siri, too, which means Home app and voice control plus much more.

VOCOlinc FlowerBud ships with four pieces: the diffuser base, the vented cover, an oil measuring cup, and the power supply. As its name suggests, the diffuser is designed to take on the shape of a flower, with curves that imitate a tulip bulb. The wide base narrows toward the vent to create a small chimney for the diffuser to let out steam, aroma and all.

The plasticky white hardware features two translucent parts: a ring between the base and the lid, and a curved portion of the lid that covers about 40% of the surface area. These sections blend when FlowerBud’s light is turned off, but glow when the built-in mood light is active.

VOCOlinc includes a 100 mL liquid measuring cup, but you supply your own fragrance oils to mix with water in the tank. Setup is simple: connect the power supply to the base, fill the base with water near the full line (adding water is important here), mix in your warming oil, then place the lid on the base. 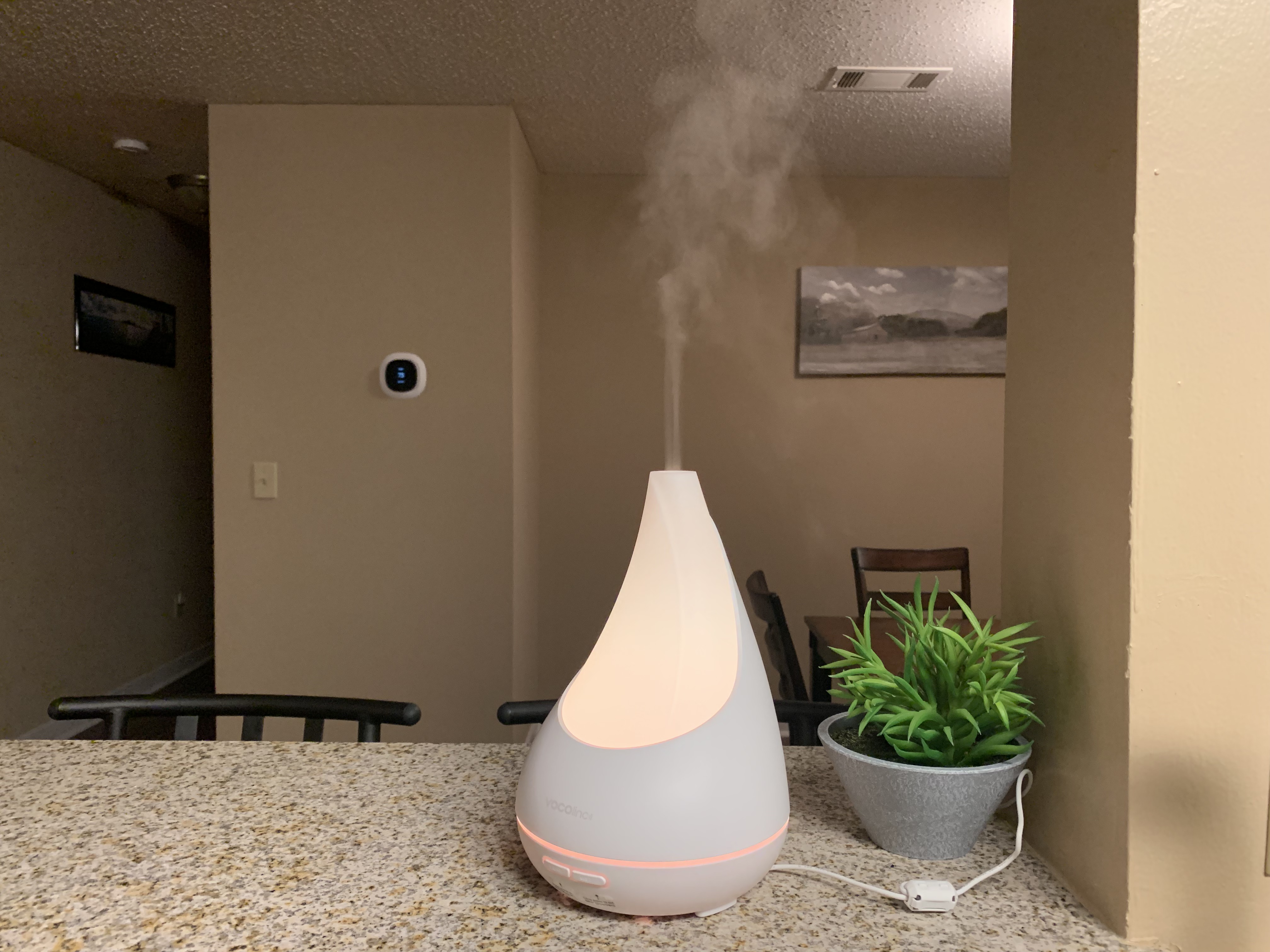 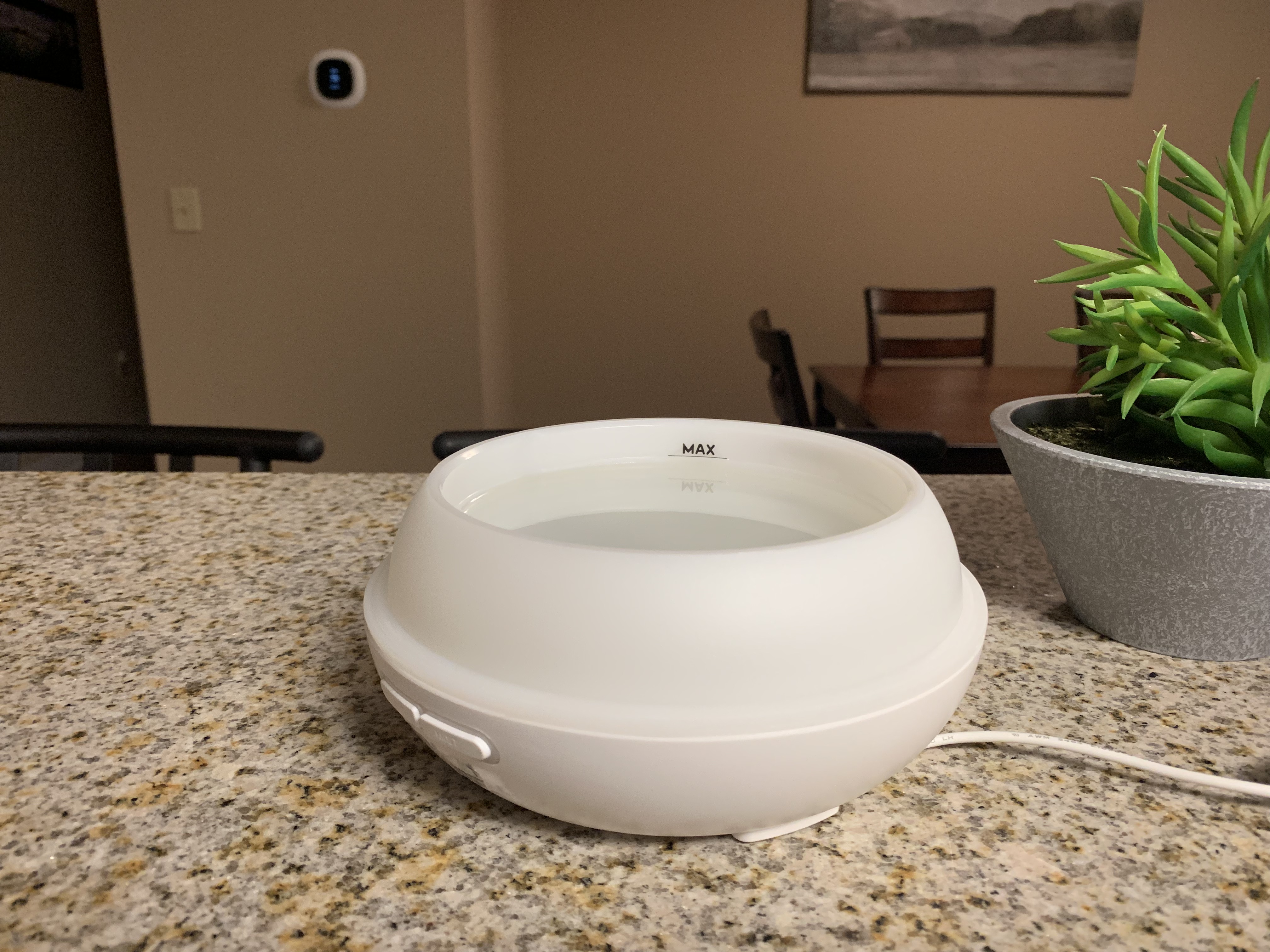 VOCOlinc’s software for controlling FlowerBud, LinkWise for iOS, is fairly typical of smart home accessory apps. It won’t win any design awards, but it does include a few features that you won’t find in Apple’s Home app. The LinkWise app is also required for updating the FlowerBud firmware; Apple’s Home app can detect when accessories need firmware updates but vendor apps are still required for actually updating products. My hardware had a firmware update available out-of-the-box so it’s worth checking during setup.

The LinkWise app lets you monitor water levels, control diffuser humidity levels, and control the built-in mood lamp. You can also control sleep timers that automatically turn off the diffuser after a set amount of time. FlowerBud will run for up to 8 hours before turning off for safety.

Unique features to the LinkWise app include special light effects that you won’t find in the Home app. This is similar to how Philips Hue lights can be controlled in more complex ways using software outside of the Home app. FlowerBud light effects include three modes: breathing (a slow color change effect), flashing (a rapid fire effect), and smoothing (a gentle transition effect).

Each effect lets you customize which colors are included, second intervals between color changes, and brightness level. You can also create your own custom effects with colors and intervals. Flashing is a bit too intense for my taste, but smoothing is pleasant enough that you might launch the LinkWise app occasionally to trigger it.

FlowerBud can be added to HomeKit once it is powered on through the LinkWise app or directly from the Home app on iPhone or iPad. Simply scan the HomeKit setup barcode or enter the seven-digit setup code manually to discover the smart diffuser hardware.

Once added to HomeKit, FlowerBud appears as two separate accessories: a diffuser and a light. You can give each accessory a unique name in the Home app (this is the name Siri will use for voice control) and assign the smart diffuser to a room. Both the diffuser and light be move to the same room but can have different names. 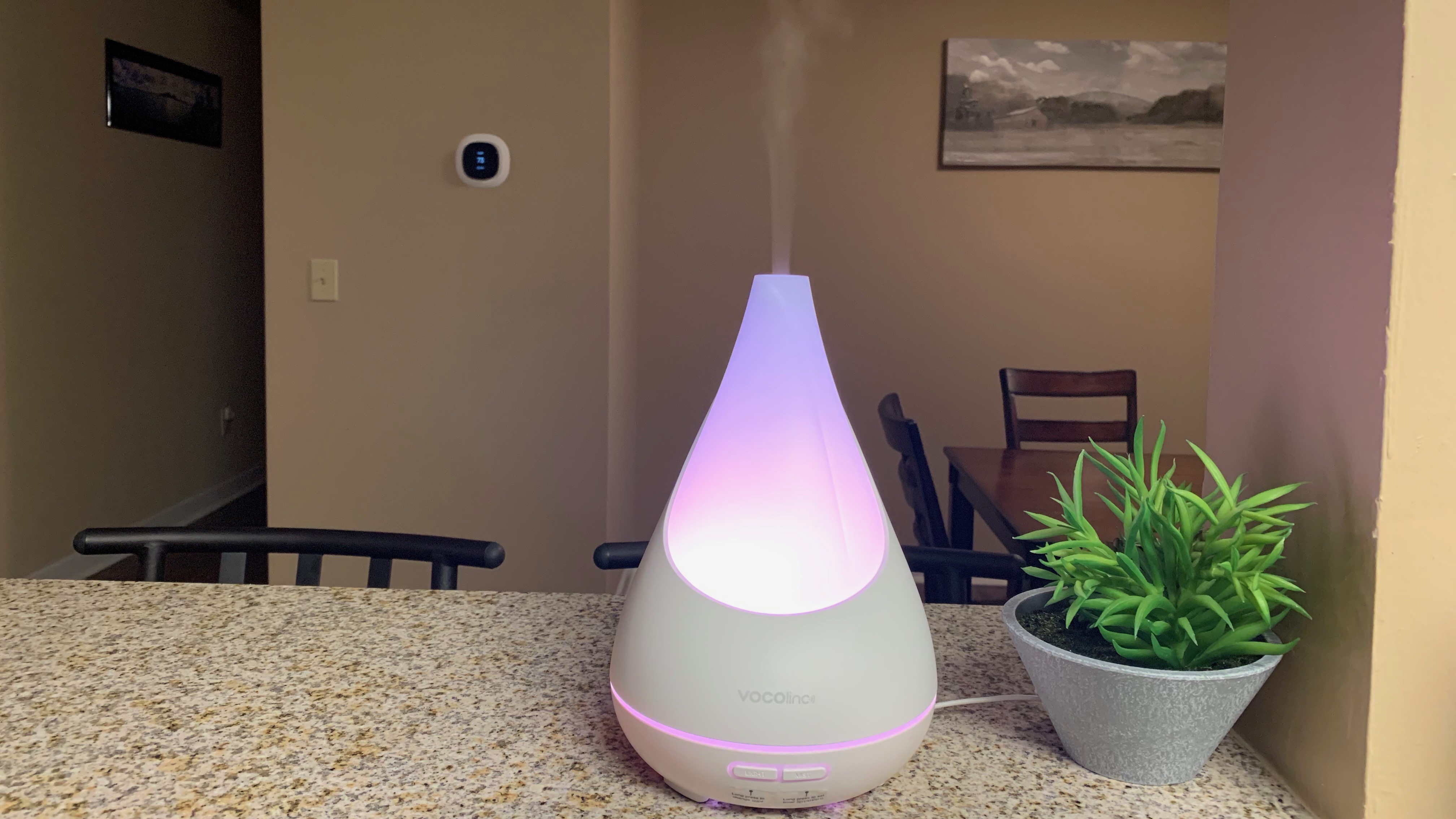 While FlowerBud’s diffuser and light tiles will be tied to the same room, you can optionally favorite either or both tiles so they appear on the Favorites screen of the Home app on iPhone, iPad, Apple Watch, and Mac. If either tile is located as one of the first nine tiles on the Favorites screen, that tile will also be available in Control Center on iPhone and iPad without launching the full Home app.

The diffuser tile lets you toggle FlowerBud’s diffuser between on and off, or you can long press to expand the tile with options for switching modes or adjusting the humidity level between 0 and 100%. A higher percentage means a stronger aroma and a shorter burn time between refills. You can adjust as needed.

The light tile for the built-in mood lamp works just like any HomeKit colored bulb. You can tap the light tile to turn the bulb on or off, long press the tile to adjust the brightness between 0 and 100%, or switch to the color picker to assign any color.

Siri can also control both FlowerBud functions using HomeKit. You can turn the diffuser on and off, adjust the humidity level to a specific percentage, turn the mood lamp on and off, or change the brightness or color using voice control from an iPhone, iPad, Apple Watch, HomePod, Mac, or Apple TV.

HomeKit support means FlowerBud’s diffuser and light can both appear in scenes created in the Home app. You can create a scene like ‘Candle’ or ‘Party Time’ to turn the diffuser on and set the humidity to a specific percentage while turning the mood light on to a specific brightness and color — all in one pre-configured command.

Scenes can also include other HomeKit accessories like smart lights, thermostats, and more. You can activate a scene with voice using Siri, or favorite a scene to include its tile on the Favorites screen to activate it with a tap.

HomeKit also supports controlling smart diffusers with automation. This lets you activate or disable the diffuser with triggers like time of day or location. For example, you can create an automation that turns the diffuser on with a certain humidity percentage when you arrive home. This automation can include an option to turn the diffuser off after up to 60 minutes too. This works great, especially if you enjoy coming home to a nice aroma. 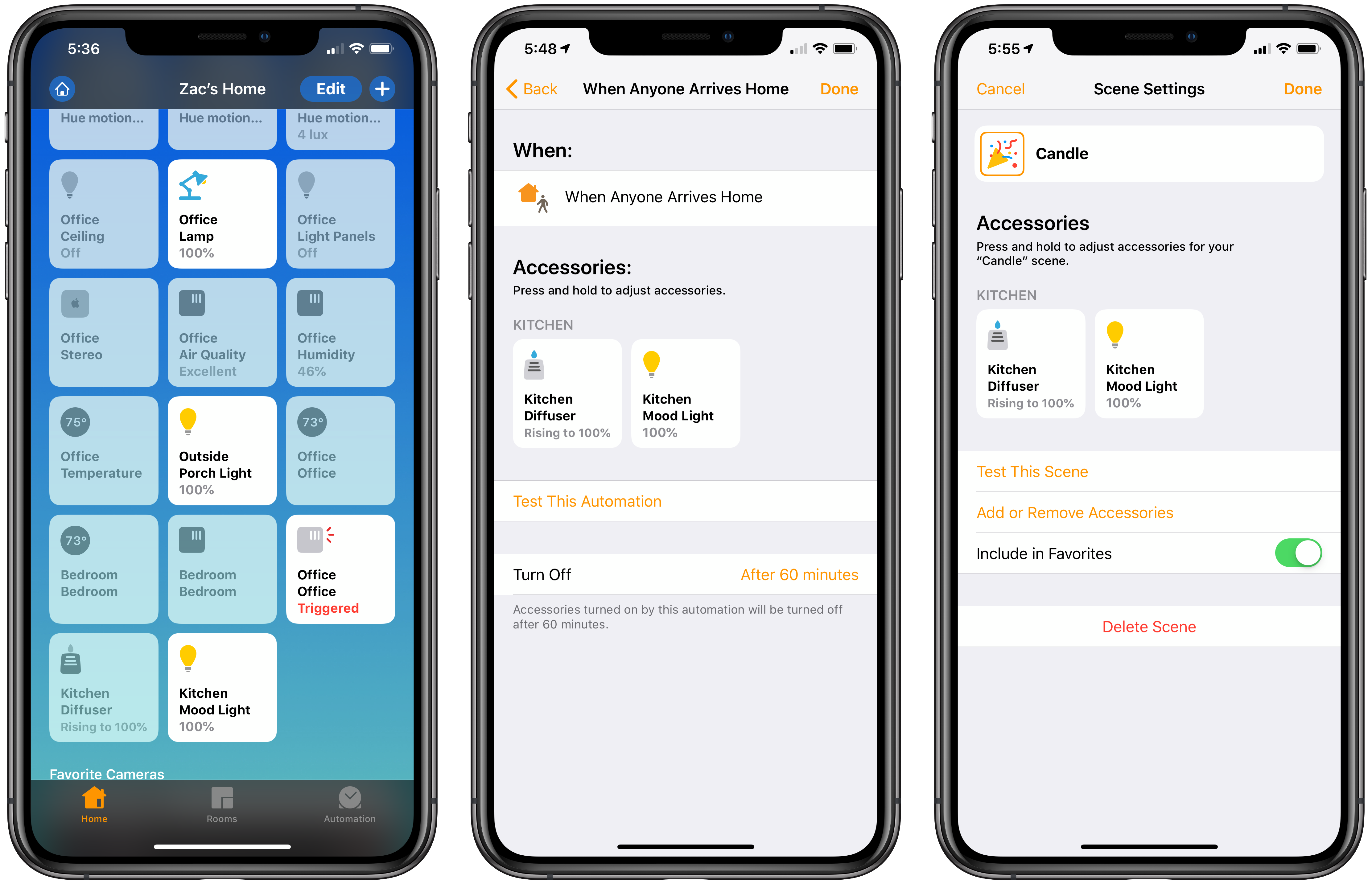 VOCOlinc FlowerBud is a novel smart home product and a neat accessory for HomeKit enthusiasts. The diffuser works great inside the Home app and with automation or Siri control, and the built-in mood lamp adds a smart light as a bonus. The price is also reasonable at $59.99 for a smart home product, especially considering FlowerBud is the first and only product in its category for HomeKit. 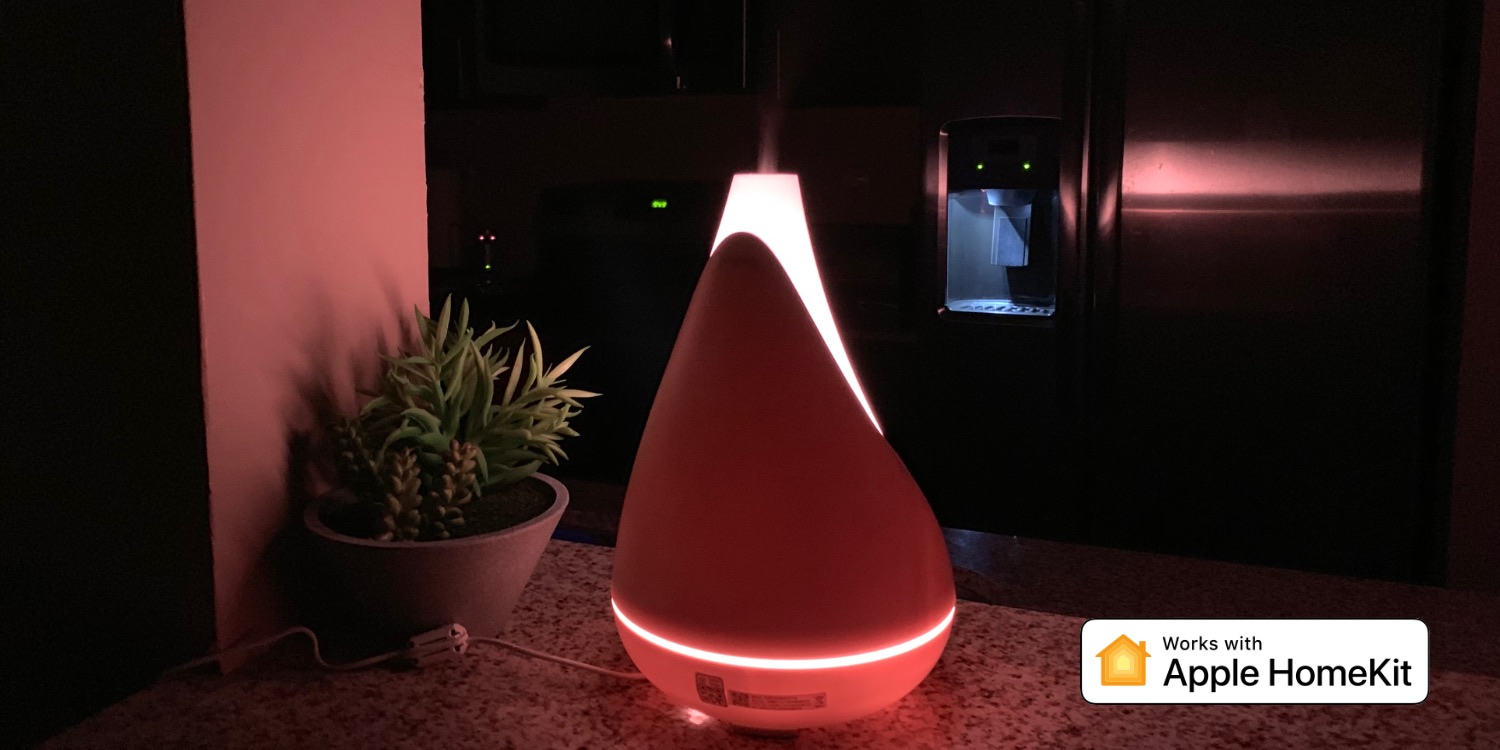 The alternative solution for HomeKit users is to add a basic smart plug for around $25 to a traditional oil burner if you already have the hardware, but that removes humidity control and the built-in mood lamp feature. VOCOlinc FlowerBud is a fun recommendation for HomeKit enthusiasts who enjoy the effects of burning fragranced warming oils or want a safer smart home alternative to burning candles.