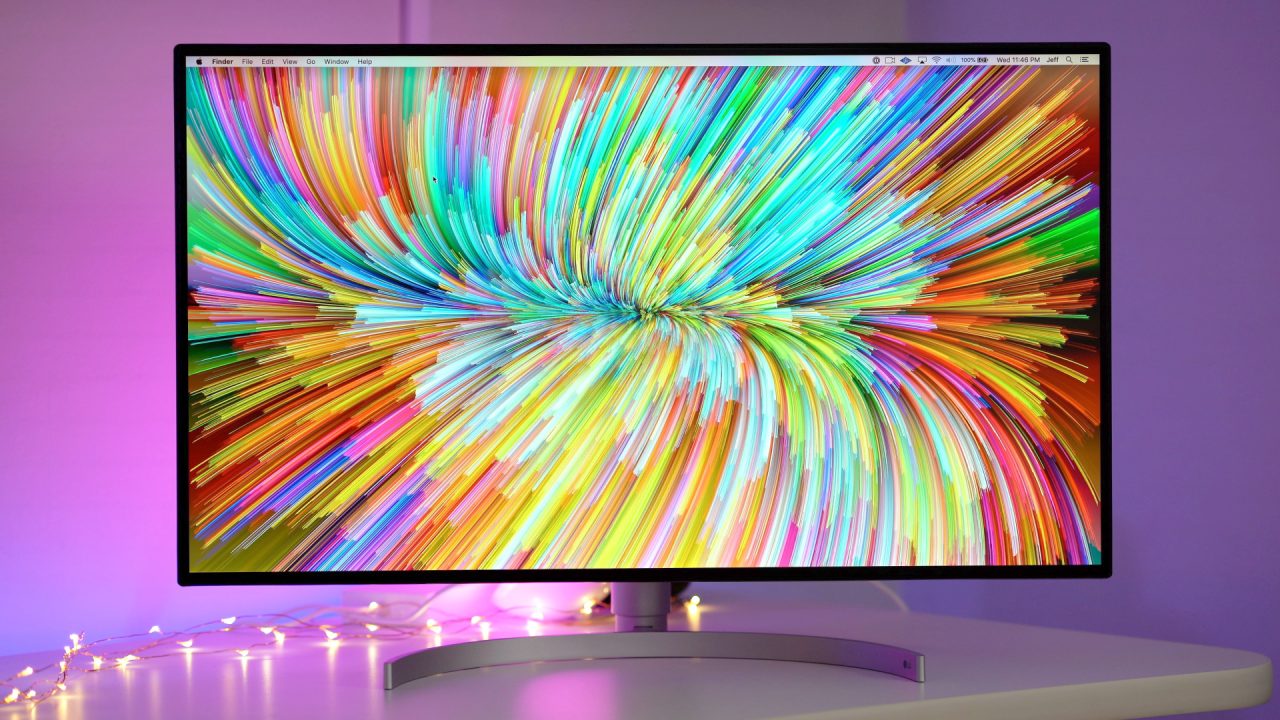 If you’re looking for a Thunderbolt 3-enabled external display, then LG is pretty much where it’s at. Not only does the Korean company produce the 34-inch 5K2K UltraWide Display, which is great for creative professionals, but it also produces an LG UltraFine 4K Display with Thunderbolt 3 in tow.

Not to be confused with the 21.5-inch 4K UltraFine Display that’s sold in Apple Stores, this 32-inch display comes with Thunderbolt 3, and features the familiar LG design language found on many of the displays within the company’s lineup.

Is the LG UltraFine 4K Monitor worth considering for those looking to add an external display to their desktop setup? Watch our hands-on video review for the details.

Inside the LG UltraFine 4K Display box you’ll find the display panel, monitor arm, stand, and a host of cables and accessories. LG makes the process of assembling the arm and stand super-easy, as a simple thumb screw is all that’s needed to make the connection. 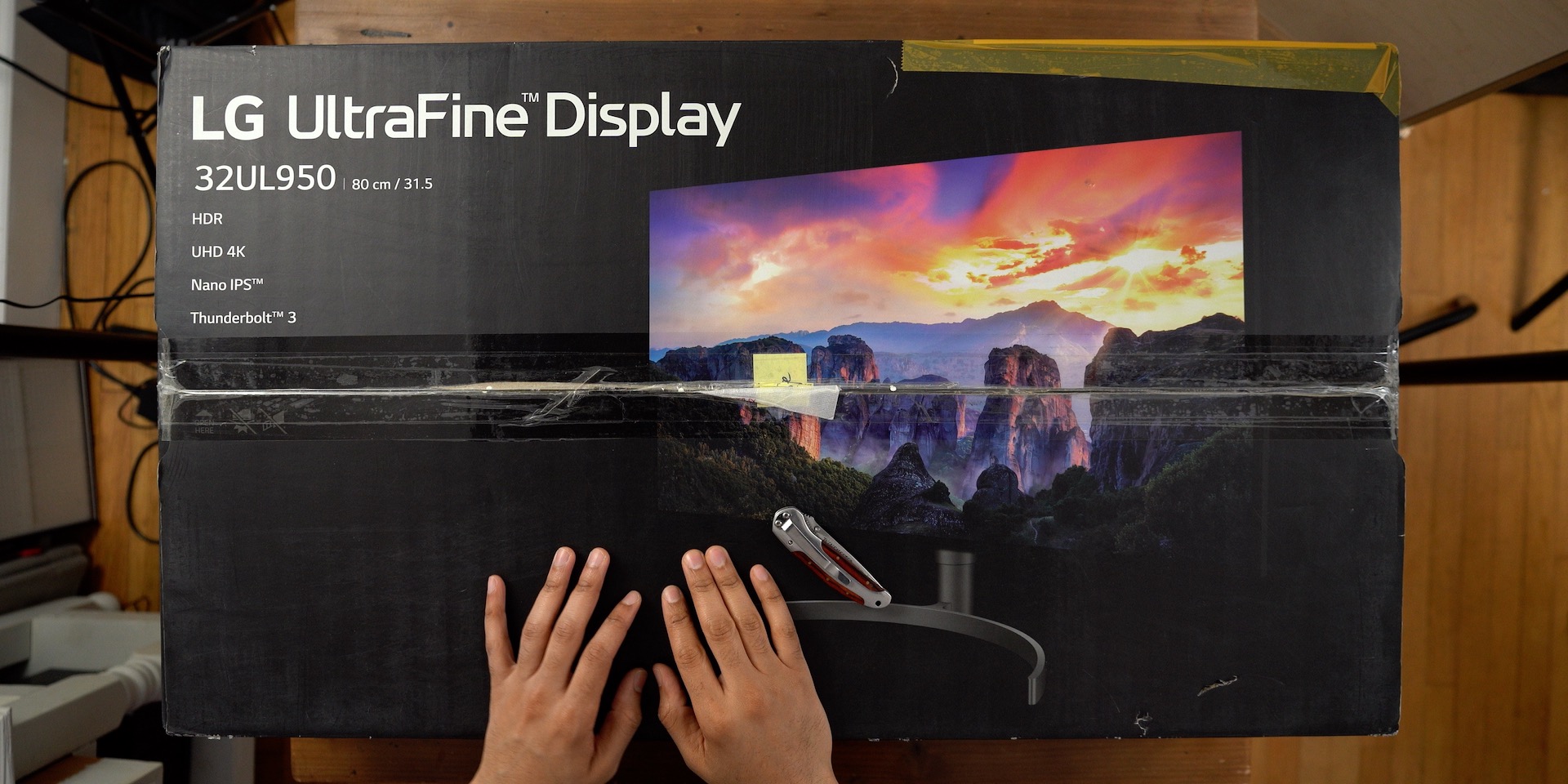 Once the stand and arm are assembled, it’s just a matter of connecting the mount to the back of the display panel. The arm locks into place on the display, but can be easily removed with a simple button press. 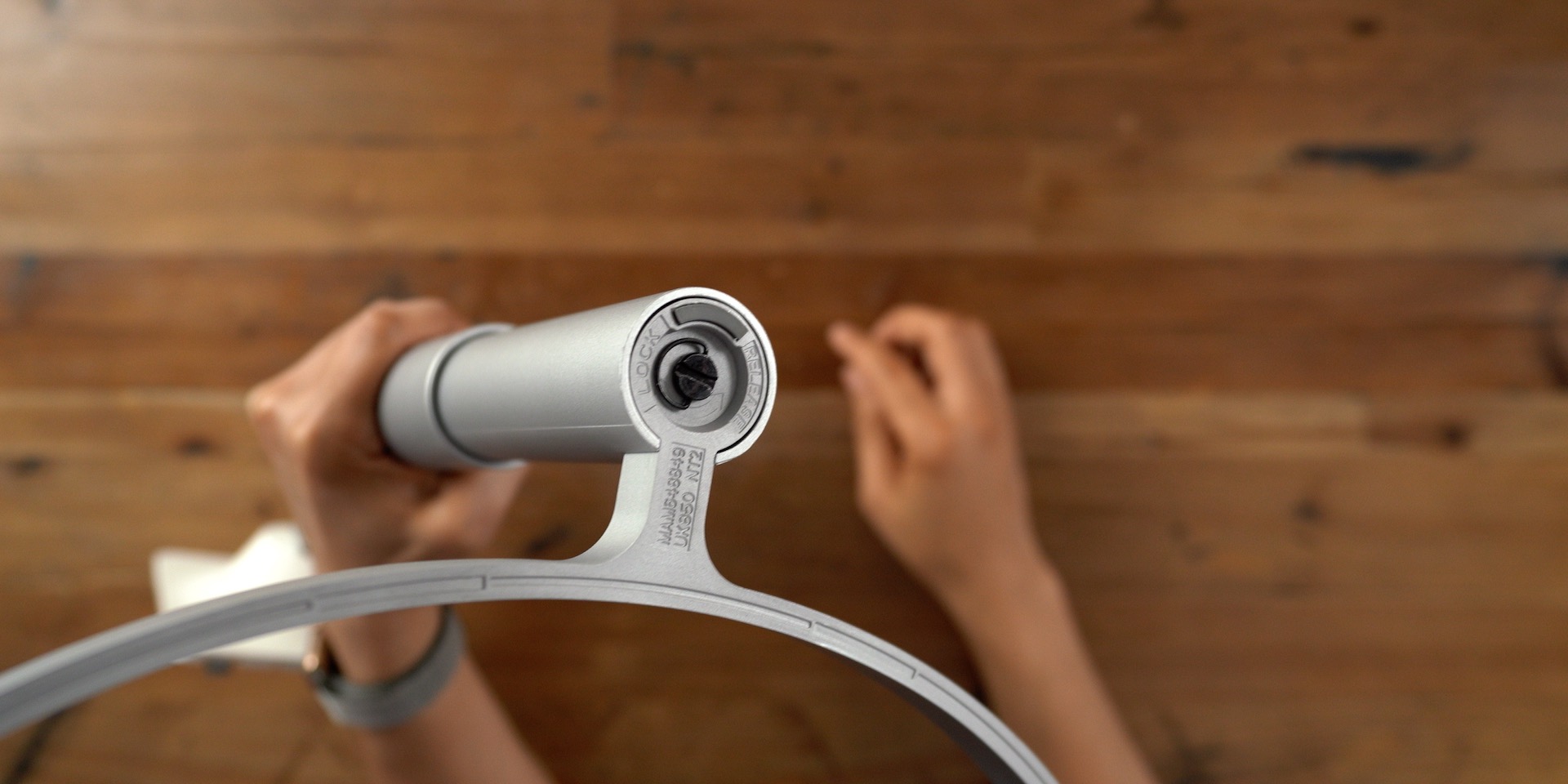 The LG UltraFine 4K Display with Thunderbolt 3 is compatible with standard VESA mounts, which may be more desirable for permanent desktop setups. At higher stand heights, the display tends to get a bit wobbly, and would benefit from a stronger arm. 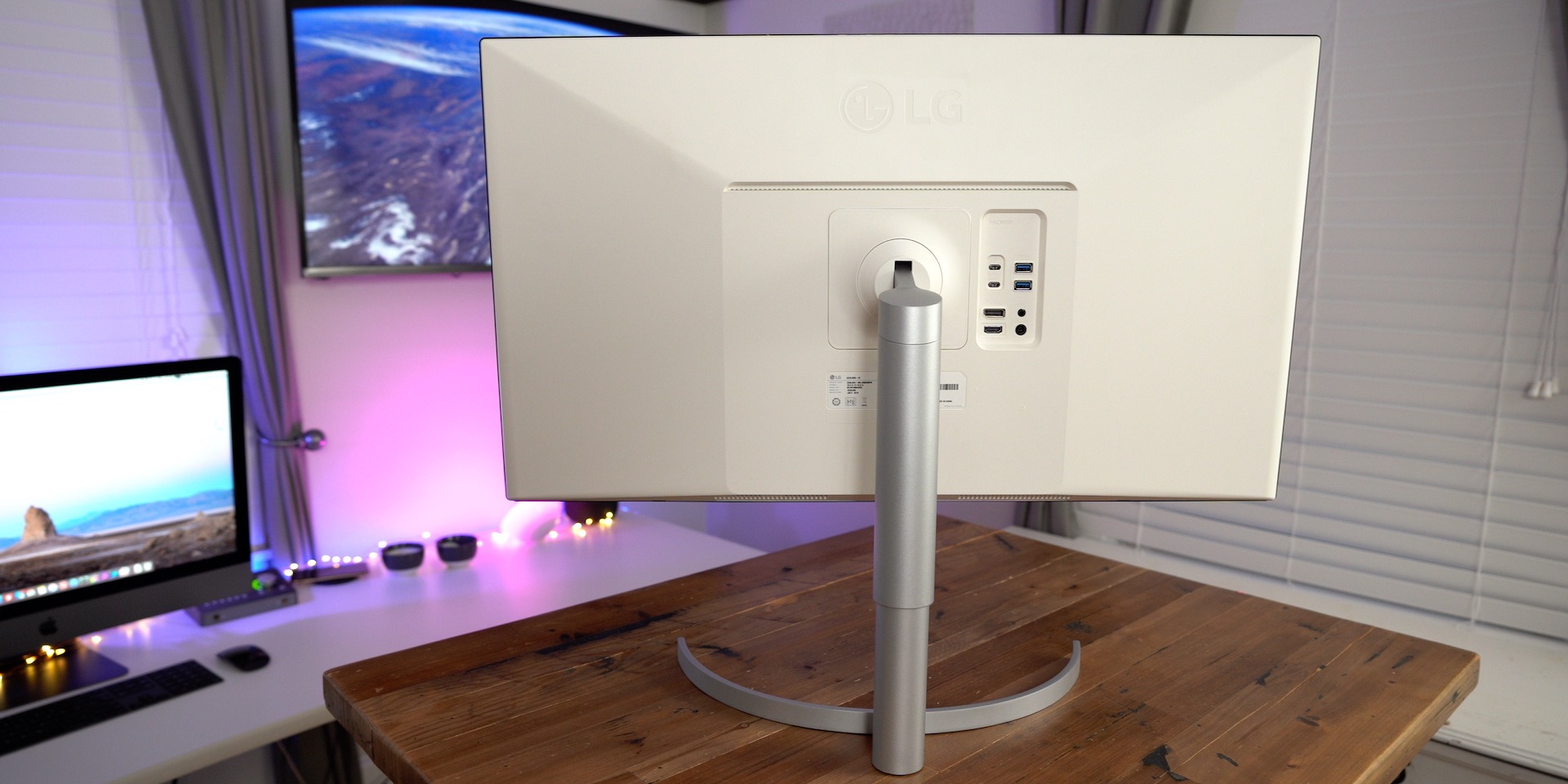 This display features the typical LG design language, with a curved metal stand, faux metal arm, and white display back. One of the most striking things about the panel, outside of its 32-inch diagonal size, is its small bezels. 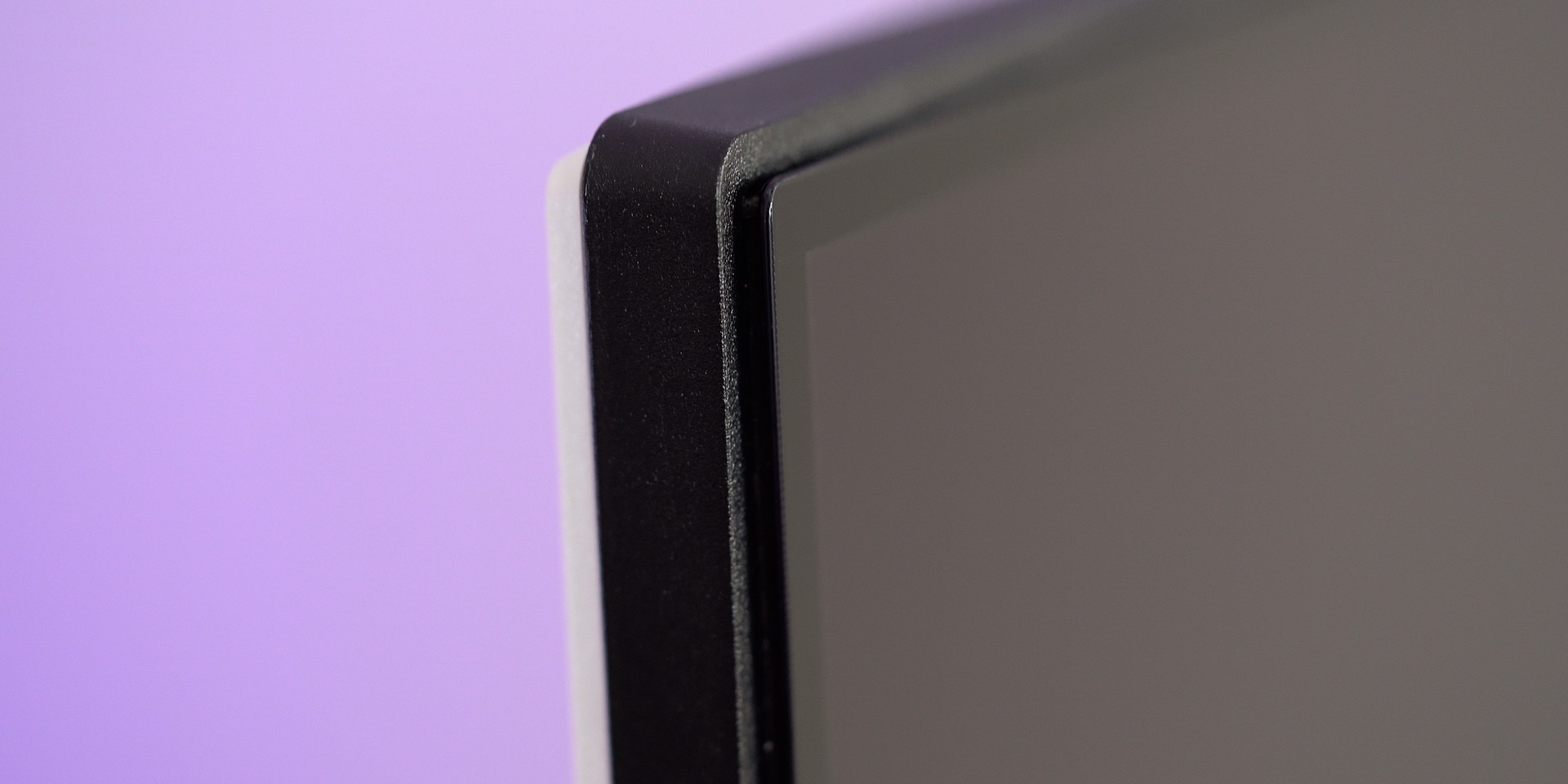 The semi-matte display panel is placed on top of a thin matte black plastic bezel. It’s a good-looking setup although, upon closer examination, the fit and finish doesn’t meet the same standards that you’d expect from an Apple designed product. 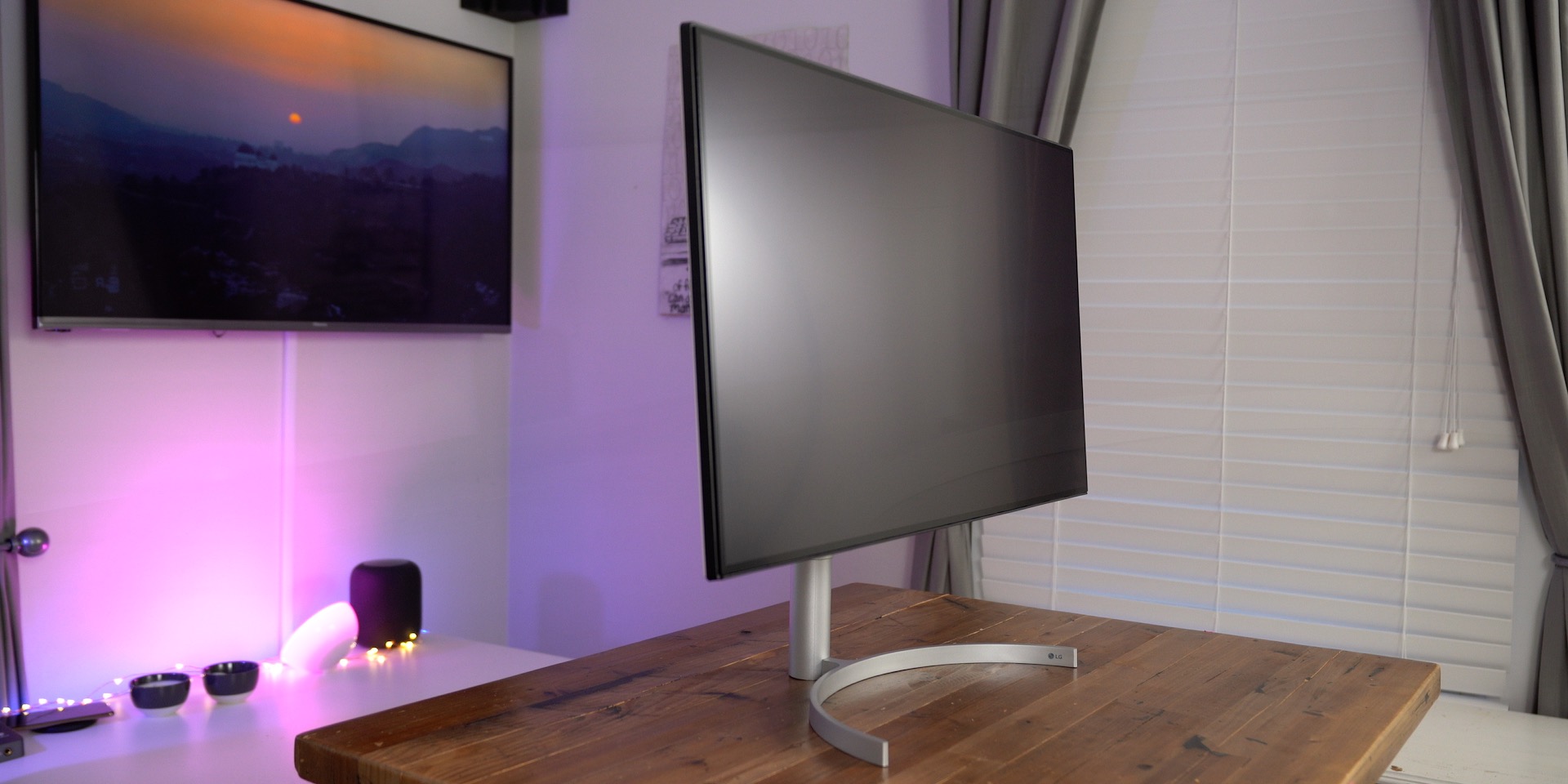 As with most third-party displays, the LG UltraFine 4K is comprised almost entirely of plastic. It can’t compete with the build quality of Apple’s most recent displays, but it’s par for the course as far as most third-parties ventures are concerned.

When compared to the LG UltraFine 4K Display that’s sold in Apple Stores, it’s like night and day from an I/O perspective. The LG 32UL950 is generous with I/O, including dual Thunderbolt 3 ports for daisy chain setups. 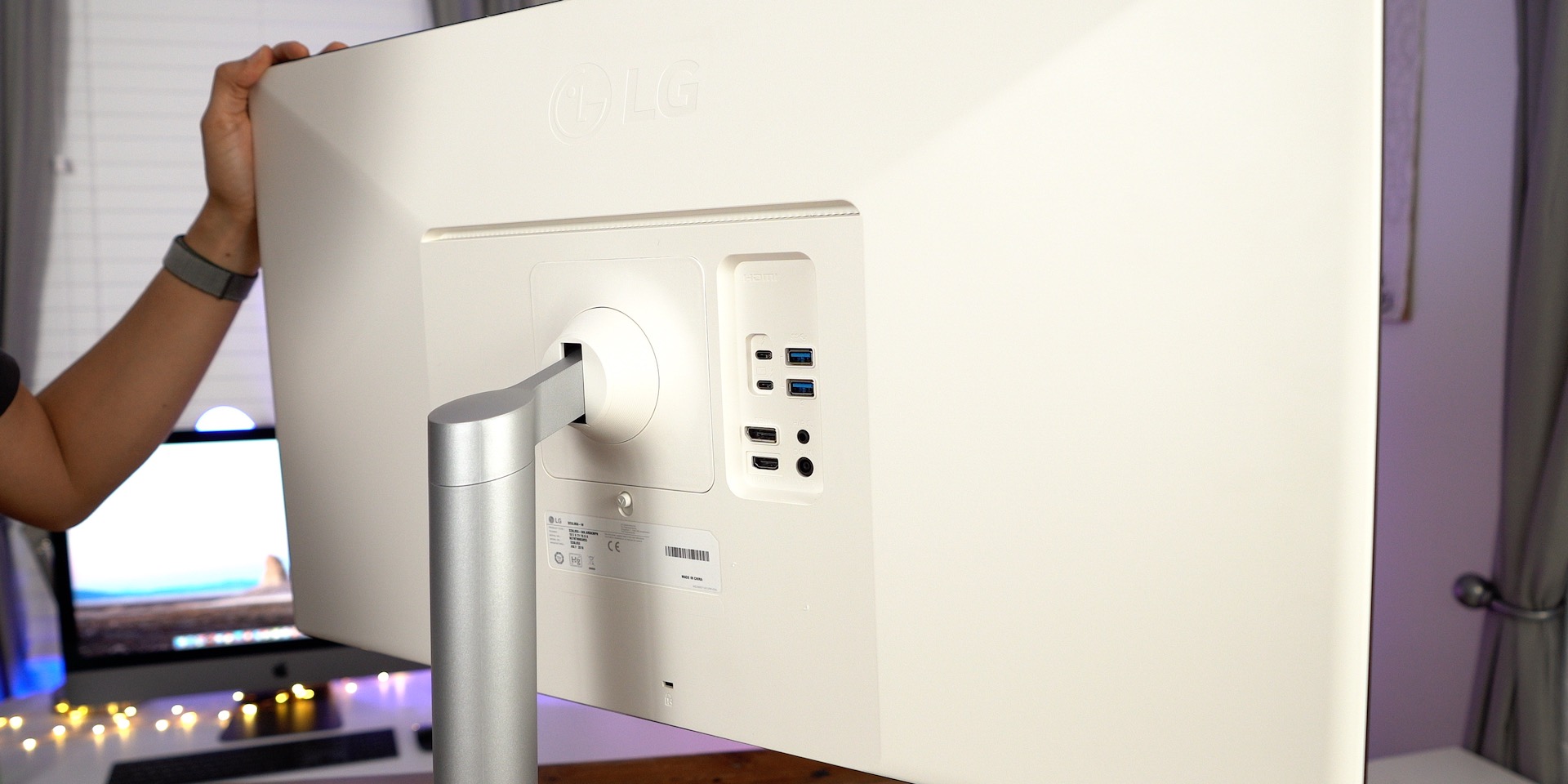 Along with the Thunderbolt 3 ports, which also accommodate non-Thunderbolt 3 USB-C connections, there are a pair of USB-A ports, DisplayPort 1.4, HDMI 2.0, and a 3.5mm headphone port.

The Thunderbolt 3 ports, in particular, are quite compelling. It means that you can connect Thunderbolt 3 peripherals directly to the display, making it function similarly to a dock. 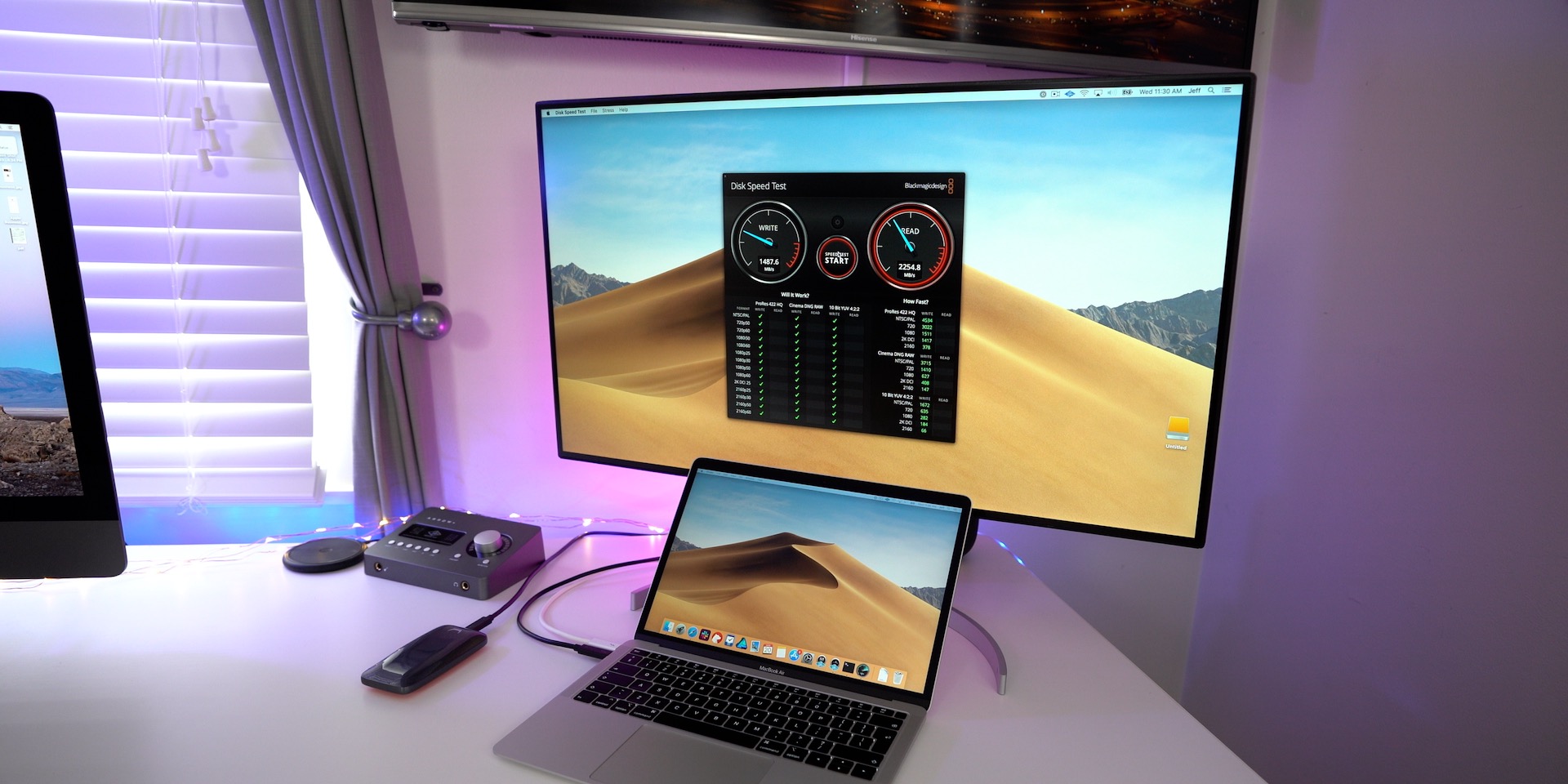 I found these ports to be useful for connecting low-bandwidth peripherals like my Universal Audio Arrow Thunderbolt 3 audio interface. Such a setup allows me to interface with the UA Arrow via a single Thunderbolt 3 connection from the display to my MacBook Air.

If you already have a Thunderbolt 3 dock, such functionality might not seem like a big deal. For those without docks, however, it’s a useful feature to have at your disposal. At any rate, there are now tons of Thunderbolt 3 accessories available for the Mac, so the more ways to connect to them, the better. 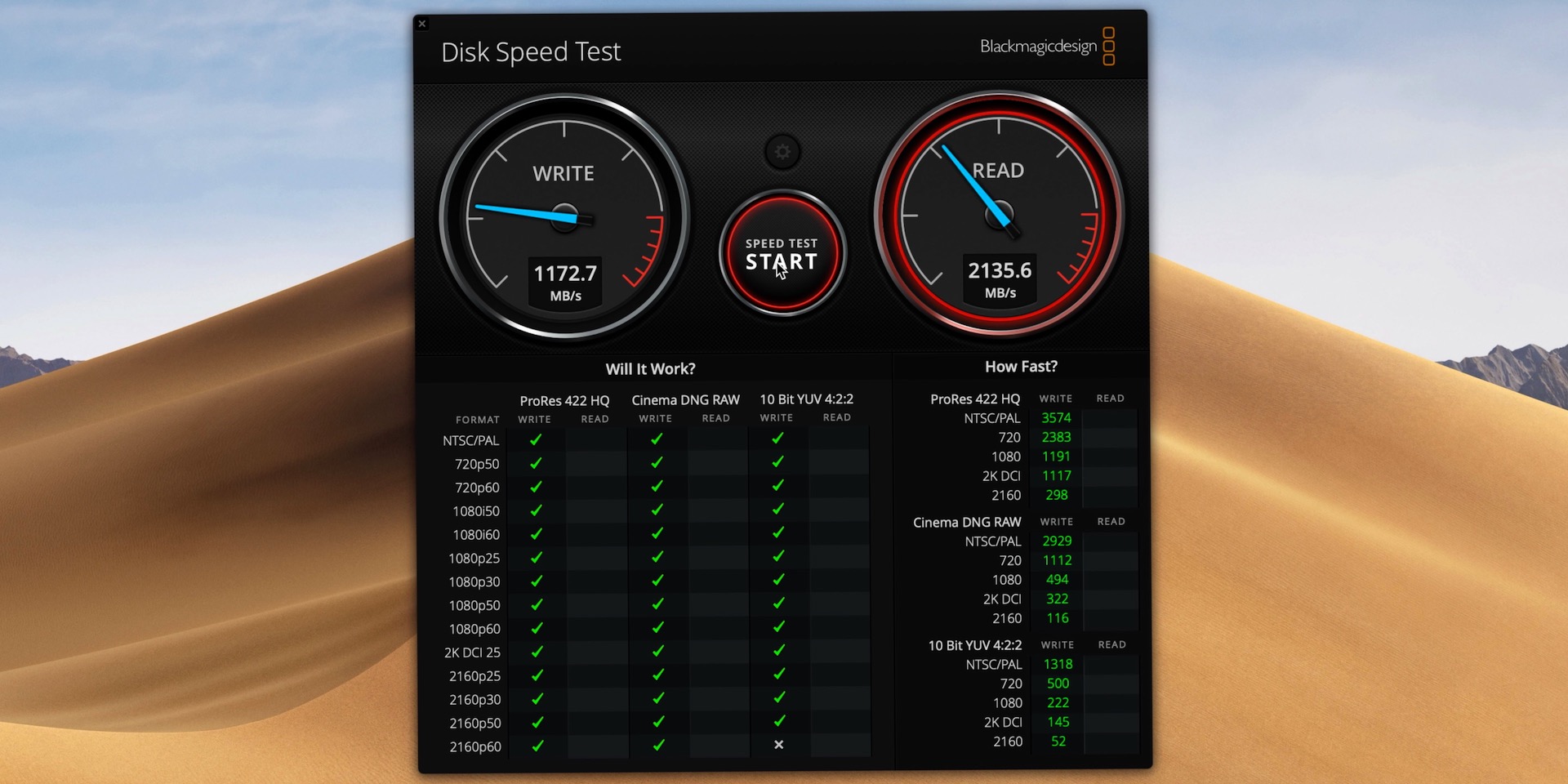 Samsung X5 speed test while connected via the display

There is one caution that I have about daisy chain Thunderbolt 3 setups with this monitor: you’ll generally want to avoid daisy chains with high-bandwidth peripherals.

Examples of such devices are external SSDs, like the Samsung X5 SSD featured in the video above, and eGPUs like the Razer Core X. You’ll encounter less-than-optimal performance when connecting to bandwidth-hungry devices like the aforementioned, so it’s best to directly connect these to your Mac if possible. 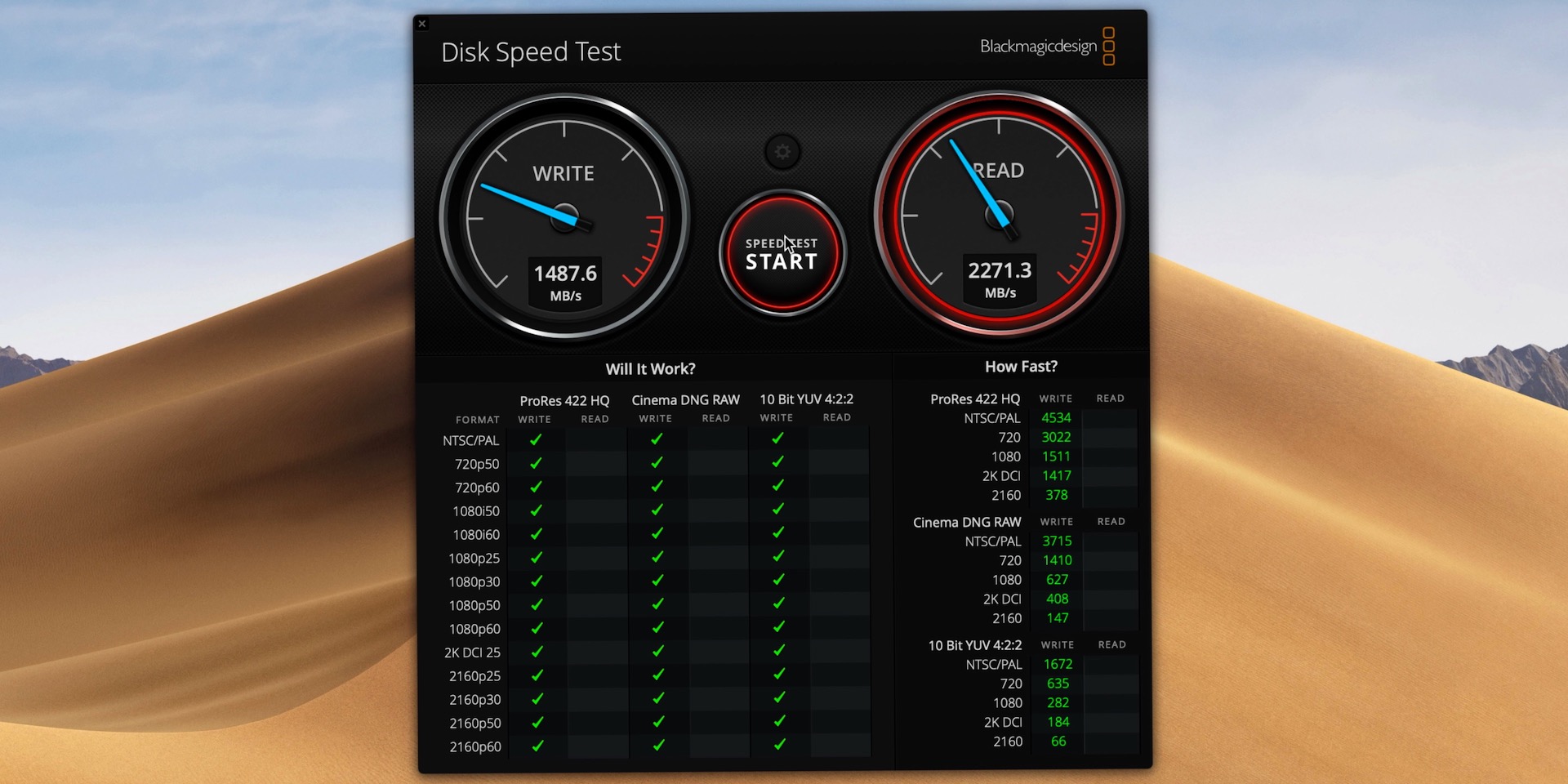 One of my favorite things about the LG UltraFine 4K Display is that it’s highly adjustable. Users can tilt the display forward -5 degrees and backwards 20 degrees. You can also use the arm to pivot the display up or down 4.3-inches. 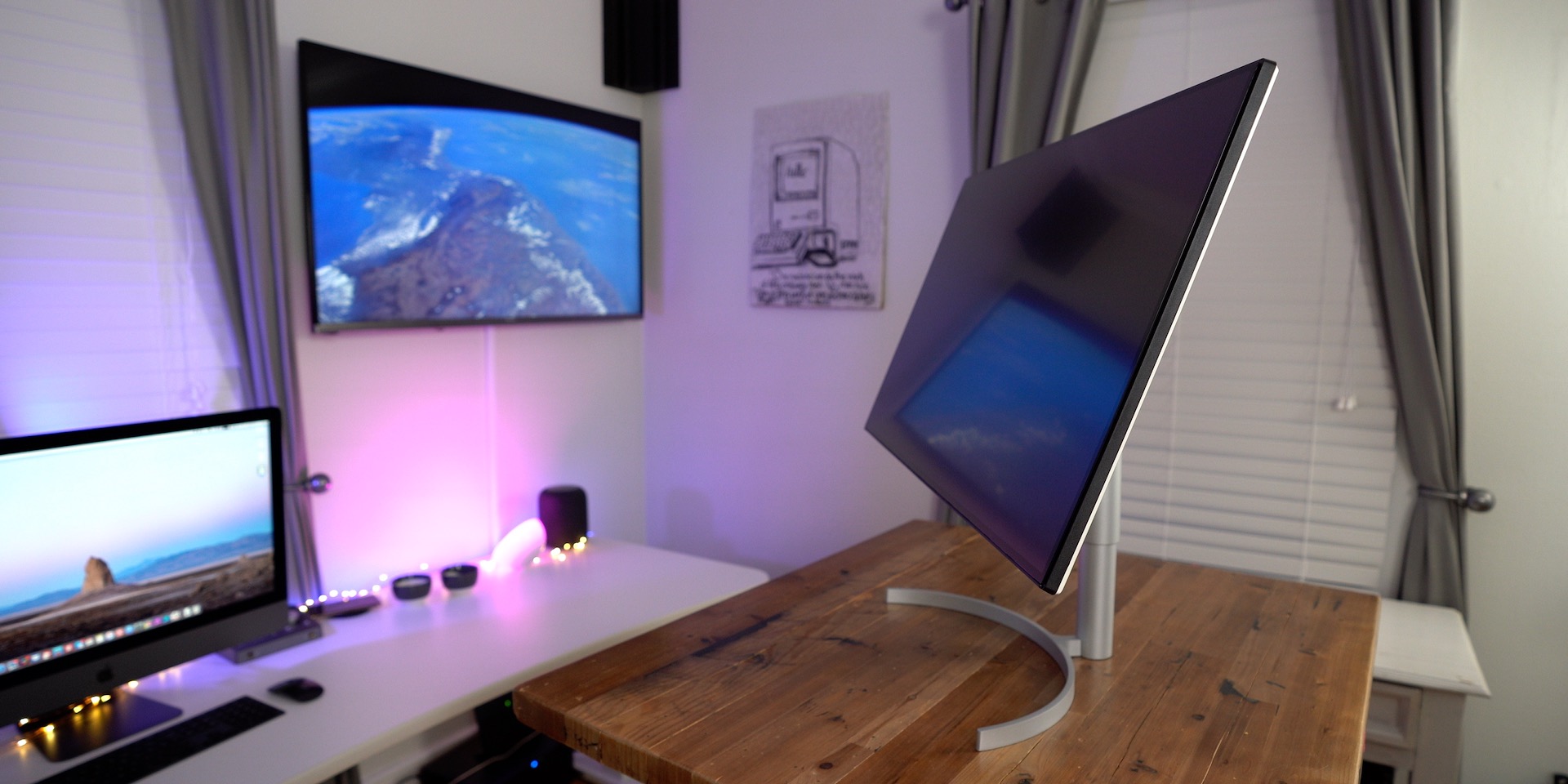 LG didn’t stop there, however, as the display allows you to rotate it 90-degrees so that you can view it in portrait mode. For certain types of applications, this orientation makes the LG UltraFine Display a handy companion to your main display. 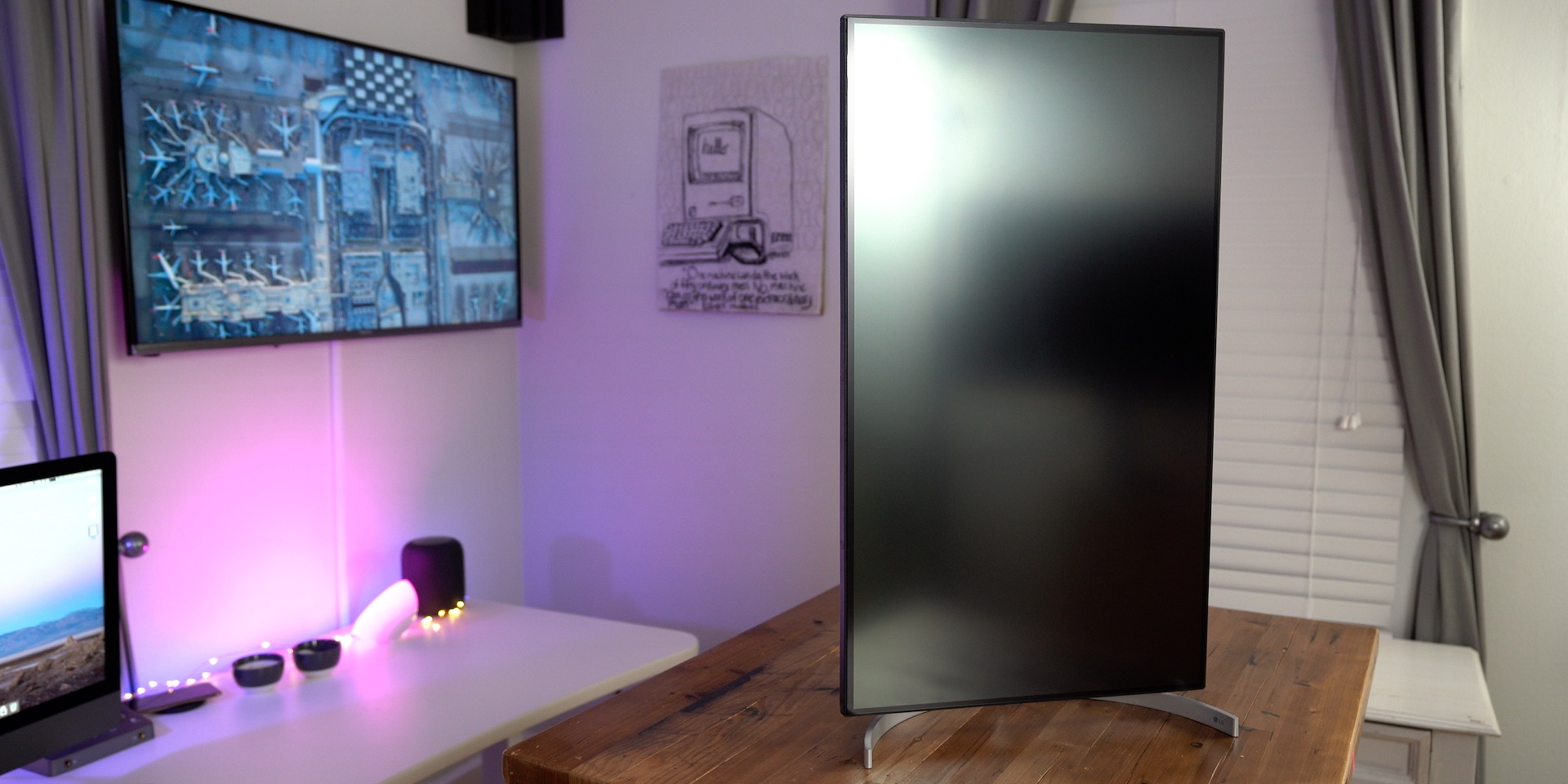 Like other LG displays, the 32UL950 comes with a joystick on the bottom of the unit between the two 5-watt speakers for controlling on-screen display settings. 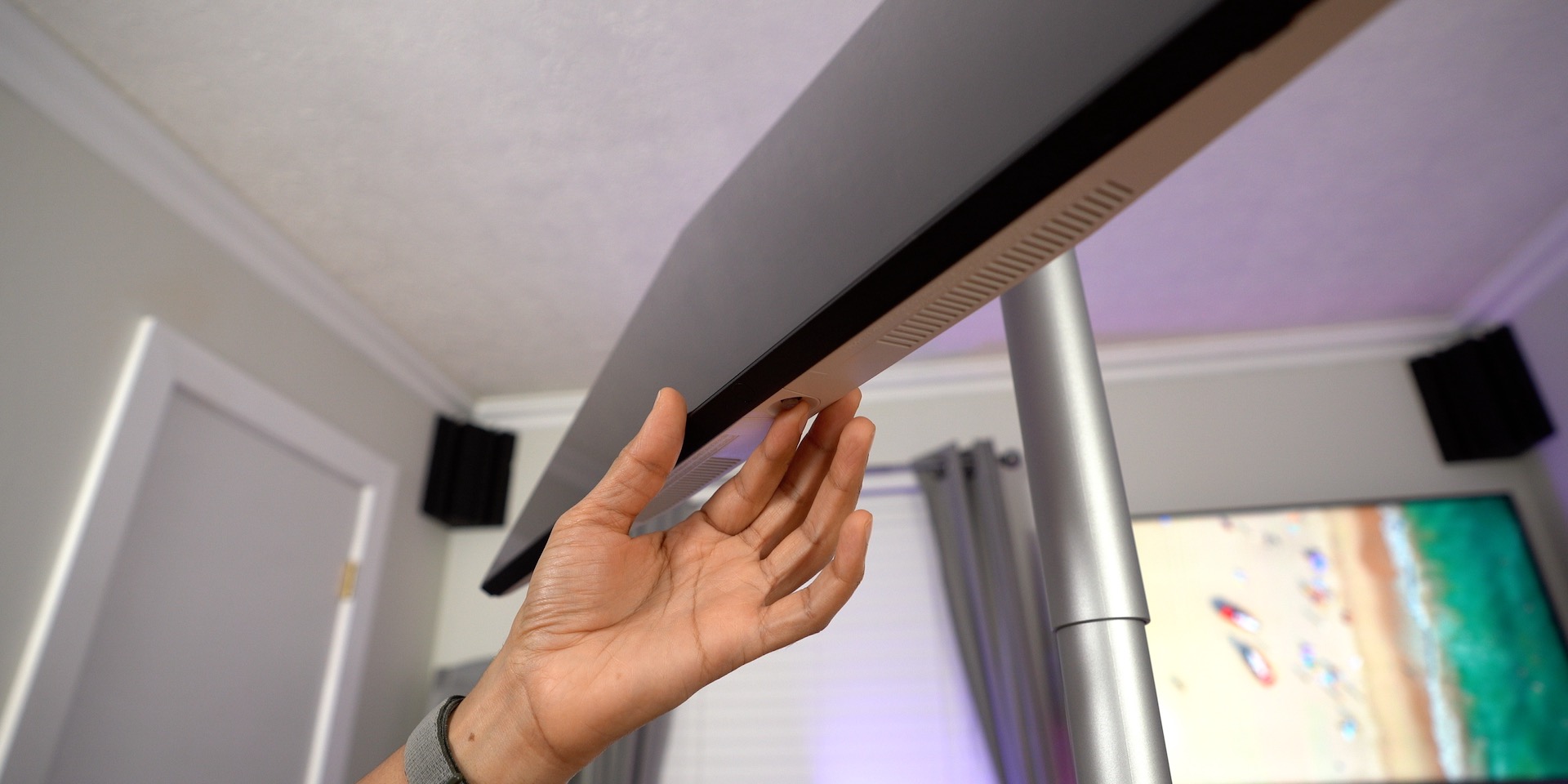 Settings for the LG UltraFine 4K are plentiful. You can quickly adjust input, change up and customize the picture mode, and access dedicated settings targeted at gamers. 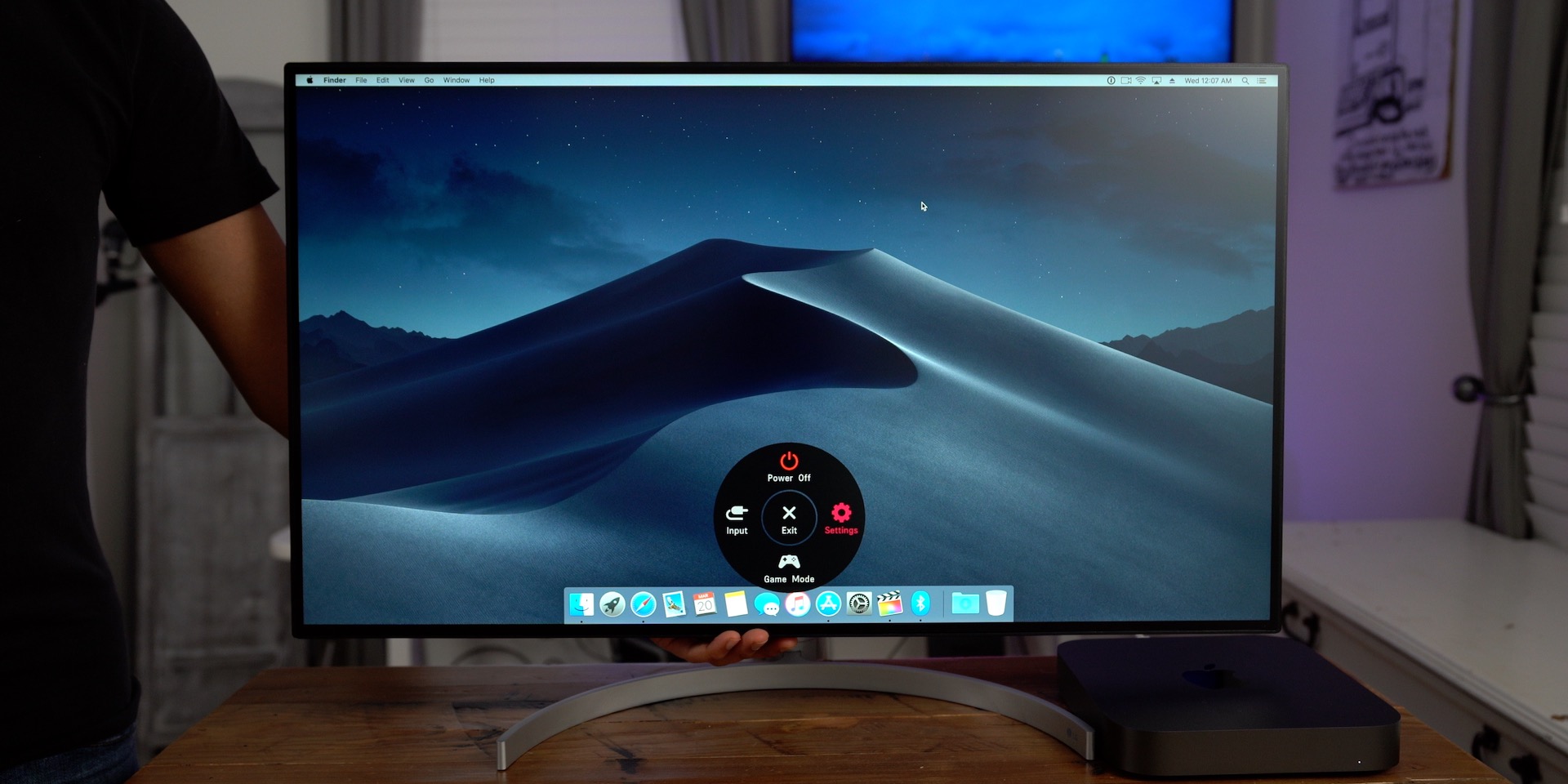 Other features include the ability to adjust local dimming, enable PBP (picture by picture) for viewing two input sources simultaneously, and more. For those that like to tinker, you’ll find lots to adjust via the intuitive joystick-driven interface. 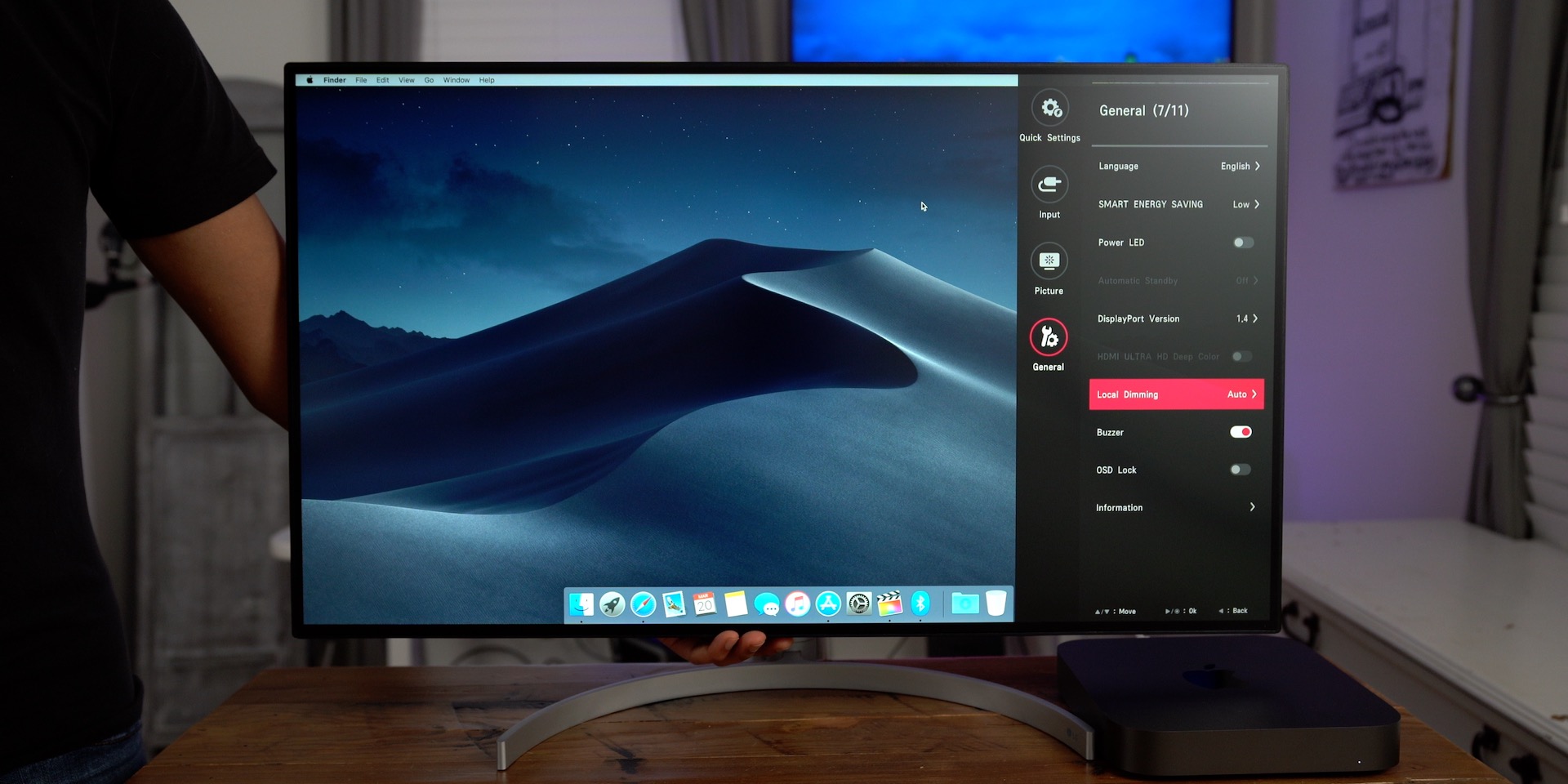 That size to pixel ratio

Despite all of the bells and whistles, I understand that some people may not like the idea of a 4K display in a 32-inch panel. That results in a PPI of 138, which falls short of qualifying as a “Retina” display on paper.

On the flip-side, I actually prefer a larger 4K panel, as it’s easier on my eyes. Assets are larger on screen while in pixel-doubled Retina mode, which makes it easier to read. Although I love the idea of 5K panels, even my 27-inch iMac gives me problems from time to time when running at its default resolution.

At the end of the day you’ll have to decide if 4K UHD in a 32-inch panel is something that’ll work for you. I know it works for me personally, but I understand why some people may scoff at the idea.

Being that it’s an IPS display, off-axis viewing angles — whether left, right, up, or down — are good. The display also does a good job of rejecting reflections, although ambient light hitting the screen will require users to crank up the brightness. 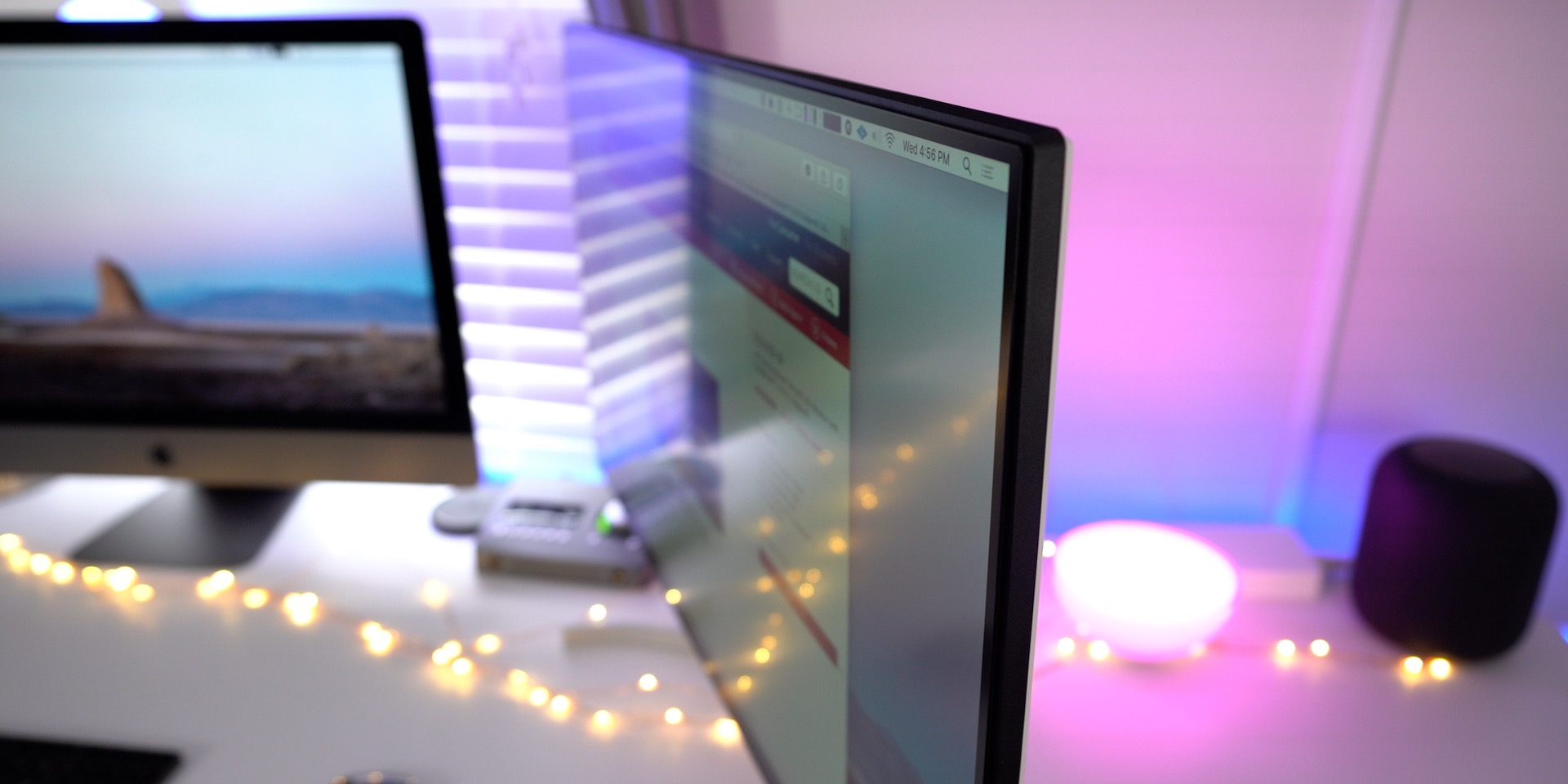 This Nano IPS display supports 98% of the DCI-P3 color gamut, so you’re able to see a wider range of colors that you wouldn’t be able to discern on a lesser display. Nano IPS is a technology that applies nanometer-sized particles to the LED to absorb excess wavelengths of light in order to improve color.

The panel sports black levels that seemed good as I watched a movie throughout the day, but nighttime performance painted a slightly different picture. Backlight bleed at the edges of the panel is very apparent in a dark room as you observe the display’s limited local dimming abilities go to work. 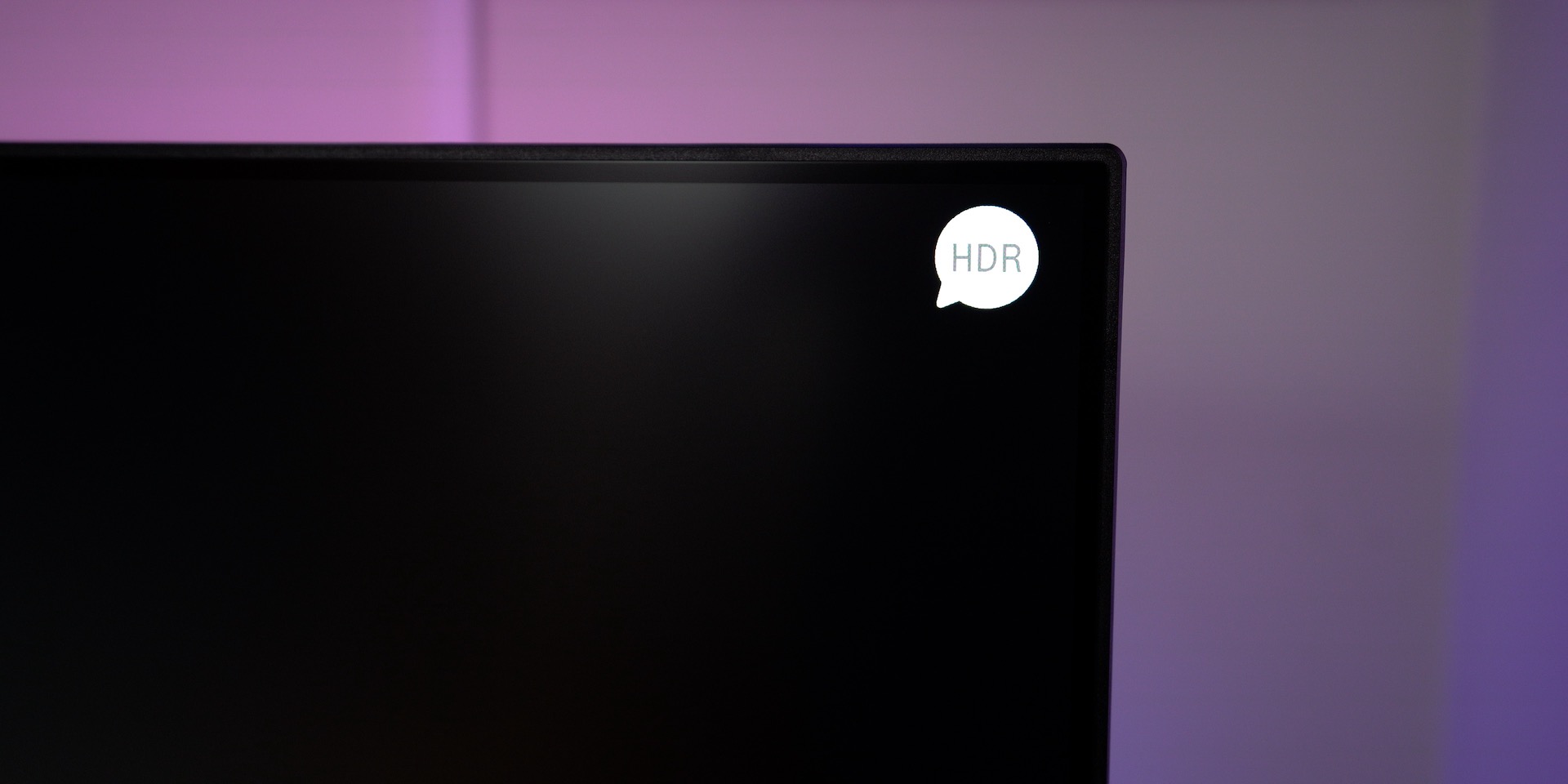 Although it comes with a VESA-certified DisplayHDR 600 rating, the HDR performance doesn’t come close to the type of contrast and intense brightness you’ll see in LG’s premium OLED televisions. The UltraFine recognized HDR content playing back via my Chromecast Ultra, and it looked okay, but it’s no comparison to higher-end HDR examples. 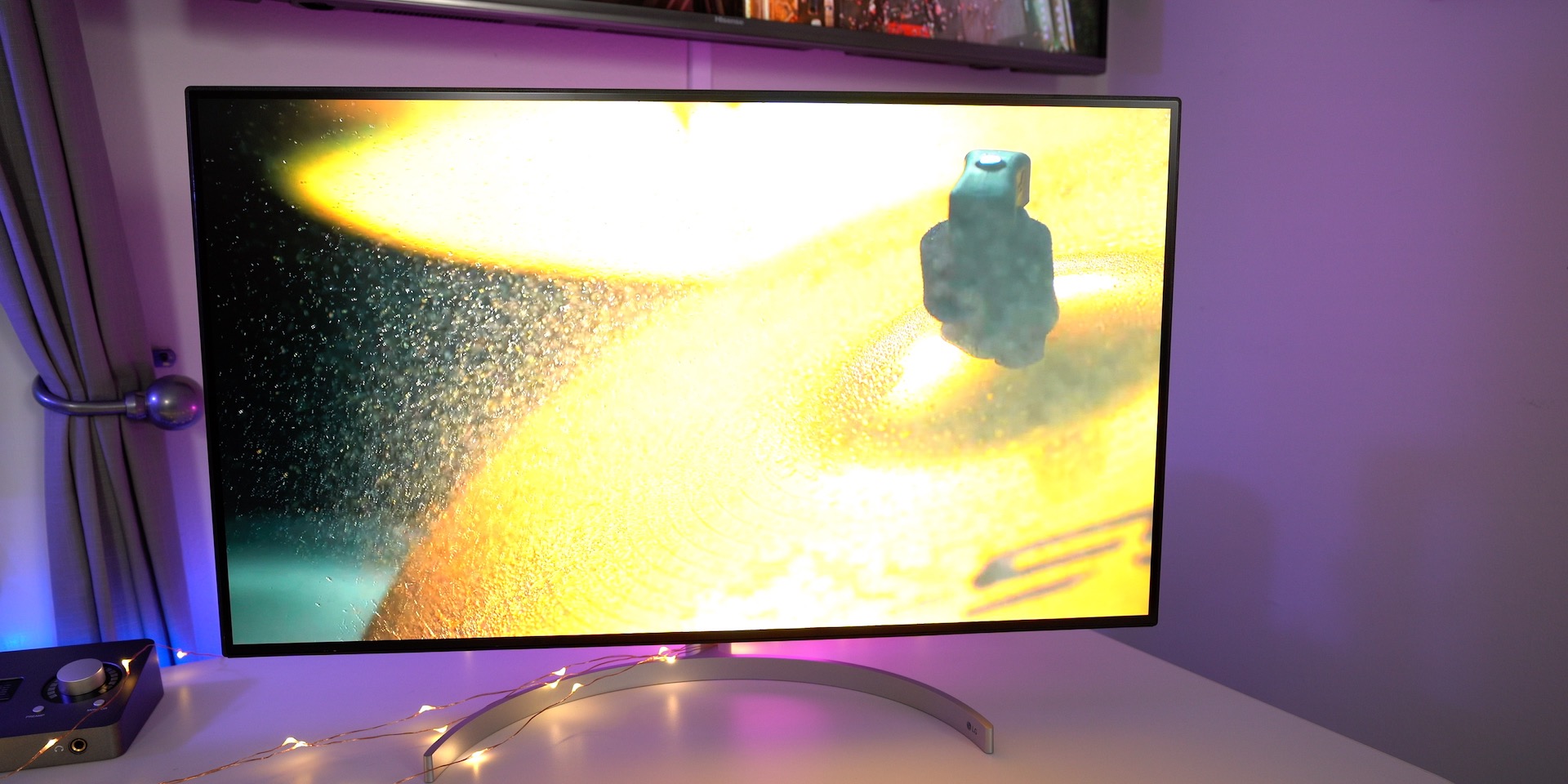 The 32-inch LG UltraFine 4K Display is a solid choice for those looking for a large 4K display. Personally speaking, I enjoy its size to pixel ratio, but some people will understandably balk at a display this big with a native 4K resolution. 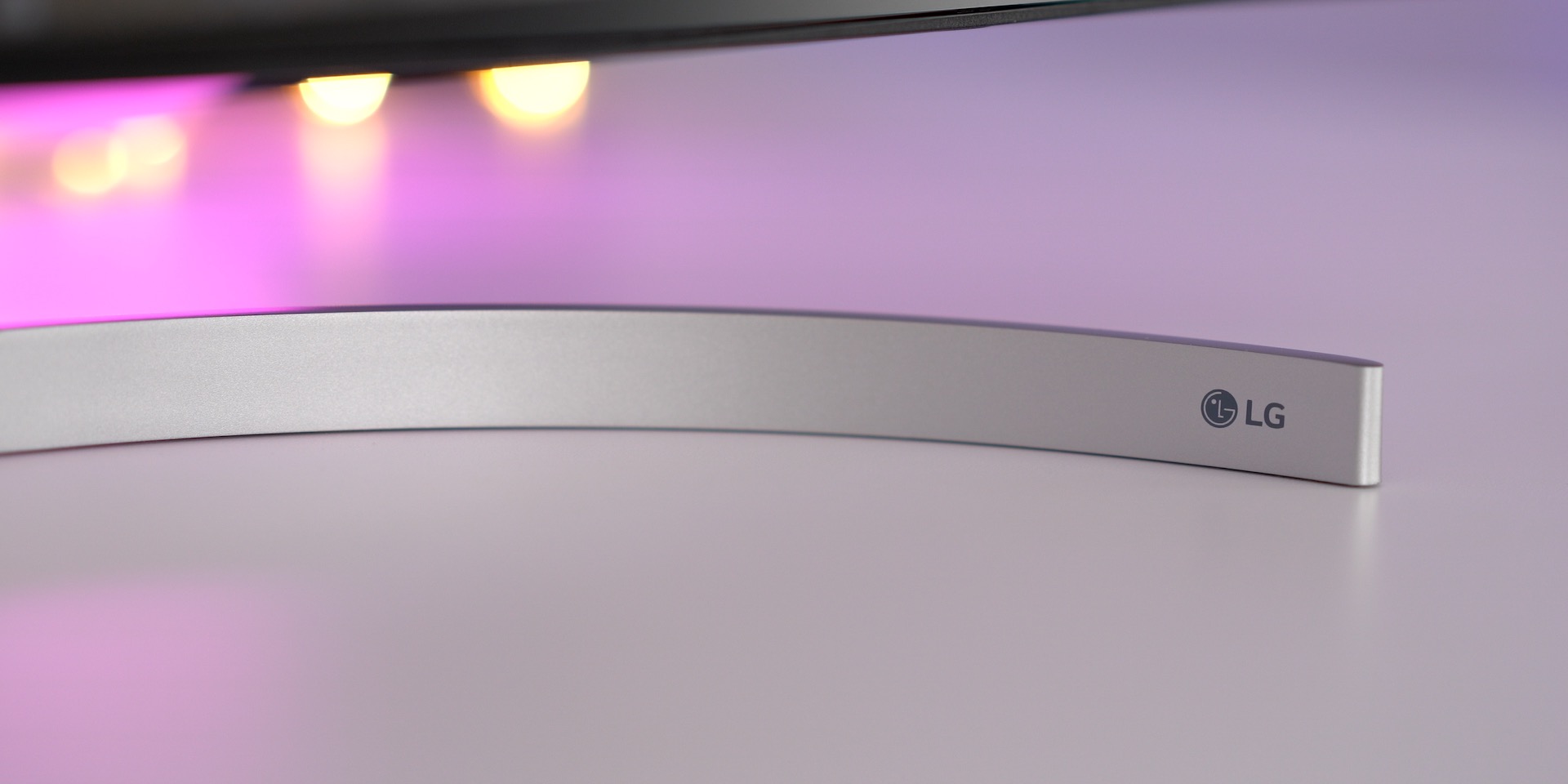 Another downside to the display is that it only delivers 60W of power to connected laptops. That’s great for a machines like the MacBook Air or 13-inch MacBook Pro, but it will leave 15-inch MacBook Pro users wanting more.

Outside of the screen size, the biggest advantage of this display is the amount of I/O present on the rear panel. With dual Thunderbolt 3 ports and a host of other I/O, there’s plenty here to satisfy most use cases. 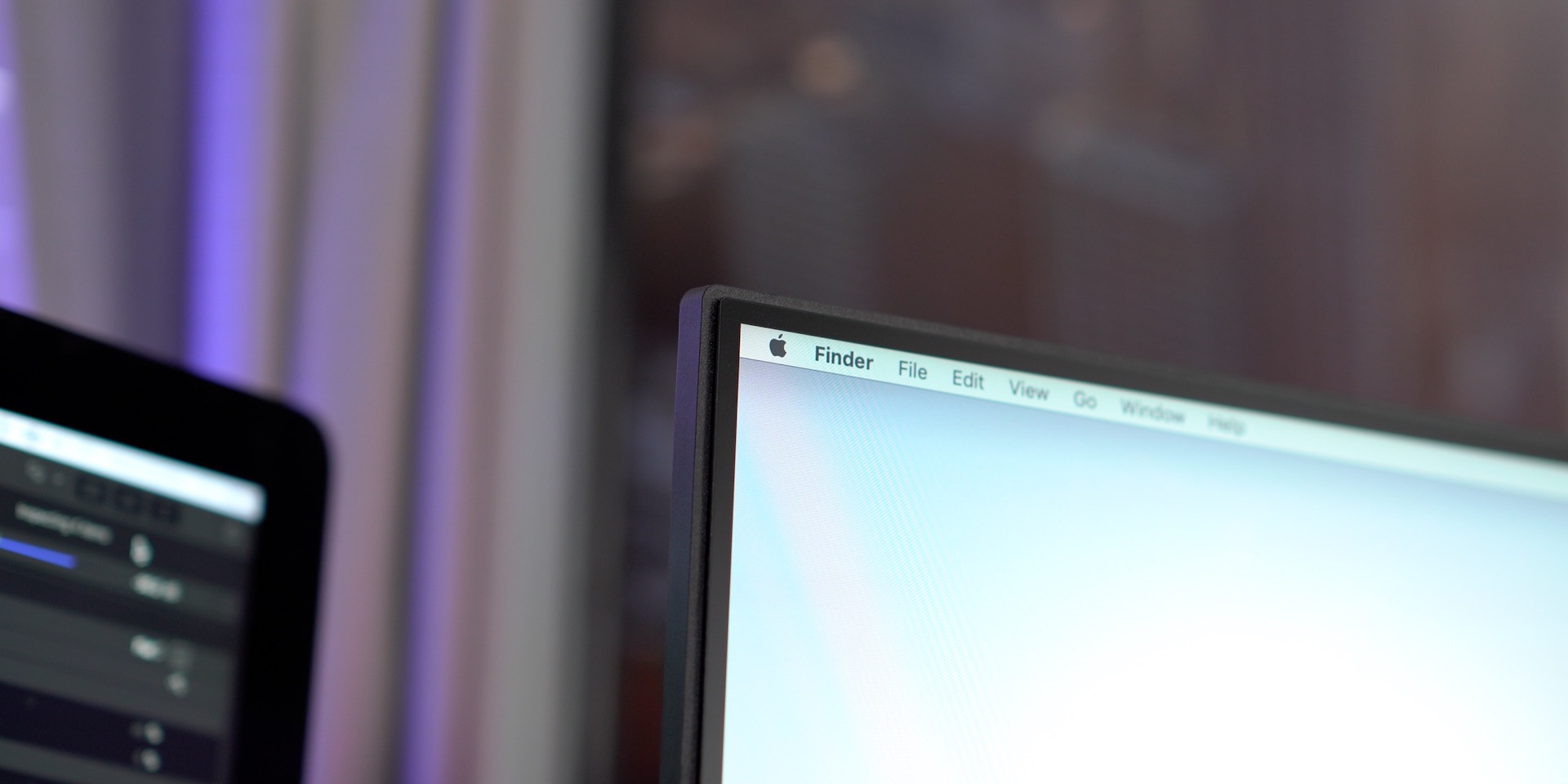 In fact, the LG UltraFine Display also works with devices that feature USB-C ports, but don’t support Thunderbolt 3. For instance, I was able to connect my 11-inch iPad Pro via a USB-C cable to mirror my iPad’s display to the external monitor. This means that the LG display will also work with the 12-inch MacBook, which lacks Thunderbolt 3 but features a single USB-C port.

Design-wise, I prefer this LG UltraFine Display to the design of the model with the same name currently sold in Apple Stores. The bezels are slimmer, there’s way more I/O, the screen is less reflective, and the stand is more attractive. 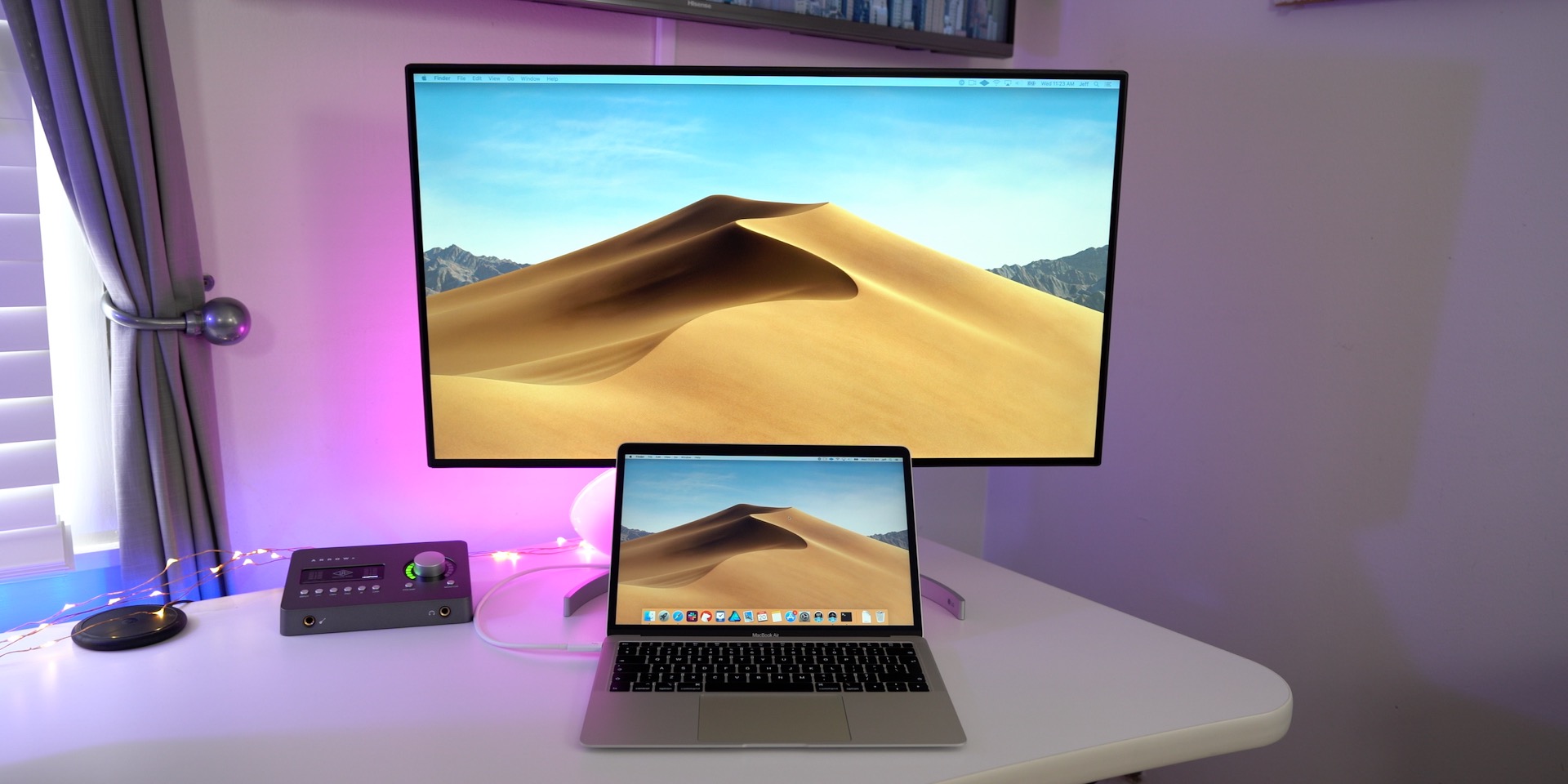 The biggest barrier to entry to the LG UltraFine 4K Display with Thunderbolt 3 is its price. It retails for $1299 on LG’s website (though can sometimes be found cheaper on Amazon), which might be a hard pill to swallow given that Apple’s own premium 6K display is in the works and will likely launch later this year.

What do you think? Sound off in the comments with your thoughts.