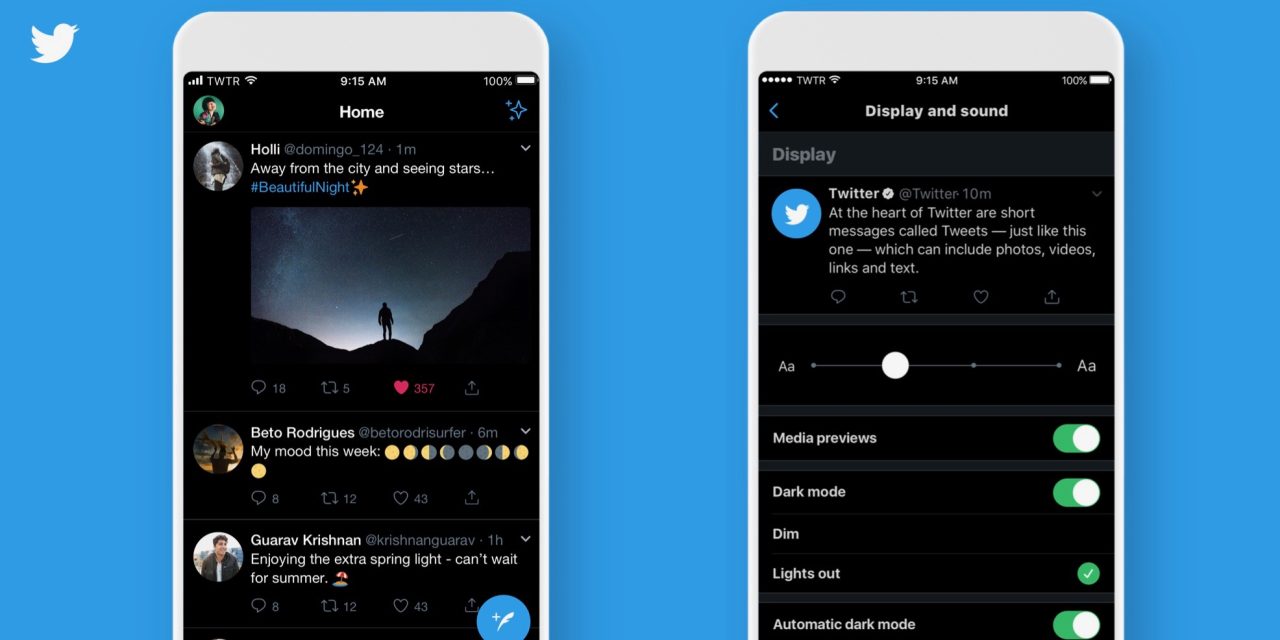 Twitter has announced today that it is expanding its dark mode options for iOS users. Adding to the blue/gray dark mode theme that the platform has offered for a while, Twitter is now gaining a “Lights Out” option as well as an automatic dark mode.

Update: Some users are reporting the new features are showing up after closing the Twitter app and reopening it.

“Giving more people options to personalize their experience on Twitter based on what makes them most comfortable is what the latest update to Dark Mode is all about,” said Bryan Haggerty, Senior Design Manager at Twitter.

Back in January, Twitter CEO Jack Dorsey responded to a user asking for a true black dark mode, as he criticized the blue/gray dark theme. Dorsey said the platform would “fix” the issue. The comment quickly created a lot of speculation and concern from Twitter users what that meant exactly.

Today’s iOS update alleviates those fears as Twitter is gaining an option to use the blue/gray theme or a true black dark mode and also a new automatic dark mode. Twitter previously called its dark theme “Night mode” which will now be named “Dark mode.” New icons are also arriving with today’s changes.

Dim: Dim is the current Dark Mode theme that we introduced in 2016 – a blue/grey color that still gives people a more comfortable way to enjoy Twitter for any environment you’re in and helps reduce eye strain in low lit environments.

Lights Out: Our new theme for Dark Mode, which is a pure black color palette that emits no light since the pixels are turned off. This is a great option for those who want an even darker theme for low lit environments that reduces eye strain, and can potentially help with saving battery.

Automatic Dark Mode: Now, Twitter for iOS devices can enable automatic dark mode to switch from light to the dark mode theme of their choice according to their timezone. This feature takes the burden off of people to make the adjustments. If you’re using Twitter all day long, it’s better on the eyes to have a tool that adjusts for the varying environments, contexts, and atmospheres you’ll experience throughout the day.

Dim on left, Lights Out on right

Twitter’s Product Manager, David Kaufman, notes that the changes were made with the help of user and partner feedback, and the company looks to continue to do the same with future updates.

“Dark Mode enables us to expand our accessibility offerings so everyone is able to use Twitter in a way that works best for them and their environmental conditions. We’ll continue to incorporate feedback from our community, internal and external partners as we iterate on the product,” said David Kaufman, Product Manager at Twitter.

These updates are starting to roll out now, with the changes coming to Android and the web in the future. Twitter is a free download from the App Store.