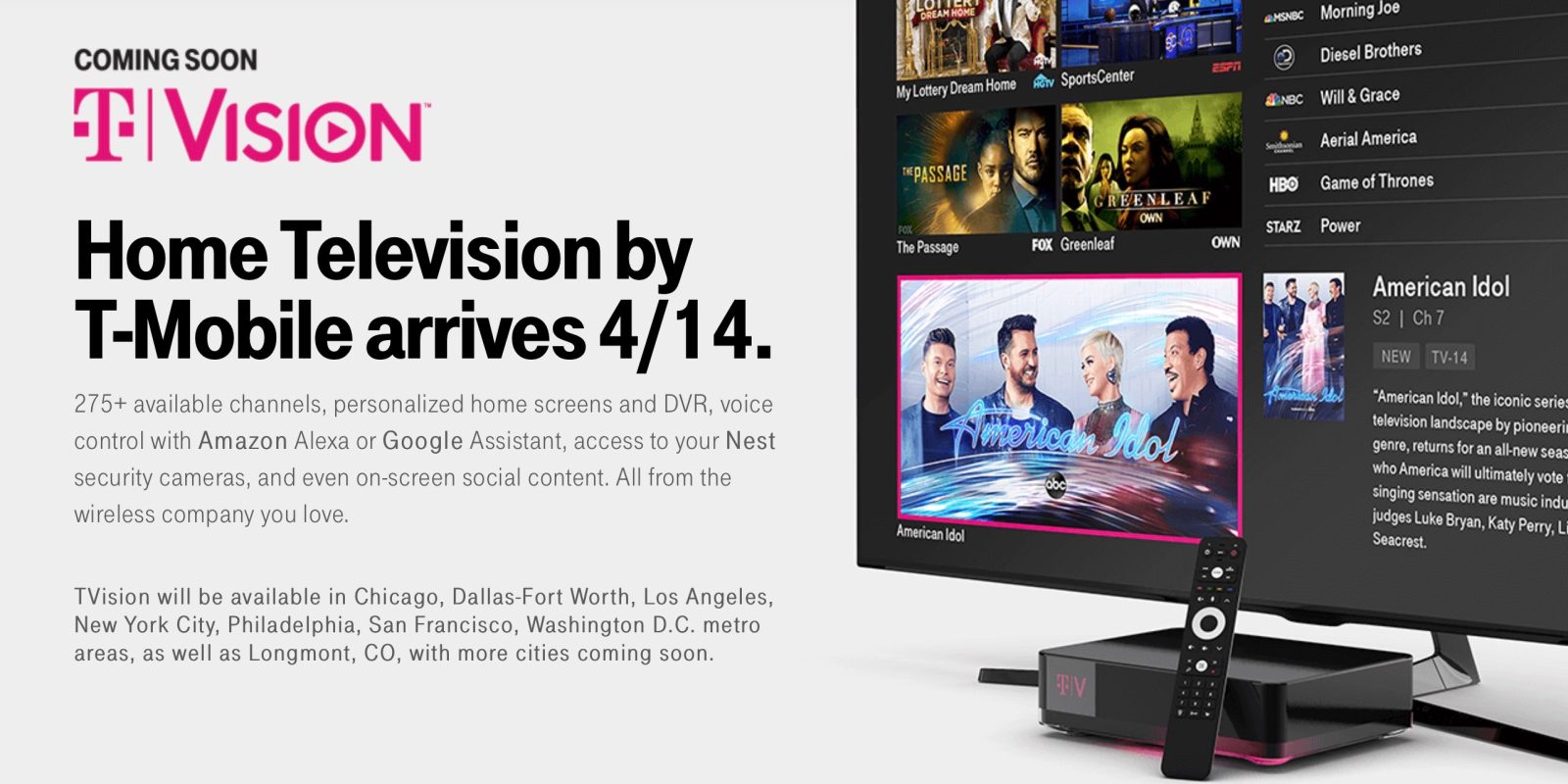 T-Mobile has today announced its TV plans with the arrival of TVision Home. The new service is the carrier’s attempt to take on traditional cable providers and will be launching in eight cities next week. T-Mobile is touting TVision Home as “BS-free” with “no hidden fees, no bill creep or exploding offers, no annual service contracts and no crappy customer service.” However, the service comes with a high price that may not be too different from average cable bills.

T-Mobile announced TVision Home is built upon Layer3 TV which it acquired back at the end of 2017. The service will first launch in eight cities on April 14 with more cities coming “later this year.”

TVision Home is launching in Chicago, Dallas-Fort Worth, Los Angeles, New York City, Philadelphia, San Francisco, and Washington DC metro areas, as well as Longmont CO, with other markets coming later this year. The Un-carrier is also launching Satellite Freedom and will pay off early contract termination fees for Dish and DirecTV customers, up to $500 via prepaid card, when they switch to TVision Home. T-Mobile also announced that Netflix and other streaming apps will be available on TVision Home, and the Un-carrier shared plans for TVision to run on popular third-party TV platforms in the future.

Here are the highlights of the new TV option:

As for its BS-free claim, here’s what T-Mobile says it will do different than the big cable companies:

BS-Free TV Because TVision Home is from T-Mobile, there are no hidden fees, no bill creep or exploding offers, no annual service contracts and no crappy customer service. BS-Free TV means:

Even though pricing may be consistent, it seems like it could add up quickly. With a $90/month base price, $10/month per TV, and add-ons like HBO, TVision Home pricing could easily come in above the average $107 cable bill that T-Mobile notes. Also with this pricing, T-Mobile won’t be competing with other streaming services like Hulu’s Live TV, YouTube TV, and DirecTV Now.

In addition to the initial eight city city rollout next week, TVision Home will be on display at T-Mobile stores. Check out the promo video below for a closer look.