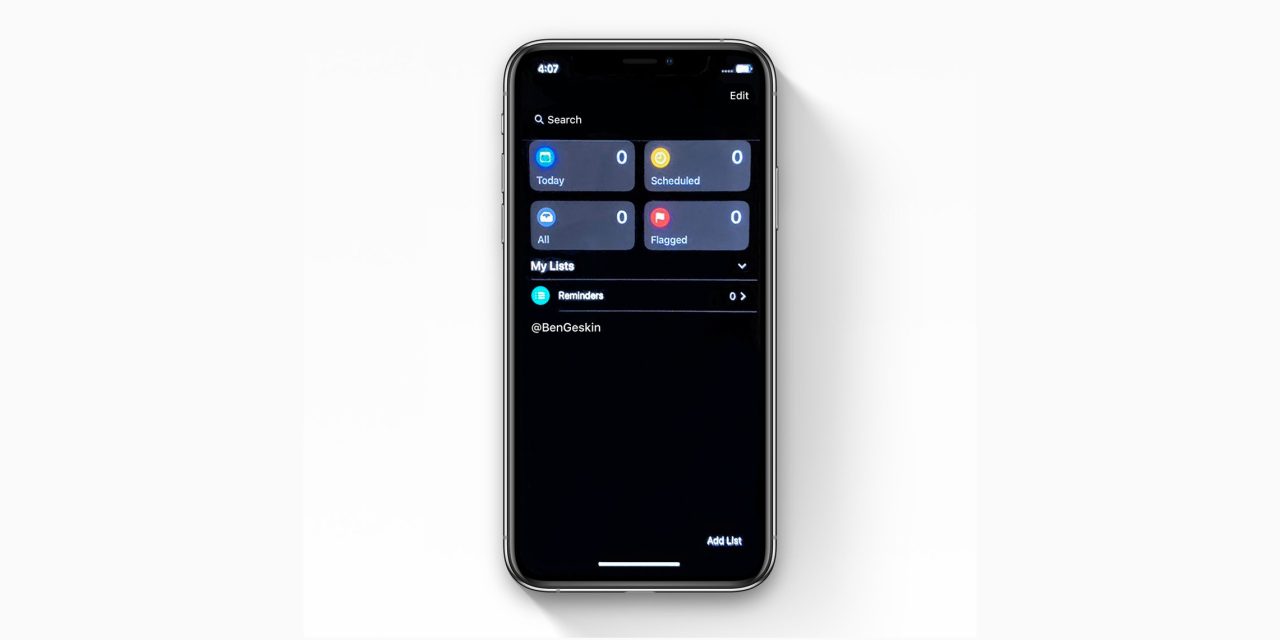 Benjamin Geskin has tweeted a leaked screenshot of the iOS 13 Reminders app running on an iPhone in the new Dark Mode theme.

9to5Mac has privately seen similar images and can corroborate the design. Obviously, it closesly matches the screenshot that 9to5Mac previously published, which depicted the iPad Reminders app.

What’s cool about Geskin’s image is it shows how the same iPad app will appear on a phone-sized screen, collapsing the side-by-side panes into a full-screen interface. It also shows off the new dark theme coming in iOS 13.

The Reminders interface sits on what appears to be a true black background. The new buttons for ‘Today’, ‘Scheduled’, ‘All’ and ‘Flagged’ are drawn as dark grey tiles with the colorful iconography popping off the page.

Geskin says that his screenshot (or really what is a photograph of a screenshot, you can see the glare if you zoom in closely) comes from an early March build of iOS 13 so it’s possible that some changes have taken place since that time (like removing the stray separator line below the search box and above the first row of tiles).

Yesterday, Geskin also shared an image of the new volume indicator UI present in the same March build. It is our understanding that the volume UI does not look like that anymore, but the Reminders interface pictured here is more representative of what Apple will actually unveil later today.

The WWDC keynote kicks off at 10 AM Pacific Time where Apple will announce iOS 13, macOS 10.15, watchOS 6 and tvOS 13. Of course, 9to5Mac will be bringing live coverage of all the announcements — so stay tuned.