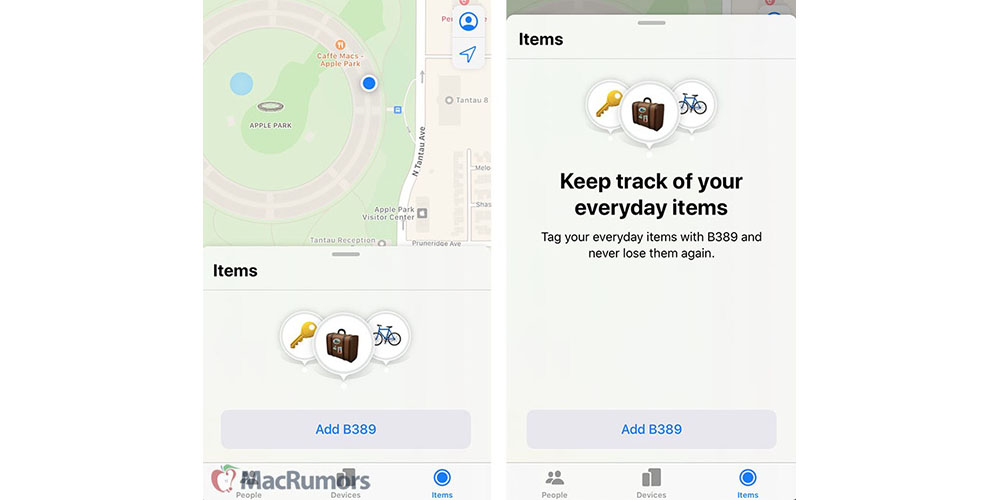 We exclusively revealed back in April that Apple was working on the Find My app, now released as part of iOS 13 – including the fact that it will later include the ability to locate Tile-like locator tags being commonly referred to as Apple Tags.

Since then, we’ve learned quite a bit more about it, including the fact that an Items tab will be added to the existing People, Devices and Me ones …

We’ve previously seen all of the graphic elements from the new feature, but MacRumors today has screenshots which give a good sense of at least one version of the user-interface.

Similar to the existing “People” and “Devices” tabs in the Find My app, the “Items” tab will display a map at the top and a list of items associated with a user’s Apple ID account at the bottom. The existing “Me” tab in the Find My app will be relocated to an avatar hovering over the map in all tabs.

One thing not revealed is the name of the tags: they are referred to in these screenshots only by the codename B389.

iOS 13 also introduces a greatly-enhanced way to find devices, even if they have no Wi-Fi or mobile data connection.

The U1 chip in the new iPhone 11 models should also allow for much more precise location-finding – with the possibility of additional functionality being added later.

In normal mode, the app simply shows the location of your devices. You can also set a safe zone, and be automatically notified if a device leaves that area. If you lose something, you’ll be able to put the tag into lost mode.

When a tag is in lost mode and the system detects it being carried by another person who owns an Apple product, their device will alert the person about the item, optionally showing a message from the owner and directing the person to contact them. This is using the new offline tracking feature Apple introduced at this year’s WWDC, which uses nearby Apple devices to privately send location data about a user’s devices to the cloud.

The tags themselves are expected to be much more sophisticated than existing Tile-type devices – though likely with a price-tag reflecting this fact.

These tags will pack a lot of technology in a very small package consisting of a white circular tag with an Apple logo. They include Bluetooth LE, NFC, a speaker to help with being located, and run a trimmed-down version of iOS. Pairing with a user’s iCloud account will be done by proximity, just like AirPods. NFC can be used when a tag is located so that a user can scan the tag by tapping it with their phone to get information and help contact the owner.

It had been expected that Apple would announce the tags at the iPhone keynote, and the omission has all the signs of having been rather a late decision.