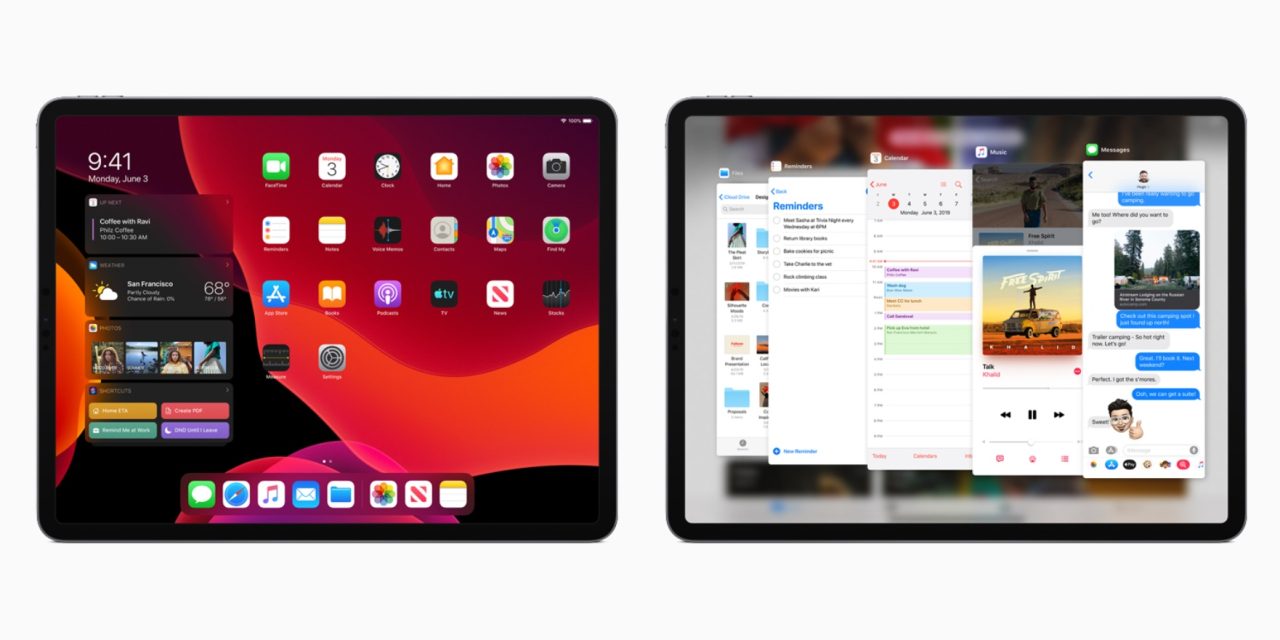 iPadOS includes all of the same features as iOS 13 like Dark Mode, the redesigned Photos experience, Messages profiles, and a new Reminders app. iPadOS also boasts some tablet-exclusive changes like updates to the Home screen, new multitasking capabilities, and much more…

As always, as long as you have a compatible iPad, you can update to iPadOS 13.1 for free. Just head to Settings and start the Software Update now.

It’s worth addressing the branding. iPadOS is a renaming of iOS to better signal Apple’s interest in the tablet experience. However, the core experience is largely the same. It is more branding change than functional differentiation, at least for this year. We could see more drastic shifts in iPad and iPhone user experience in the coming years.

Also, this is iPadOS 13.1. Due to quirks of Apple’s software update schedule this year, iPadOS 13.0 was never released to the public.

As you can imagine, iPadOS 13.1 includes all the same features as what you can find in iOS 13.1 for iPhone. This means Dark Mode is now available on the iPad, so you can choose to have that black-and-grey UI appearance. Just like on the iPhone, you can change appearance at any time in Settings, or using the new Control Center toggles.

Photos gets a new look with curated Years/Months/Days tabs, in addition to new photo and video editing tools. There’s also a brand new Reminders app, with a refreshed design and new features like subtasks and Siri integration. Siri Shortcuts gets more capable, there’s the new Memoji Stickers app, a new share sheet and volume HUD, and much more. Check out our iOS 13 coverage for a deeper look into what the baseline of iPadOS 13 brings.

iOS 13, with some iPad-focused extras 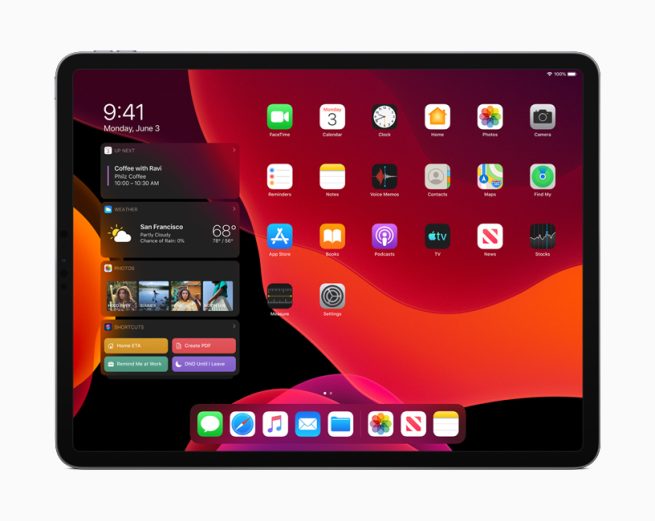 In the new mode, the grid of apps is 6 x 5 — and the arrangement stays the same whether you are in portrait or landscape. On the first home screen, you can even have a persistent sidebar of widgets. You can pick a few widgets to remain visible at all times, and everything else is available with a swipe. This means you can see things like calendar appointments and current weather right there on the home screen.

To pack in everything, each app icon is slightly smaller and there is less space between each icon. It’s a better use of space, especially on the larger iPad Pro models. You can switch between the standard and big app icon modes in Settings. 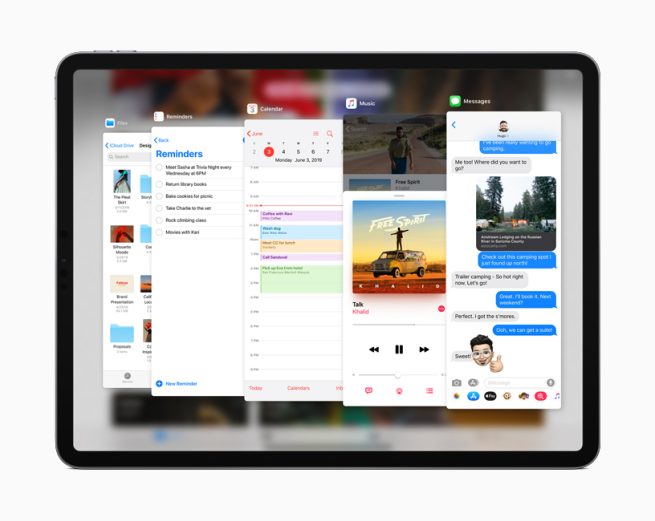 iPadOS expands the capabilities of the iPad multitasking system substantially. The Slide Over apps and the full-screen apps now have separate multitasking trays. You can switch between Slide Over apps using a new home indicator, with the same familiar swipes as you have come to learn from the iPhone X series of phones.

iPadOS also lets you have multiple windows for a single app. You can open two separate Messages conversations as separate windows. You can show the two windows side-by-side or even mix and match with other apps. An app window can be wholly distinct from another app window in Slide Over. Tap and hold on any app and select Show All Windows to focus in on all the open windows from a single app.

The new multitasking and split-screen options give iPad users a lot more power to be productive, but they also add complexity to an already confusing system. It’s something that has to be learned for sure. 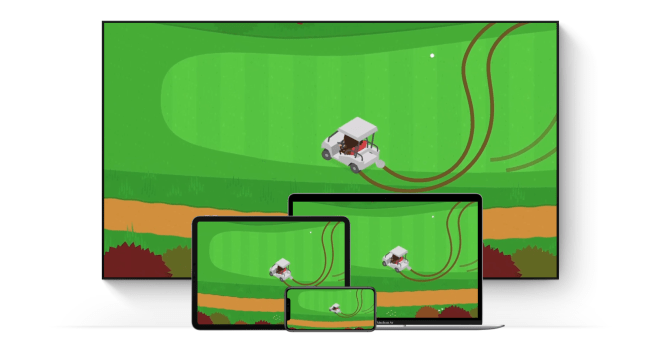 The entire Apple Arcade library is available on iPhone and iPad (with most games also coming to Apple TV and the Mac). Some Arcade games are clearly designed for the phone first, but there are many titles that benefit from a bigger tablet-sized canvas. iPadOS 13 lets you connect PlayStation and Xbox controllers to the iPad for the first time, which you can use to play a plethora of Arcade games. 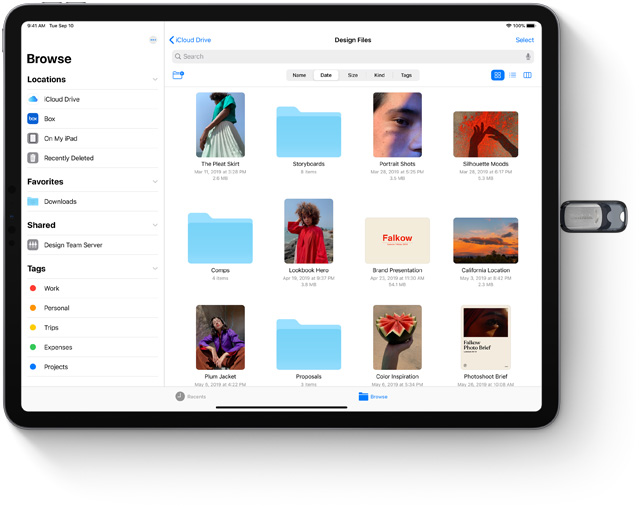 iPadOS features new text editing gestures, which are meant to make it easier to edit text and undo mistakes. Rather than shaking your iPad to undo, you can now swipe to the left with three fingers. Pick up the blinking text cursor and drag it to wherever you want. Pinch with three fingers to copy and pinch out at a new location to paste. The new gesture system should help speed up common text operations.

iPadOS also supports USB accessories. You can plug in a USB hard drive or memory stick, either directly into the 2018 iPad Pro’s USB-C port or using dongles for older models, and access all the files and folders using the new Files app. 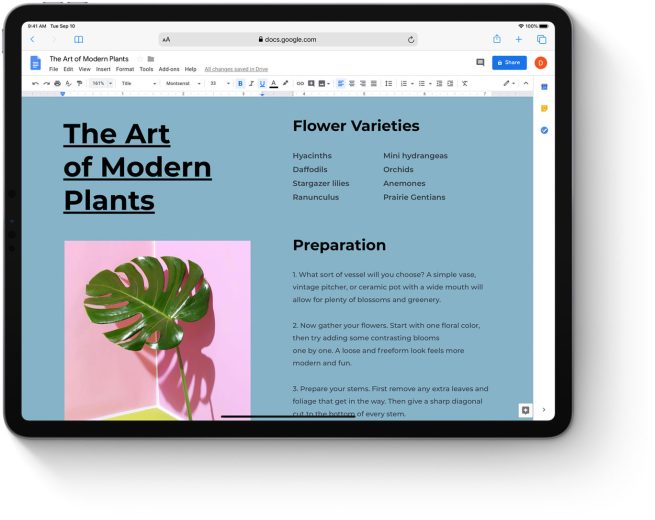 Apple has overhauled Safari to make browsing websites on the iPad mirror the desktop Safari experience. Whereas before websites would often serve iPhone-optimized pages, the iPad now fetches and renders websites like a Mac. Small text and buttons are automatically scaled up to be accessible for touch input.

There’s also a new download manager, so you can download files into the Files app and track their progress using a new Downloads button in the toolbar. Apple has also carefully optimized Safari on iPad, so users can now actually interact with web-apps like Google Docs or WordPress.

There are even more changes than what we’ve listed here, but it all adds up to making the iPad much more capable. Whilst some features would benefit from refinement — the new multitasking mental model can often get confusing to wrangle in your head — the functionality introduced in iPadOS help make the iPad a laptop replacement for even more people. From better file management to desktop-class browsing, the iPad computing experience takes a big leap forward this year.

To update to iPadOS, head to Settings -> General -> Software Update. iPadOS is compatible with the following iPad models: