Spotify launches Your Daily Podcast playlist, with mix of old and new shows 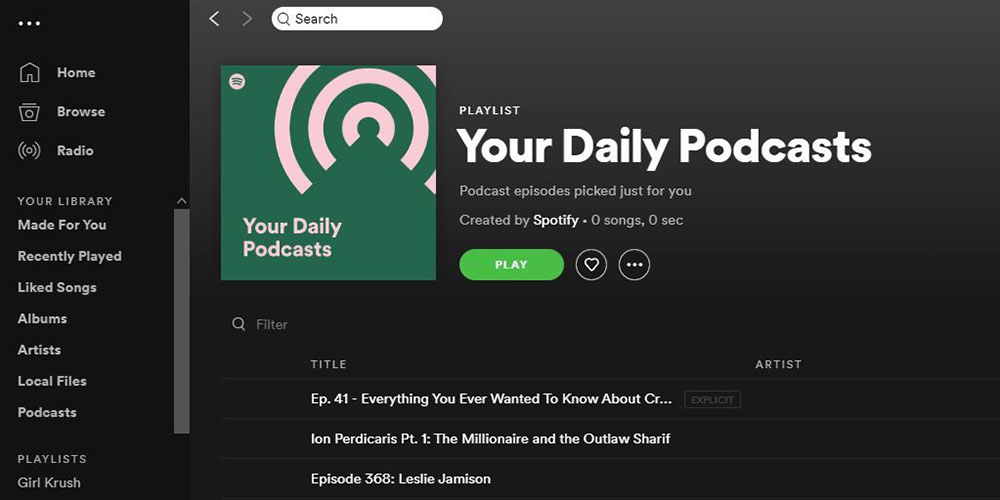 Spotify has launched Your Daily Podcast, a playlist of shows it thinks you’ll enjoy. These include surfacing shows you already follow, as well as others algorithmically recommended on the basis of your listening history.

The company says the feature has been positively received in testing, and it is now rolling out to nine countries…

The initial countries are the US, UK, Germany, Sweden, Mexico, Brazil, Canada, Australia, and New Zealand.

The Verge’s Ashley Carman has been testing it for a month.

The playlist will feature trailers, long podcast episodes, and smaller news bites, says Emily Rawitsch, director of product design, and the team isn’t committing to any set format or specific ratio of long episodes to short or new shows to favorites.

Rawitsch also says there’s no ‘preferential’ treatment for certain shows over others or Spotify shows versus other networks. Listeners might be shown an episode in a series they already listen to; a show about a similar topic to something they already like; a popular show in a genre they like; or a show with a host they already enjoy.

Carman does wonder whether podcast recommendations have the same value as music ones.

Generally, this playlist represents what many have expected ever since Spotify got into podcasting: a better recommendation system. What’s less clear is whether people need or want a podcast recommendation playlist, especially if it spans hours. Even for long commutes, an hours-long playlist that refreshes every day might qualify as content overload. Podcast discovery has been an arduous process, however, with shows mostly relying on cross-promotion and platform curators to get their show in front of listeners, so this playlist could at least be the beginning of a better discovery process.

Spotify made a big move into podcasting in February, when it acquired Gimlet and Anchor. Gimlet makes some of the most popular podcasts, including Reply All, The Pitch, and Homecoming — the latter later turning into a TV show starring Julia Roberts — while Anchor described itself a one-stop app for podcasters.

That move seems to have paid off, with a recent report suggesting that Spotify has overtaken Apple in podcast audience in a number of markets. This played a key role in the company’s surprise return to profit last month. Your Daily Podcast is likely to further boost listening by assisting users in the discovery of new shows.