The Unofficial Apple Archive, a website that gathers hundreds of videos and images from Apple campaigns since 1977, has launched, and we’ve made a roundup of the weird and wonderful standouts.

Created by Sam Henri Gold, the archive goes beyond what we already know about the company. It also revealed some campaigns that have not been previously seen, including unreleased advertisements and internal materials from the marketing team.

Sam didn’t give details on how he got these ads in order to protect his sources, as presumably only people involved in these projects still have access to them. Some of these videos and images seem to have been scrapped by Apple in a final stage, while others appear to be early drafts. Either way, it’s worth taking a look at some of them.

Apple introduced the iPod touch the same year as the iPhone, but the iPod didn’t have all the iPhone apps at first. It was only with a software update that the device got apps like Maps and Weather, and Apple seems to have created a fun TV ad to show that — which unfortunately never went on air.

The video shows backgrounds that match what appears on the screen, besides having an animated song. Apple then created another ad with the same proposal, but without the animated background and with a more peaceful song, and this one went on air. Which one do you prefer?

The fourth-generation iPod nano was introduced in 2008 in a variety of vivid colors, and of course Apple highlighted that in the popular “nano-chromatic” campaign. But before reaching the final result, Apple created some other similar videos that were never revealed until now.

One of them is “Colors,” which shows iPods floating with the colors mixing with each other. While the idea might be cool, people might get confused with a two-color iPod showing up on the ad.

Apple has created a version where each iPod appears with a colored track at the bottom, and another where iPods just fall on each other in different positions. At least for me, these videos don’t seem to be as convincing as the official ad that Apple chose. You can clearly see that these ads were created way before the official release, as the video effects have not been polished and the iPod storage capacity appears as “EVTb,” which happens when the marketing team does not yet have access to the product specifications.

Apple has always emphasized its partnership with AT&T, which for many years was the only carrier in the U.S. that offered the iPhone. They created an iPhone 3G ad to celebrate this collaboration between the two companies, but it was never published.

The ad is quite pointless, showing some combinations on the screen of two iPhones until the Apple and AT&T logos appear. There are no relevant iPhone features or even AT&T advantages that have been featured in the video, so the reason it was scrapped seems pretty obvious.

When the 6th-generation iPod nano came out in 2010, one of the most appealing aspects besides the touchscreen was its small format with a clip. Apple tried to demonstrate that in a very unusual way, which didn’t seem to work out well. 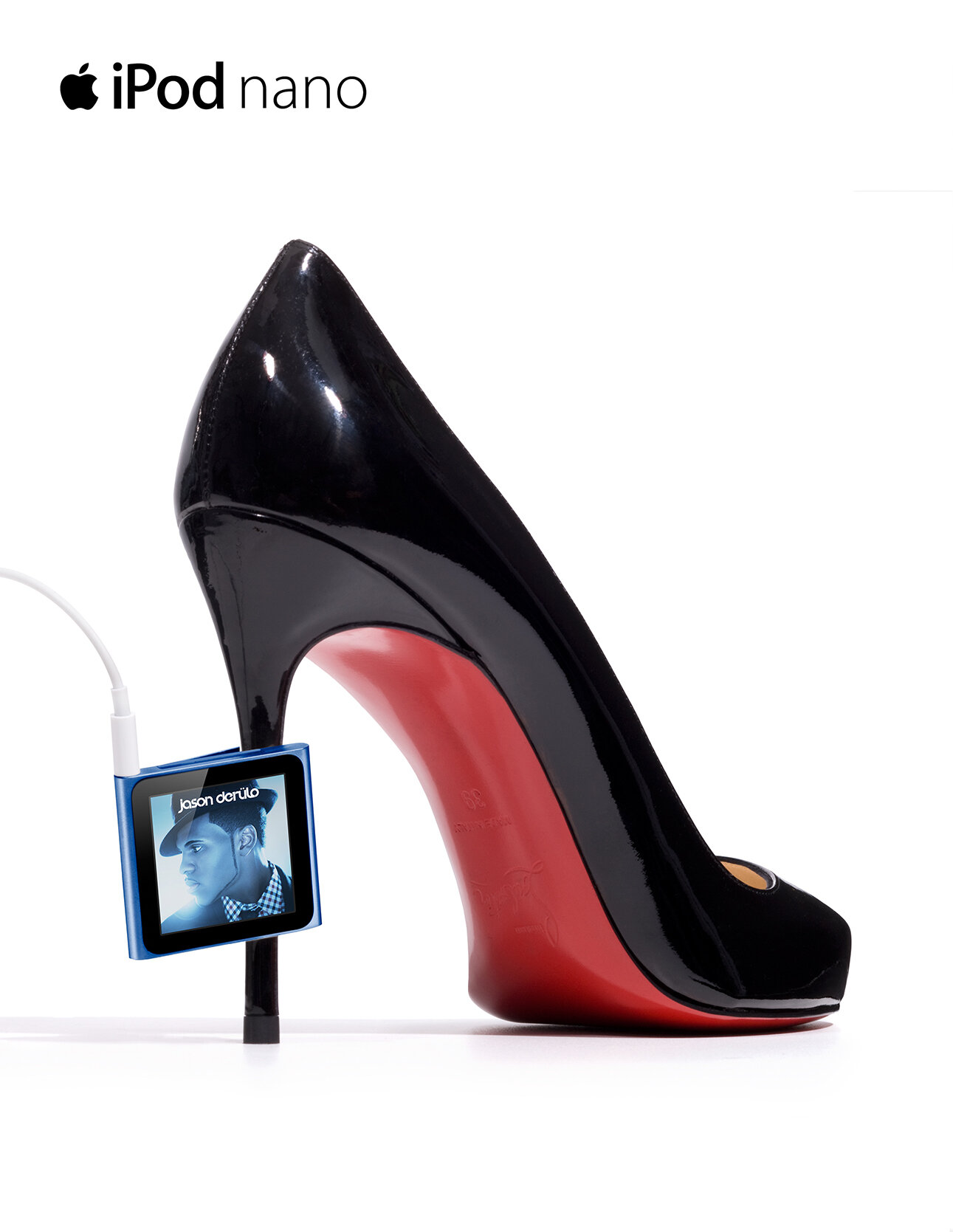 The unreleased campaign shows the iPod attached in unexpected places like a high heel, a knife, and a popcorn bucket. “Goes well with anything. Now you can clip and go with all your favorite music” says the ad. After all, the company decided to focus on just the typical way to use an iPod nano, as we can see in the first TV ad.

The lightness of Air

Remember when Apple introduced the redesigned MacBook Air in 2010? According to Steve Jobs, the iPad was the inspiration behind the new MacBook Air, which was thinner and lighter compared to the original model. Also, with OS X Lion, users could use multi-touch gestures on the trackpad for the first time.

And that’s exactly what this ad shows with people working on a MacBook Air and holding it with just one hand. It’s a great and fun video, but I felt a bit dizzy after seeing the MacBook being lifted and flipped around. Maybe that’s why Apple gave it up on it.

Apple Music was introduced in 2015, but Apple was already working on it long before that. The Unofficial Apple Archive got some interesting images of an official mockup created for Apple’s streaming webpage back then. 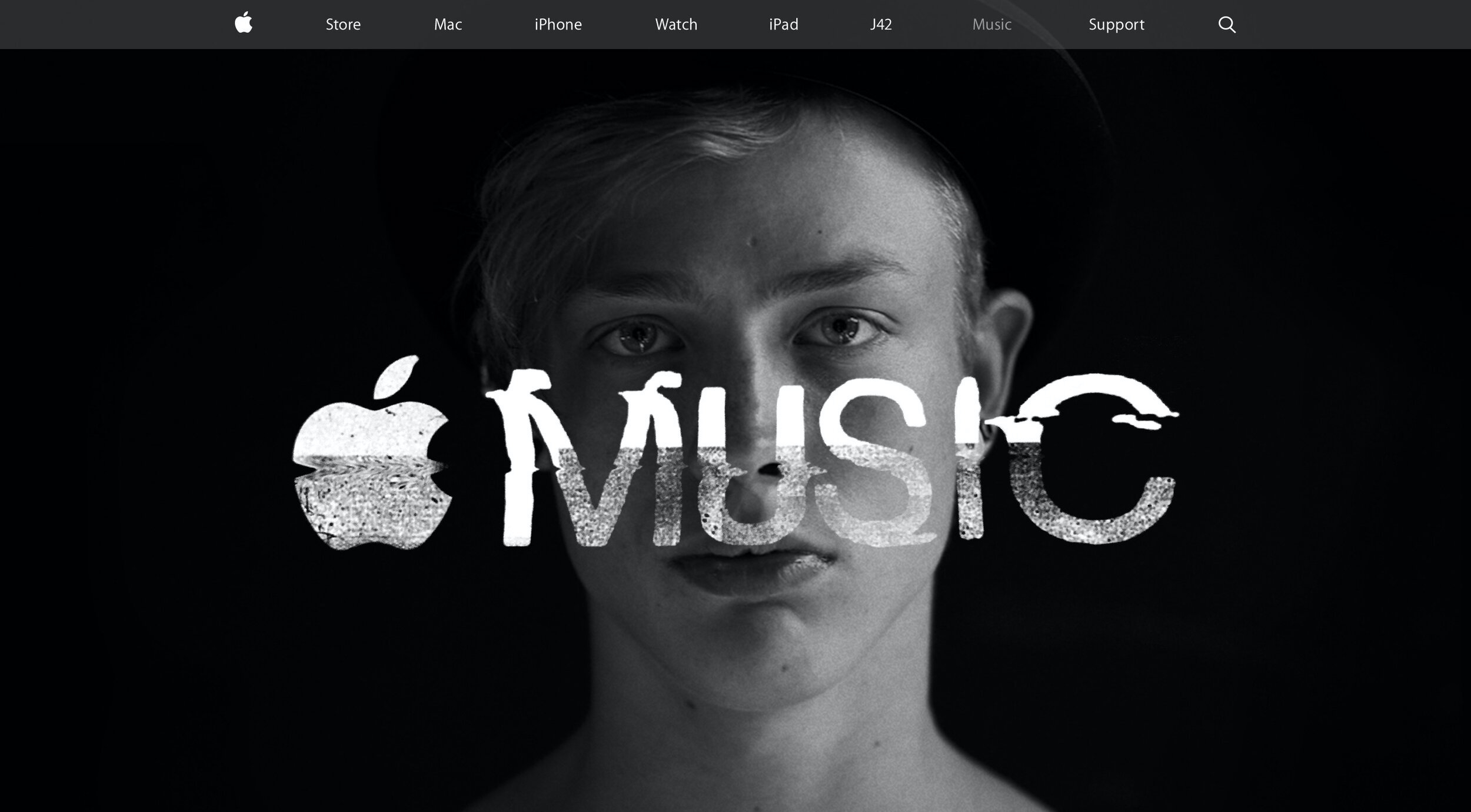 The page is quite different from the official one, but the most interesting thing is the “J42” in the menu of Apple’s website. “J42” is the codename for fourth-generation Apple TV, which didn’t exist at the time. As Guilherme Rambo said on Twitter, this corroborates the fact that the people who are working on other teams don’t know everything about the ongoing projects.

Apple has made a series of ads for iPhone 6, including the campaign, “If it’s not an iPhone, it’s not an iPhone.” But there’s also a lost video that shows how users can customize their iPhones with accessories.

In addition to the colorful and super decorative cases, the ad also features some Beats headphones and external camera lenses. It’s a shame that the video was discarded, but I have no doubt that it inspired the MacBook Air “Stickers” ad and the Korean “AirPods cases” video.

‘Wonderful tools’ is older than we thought

If you watched the last Apple event in September 2019, you’ve probably seen the “Wonderful tools” video. But thanks to The Unofficial Apple Archive, we now know that Apple created this animation a long time ago, in 2016.

It was initially created to celebrate Apple’s 40th anniversary, but the company gave up the idea and then made the “40 Years in 40 Seconds” video that was first shown at the iPhone SE launch event. You can see products like the 2013 Mac Pro, the old MacBook Pro, and the EarPods in the original project. The song was different, too, and the final message is just, “Designed by Apple in California.”

However, Apple didn’t throw the idea away as they tried to use it again sometime in 2018 — probably between the launch of the iPhone XS and the announcement of the third-generation iPad Pro. The new video is similar to the final version, but it still shows an old iPad and doesn’t mention the Apple TV+ or Find My iPhone, which was revamped in 2019.

The idea was once again dropped until it made its way into the animation we saw during the announcement of the iPhone 11.

Art concepts for the iPhone 7 launch

This is probably the one that got me most intrigued. The archive got conceptual images created for the iPhone 7 launch in 2016, and they reveal some interesting things. The concepts suggest that Apple considered making a pre-announcement of the iPhone 7, as shown by the image of the company’s website with a countdown. 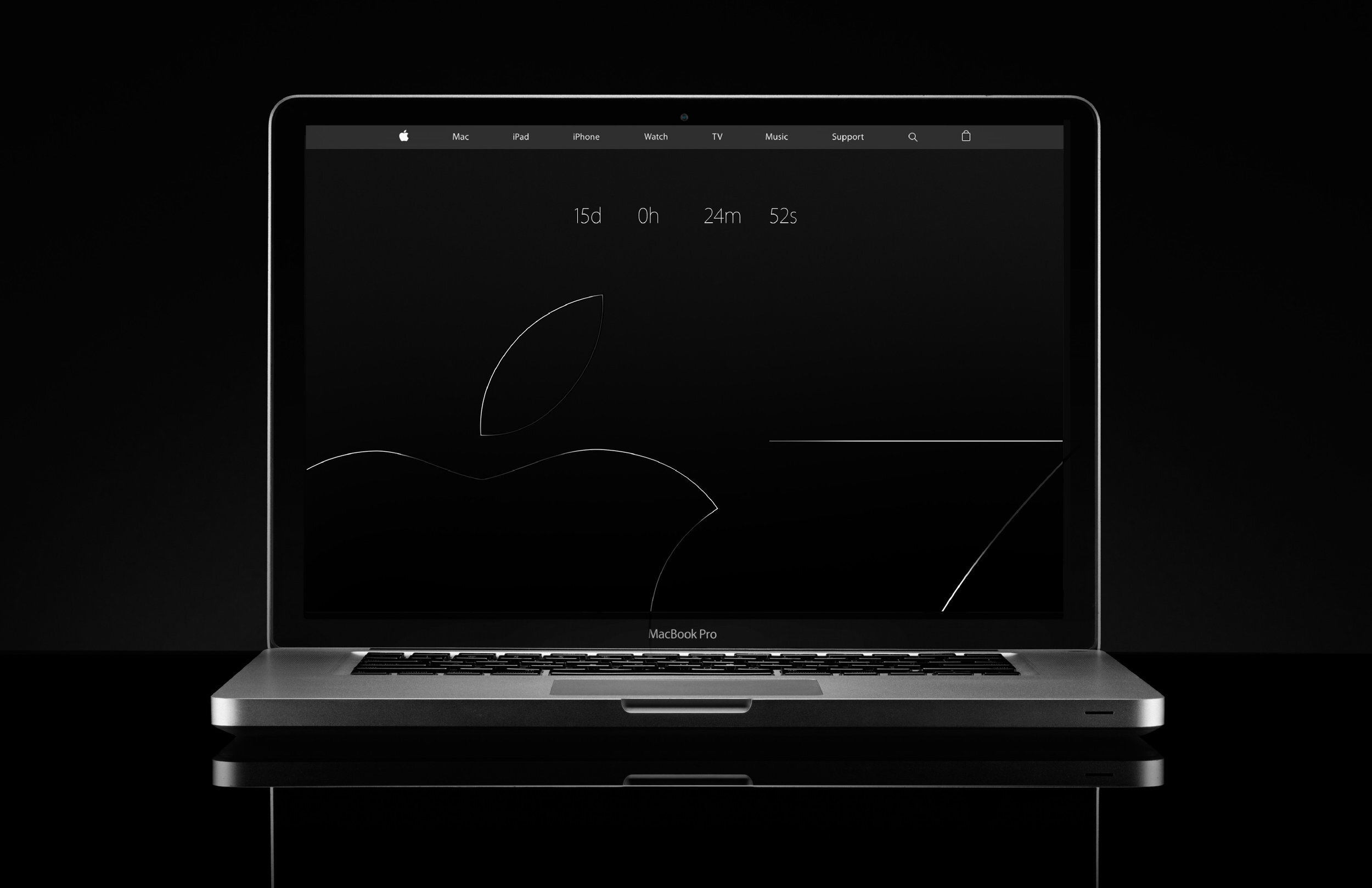 There are several images showing Apple Stores and billboards with the Apple logo and a “7” brand, as well as a kit that would probably be given to the press. It would be interesting if Apple had actually given more clues as to what would be announced, but that was not the case.

Apple has done great campaigns for the iPad, but this ad is so weird that it has never been published. It’s a short one that basically ironically discusses whether the iPad is a real computer, to conclude that it doesn’t matter.

Apple dropped that idea to come up with the famous question, “What’s a computer?” At the same time, they also considered launching a campaign with illustrations about how “computers are dying” and that other “tablets are dead.” I wonder why that was never released.

One of the unreleased videos is a comparison of iPhone 8 and iPhone X, which were announced together in 2017. The nearly two-minute video shows that both phones have several features in common, but in a slightly weird way.

Despite the fact that I can barely read what appears during the video, it shows the never-released gold iPhone X. It’s very likely that Apple canceled this model at the last minute, given that campaigns had been created with it.

The AirPower was canceled and Apple never mentioned it again, but long before that happened, the company prepared a short video to promote the product on social networks.

While people on social networks believe that the video is fake, people from the advertising business know that it’s common to create mockups just to demonstrate the idea of what the final video will be. Since AirPower was never released, Apple probably never finished that ad.

Animoji × Grammys — case study and behind the scenes

It’s not very common to see details about how Apple campaigns are made, which is why this case study about the Animoji videos featured in the 2018 Grammy Awards is so exciting. 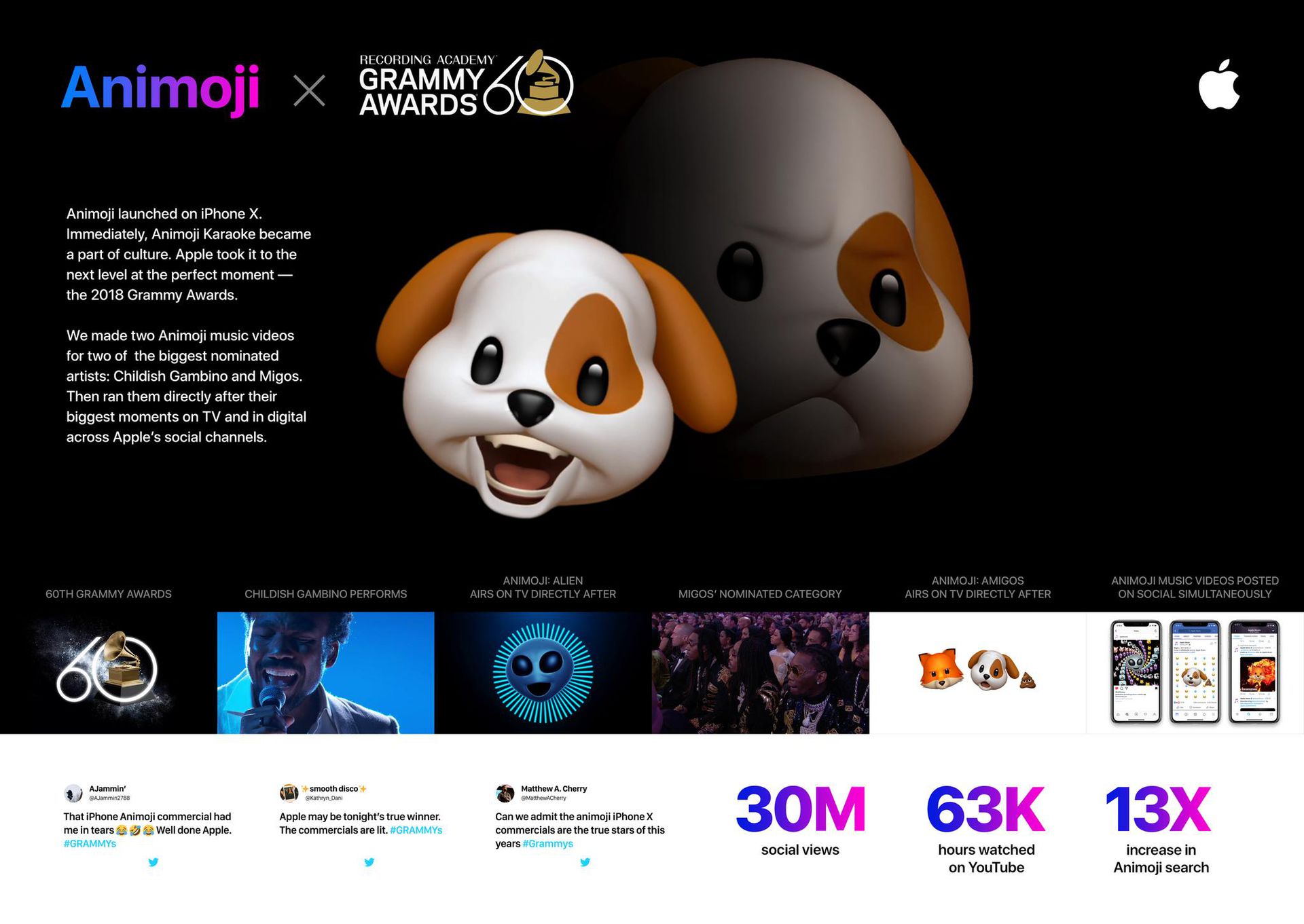 Inside information reveals Apple’s strategy to highlight Animoji at the right time to attract public attention. The company is always on the lookout on social networks and also in the press to see how people will react about the campaigns. There’s also a nice video that shows how Animoji from the commercials are animated.

The list of other amazing things you can find in The Unofficial Apple Archive is long, and I recommend you check it out here. And if you appreciate the content as much as I do, it’s worth making a donation to help Sam maintain the website running.

Which campaigns did you like the most? Let us know in the comments below.

A special thanks to Sam for sharing the videos with us.