Back to the Mac 016: Behind the scenes of Jeff’s video editing workspace 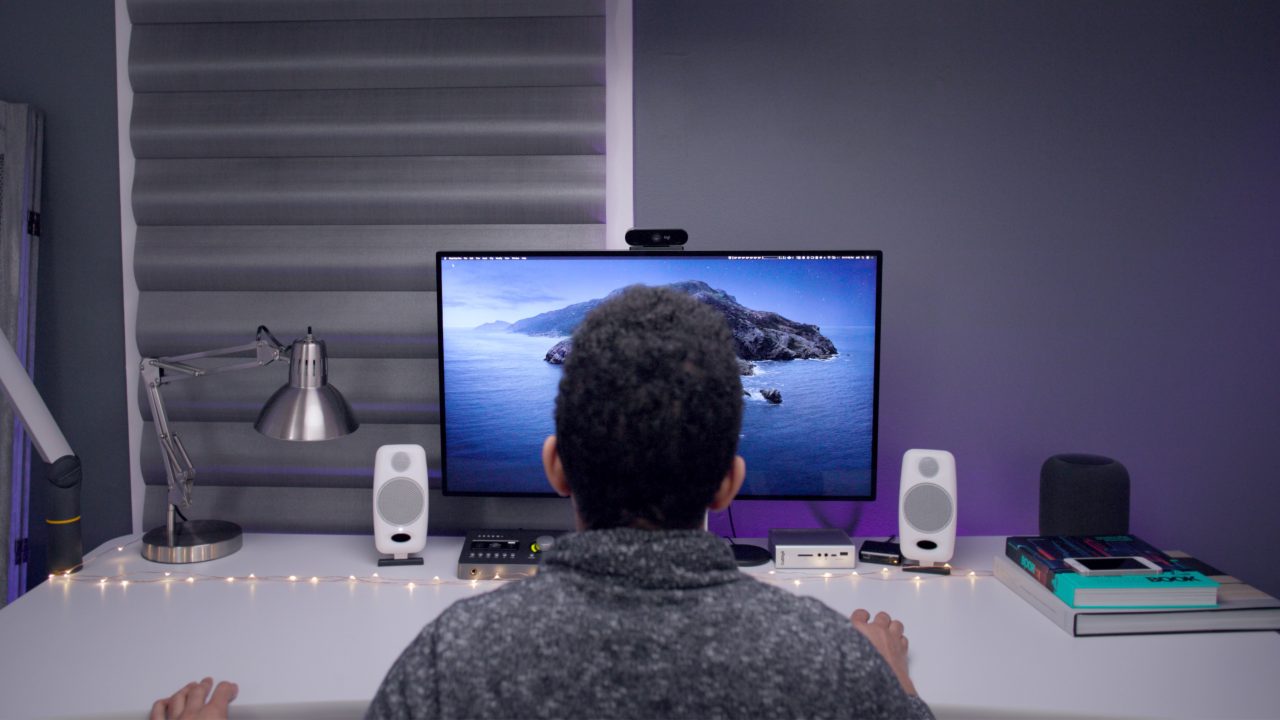 Quite a few viewers and readers have asked me to do a behind the scenes look at my video editing workspace, so in this latest edition of Back to the Mac I’ve decided to do just that.

Although my setup is currently built around a Mac Pro + Pro Display XDR, a similar setup can be achieved with virtually any Mac machine and monitor combination. Watch our hands-on behind the scenes video for a look at the hardware on my editing desk.

Although I do at times use a MacBook Pro and iPad Pro for work, the Mac Pro (hands-on) is the current centerpiece of my video editing workflow. It’s where I run all of the software related to creating videos. Although my previous base model iMac Pro, with its 32GB of RAM and 8-core Xeon CPU, was more than capable enough for my video editing needs, the Mac Pro is an improvement in some ways.

As I’ve explained several times before, I primarily enjoy using the Mac Pro due to its upgradability. Being able to add more RAM and more storage space is something you couldn’t do on the iMac Pro without jumping through a bunch of hoops. It’s nice to be able to crack open the Mac Pro and upgrade the machine in just a few minutes.

For video editing in particular, the ability to upgrade the internal storage of the Mac Pro is convenient. Not only can you add an absurd amount of SSD storage, but you can also add a full-on 24TB Promise Pegasus RAID system internally, if you choose to do so. 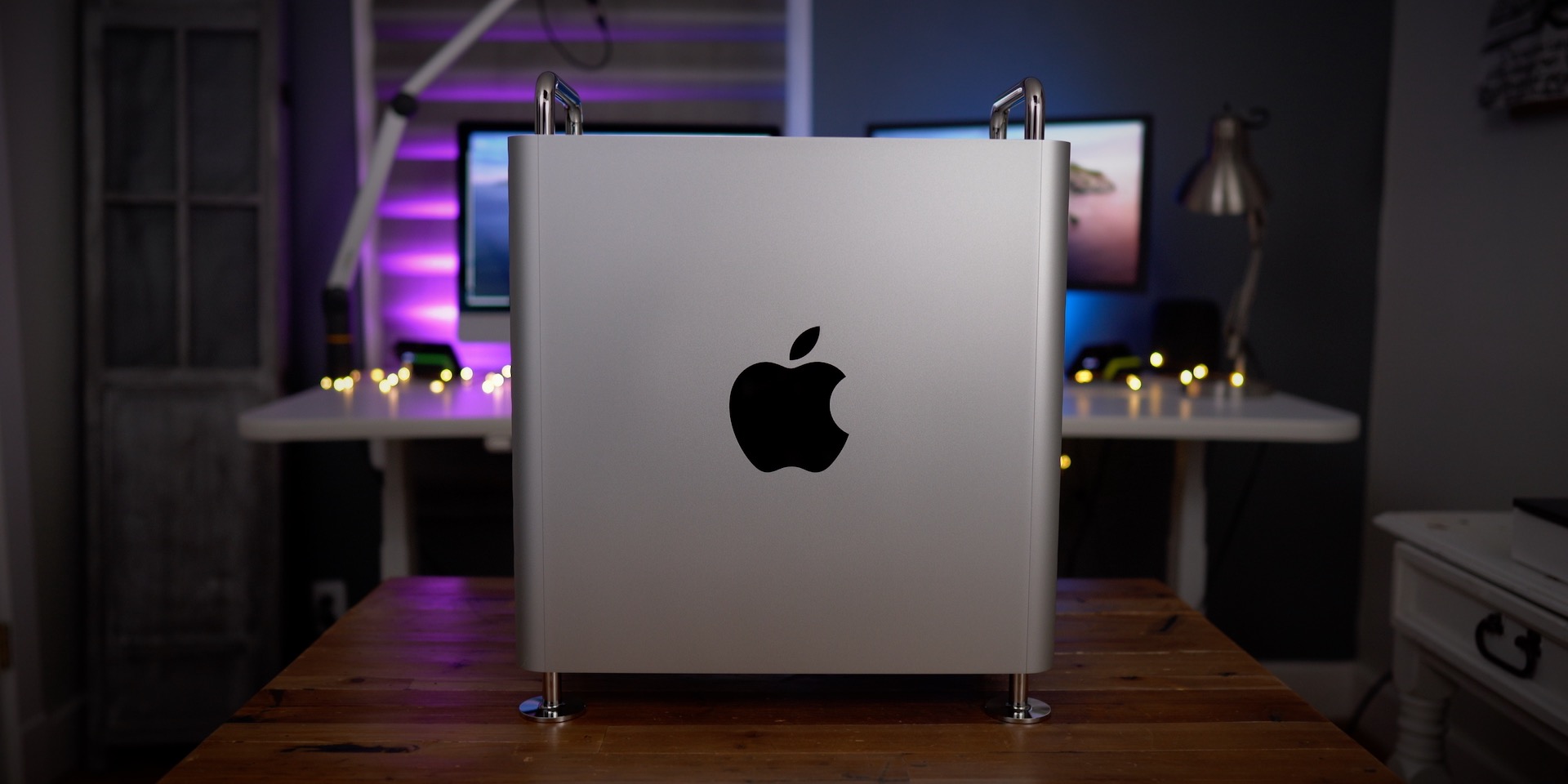 The Mac Pro is also nice due to the ability to add PCIe cards such as capture cards, or perhaps in the future, advanced audio cards. Having direct PCIe access is a big win for those looking to have their Mac grow as their needs demand it.

But the Mac Pro is far from perfect for many casual or so-called “pro-sumer” editors. First and foremost, unlike the iMac, it doesn’t come with a built-in display, which could potentially drive up the cost significantly. It’s also lacking conveniences like an SD Card slot, and easy-to-access I/O like on the back of the iMac Pro. 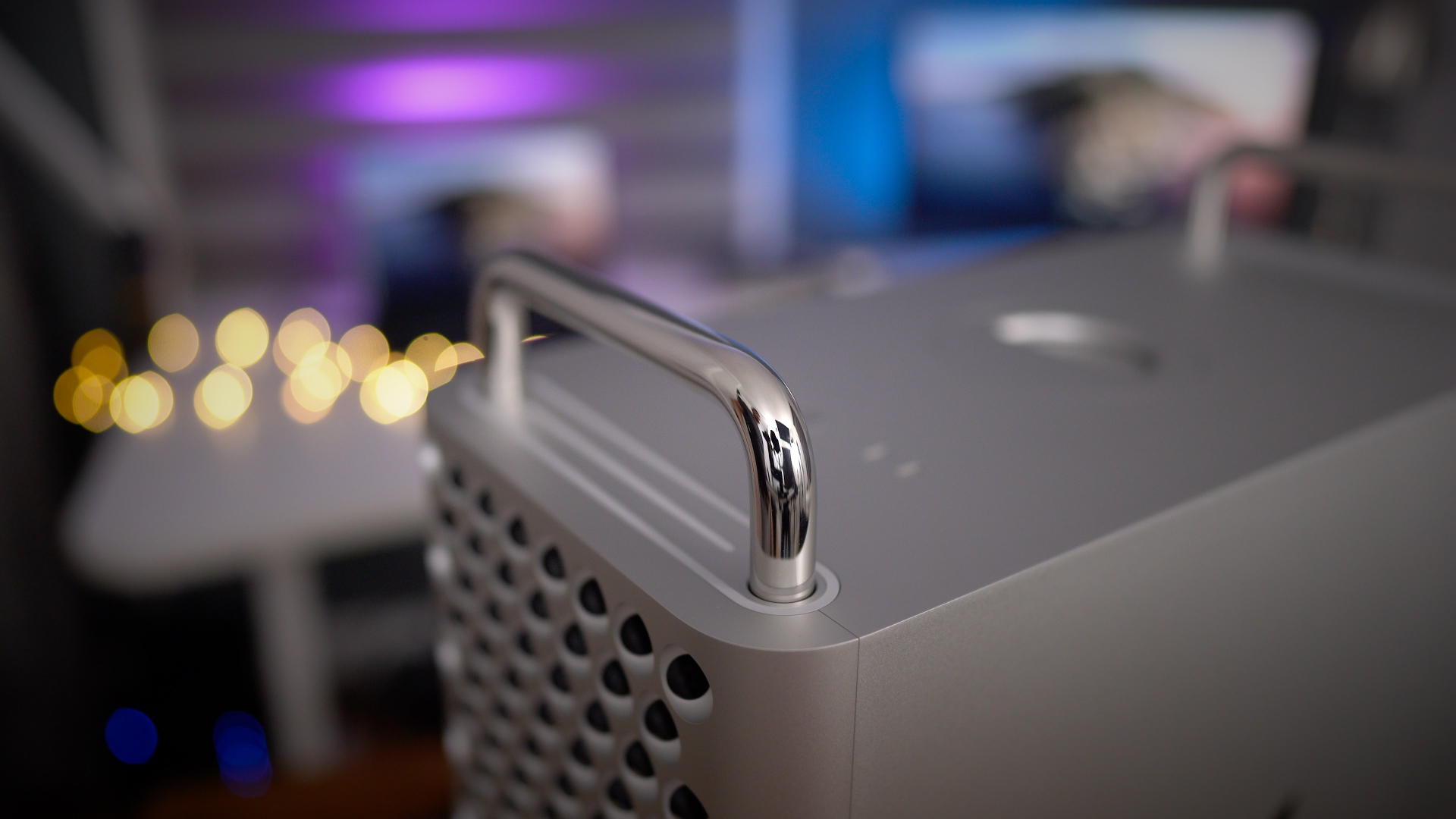 In my upcoming review of the Mac Pro, I’ll be discussing these potential shortcomings more in-depth. I think most “pro-sumer” users will be better served by an iMac or iMac Pro, but there are definitely some users out there that would benefit more from the Mac Pro over the long term.

The 32-inch native 6K Pro Display XDR (hands-on) is a dream display for editing 4K video. It provides you with the workspace to view full resolution 4K while still having plenty of room for the timeline and browse in Final Cut Pro X. And if HDR workflows are a part of your routine, then the true 10-bit XDR Display with its P3 wide color and 1000 nits of sustained brightness and 1600 nits of peak brightness should more than meet your needs. 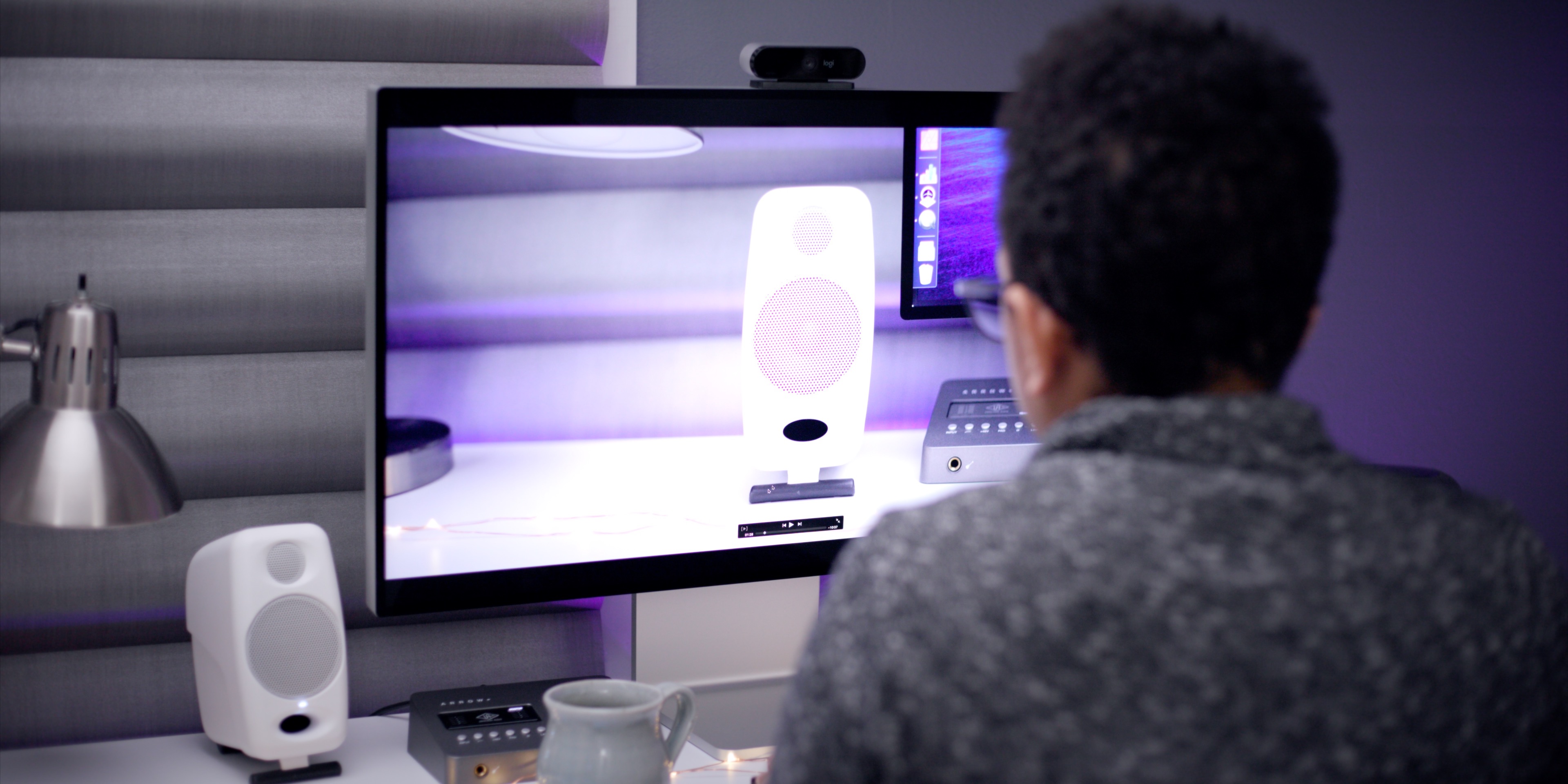 Although it can be handy to have two displays on the desktop, I find that the Pro Display XDR has enough size and on-screen real estate to make a secondary display unnecessary. For example, it’s possible to have a Final Cut Pro X session going while showing a Safari or Ulysses window on the screen at the same time. 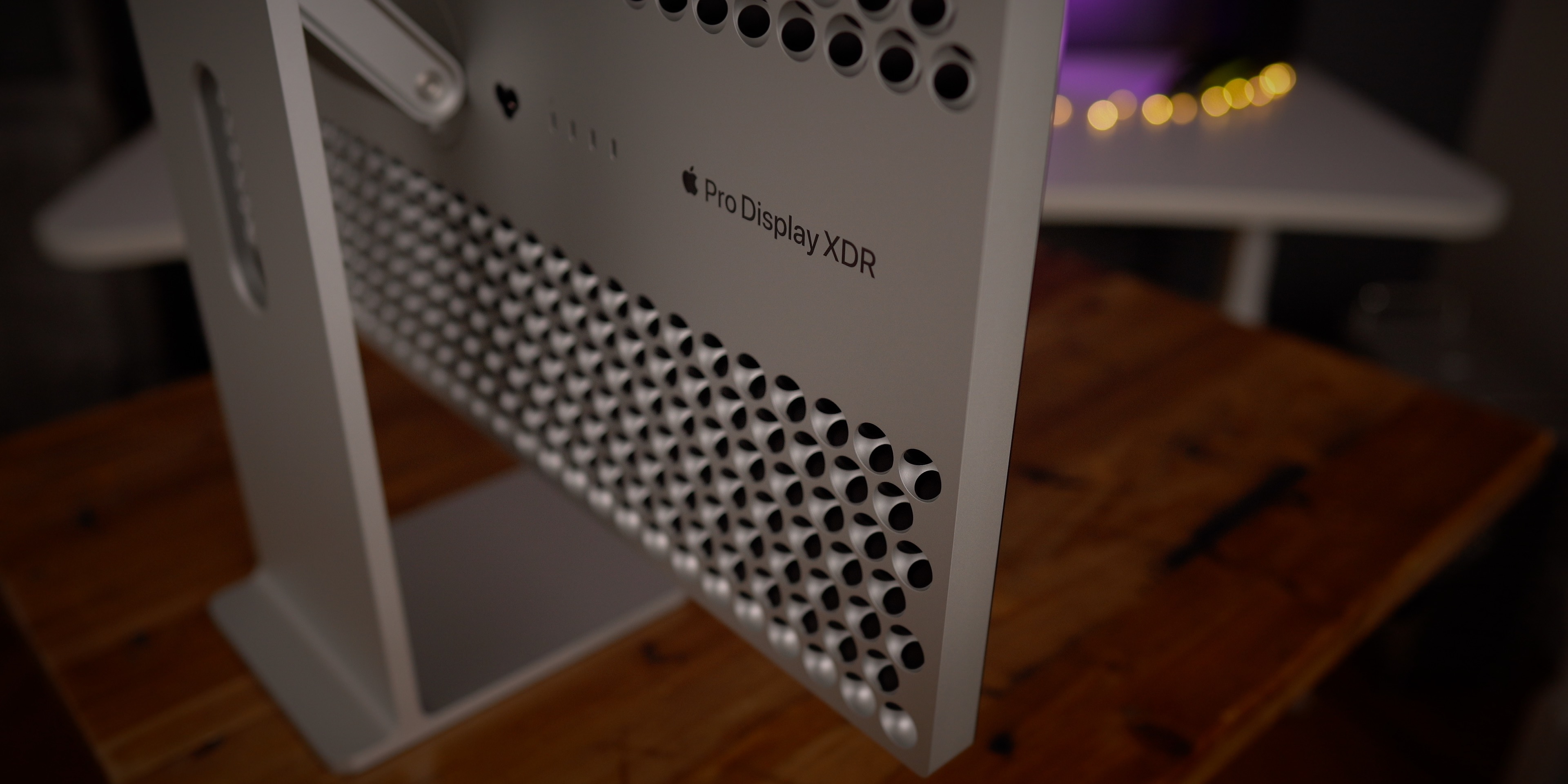 The newest item to my video editing workspace is the Keychron K2 (review) wireless mechanical keyboard. 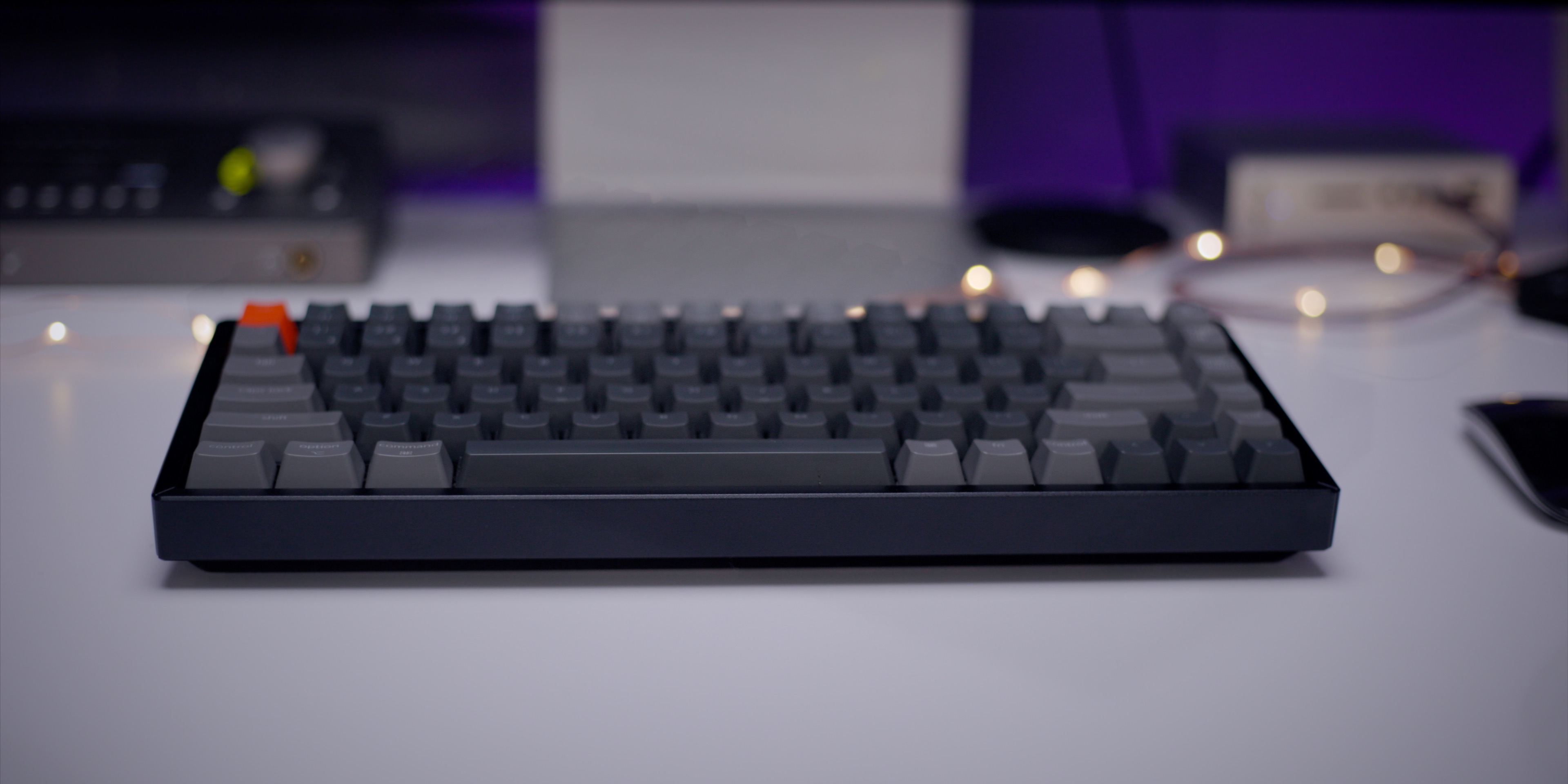 Wireless mechanical keyboards are still a rarity for whatever reason, but my overall impression of the Keychron K2 is fairly glowing. Not only is it wireless, but it utilizes Gateron Brown keyboard switches which provide great tactile response. The keys also have an extremely subtle tacky feeling, which adds to the tactile response. 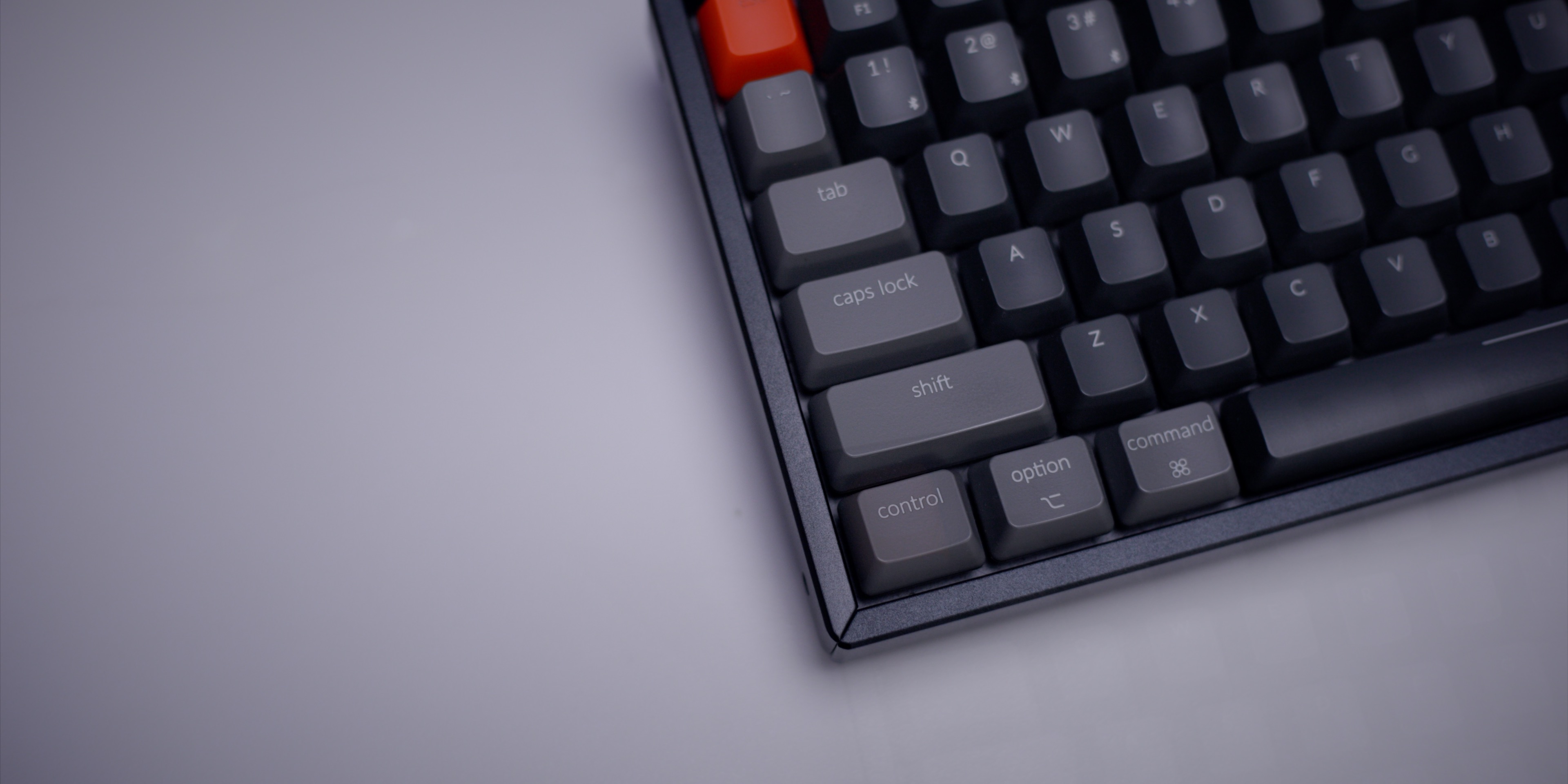 My biggest issue with the Keychron K2 is battery life, which admittedly isn’t great, but it’s not bad enough to make it a deal-breaker. Be sure to check out our full review of the K2 for the details.

The Thunderbolt 3-powered Universal Audio Arrow (hands-on) is my go-to audio interface for monitoring and recording audio for my videos. Its bus-powered compact all-aluminum design means that it looks nice on the desktop.

I also love the fact that the UA Arrow places its XLR ports on the rear. This design allows my video editing workspace to stay relatively clutter-free in the process.

The UAD plug-ins allow users to custom tailor and fine-tune the sound of voices and instruments in a granular way, and these effects are applied on the fly in real-time with no discernible latency. I’ve built, what I like to believe, is a great-sounding processing chain that allows my voice to shine on video voiceovers. 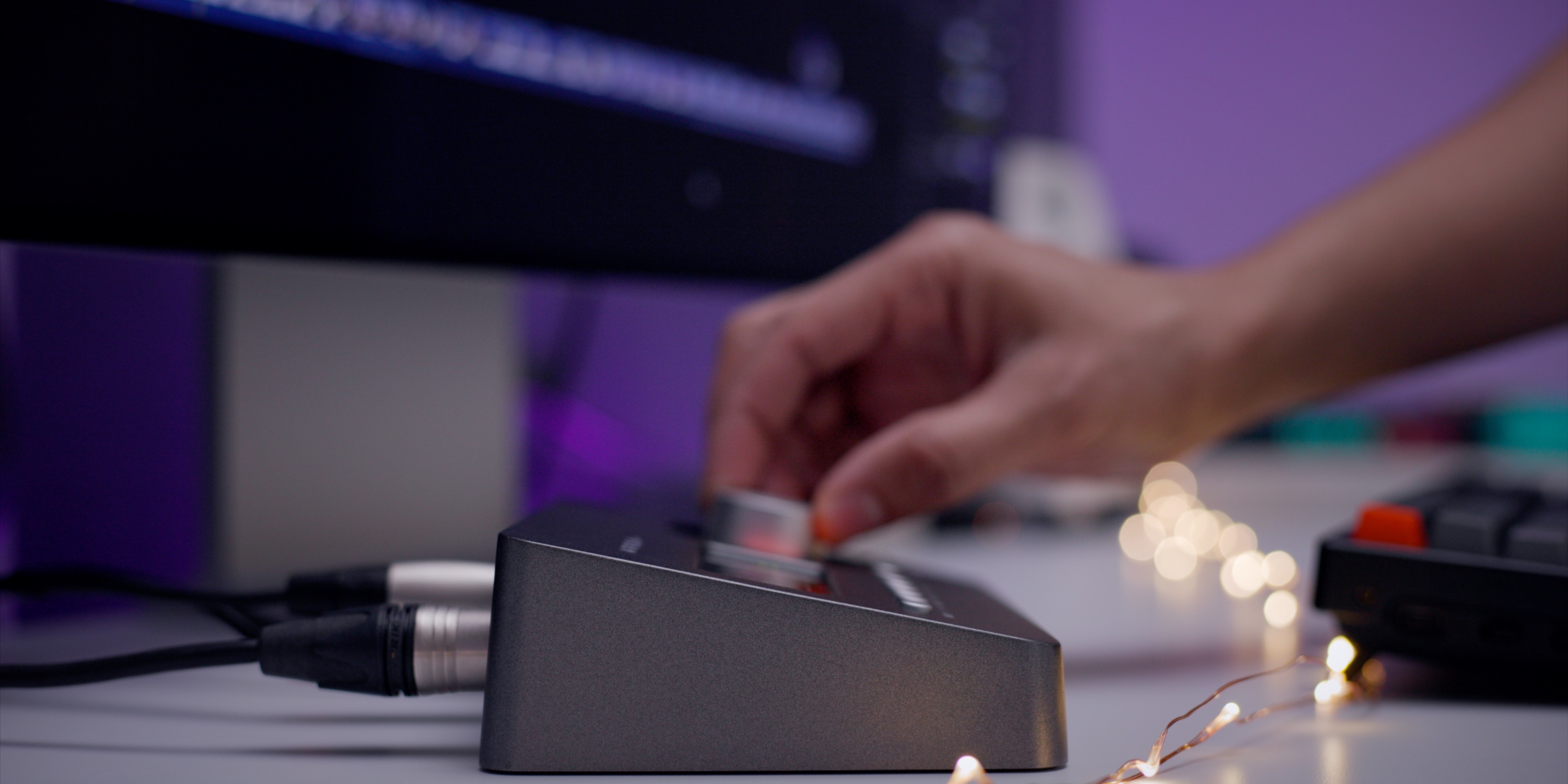 Before I incorporated the Sennheiser MKH 416 shotgun microphone into my voiceover workflow, I had quite a few friends suggest that I wouldn’t regret purchasing the legendary microphone. I couldn’t bring myself to drop the $999 MSRP, but I was able to pick one up on sale at B&H for $600 a few years back. 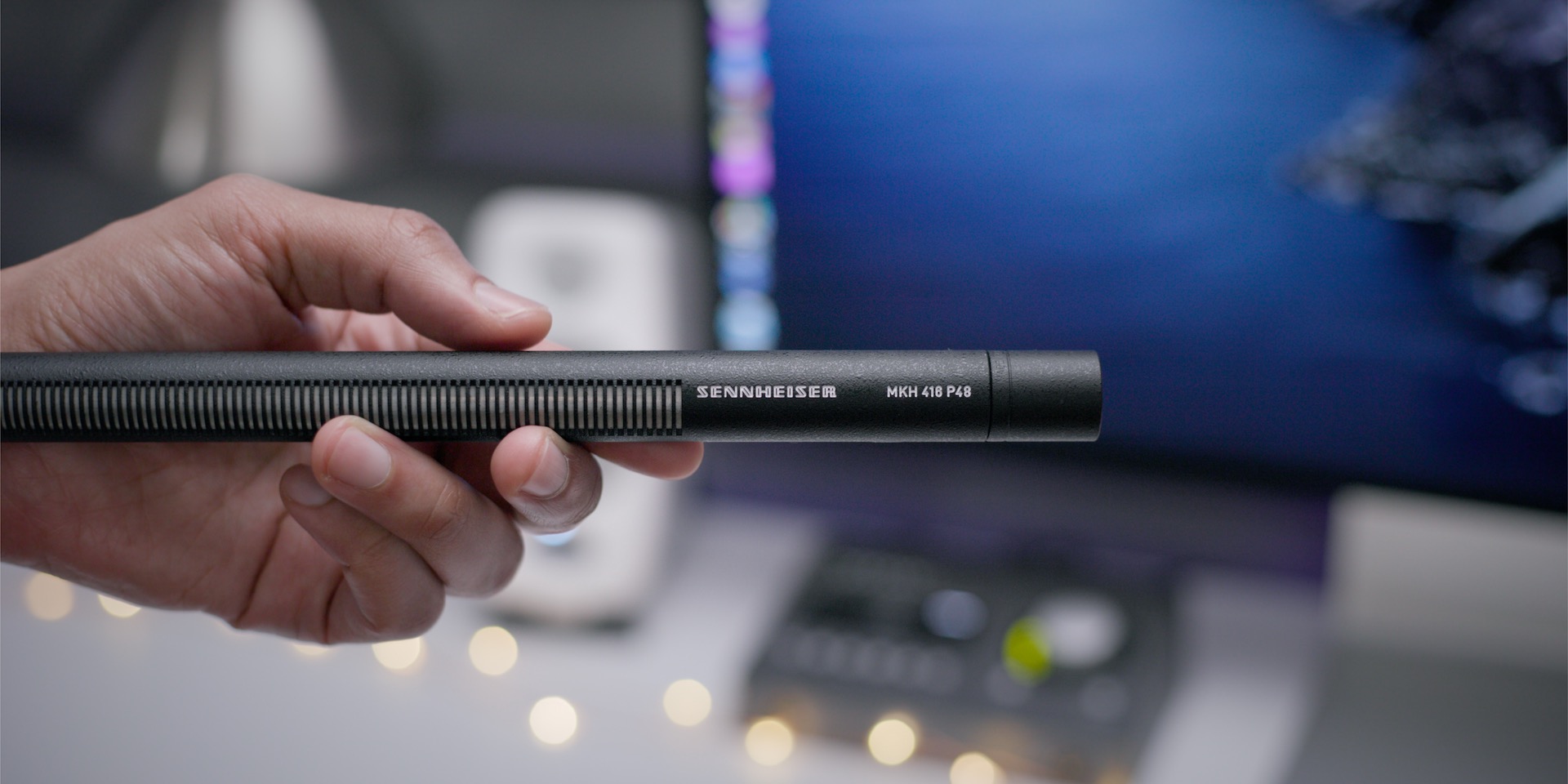 The MKH 416 is a legendary microphone for good reason — it sounds amazing with rich and deep vocals, rejects noise incredibly well, is super flexible in that it can be used in a variety of applications, and it’s built well. I think this microphone sounds amazing when paired with the UA Arrow, but I understand that sound “quality” can be subjective.

That said, there are other microphones that sound good enough and, if you can’t find the 416 on sale, are much more palatable from a price perspective. One such entry is Sennheiser’s MKE 600, which costs a whole lot less than the 416, and produces perfectly-acceptable sound.

The Yellowtec Mika is hands-down the best microphone boom arm on the market, and people seem to finally be agreeing with me after all these years of using it because you see it everywhere now. The Mika features rock-solid German design with its aluminum arm, along with an easy-to-use friction mounting mechanism that has yet to fail me over the years. 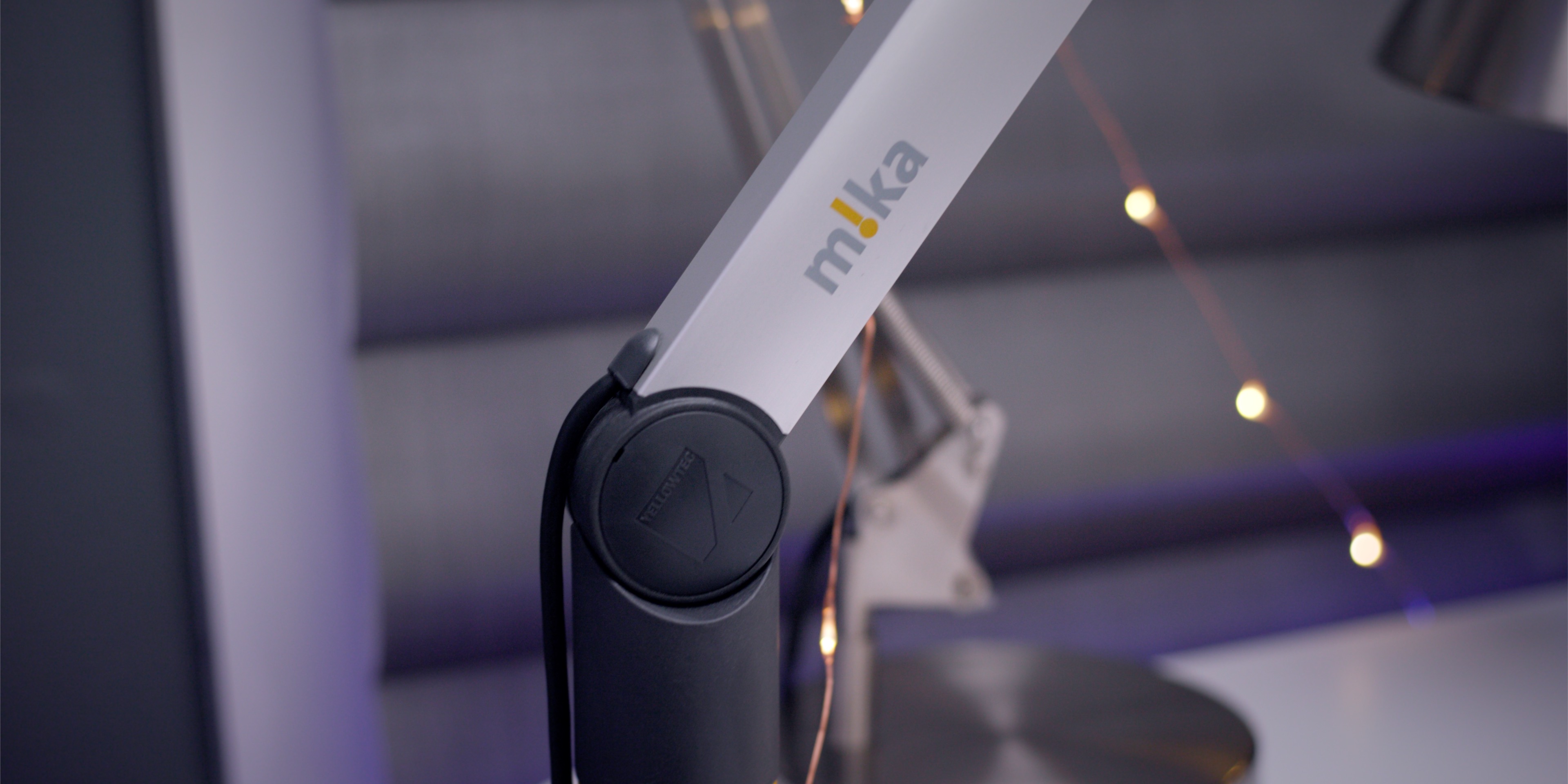 What makes the Mika so nice compared to the average boom arm is that the XLR cable is housed inside of the unit itself, which provides a super-clean look. Another major benefit of such a design is that you don’t have to worry about pinching your fingers in between the slats found on lesser solutions. I’ve noticed that other companies have started to use a pinch-free design, which is great, but the Mika was the first. 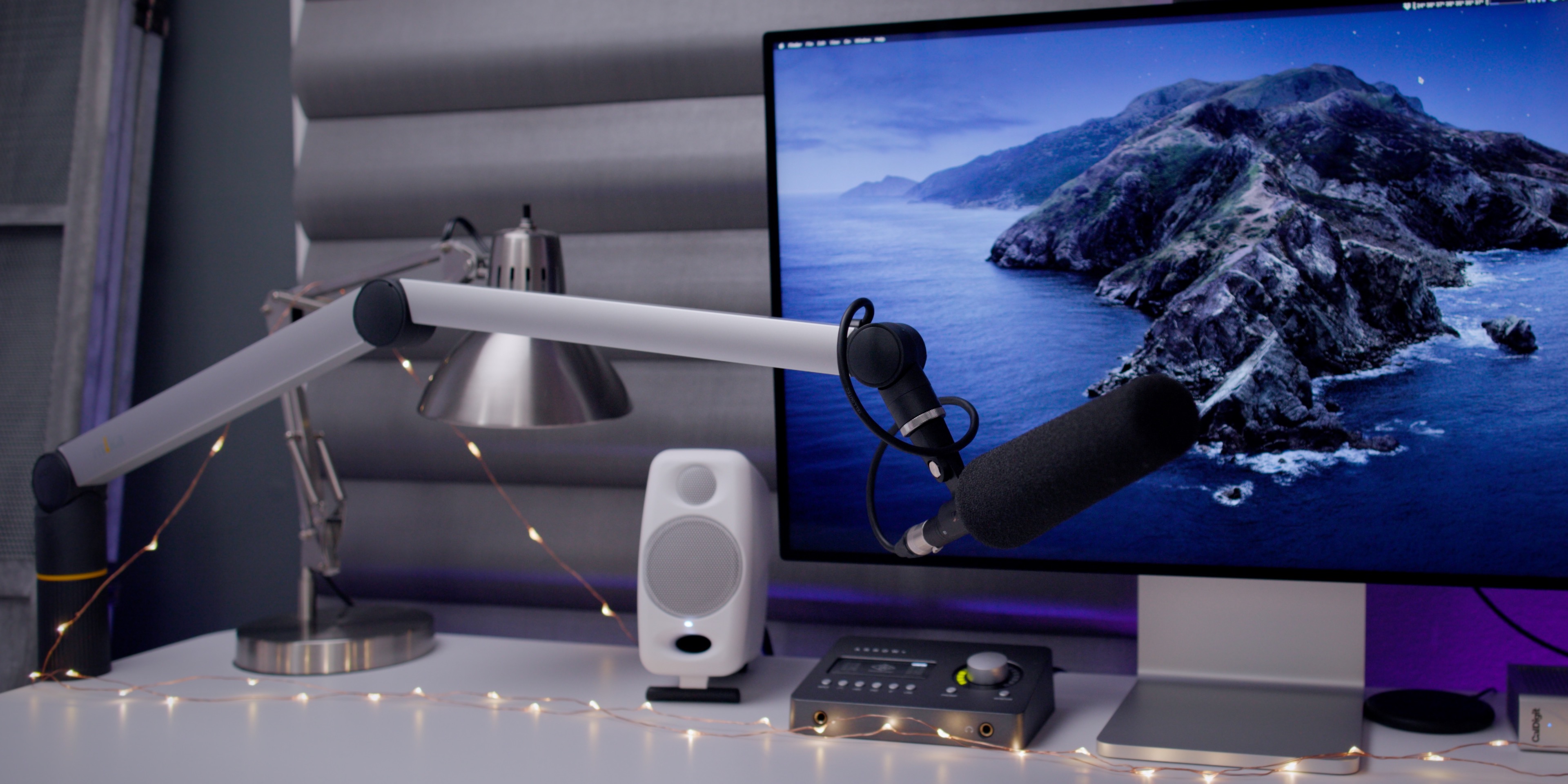 Headphones are an integral part of the voiceover process, and the Audio-Technica ATH-M50x (review) has been a part of my regular workflow for years. Not only have the headphones held up remarkably well under continued usage, but they sound good as well. 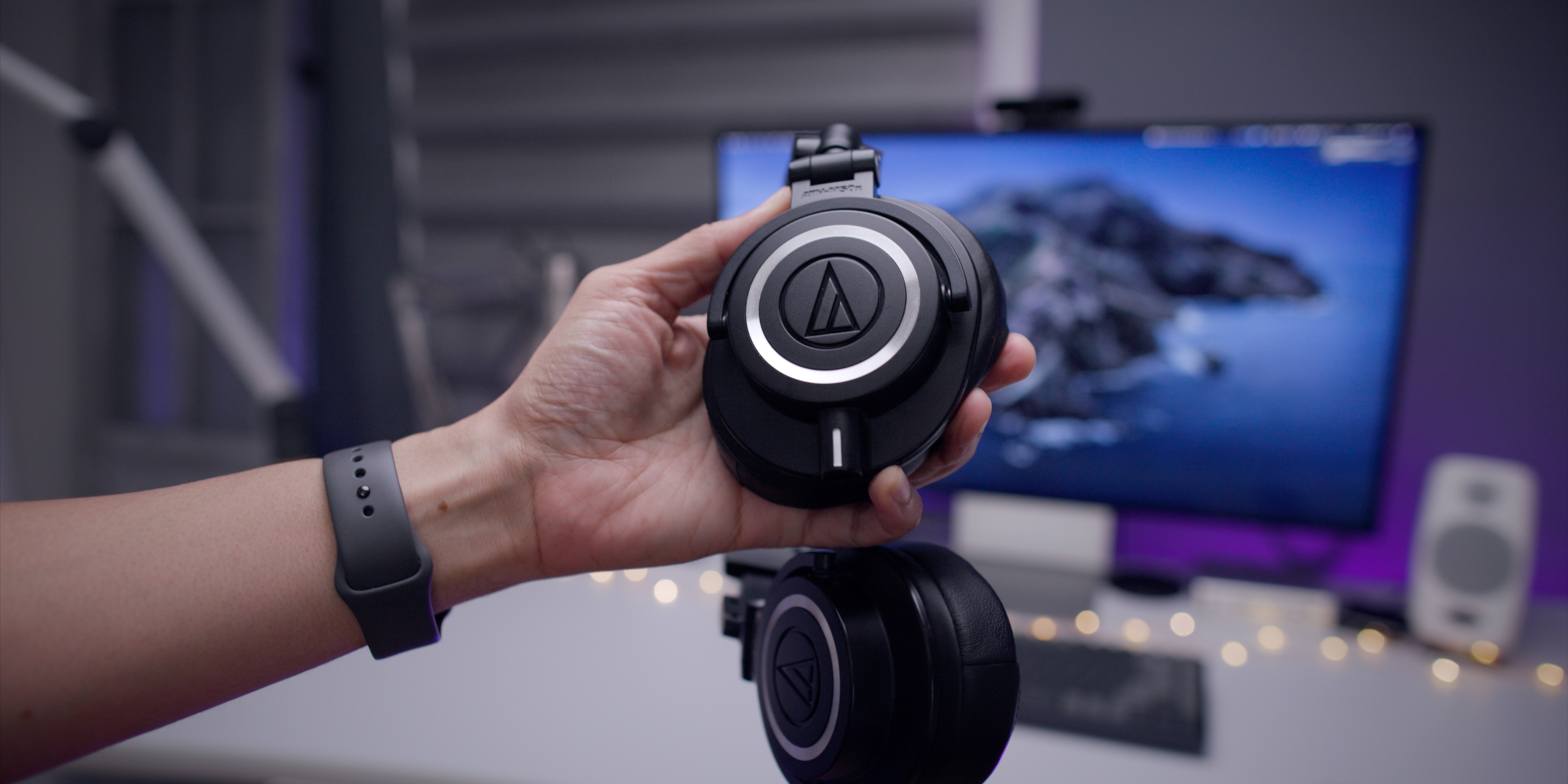 The biggest downside with these headphones is the ear cups, which aren’t as comfortable as I’d like, and will start to wear out after a couple of years. I recommend replacing the ear cups upfront with more comfortable third-party cups. 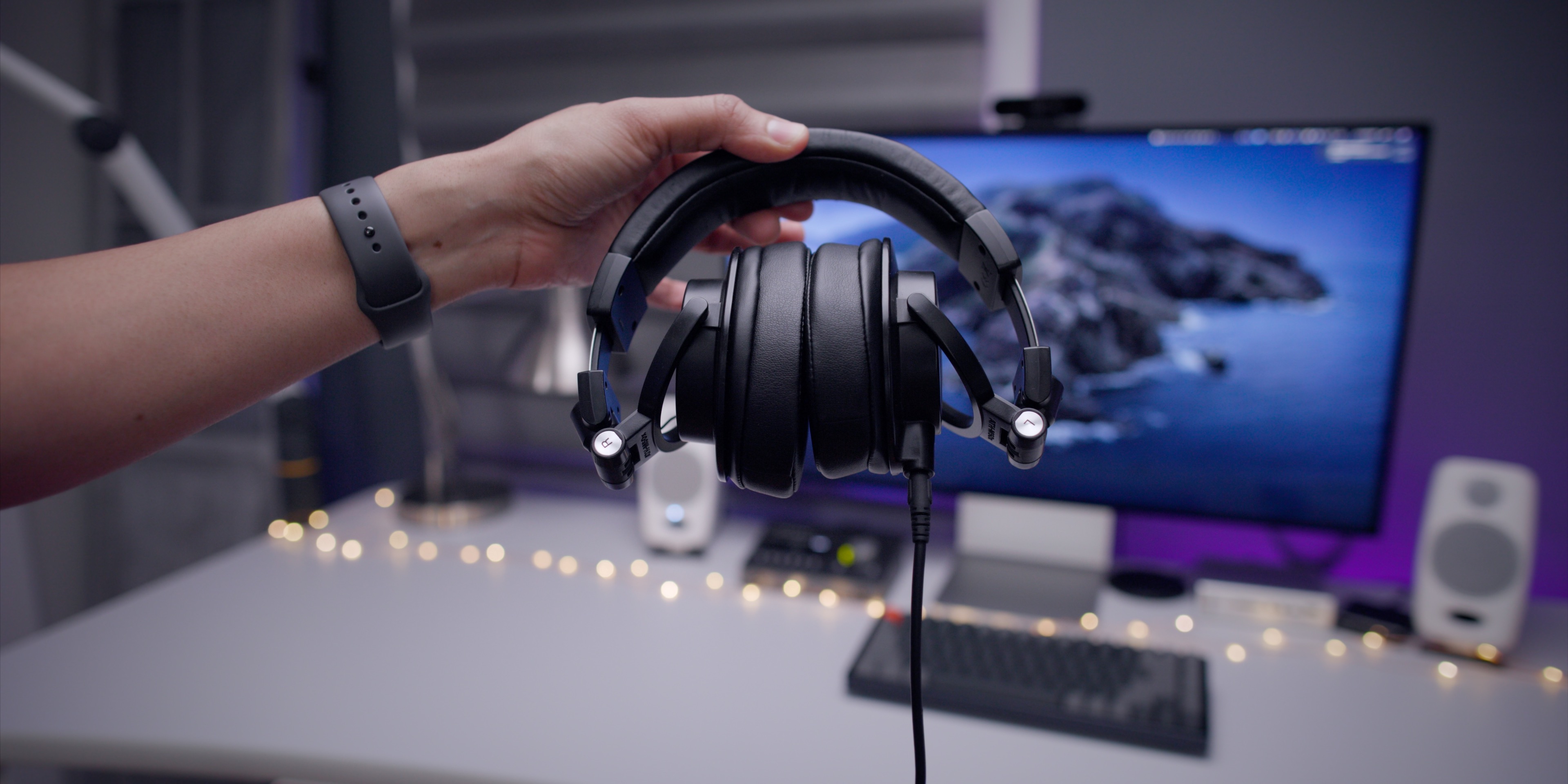 Although I use my headphones 80% of the time when monitoring audio for video editing, the newly-acquired iLoud Micro Monitors handle the rest of the heavy lifting. These monitors, which were recommended to me by friend of 9to5Mac Jonathan Morrison, sound much better than their small stature might indicate. 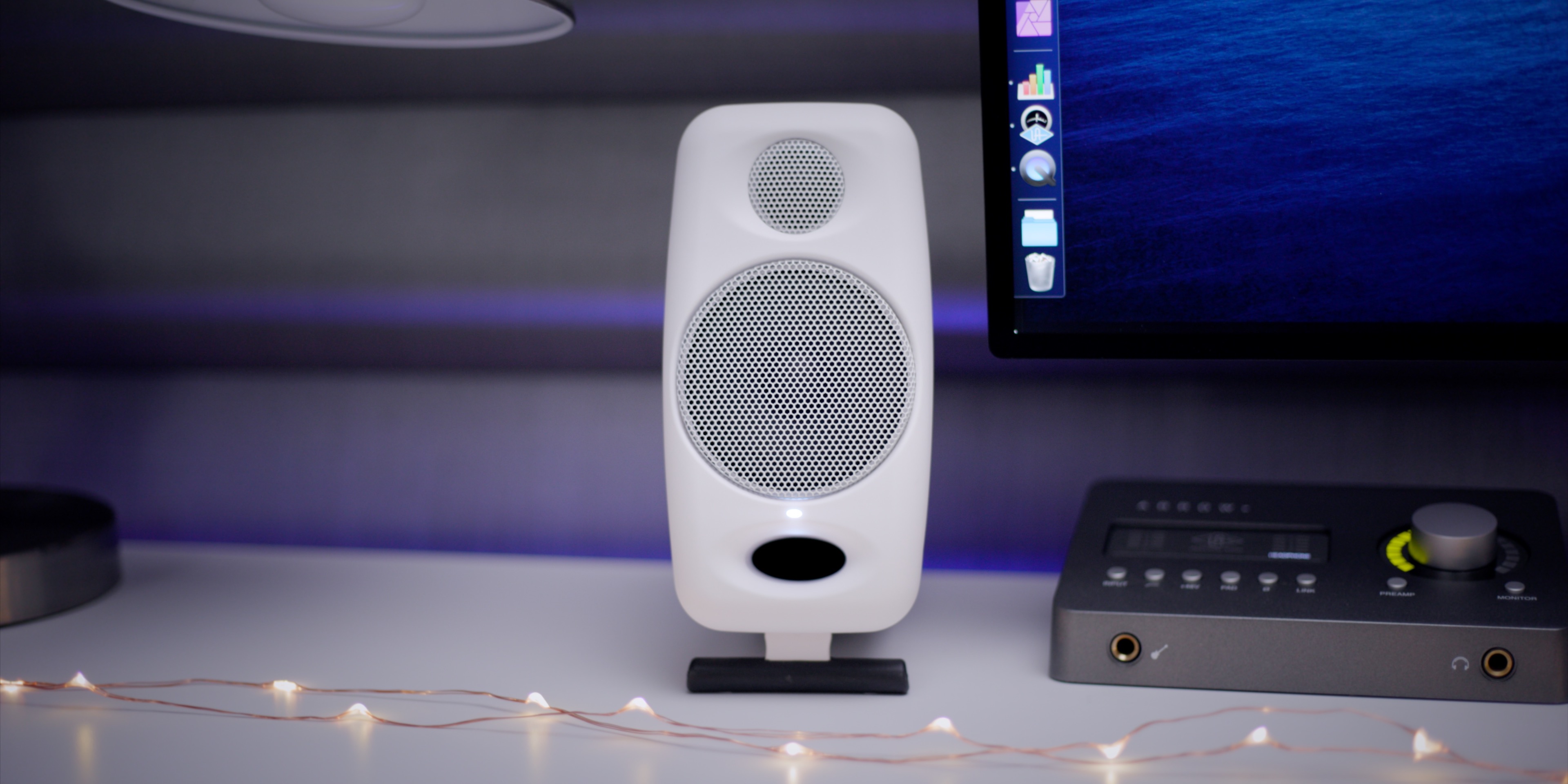 Although you won’t get the type of low-end sound possible with larger monitors featuring larger woofers, or via setups with a dedicated subwoofer, I was surprised by how much punch the Micro Monitors had. 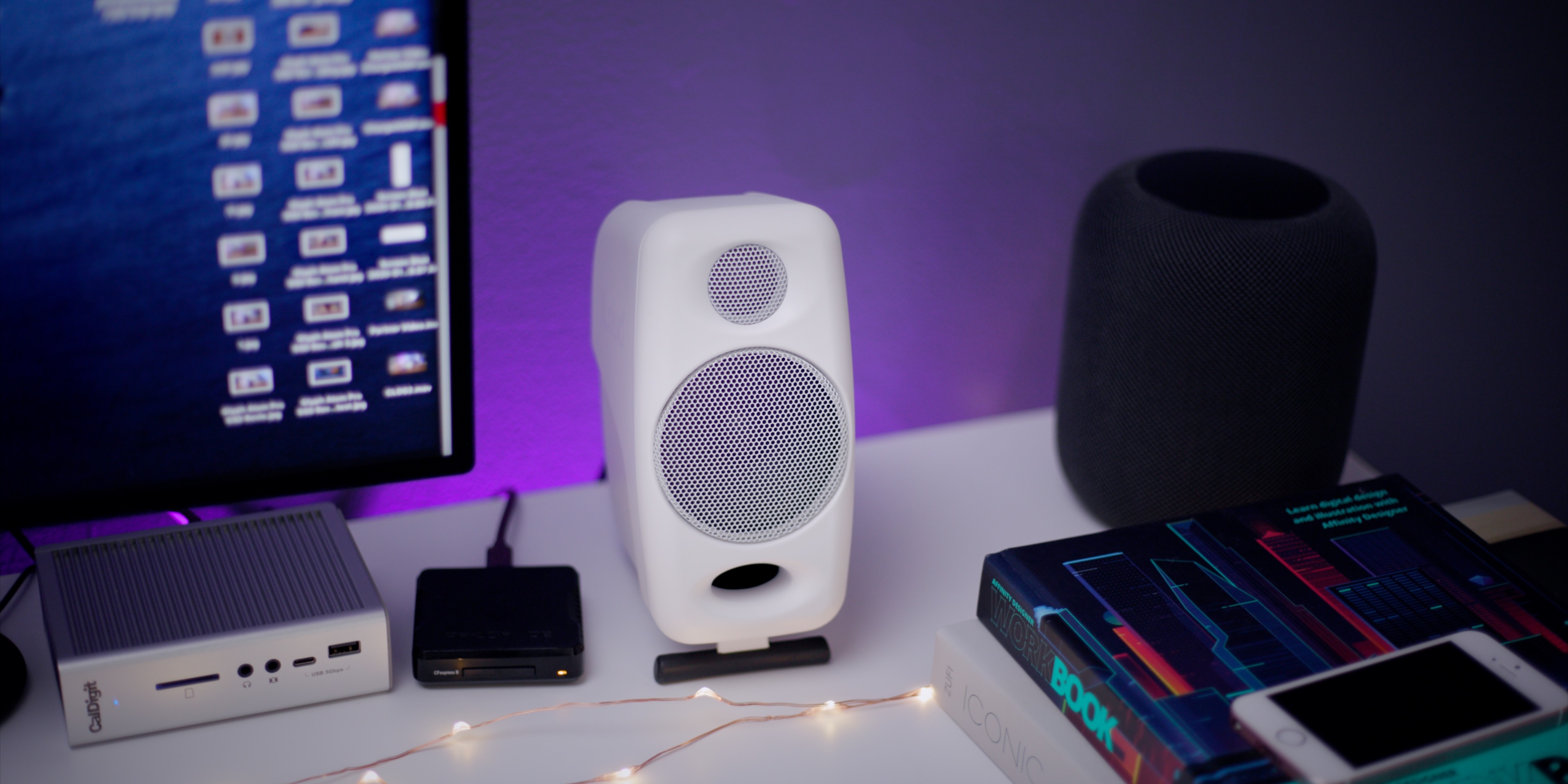 The iLoud Micro Monitors produce accurate sound, and they do a great job of resisting distortion even at high volume levels. I was impressed when the baseline from Alex Lustig’s Skyless came in at the 0:36 second mark, with the Micro Monitors handling it superbly.

Since I don’t usually monitor my audio from desktop monitors, I wanted good sound, but I didn’t want to add a pair of hulking speakers to my desktop. The Micro Monitors present a good compromise, being small enough to fit easily on my desktop while sounding good enough to be worthy of a spot in the first place. Plus I think they look pretty good when paired with the Pro Display XDR. What do you guys think?

Because the Mac Pro is on the floor, and the Pro Display XDR outright lacks the ability to daisy chain with Thunderbolt 3, I think that a Thunderbolt 3 dock is a must-have for such a setup. A dock like the CalDigit TS3 Plus (review) allows for quick access to a wealth of different I/O options right from the comforts of your desktop. 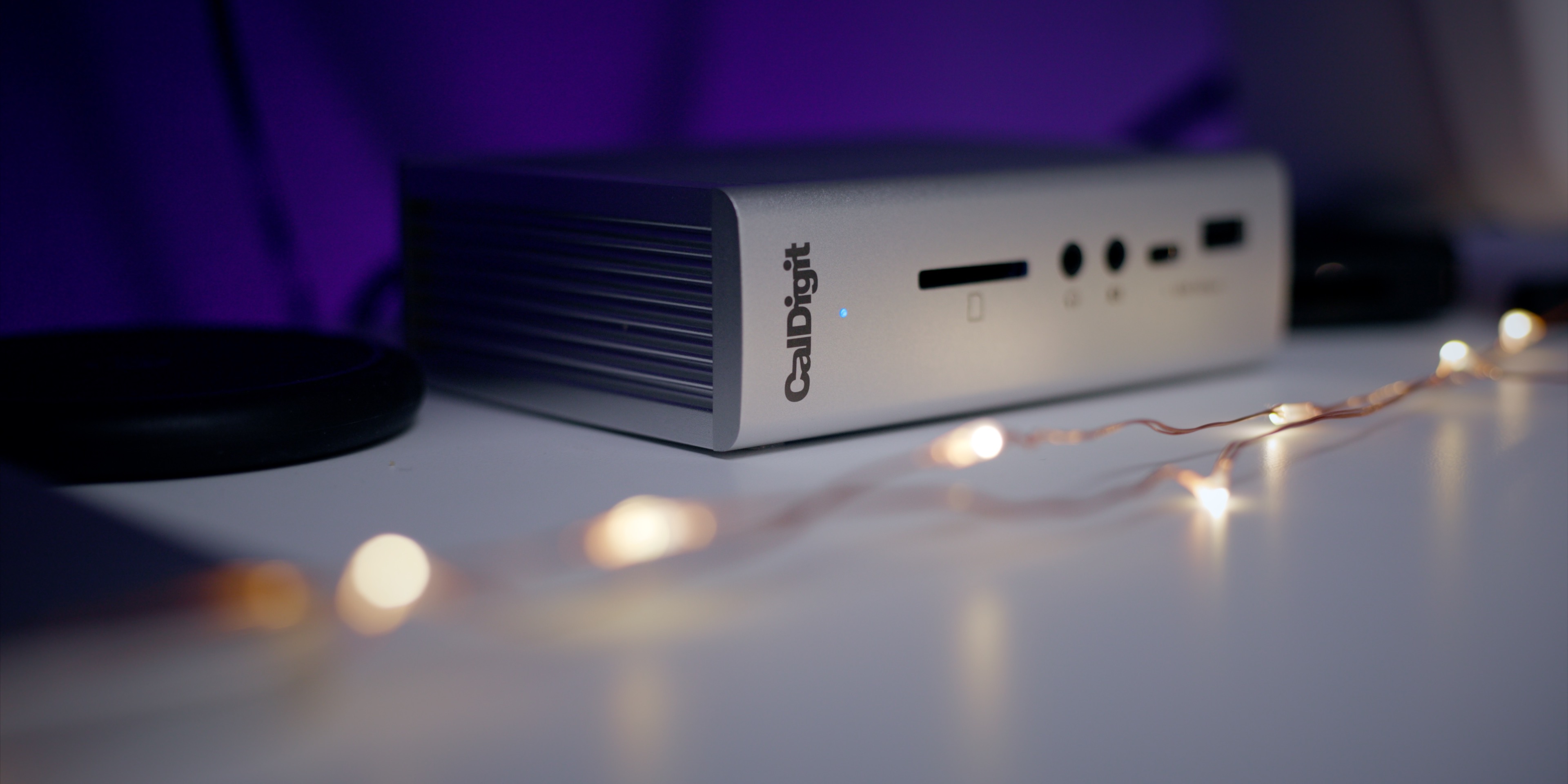 Even years after its debut, the TS3 Plus remains one of the best Thunderbolt 3 dock options available. I do, however, wish that dock manufactures would design a dock more geared towards the needs of Mac Pro users.

I’d gone 7 years with a run-of-the-mill chair from Office Depot before I finally decided to invest in my health and purchase a decent chair. I can’t believe I waited this long for something so fundamentally necessary. 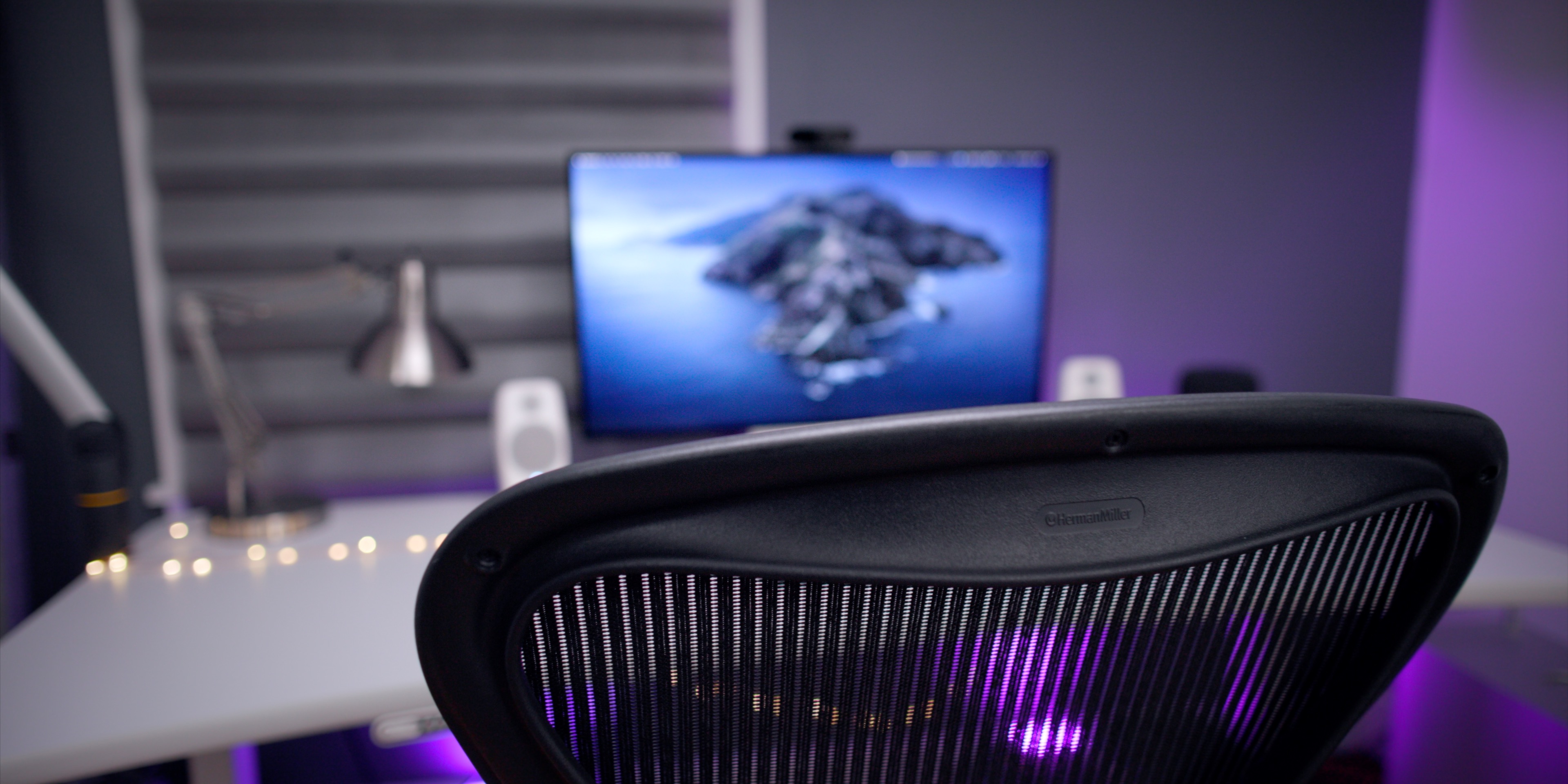 With all of the tech that passes through my hands year in and year out, tech that’s here today and gone tomorrow, I find that it was downright irresponsible of me to let my body languish in a chair that provided such terrible ergonomic support.

Depending on the subject, editing sessions can take hours or days, especially if you’re meticulous about the details. Sitting in a bad chair can make a big difference on your overall comfort, which can lead to crankiness, low productivity, and other negative side effects. 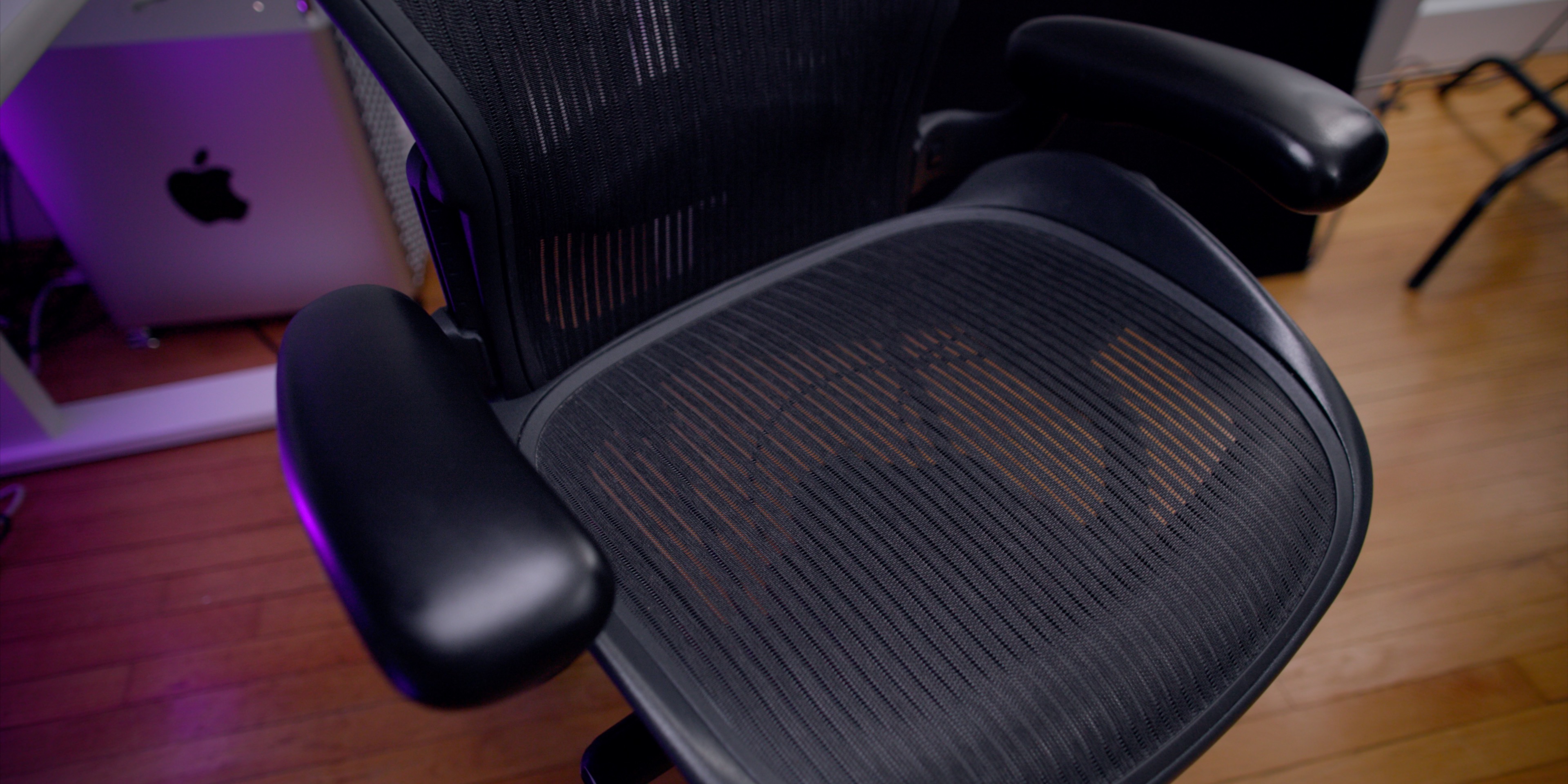 I purchased a used Herman Miller Aeron from eBay, and it’s probably the item that I value the most over every other product on this list. That’s because it’s made such a difference in how I feel after a long day of sitting. 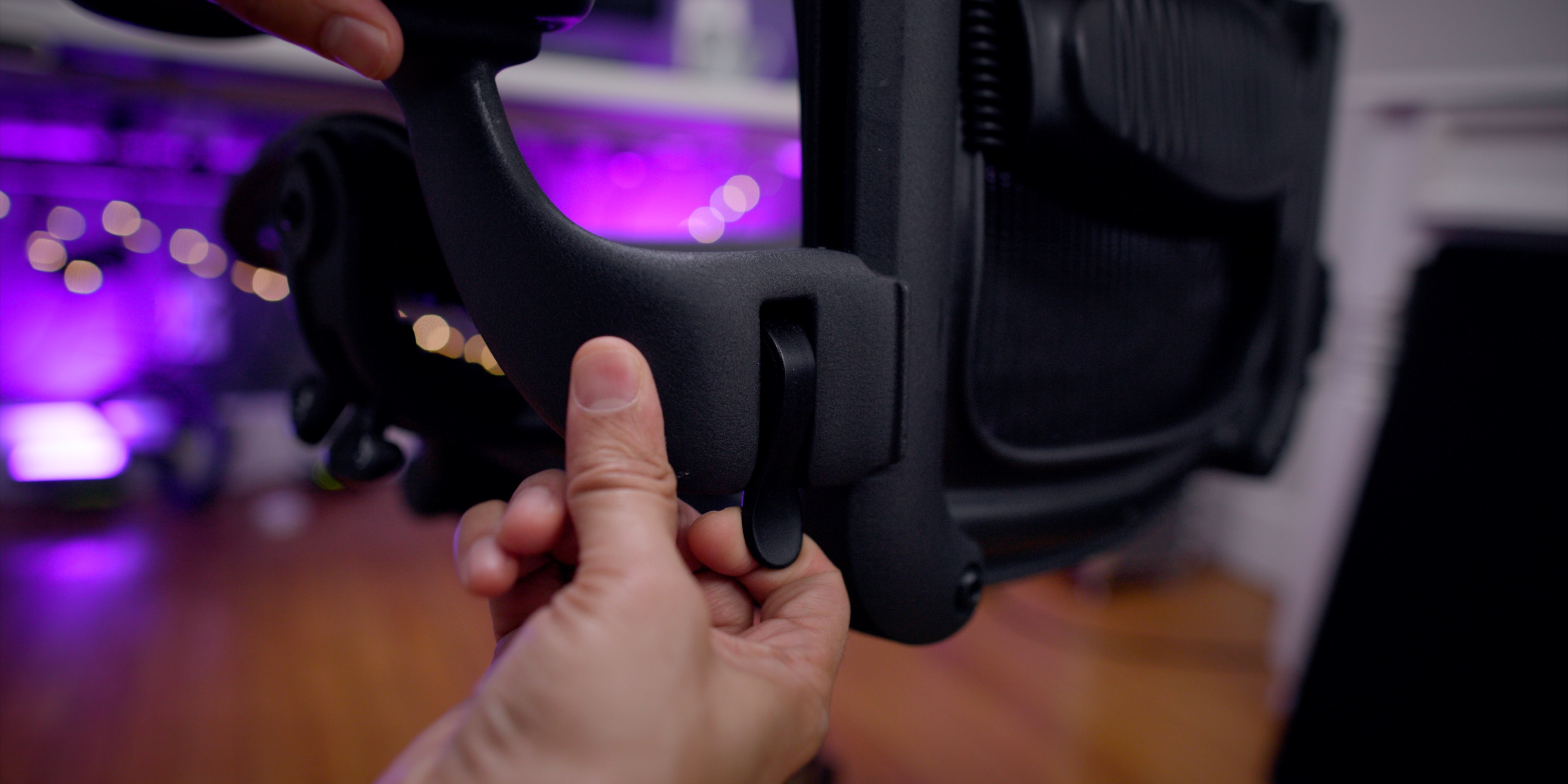 If you’re on the fence, just get it. You can get a used Aeron off eBay for less than half of what one costs new, and it will last you a very long time. 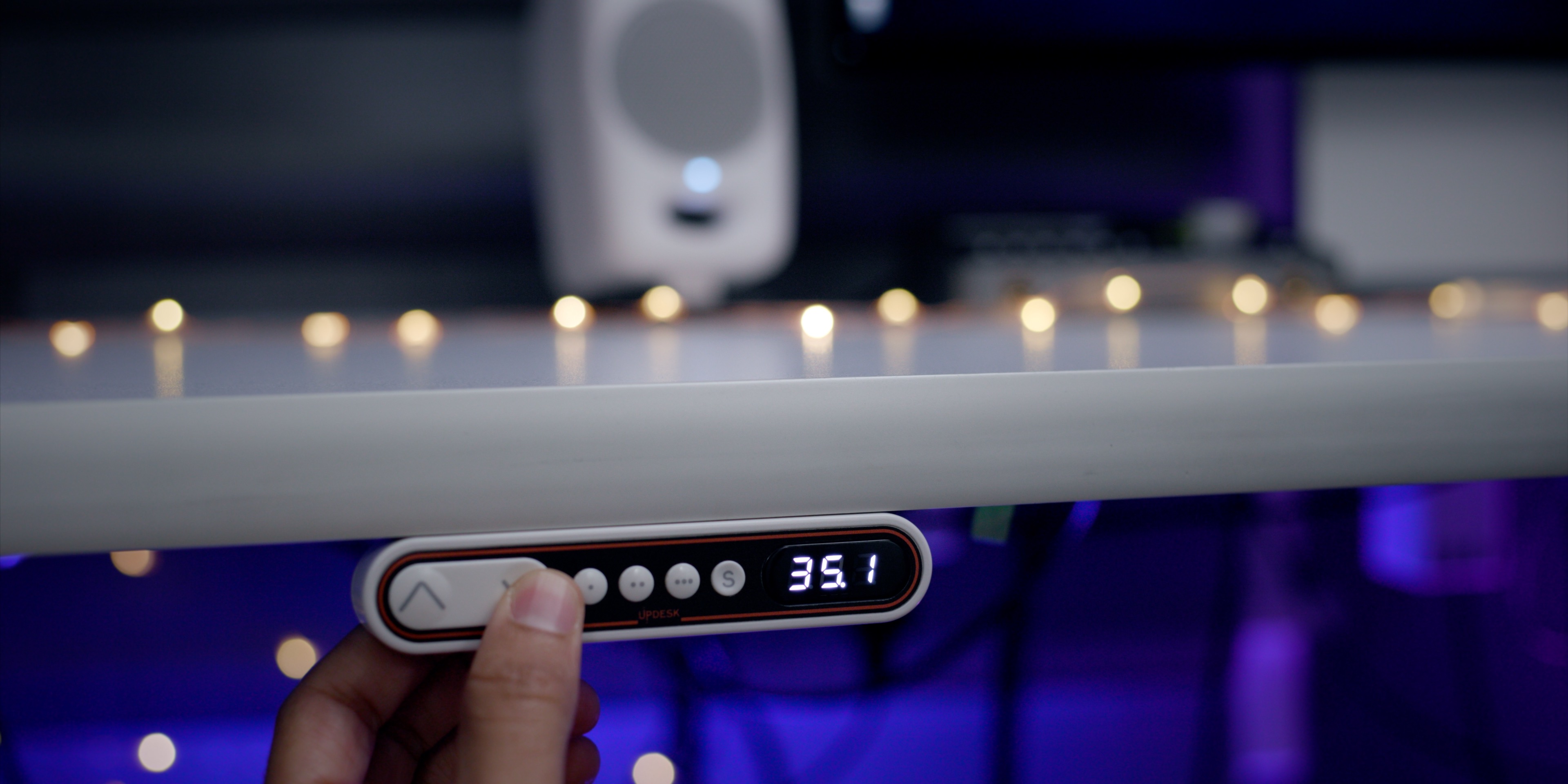 Unlike the Aeron, I adopted the UpDesk standing desk (hands-on) early on, and I’m happy I did. I don’t use the desk in stand mode as much as I should, (once I adopt better cord organization, I plan to start using the standing functionality more regularly) but I notice that I feel more productive when I’ve added some standing into my daily work pattern.

I use the following software each and every day when making videos:

Of course, the Mac Pro can easily run all of these applications simultaneously. I’ll be back with an overview of the key software that I use to make videos in a follow-up walkthrough. 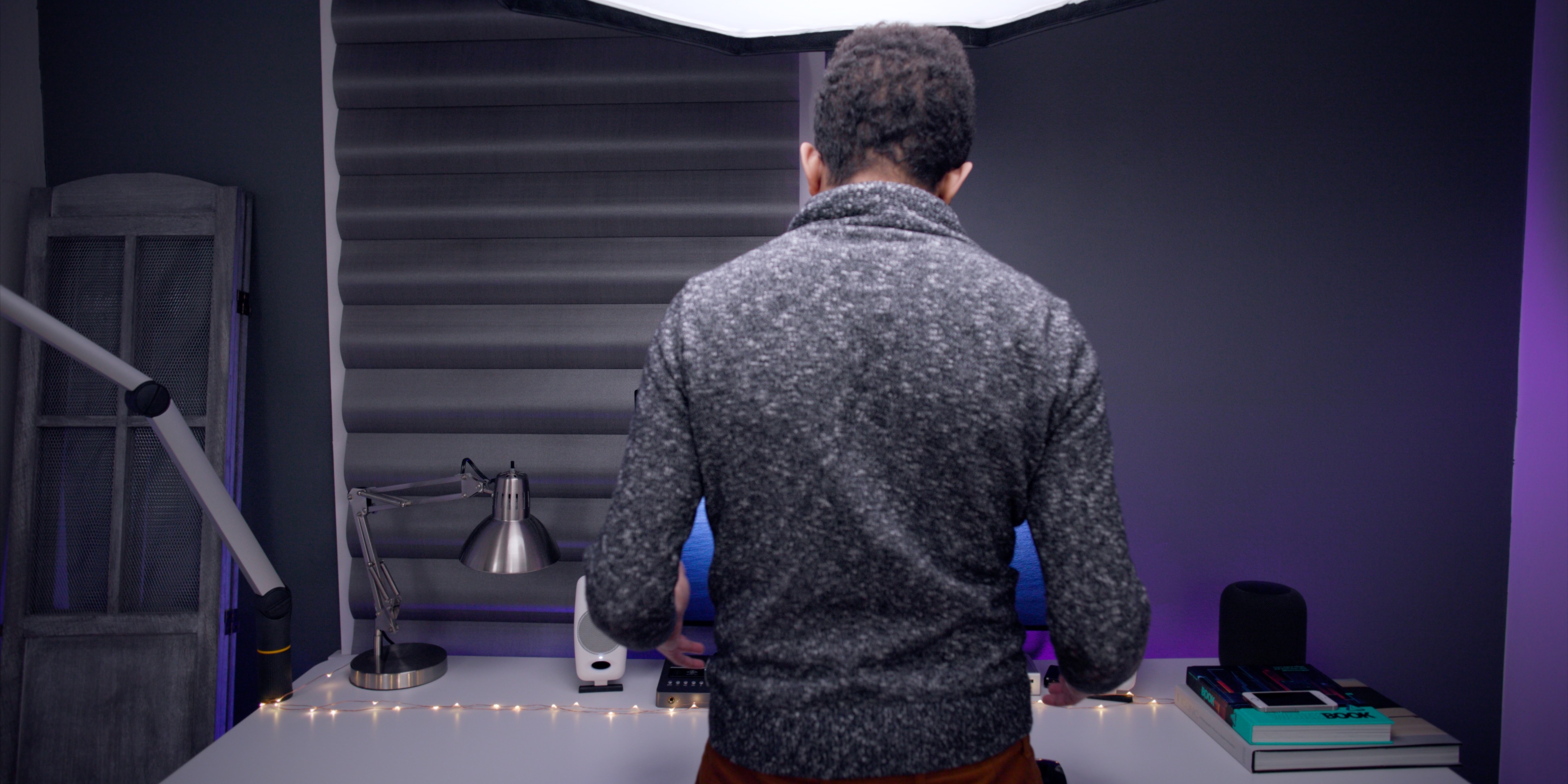 If there is a demand for it, I’ll provide a post going over the cameras I use, my camera mounting and capture setups, and the techniques and tools that I use when actually behind the camera.

What do you guys and gals think about my video editing workspace? Do you have any questions, observations, comments, or suggestions? Let me know down below with your thoughts and opinions.

Final Cut Pro X Back to the Mac