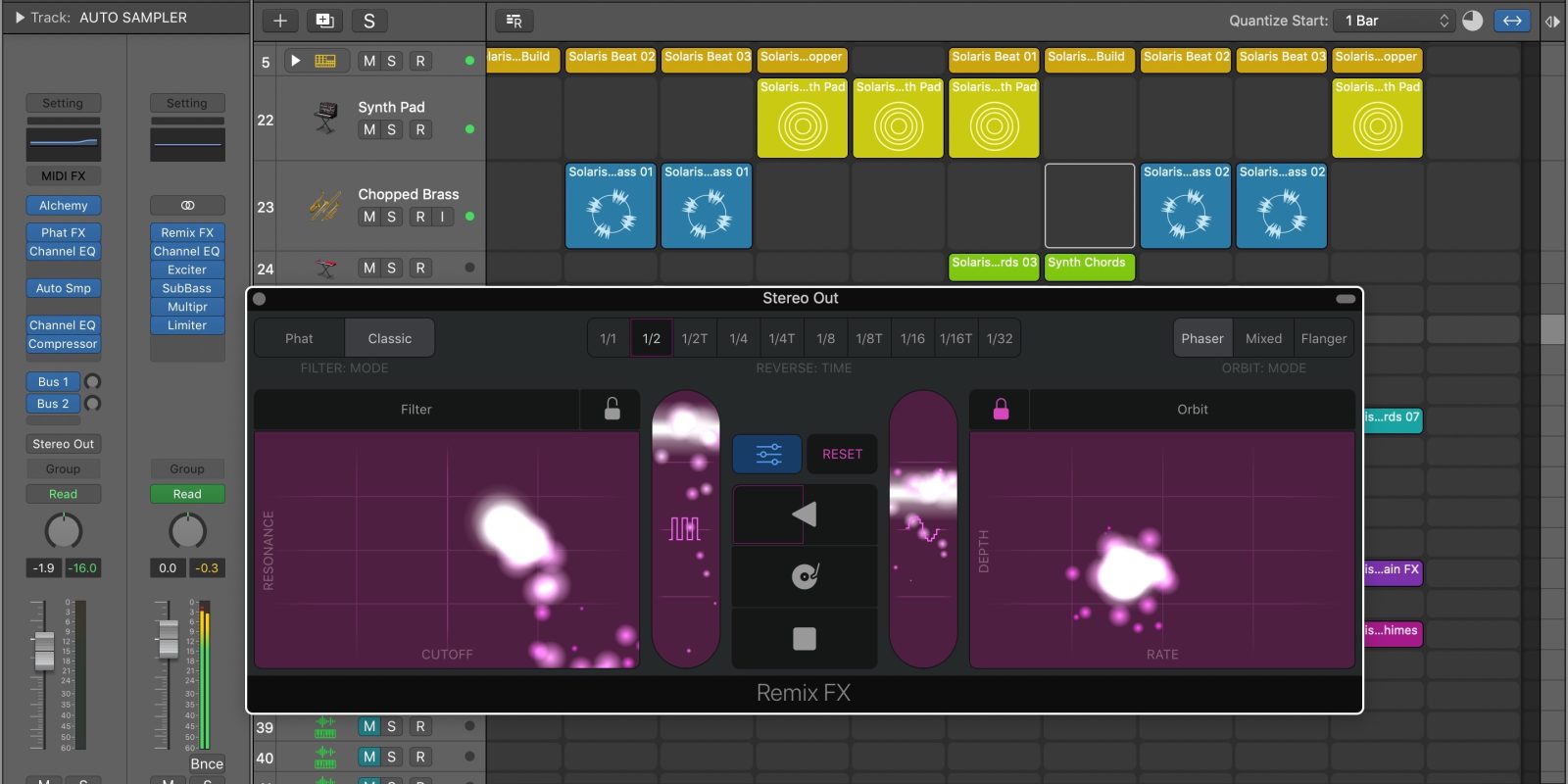 Now housed inside Logic Pro X, the Remix FX plug-in brings more than just a few DJ tricks to Apple’s flagship production suite. To some degree overshadowed by the influx of game-changing new tools and technologies that hit Logic Pro X with the 10.5 update, the multi-FX, touch control plug-in rig can be a particularly useful and creative production tool that only enhances new powerhouse additions like Sampler and Live Loops. Below we are exploring its capabilities and how Logic Pro X users can take advantage of the immersive touch-based musical performance surface.

While the Remix FX experience might be a familiar one to avid GarageBand users and iOS producers, it might not be for Logic Pro X lifers. It also might look like a throwaway bundle of basic effects, all but useful and only for a select group of EDM DJs. It’s not. It’s actually a particularly good, if not predictable and to-the-point, real-time FX rig, that can also be quite handy in a wide variety of musical genres from pop, EDM, chill music, and hip-hop, to just about anything that isn’t aimed at being an entirely and particularly organic experience for the listener. So let’s dive in and take a closer look.

Remix FX is a multi-FX plug-in with a collection of large, touchable controls made up of sliders, parameter buttons, and touchpads. From filters and echoes to wild modulating flourishes and beat stutters, it houses a menagerie of creative FX that can be applied to your tracks in various ways. It loads up like any other plug-in and is now bundled inside the Multi Effect folder that was added in 2018 with Phat FX and Step FX (the imagery in this post sometimes shows the new Remix FX in a custom plug-in location).

Ideal for adding some finishing touch effects on your master output, Remix FX can also be instantiated on individual instruments, Aux track subgroups, and more. Along with the obvious DJ-style touches on an entire song, I have found it to be particularly useful on individual instruments as well. It is great for taking an individual loop from cool to even more interesting, and then for injecting dynamics and crescendos to add life across an entire arrangement, for example.

It has a more typical filter, a sort of wobbly filter with some movement to it, the Orbit effect (a modulating flanger and phaser combo), stuttering Repeater effects, reverb, delay, the Gater, and more — each with one or more customizable parameters like a color setting on the reverb, filter types, etc.

The main idea here is that we can swipe our mouse across the Remix FX interface’s controls to trigger creative effects in our music, with the ability to record all of these moves using Logic Pro X’s intuitive automation system or in Live Loops performance recordings.

But with Logic Remote integration, we can also get particularly hands-on with these performances and FX flourishes. Connecting an iOS device to your Logic Pro X system with Apple’s remote app allows for multi-touch performance directly on the Remix FX plug-in interface just like in GarageBand for iPad. Combined with Logic Pro X’s automation system, it’s a particularly streamlined example of an all-in-one FX rig with solid multi-touch control. And one that is directly built-into Logic Pro X for no additional charge, via a touch device you most likely already own.

The symmetrical Remix FX interface is an easy one to understand. It essentially breaks down the various FX controls into three sections: Sliders, Buttons, and the two XY Pads. The two vertical sliders — Gater and Downsampler — remain as such much like the Reverse, Scratch, and Tape Stop dual trigger buttons in between them. Those two XY Pads surrounding them, however, are configurable to various FX via the menus atop — Filter, Repeater, Wobble, Reverb, Orbit, and Delay. You can’t have the same FX type chosen on both X/Y pads.

Accessing the customizable parameters for each of the FX here is particularly simple and well designed. A single-click on the Settings button (in between the Sliders and just to the left of the Reset button), will reveal a sort of top layer to the Remix FX interface. From here we can adjust all of the various settings for each of the FX loaded on the Sliders, Buttons, and XY Pads.

X/Y Pad FX settings appear directly above the pads themselves and vary based upon the FX you have chosen for that pad. With the Filter effect chosen, for example, you’ll see the option for a 24 db lowpass/highpass Phat filter or a Classic 12 dB/octave state-variable filter type. The Delay effect has time division options, the Reverb offers Dark, Medium, Bright color or frequency/ambience variations, etc.

The settings for the Sliders (Gater and Downsampler) and Reverse, Scratch, and Tape Stop buttons will appear along the middle of the top layer as you click on them. You’ll find parameters for each of them including everything from timing and note division options, to the various Downsampler types. One thing to point out here for new Remix FX users is that each of the three Reverse, Scratch, and Tape Stop buttons are dual-purpose, with a different timing setting available for the left and right side of the clickable area.

The X/Y Pad FX Lock buttons allow you to freeze the effects your applying with your mouse or touch gestures. If the lock icon is engaged, the effect will freeze in its last active state (the settings it is left at when you take your mouse pointer or finger off the pad). This engaged or frozen state will remain until you unlock the pad by toggling the Lock icon again or by using the Reset button housed in-between the main sliders.

One thing that might not be entirely apparent here, is that you can actually chain together frozen XY Pads settings. You can lock an XY Pad’s settings on the Filter effect, for example, and then change that same XY Pad over to say a Reverb and begin to make adjustments while the locked Filter setting remains. This can be done over and over again to great, sometimes insane, and other times particularly interesting results. It is important to remember that while this ability to chain frozen FX parameter settings together is possible across both pads, you still cannot load the same effect upon both XY Pads.

How to Record Remix FX

Recording your Remix FX performances is quite simple as well. Just pop the track with Remix FX loaded up on it into one of the recordable automation modes (Touch, Latch, or Write) to ready Logic for your incoming touch/mouse pointer moves. Then push play on your song and perform your FX. When you’re done, just switch the track’s automation setting to Read mode and watch the X/Y pad particles fly. You can also record your Remix FX moves in combination with Live Loops arrangement recordings, a process we detailed in the recording section of our Live Loops feature.

It would have been interesting to see a sort of buffer-like system implemented into the Remix FX gone pro here — something similar to the tech used in those multi-FX glitch plug-ins like the wonderful Looperator that allows the FX settings and parameter motion to be sequenced. But the real focus and power of Remix FX seem to be centered around user performance and the ability to implement these creative FX flourishes into tracks and songs with a more human touch — the Logic Remote linkup being a good example here. While it would have been nice to see an influx of additional effect types and maybe even deeper parameter options therein, what once seemed like a fun finisher toy with rare practical application outside of dance music, has all the sudden become a notably useful creative tool in my musical production tool kit. While I admittedly have never been overly drawn in by the mobile rigs that were already making use of Remix FX anyway, its promotion to Logic Pro X’s plug-in library further highlights its value through the lens of professional audio projects in a world-class desktop DAW.