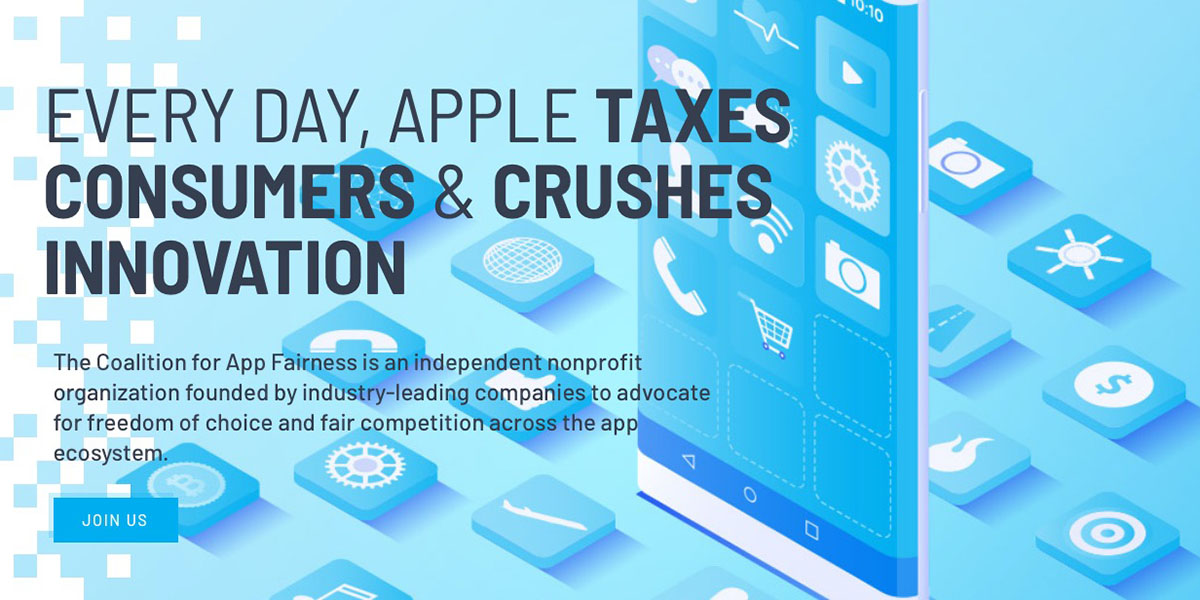 A number of big developers who object to Apple’s App Store policies have jointly formed the Coalition for App Fairness, a non-profit intended to coordinate efforts to do battle with Apple. Founding members include Epic Games, Spotify and Tile, each of which is involved in high-profile disputes with the iPhone maker.

Founding members are listed as:

It claims that Apple makes $15B a year from app commissions, and contrasts the 30% cut with the 5% maximum charged by payment providers. Apple would, of course, argue that it does much more than a payment provider: hosting apps, meeting all delivery costs and marketing apps to consumers. The iPhone maker would also point out that it created the platform that enabled developers to sell to its customers.

The organization is inviting developers of all sizes to join, and says that the only requirement is you have at least one app in the App Store.

This is an open call to all developers, big and small, to join us – and together we will fight back against the monopolist control of the app ecosystem by Apple.

It says it was established to tackle three issues: anti-competitive policies, Apple’s 30% commission and no alternative app source for consumers.

Carefully Crafted Anti-Competitive Policies. Apple uses its control of the iOS operating system to favor itself by controlling the products and features that are available to consumers. The company requires equipment manufacturers to limit options, forces developers tO sell through its App Store, and even steals ideas from competitors.

30% “App Tax” on Creators & Consumers. For most purchases made within the App Store, Apple takes 30% of the purchase price. No other transaction fee -in any industry comes close. This app tax cuts deeply into consumer purchasing power and developer revenue. This app tax is especially unfair when it is imposed on apps that compete directly with those sold by Apple, driving up their prices and putting them at a distinct competitive advantage.

No Consumer Freedom. If consumers want to use a modern mobile device, Apple levies a tax that no one can avoid. No competition, no options, no recourse. The Apple App Store policies are prisons that consumers are required to pay for and that developers cannot escape.

The coalition then expands on this with 10 principles it believes should apply to any app store.

There is already an existing organization with a similar name and objective: the App Coalition, formed back in April. My guess would be that the developers behind the Coalition for App Fairness want to ensure that they have control of the agenda.