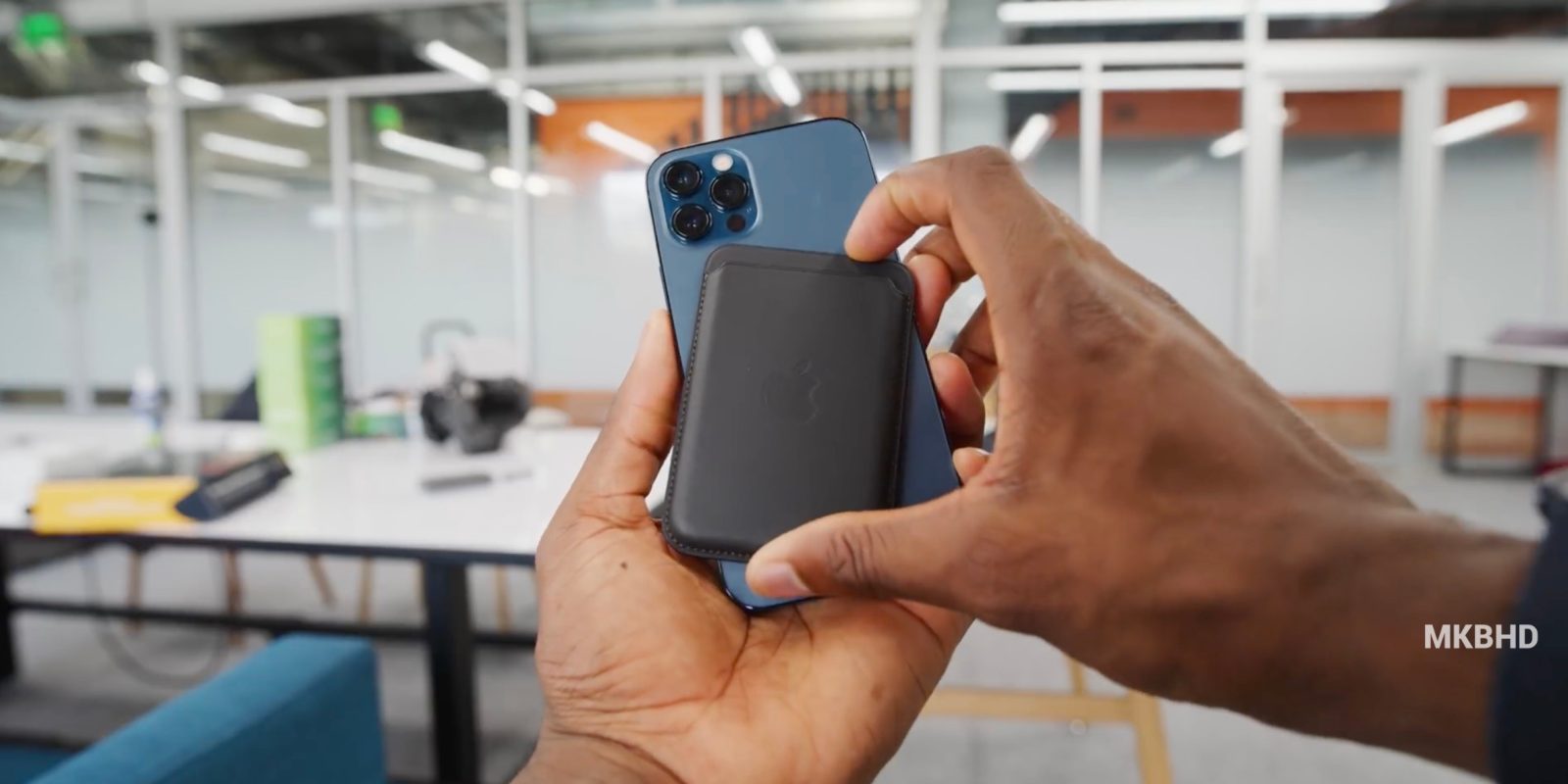 One of the more interesting first-party products for Apple’s MagSafe system is the Leather Wallet that attaches either directly to your iPhone 12 or to MagSafe compatible cases. However, the first reviews are detailing what looks like a relatively weak magnetic connection. Meanwhile, shipping times have been delayed for those who preordered the MagSafe Leather Wallet as soon as it became available.

Reviews of the iPhone 12 and 12 Pro landed today ahead of the devices arriving to early buyers on Friday, October 23. Apple also gave early reviewers some of the first MagSafe accessories like the MagSafe Charger and the MagSafe Leather Wallet. Unfortunately, it’s looking like the connection between the wallet and iPhone won’t be very strong and the wallet seems to easily pop off.

Many of the first iPhone 12 reviews didn’t talk much about the MagSafe Leather Wallet but MKBHD went into some helpful details and a close look at it in his video review. At the 10:17 mark, he shows how easy it falls off the iPhone when sliding the device into his pocket.

But even look at this, this is the wallet mount, which you’d really want to stay attached. But even with this wallet case, putting it in my pocket it can easily just pop right off, just slide right off. And that’s your wallet. That’s like the one thing that you definitely want to for sure stick to the phone the strongest. So we’ll see, we’ll see what this ecosystem brings.

And when you connect it, it just kind of snaps onto the back in place. Again, somewhat firmly, but not super strong.

Engadget’s Chris Velazco didn’t go into the same detail as MKBHD, but he did say this about the MagSafe Leather Wallet at the 5:01 mark:

And I gotta tell ya, it seems like one of those ideas that is just better on paper than in practice. In pulling it out of my pocket it’s already popped off a few times.

From early reviews so far, it seems like the wallet has a notably less strong magnetic connection than the MagSafe Charger. That could be because Apple has shielded the magnets in the Leather Wallet to keep it safe for use with credit cards.

Rene Ritchie also shared you should only expect to get 3 cards in (normal thickness) or 4 tops if they’re thin at timestamp 34:48:

The Verge’s Dieter Bohn also echoed how easily the MagSafe Wallet falls off, 3-4 card max capacity and mentioned that you have to remove it from your iPhone 12 to get cards out.

Another interesting development around the MagSafe Leather Wallet is shipping delays. Several of us here at 9to5Mac ordered the wallet immediately after they went up for preorder at 5 am PT on October 19. We noticed shipping estimates of November 2 at the earliest. However, now that has been pushed back to November 23.

Update 10/23: Two of us here at 9to5Mac have seen our MagSafe Leather Wallet shipping times return to the November 2 arrival date (one black, one saddle brown).

We’re seeing others reporting the same and one 9to5Mac reader Kyle heard this explanation from an Apple support rep on what’s going on:

I ordered mine within 5 min on launch morning and my order email confirmation said 2-3 weeks delivery (Nov. 3-10). Now when I login to view my order online it shows Nov. 24-Dec 2 delivery which is the ETA
if you order right now. Spoke with Apple Online Store support and they told me there was a glitch during launch day that caused the system to record the right product, but wrong SKU and then they had to fix some stuff in the backend to correct a bunch of orders, causing delays. Sucks.

One of us also had the entire order of MagSafe accessories canceled that included the Leather Wallet. So it appears there are definitely some issues with Apple’s logistics here. Also, Apple’s MagSafe Leather Case for iPhone 12 will become available on November 6. And the new Leather Sleeve will land sometime later in November.

How about you? Do the first look videos at the MagSafe Leather Wallet make you unsure about wanting or keeping your order? And have you seen shipping delays after you original estimate? Share your thoughts in the comments below!