Opinion: The 2018 iPad Pro was one of the most future-proof computers ever made 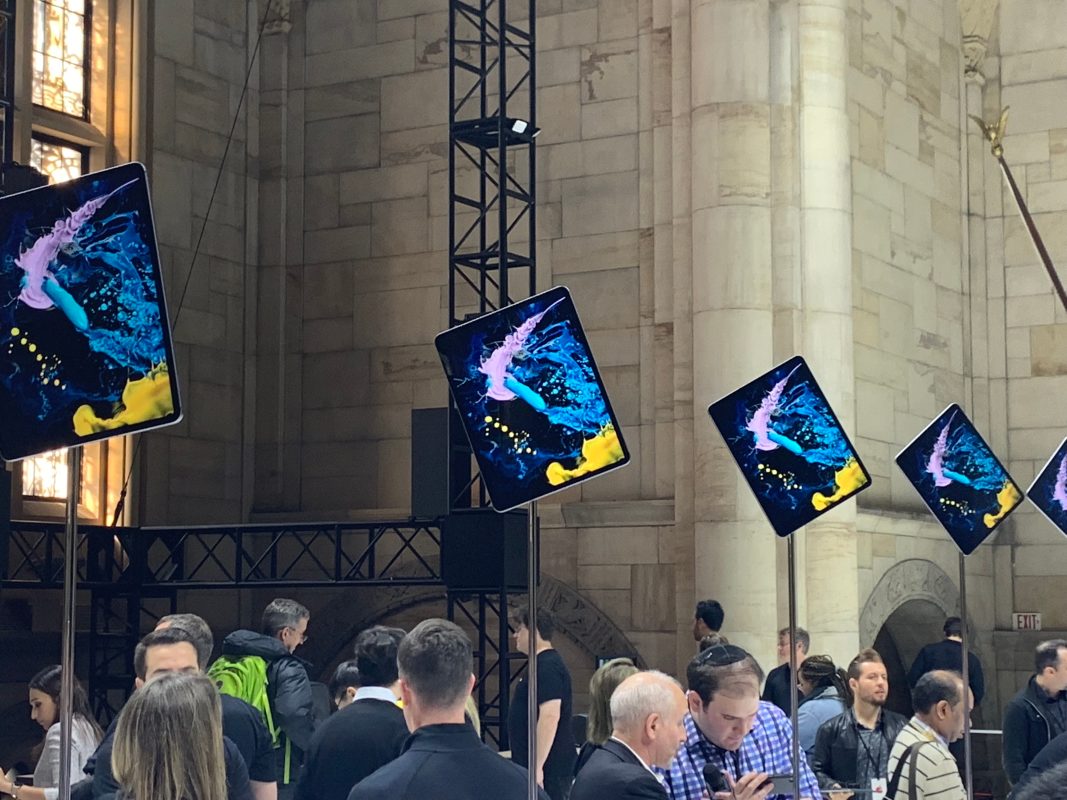 Rumors have been swirling for a long time about the next-generation iPad Pro. Just a few weeks ago, Bloomberg reported that the 2021 iPad Pros will maintain the same design but gain new technologies, like an A14X chip and a Thunderbolt port. It’s slated to be a much more significant upgrade than last year’s 2020 iPad Pro was over the 2018 model. Many users, including me, couldn’t find a reason to upgrade last year, and I’m struggling with the idea that this year’s model won’t yield the same situation.

The 2020 iPad Pro is barely any different from the 2018 model. It gained a secondary camera, a LiDAR sensor and enabled a hidden GPU core. The real star of the show was the Magic Keyboard. Apple’s decision to make the Magic Keyboard compatible with the 2018 iPad Pro didn’t help the situation.

Apple knew back in 2018 that the introduction of those iPad Pros was a big deal. They went all out with a huge event in Brooklyn, New York. The company took over Downtown Brooklyn in the blocks around the Apple Store. They had some of the coolest promotional artwork plastered on the Brooklyn Academy of Music, different artistic interpretations of the Apple logo on flags hanging above the building that would hold the hands-on area, and even decorated the logo atop the Downtown Brooklyn Apple Store. Whatever was coming, it was clear at the time that it was going to be big.

It’s been two years and five months since the 2018 iPad Pro was released, and it has shown no signs of slowing down or aging. The A12X processor in the 2018 iPad Pro has proven itself to be so powerful that it feels as fast and as efficient as even the newest M1 Macs. The 3rd generation 12.9” iPad Pro still ranks as the highest multi-core performer on Geekbench, ahead of any other iOS device ever released.

It ranks even higher in multi-core performance than the new iPad Air with its state-of-the-art A14 chip. The regular A14 chip does beat out the A12X in single core and metal performance tests but doesn’t surpass it so much that it makes a tangible difference in day-to-day use. The A14X chip is sure to be a beast though, as it’s expected to mirror the performance of the M1 chip used in Apple’s newest MacBooks. Gamers will surely benefit from the increased performance, but power users won’t need to upgrade right away. If anything the real benefit from the A14X chip will likely be better battery life. If it matches that of the M1 MacBook Air, it could be the longest-lasting iPad ever made.

At the end of the day, using a new processor as justification to upgrade isn’t really a great idea when it comes to Apple Silicon. Apple’s chips last for a very long time, and their most recent chips are still incredibly performant. If you’ve got an iPad Pro from 2018, you know that the A12X chip is no slouch even with iPadOS 14. That could certainly change if iPadOS 15 is a major release with serious structural changes, but even then, I suspect the A12X still has a lot more life left in it.

The display on the 2018 iPad Pro is one of the best Apple has ever shipped. When the Liquid Retina display debuted in September 2018 on the iPhone XR, I was excited about it because it was clear that it was the technology that would make it to the iPad. Sure enough, a month later, Apple introduced the iPad Pro with Liquid Retina display. It’s a triumph — no iPad display has ever been remotely as good as the one on the 2018 and 2020 iPad Pros. The true-to-life color combined with ProMotion made the display one that will last for years. There’s simply no other tablet with a display that comes close.

Soon, though, there might finally be a display on a tablet that beats out the 2018 iPad Pros, and it’ll be the 2021 12.9” iPad Pro. The fifth-generation 12.9” iPad Pro is widely believed to be adopting a Mini LED display. This would mark the first time Apple has ever used the technology in a flagship product. The benefits of the OLED-like technology include things like increased brightness and darker blacks. If there is any complaint to be made about the current iPad Pro’s display, it’s that the blacks need to be darker like they are on iPhones with OLED displays. Dark mode users will know exactly what I’m talking about.

The thing is, though, the changes coming with the fifth-generation 12.9” iPad Pro’s display are mostly subjective. Lots of consumers simply don’t care about the quality of their device’s display in 2021. Most products that ship nowadays have good displays, and Apple in particular is not known to ship bad ones. Consumers just want great displays, and the 2018 and 2020 iPad Pros have the best tablet displays yet.

The addition of USB-C helped turn the iPad Pro into a real computer. It made it infinitely easier to connect it to an external display or external storage. The Magic Keyboard added a second USB-C port for charging, freeing up the built-in one for other use cases.

The next iPad Pro is expected to gain Thunderbolt support, which should enable faster data transfers and allow users to power higher caliber displays like Pro Display XDR at full resolution. Both of these additions would be great to have, but they aren’t good reasons to upgrade.

The 2018 iPad Pro launched with iOS 12. It didn’t really include any major changes for the iPad, and Apple tried to make up for that with the introduction of iPadOS 13 a year later. With the launch of the 2020 revision of the iPad Pro, Apple released iPadOS 13.4, which added true trackpad and mouse support. It was arguably the biggest iPad update in years jammed into a point release. iPadOS 14 added a few important updates to the iPad experience, like system-wide scribble, but nothing that really pushed the envelope.

Long story short, the 2018 iPad Pro hasn’t had a single issue with software releases. Lots of gadgets slow down a bit with every release, but this iPad Pro has stayed as fast as it’s ever been. This is likely because Apple hasn’t really pushed iPadOS very far. It’s seen incremental changes rather than foundational changes that take advantage of the horsepower inside that ultra-thin case.

Apple’s iPad designs tend to last for a very long time. The iPad 2’s design lasted for three generations, and the original iPad mini’s design has lasted for nearly eight years. When Apple unveiled the edge-to-edge display and square edge design, it was a safe bet to assume that it was going to stick around for a long time. The 2020 iPad Pro looks virtually identical to the 2018 model, aside from the bigger camera bump. The 2020 iPad Air maintains the same design as well, albeit in a variety of new colors.

It’s a beautiful design that Apple has chosen to extend in some form to the iPhone 12 family. The entire case is incredibly thin and light, even on the 12.9″ models. The bezels aren’t too thin and aren’t too thick. All of the buttons are solid. The speakers sound incredible. And even the single camera on the 2018 model still works like a charm.

Apple’s rumored 2021 iPad Pro is going to maintain the same design as that 2020 iPad Pro. It’ll more than likely have the same bezels, the same speaker designs, the same camera positioning, the same smart connector, and more. So if design is your primary reason for hardware upgrades, this won’t be it.

The second-generation Apple Pencil still reigns supreme among digital styluses. It’s fluid and accurate. It clicks right to the side of the iPad Pro. There are virtually no problems with it. The 2018 iPad Pro and the 2020 iPad Pro both utilize the same pencil. There’s likely not that much different about the third-generation Apple Pencil that is rumored to be on the horizon.

The real star of the accessory show is the Magic Keyboard. Apple released it alongside the 2020 iPad Pros but decided to make it compatible with the 2018 iPad Pros. This single decision was the crushing blow to any justification to upgrade to the 2020 models. Apple could be working on a new Magic Keyboard, and if they want to push more people to upgrade their iPad Pro, they need to make it exclusively compatible with the new model. This is certainly a possibility, as the new 12.9″ iPad Pro is rumored to be thicker than the 2018 and 2020 models.

The iPad Pro is one of the best products Apple makes. It has impeccable hardware that could last a decade held back by software that’s desperately in need of a reboot. iPads, in general, last a long time, but when you slap a “Pro” on the end of that name, they last even longer. It’s becoming harder and harder to justify upgrading an iPad on a yearly or even bi-yearly basis.

Have you used a 2018 iPad Pro? Did you upgrade last year or stick with the 2018 models? Are you planning to upgrade to the 2021 models? Let us know in the comments below!