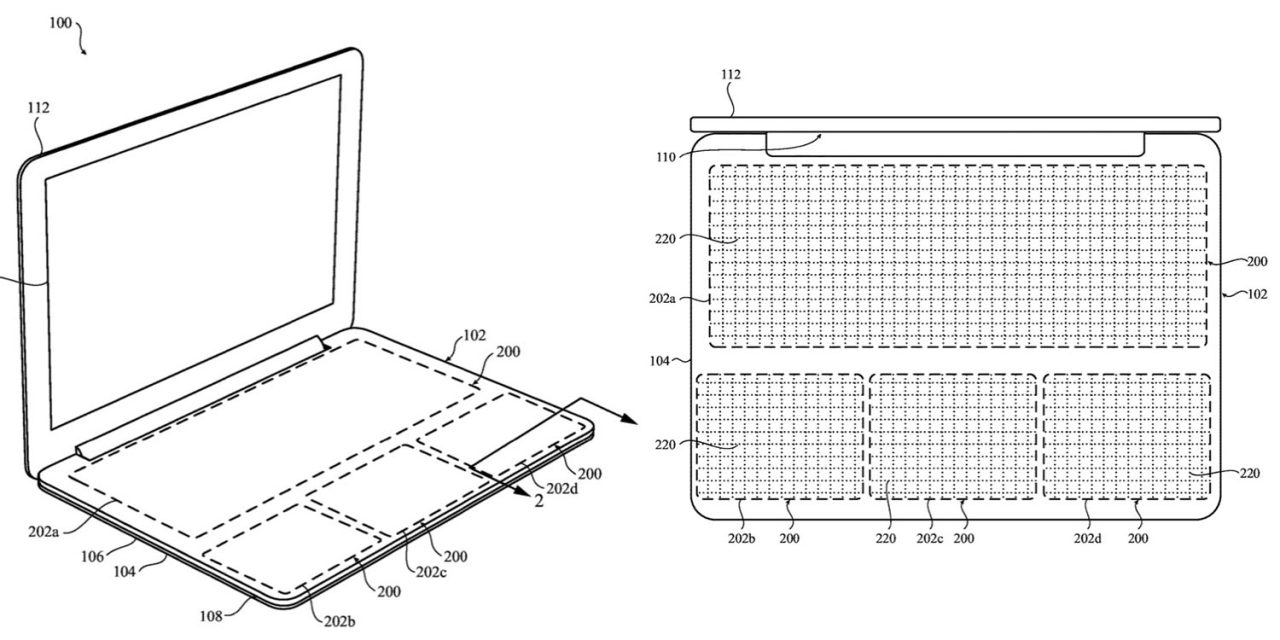 An Apple patent granted today describes a MacBook with a solid-state keyboard using an all-touch surface which can be reconfigured as the user desires.

A user working with numbers might opt for a large numeric keyboard, for example, while an artist might instead choose a large area for drawing …

There is plenty of patent evidence to suggest that Apple’s long-term goal with MacBooks is to replace mechanical keyboards with touch-sensitive surfaces.

There are, of course, lots of barriers to this. An iPad-style keyboard doesn’t permit touch-typing, and extended typing on a glass keyboard is uncomfortable. But Apple does have patents designed to address these issues.

Apple proposes a three-fold approach to making a screen-based keyboard feel like a physical one. First, allowing a flexible screen to deform when a virtual key is pressed. Second, haptic feedback would be used to simulate the click of a real key. Third, an electrostatic charge could also be used to simulate the feeling of the edge of a key, making it feel like a real keyboard when you place your fingers on it ready to type.

The company made its first step in this direction, back in 2015 when it replaced a moving trackpad surface with a Force Touch one, where the clicks are simulated.

While there are significant challenges in making a virtual keyboard feel real, Apple’s patent argues that there are equally substantial benefits.

First, it says, mechanical keyboards are prone to failure, including from debris trapped within them. This was, of course, a major problem with Apple’s butterfly keyboard design, which forced the company to offer out-of-warranty repairs and to subsequently abandon the design.

Second, a solid-state approach offers the ability to tailor the keyboard and trackpad layout to whatever the user is doing at any given time. In some cases, opening a particular app may automatically reconfigure the input devices.

By comparison to a conventional a laptop which may only include a standard “QWERTY” keyboard and a track pad, electronic device having force-sensitive input structure can include a QWERTY keyboard, a track pad, a standalone numeric keypad, a special characters or glyph keypad, and/or enlarged directional keys portion.

While many of us are extremely wary of the idea of replacing a proper moving keyboard, and would prefer to see moving keycaps with dynamically-assigned functions, Apple does acknowledge that it may need to adopt a hybrid approach with actual deformable areas.

Apple doesn’t expect to get there anytime soon, and in the meantime continues to address ways to make proper moving keyboards thinner – another prospect which makes many of us nervous …