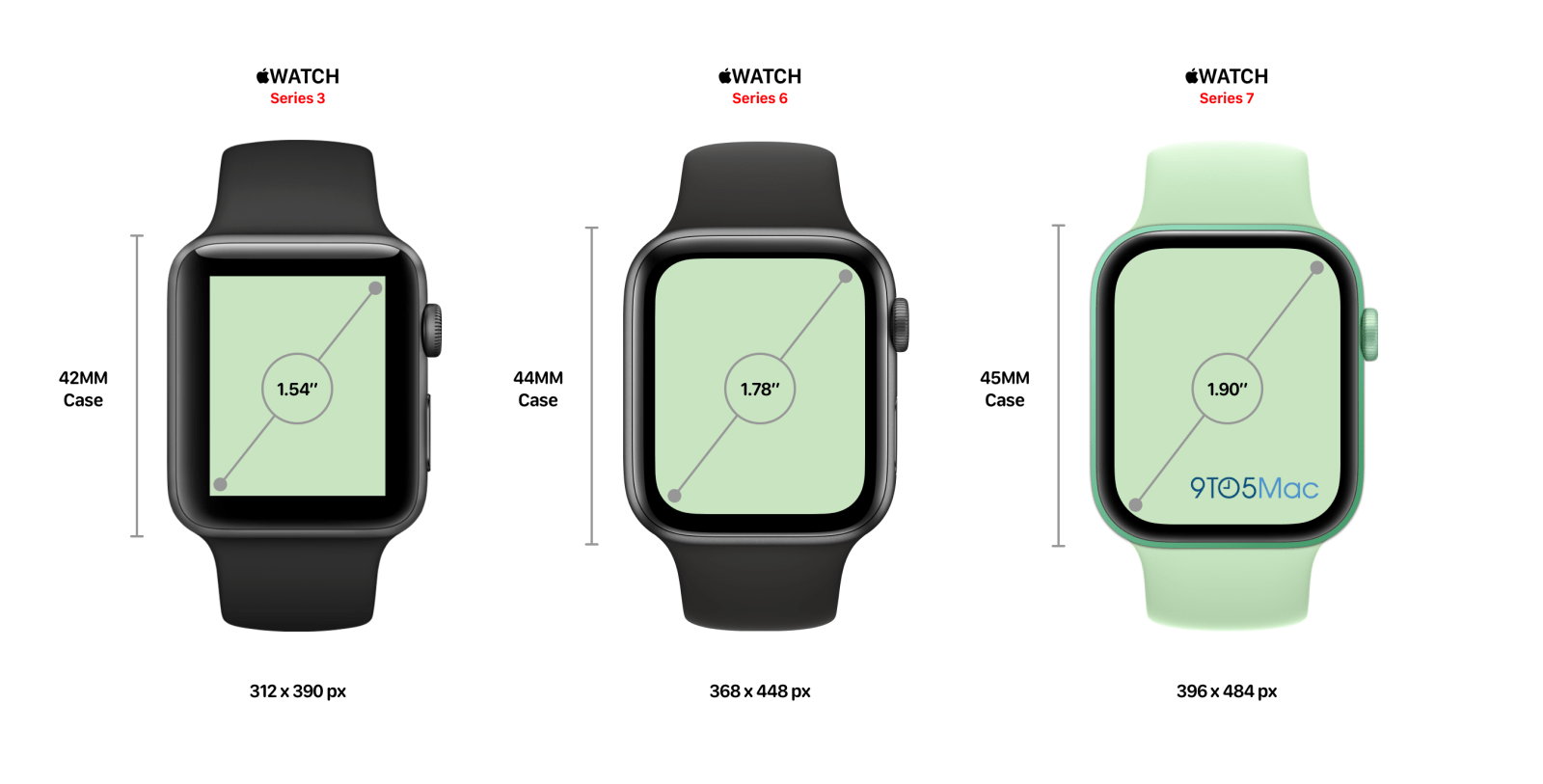 Earlier today Bloomberg reported new details about the upcoming Apple Watch Series 7, including the size of the larger displays. Little was previously known about the next generation Apple Watch aside from it apparently gaining a new flat design reminiscent of the iPhone 12 and iPad Pro. Today we learned about new exclusive watch faces, significantly larger displays, and more.

First off, Bloomberg says that the Apple Watch Series 7 will be offered in two new sizes. This year’s watches are expected to be available in 41mm and 45mm sizes, each taller by a millimeter compared to last year’s Series 6. Coupled with flat edges, I fully expect these watches to feel tangibly bigger on the wrist.

We now know that the display on the 45mm Apple Watch Series 7 will be 396 x 484 pixels and 1.9″ on the diagonal. We can surmise that the bezels of the new watch will be ever so slightly thinner, both because of the new display size and because of the flat edges. You’ll likely not see as much of the watch case from the front with the Series 7.

These same ideas apply to the smaller 41mm Apple Watch as well. The display and case will both be larger on the new model. Although the Bloomberg report doesn’t include the exact resolution and screen size of the 41mm model.

With larger displays also comes new watch faces. Like Apple did when they increased the display sizes with the Series 4, there will also be exclusive new faces for the Series 7. The new faces include: Continuum, Atlas, and Modular Max. The report also mentions updated Nike+ faces that change with motion and Hermès faces that change throughout the day.

Modular Max is set to include two large complication slots, one more than is currently available on the Infograph Modular face. This will enable users to see two rich and detailed complications at once. At the top there will be a slot for a small complication next to the digital clock.

Back during WWDC, the “Atlas” face was revealed through a developer session about working with UIKit. At the time the face was referred to as “World Timer,” which is also mentioned in the report. You can see what that new face would look like on the larger 45mm display on the Series 7 below. Unfortunately the resolution isn’t too high, but you can still see what the face is going to look like.

The other new faces mentioned in the Bloomberg report are quite abstract and much harder to imagine without further details.

A big question that’s currently being asked by existing Apple Watch users is if the watch bands they already own will fit the new designs. We don’t have any information to share, but we fully expect existing bands to still fit the new watches. The size increase of the case is marginal, despite us expecting it to feel larger.

Apple will likely continue to sell the Apple Watch SE, which uses the 40mm and 44mm band sizes. It’s unlikely Apple would split up band compatibility at this juncture. Although I certainly imagine it will happen someday when the watch inevitably undergoes a more radical change.

There’s been chatter that watch band availability has shrunk at Apple Stores leading employees to speculate that bands won’t fit the new watches. The band shortage tends to happen every year around this time. The colors Apple currently offers will go out of style when the next slate of bands are unveiled. It wouldn’t make sense for Apple to continue manufacturing them.

Apple Watch Series 7 is also rumored to come in a new light green color that compliments the new design. The Bloomberg report also mentions a better lamination technique that brings the display closer to the glass or sapphire crystal face of the watch. Recently Nikkei said that production of Apple Watch Series 7 has been delayed, likely due to a low yield rate. It’s unclear if the new watches will be unveiled this month alongside the iPhone 13 family or get pushed back. Even if the device is shown off this month, supply will likely be low. You can read more about these new watches in the original report by Mark Gurman here.