Hands-on: How the OWC Thunderbolt Hub made my Mac mini setup better [Video] 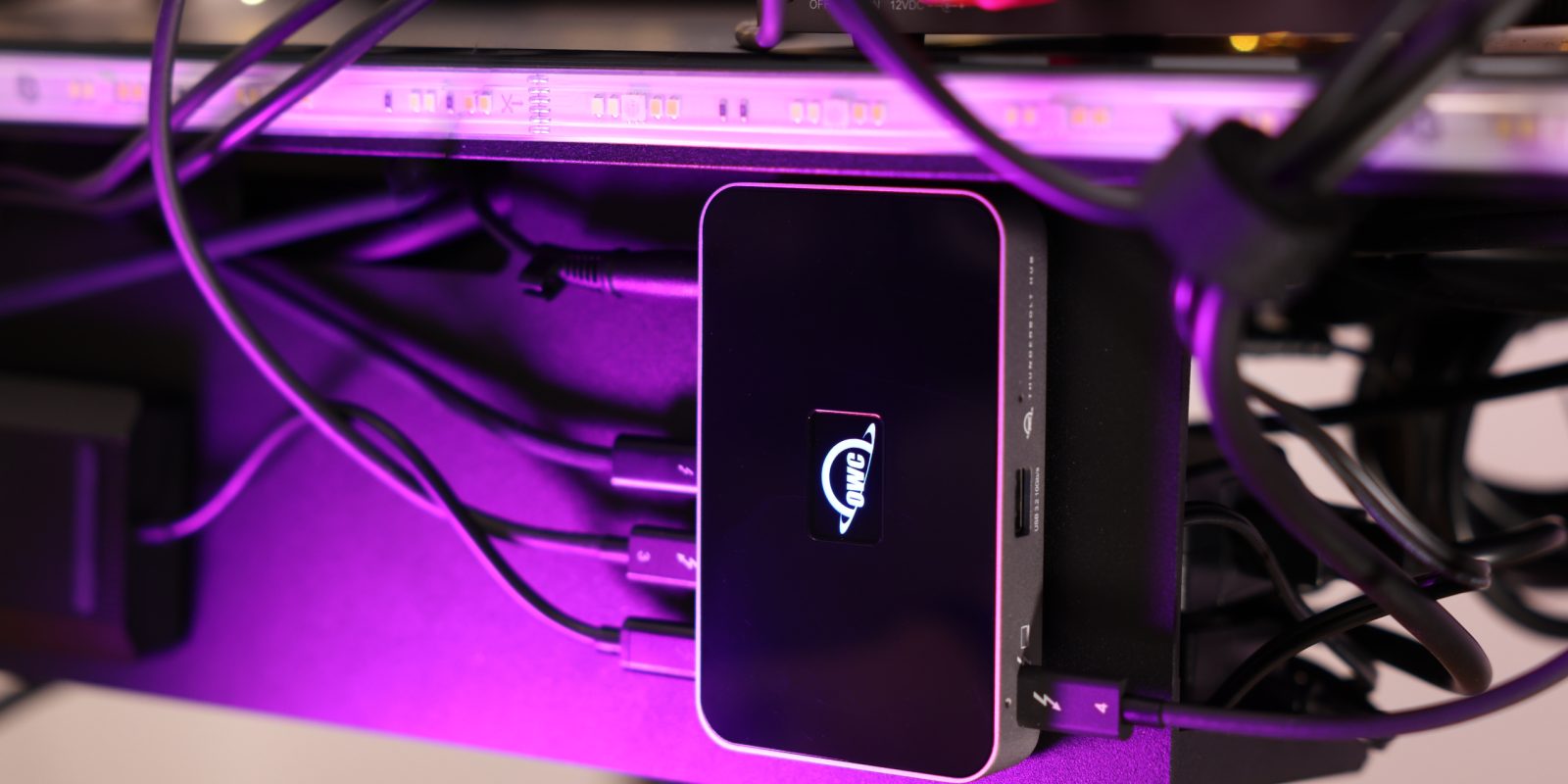 As I explained in my latest episode of Back to the Mac, the M1 Mac mini is my main desktop computer, but where necessary, I also use a 16-inch MacBook Pro in clamshell mode. In either case, I’ve found the OWC Thunderbolt Hub to be a great addition to my setup.

When using the M1 Mac mini, the hub expands the amount of Thunderbolt connections, which is a huge improvement since M1 Macs sport just two physical ports. For my M1 Max MacBook Pro, it allows me to maintain a connection to all of my Thunderbolt peripherals, including the Pro Display XDR, with just a single cable connection. Watch my hands-on video for the details.

The first thing you’ll notice about the OWC Thunderbolt Hub is just how small and minimal it is. Sans the extra USB-A connection, OWC resisted the temptation to inundate the hub with a bunch of additional ports, opting to keep the design straightforward and simple. The unit is comprised of aluminum with a shiny black plastic top and bottom housing.

As someone who planned from the very beginning to mount this hub behind my desk, I was happy about the small form factor. Using nothing more than a couple of strips of hook and loop tape, I easily mounted the hub on the rear of my desk, completely out of sight. Unfortunately, the hub comes with a power adapter that’s larger than the dock itself, but considering the power delivery requirements, the size of the power brick wasn’t unexpected.

When you connect the dock to power, the OWC logo on the top of the unit is illuminated with a bright white light. This light turns blue when a Thunderbolt connection is established with the host Mac or PC. I’ve longed complained about distracting lights on peripherals that serve no real purpose, but OWC was kind enough to allow users to reduce, or outright disable the light via a recessed button on the front of the hub. This is a nice gesture by OWC, and proves that its engineers listen to customer sentiment.

Because of the lack of ports, and because neither the Pro Display XDR (review) or the bus-powered OWC Envoy SSD features a secondary Thunderbolt port to support daisy chaining, connecting these two devices to my Mac mini terminates the connections, and hence occupies all of the physical Thunderbolt USB-C I/O. In other words, I could no longer use a Universal Audio interface featuring Thunderbolt with my Mac mini if I stuck to the setup, which is why I’ve been using Sound Device’s Mix Pre-3 II instead.

Adding this hub solves this issue, because it provides three Thunderbolt ports in exchange for one. When connecting the hub to my Mac mini, I gain access to two additional Thunderbolt ports for a total of four physical connections. That’s more than enough physical I/O to accommodate my SSD, display, and my audio interface of choice, the Universal Audio Apollo Twin X DUO.

Obviously this doesn’t increase the available Thunderbolt bandwidth available to the Mac, as that remains the same. It just means that my M1 Mac mini now has access to the same amount of physical Thunderbolt connections as the Intel Mac mini. To be clear, the OWC hub is not the only hub that can do this, as there are other available devices, such as CalDigit’s Element Hub (review), that can do the same thing.

WIth that being said, I’ve been happy with the results of this setup. I can run the Pro Display XDR at full 6016 × 3384 resolution at 60Hz, the Universal Audio Apollo Twin X DUO maintains a solid connection with no drop-offs or problems with UAD plugins, and the Envoy Pro SSD, while not able to reach its max potential as it is when direct connected to my Mac, is still plenty fast enough for my needs.

Unlike daisy chain setups, where each device depends on the connectivity of other devices higher up in the chain, each Thunderbolt port on the OWC hub functions as an independent branch, meaning you can swap devices on all three of the available ports without interfering with other devices connected to the hub.

OWC states that the unit can accommodate up to five Thunderbolt/USB-C connected devices, which means you can daisy chain off of the hub if you need to. The hub is also capable of supporting bus-powered devices, as is the case with my OWC Envoy Pro. Each port provides up to 15W of power.

The OWC Thunderbolt Hub was the missing puzzle piece to my desktop Mac setup. It makes working with the Pro Display XDR, which lacks Thunderbolt passthrough, a much nicer experience. Even with a port-starved M1 Mac mini, I can easily connect up to four Thunderbolt 4 devices, and more importantly, I can connect my Pro Display XDR, bus-powered SSD, and the Universal Audio Apollo Twin X with just a single cable.

What do you think? Are you using a Thunderbolt dock or hub with your Mac? If so, feel free to share your setup details down below in the comments.