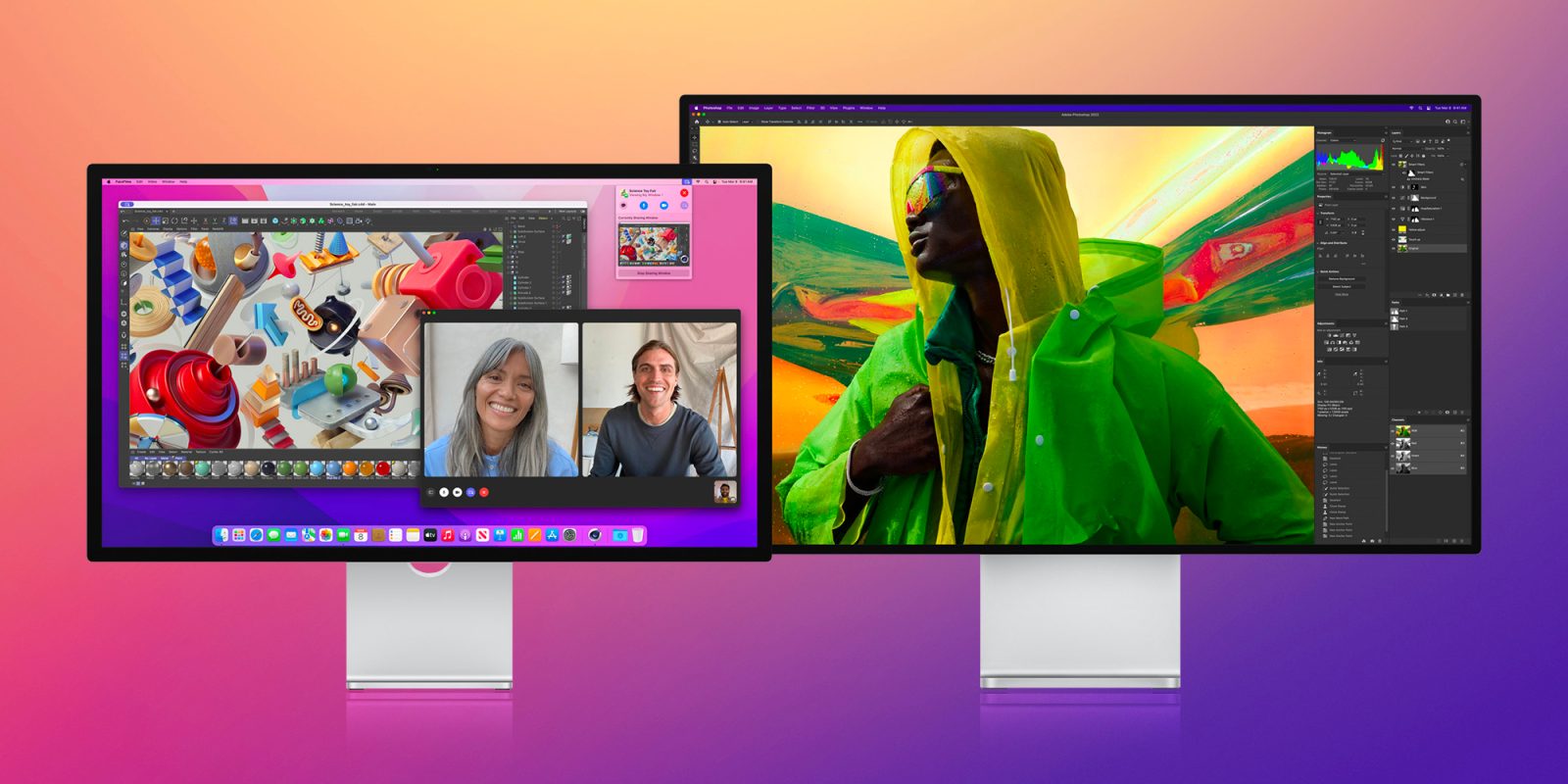 Almost six years since its Thunderbolt display was discontinued, Apple has officially re-entered the consumer external display market with the all-new Studio Display. With a starting price of $1,599, let’s take an in-depth look at the Apple Studio Display vs LG UltraFine and Pro Display XDR.

After the Apple Thunderbolt display was canceled in 2016, the official Apple-endorsed display became the LG UltraFine 27-inch 5K (full review) and 21.5-inch 4K – later replaced by the 24-inch 4K model.

Those check a number of boxes like Thunderbolt single-cable connectivity, 4 and 5K resolutions, P3 wide color, and more. But many dislike the plastic design of LG’s UltraFine displays that include chunky bezels (particularly on the 27-inch version) and an overall build below Apple’s standards.

While Apple making its own display again with the Pro Display XDR starting in late 2019 drummed up lots of excitement, its price tag of $5,000+ has kept it limited to professional use or those who aren’t price sensitive.

But now Apple’s Studio Display is here with an impressive list of features and a beautiful aluminum build in the style of the Pro Display XDR – all at a price more users, creators, and businesses will be able to afford.

There are a number of great USB-C/Thunderbolt 4K displays from third parties but the LG UltraFine 5K and 6K Pro Display XDR are ideal to compare to the 5K Studio Display when considering all the specs and features (just for fun, we’ve included the 4K LG UltraFine in the charts below).

However, if you’d rather opt for a larger screen and lower price than the Studio Display, we’ve got a detailed round-up here:

With a starting price tag just $300 above the LG UltraFine 5K and some of the appealing attributes of the $5,000+ Pro Display XDR, the Studio Display offers a compelling package in the $1,599-$2,299 range.

However, for those that are more budget-conscious, depending on the Studio Display configuration, keep in mind you could buy 2-3 of the $700 LG UltraFine 4K displays.

With the Studio Display, you’re getting a slightly brighter 5K panel than the LG UltraFine (600 vs 500 nits). For the trade-offs compared to the Pro Display XDR, there’s no HDR support/1600 nits HDR brightness.

And of course, the Studio Display is a 27-inch screen vs the 32-inch of the Pro Display XDR.

Pro Display XDR has more flexibility with refresh rates ranging from 47.95 to 60Hz.

But both the Studio Display and Pro Display XDR come with the optional nano-texture display upgrade that further reduces glare for those in bright workspaces.

All of these displays feature Thunderbolt 3 for single-cable connectivity with 3 additional USB-C ports for peripherals. However, Studio Display stands out with up to 10 Gbps speed for its USB-C ports that use USB 3.1 Gen 2.

With the lower bandwidth need of a 4K panel, the LG UltraFine 24-inch features an upstream and downstream Thunderbolt port plus 3 USB-C ports.

Here are the Macs and iPads compatible with Apple Studio Display:

The Studio Display is the first piece of hardware Apple has put its impressive 12 MP ultra wide camera outside of the iPad Pro/Air. That enables the valuable Center Stage feature for video calls and offers a 122-degree field of view.

Funny enough, Apple doesn’t mention 1080p on its Studio Display tech spec sheet at all, however, it did say at the “Peek performance” event that it’s the same camera as in the iPad Pro – and that specs page does indeed mention 1080p.

Another advantage for the Apple Studio Display vs LG UltraFine and the Pro Display XDR is a built-in 6-speaker audio system (4 force-canceling woofers and 2 tweeters) that can play Spatial Audio and Apple’s studio-quality 3-mic array.

The design and build quality alone are enough for many to choose Apple’s Studio Display over the LG UltraFine. The Studio Display takes design cues from the Pro Display XDR and the M1 iMac.

Interestingly, even with a metal build, the Studio Display is lighter than the LG UltraFine.

Apple’s Pro Display XDR excels for pros with 11 different reference modes (plus custom ones). Notably, the Studio Display features support for 9 of those 11.

Apple says on its Studio Display overview page that it works with macOS to allow for “fine-tune calibration” so it sounds like creating custom modes is available just like you can with the Pro Display XDR.

I think it’s wonderful to see Apple back in the consumer display arena and feel like Studio Display offers a lot of value for the price point. I think it could also invigorate some competition in the 5K+ display market.

For those that were on the fence with other $1,000+ monitors in recent years and chomping at the bit for Apple to make a comeback, Studio Display is probably a no-brainer. On the flip side, this launch may have made others realize they want to prioritize a larger screen than 27-inches and are fine with a 4K or 5K/2K resolution or maybe would rather pick up a couple of less expensive 4K displays instead of one Studio Display.