40+ iOS 15.4 changes and features – hands-on with everything new for iPhone and iPad [Video] 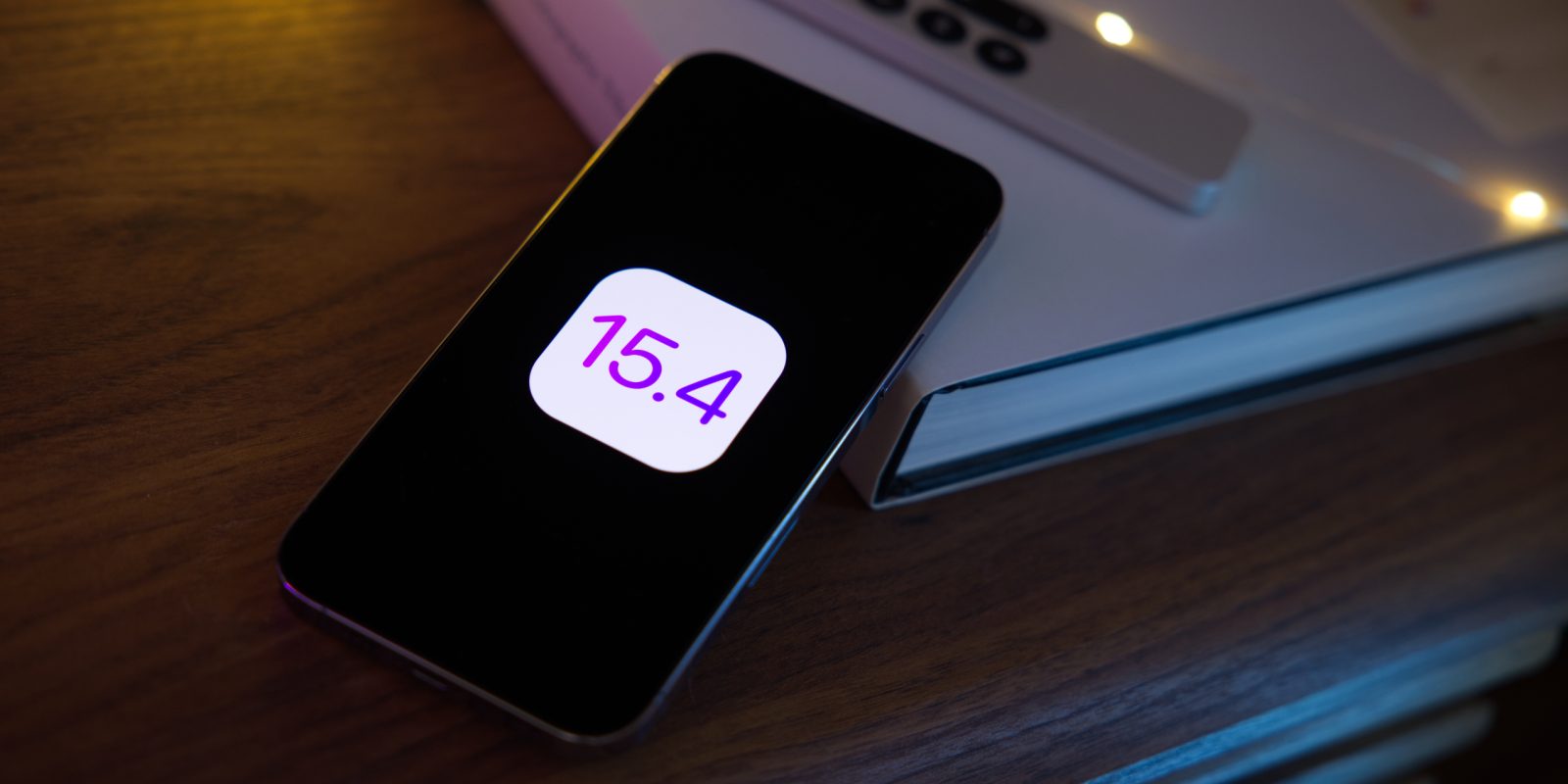 Apple yesterday shipped the final public versions of iOS 15.4 and iPadOS 15.4. The releases include many iOS 15.4 changes and features, along with several noteworthy updates. Included is the ability to unlock your iPhone while wearing a mask, support for Universal Control on the iPad for those running the macOS 12.3 beta, brand new emoji, a new Apple Wallet widget, and tons more.

In this hands-on video walkthrough, we take a look at over 40 new iOS 15.4 changes and features. Be sure to subscribe to 9to5mac on YouTube for more hands-on videos.

Video: iOS 15.4 changes and features for iPhone and iPad

After initially being unveiled at WWDC 2021, Universal Control, the feature that lets you control multiple iPads and Macs from a single input source, finally arrives in iOS 15.4. Keep in mind that you’ll also need to be running macOS 12.3 or higher to get Universal Control working. Be sure to watch my full hands-on Universal Control tutorial as I showcase everything about this exciting new feature.

Like the 6th-generation iPad mini, other iPads running iPadOS 15.4 can now take advantage of dynamically changing volume buttons based on device orientation.

If you’re a Magic Keyboard user, you might appreciate a new toggle in iPadOS 15 that lets you adjust keyboard backlight brightness via Control Center. Keep in mind that you’ll need to be in a dark or dimly-lit environment before the keyboard backlight – and thus the toggle – becomes active.

Replicating already-present functionality in Settings → General → Gestures, users can now change corner gesture settings directly from the Notes app preferences. In iOS 15.4, it’s also possible to invoke a corner gesture from either the bottom-right or left corner and use it to take a screenshot or start a Quick Note.

As it normally does for new hardware releases, Apple includes a new wallpaper to match the just-launched green iPhone 13 and iPhone 13 Pro models.

American Siri voice users will find a new voice simply entitled American (Voice 5). The new voice can be configured in Settings → Siri & Search → Siri Voice. You can hear an example of the new Siri voice here.

Apple has taken measures to address AirTag stalking with a new anti-stalking warning that appears during the initial AirTag setup process. The new warning is there to inform would-be stalkers about potential legal and criminal ramifications from stalking.

Updated Find My “Me” tab

Alongside new anti-stalking measures is a slightly revamped Me tab in the Find My app. The updated Me tab eschews the Item Safety Alerts toggle for direct links to Find My notifications preferences.

Apple has broken out Find My notifications into two different categories in iOS 15.4. You can find separate Tracking Notifications and Find My panels in Settings → Notifications.

Less ambiguous Find My alerts are also featured in iOS 15.4, with specific details on the types of devices that may be following you. For instance, if an unknown pair of AirPods Pro is detected as “moving with you,” the alert will clearly state “AirPods Pro Detected” rather than a vague “Unknown Accessory Detected.”

Support for Face ID while wearing a mask

Just in time for dwindling mask mandates, Apple has finally added direct support for Face ID while wearing a mask. The new iOS 15.4 feature, which doesn’t require an Apple Watch, lets users unlock their iPhones and even use authentication with third-party apps while wearing a mask. To learn more about Face ID unlock with a mask, be sure to watch our in-depth walkthrough with the feature.

If you invoke Apple Pay by double-pressing your iPhone’s Side button prior to unlocking, you’ll be met with a new authentication screen that’s devoid of any personal information.

You’ll find a new Apple Wallet widget in iOS 15.4 that’s exclusive to Apple Card users. The new 2×2 widget allows you to display your card balance and available balance on a weekly, monthly, or yearly period.

If you’re a dual SIM user, switching between phone numbers in the Messages app just became a little less cumbersome. When reengaging a new or established conversation, you can now directly select the phone number you wish to use directly from the conversation screen.

iOS 15.4 fixes a bug with Safari that would cause a break in the full bleed status bar area.

You can now search through installed extensions directly from Safari. Simply tap the ‘aA’ button in the address bar and select Manage Extensions. You’ll now see a search box at the top of the Manage Extensions interface.

WebXR Device API is a Web API that describes support for accessing AR and VR devices. With the rumors that Apple is knee-deep in the development of its own headset, it’s no surprise that we’re seeing glimpses of features like these.

Now, it’s easy to revert back to stock Safari settings after toggling the numerous experimental settings.

A new provision to prevent iCloud Keychain from saving passwords without usernames is present in iOS 15.4. When creating a new password, and Safari isn’t sure which user name that password belongs to, you’ll see a popup asking you to enter the user name for your account on that specific website.

Like other passwords managers, such as 1Password, it’s now possible to add notes to the passwords in your keychain. You can even perform searches on the contents of the notes in Settings → Passwords.

SharePlay-enabled apps can now display a SharePlay button within the Share Sheet to make it easier to start a SharePlay session.

TV app Up Next Display preferences

The Up Next panel that appears at the top of the TV app’s Watch now Page can now be customized to display poster artwork or a still frame.

Apple’s new Custom Email Domain support – which was revealed at WWDC 2021 – is somewhat integrated into iOS starting with iOS 15.4. Previously, you’ve been able to set up custom email domains only via iCloud.com, and while iCloud.com is still a requirement, you can now start the process of adding a custom domain directly from iOS’ iCloud Mail preferences.

iCloud Mail now gains its own full panel within iCloud preferences and consolidates all related settings into a single area.

You can now capture Live Text directly into note or reminder via the new Scan Text feature in the stock Notes app or Reminders app.

New UI tweaks for invoking the camera within the Magnifier app are now present in iOS 15.4. You now have the option of switching between the front-facing camera, ultra wide angle for up close shots, or automatic mode that will switch between the appropriate camera dynamically.

When scrolling down on a Playlist within Apple Music, the name of the playlist is now displayed in the top bar.

A new SharePlay shortcut is now included in the Music app when long-pressing on a song or album or when utilizing context menus.

The stock Podcasts app includes a new splash screen previewing the new filter and browse by season changes in iOS 15.4.

When you visit the main page for a podcast that you subscribe to, you’ll now see a handy filter button that lets you filter the podcast by unplayed or downloaded episodes.

The Podcasts app now allows you to filter podcasts that you subscribe to by seasons.

Tapping your avatar in the upper right-hand corner of the App Store app will reveal a new Notifications panel in iOS 15.4. Inside that panel, you’ll find the ability to toggle notifications for New Features & Updates and Recommendations & Offers.

A modified Top Stories layout in the stocks app includes increased padding between stories, bylines, and a context menu to easily save or share a story.

The AirPods status screen that appears when you open your AirPods charging case next to your iPhone features several subtle UI tweaks.

Instead of a generic pair of headphones, the AirPods accessibility panel includes an AirPods Pro glyph.

The Siri-powered visual lookup feature, which lets you quickly gain info on things like flowers, animals, etc., is now available in more countries in iOS 15.4.

iOS 15.4 is the biggest iOS 15 update since the initial release debuted last September. Features like new emoji, Universal Control, and Face ID with mask support might garner the headlines, but there are many, many smaller quality of life enhancements that are now available in iOS 15.4. Of course, that doesn’t include the behind the scenes bug fixes, which are also a huge reason to upgrade.

What’s your favorite new iOS 15.4 feature? Sound off down below in the comments with your thoughts.