END_OF_DOCUMENT_TOKEN_TO_BE_REPLACED

Some users reporting iPhone crashes on iOS 9.3 when tapping links in Safari and other apps [Update]

[Update: Although details around the problem with iOS 9.3 links causing hangs and crashes remain sparse, it appears to be related to the third-party apps a user installed on the system. We have been able to take an unaffected iPhone 6 and iPad Pro, install the Booking.com app, and then observe Safari consistently hanging when long pressing a link. We do not recommend repeating this however to see the bug for yourself, as the problem appears to stay around. Our test devices continue to exhibit the crashing bug after uninstalling the app and rebooting. We are not sure what exactly causes the issue and thus do not know what class of apps cause the problem to arise. It is likely not limited to just one app, but we are yet to find others. Apple is yet to comment officially on the issue.]

Readers are reporting a strange bug with iOS 9.3 (and older versions apparently, exact characteristics of affected devices is unclear), primarily affecting the latest Apple devices, iPhone 6s and iPhone 6s Plus. The issue has also been reported on older phones and some iPad models as well. The cause is unknown, but many users are finding themselves unable to open links in Safari, Messages, Mail, Notes and other apps. Instead of visiting the target website, the app crashes, freezes or hangs. Hundreds of reports have already been posted about the iOS 9.3 problem on the Apple Support forums.

Other users are reporting that tapping on links simply does nothing, whereas a tap-and-hold causes a crash. A permanent fix for the issue is not known and Apple has yet to comment on what may be going on. Some people have reported that disabling JavaScript partially solves the issue for opening links in Safari, but remains for other apps.

END_OF_DOCUMENT_TOKEN_TO_BE_REPLACED

If Apple hasn’t yet made the Ethernet network port on your Mac obsolete by not including it, as is the case with most Macs sold today, then it may have accidentally broke the port last week in an OS X kernel extension update. Many users complained about the issue online: they had randomly found their Macs no longer connecting to the Internet and their Ethernet port simply not working. Apple has now officially acknowledged the problem on its support pages. Luckily, the software problem isn’t permanent and the bug can, usually, be easily resolved.

Apple has already fixed the Ethernet software problem for users going forward. Here’s the fix if you were affected …

END_OF_DOCUMENT_TOKEN_TO_BE_REPLACED

Russia is testing a ‘Doomsday Drone’ for World War 3

This iOS date trick will brick any device [Video] An interesting bug relating to the date and time system in iOS has emerged recently. Several users have discovered that if you change your iOS device’s date to January 1st, 1970, your device will be permanently bricked. You can see the process in the video below, and while I don’t have any desire to try it out to confirm, it’s pretty apparent based on separate reports that it’s a legitimate issue.

END_OF_DOCUMENT_TOKEN_TO_BE_REPLACED

Safari on iOS and Mac crashing today for many users, bug related to Safari Suggestions, here’s how to fix

Update: The Safari crash bug has now been fixed, according to Apple.

A strange bug is affecting many Safari users today, causing crashes on iPhone, iPad and Mac. For many users, simply tapping in the URL bar will cause the browser app to crash completely.  The exact issue causing the crashing has not been locked down, but it appears to be related to Apple’s Safari Suggestions service. It’s a very annoying bug that is affecting a lot of people all of sudden today.

When you type a URL, Apple sends what you type to its servers, returning a response with autocomplete search queries, Top Sites and other info. There appears to be a bug in this server request that is causing Safari to randomly crash. Users are discovering some potential workarounds until Apple fixes the problem properly …

END_OF_DOCUMENT_TOKEN_TO_BE_REPLACED 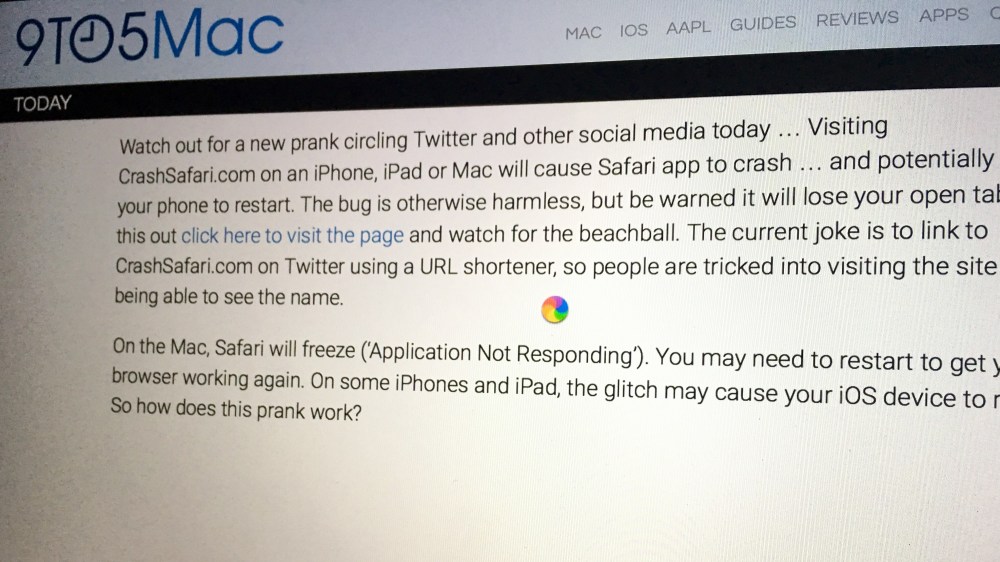 Watch out for a new prank circling Twitter and other social media today. Visiting CrashSafari.com on an iPhone, iPad or Mac will cause Safari app to crash … and potentially cause your device to restart. The bug is otherwise harmless, but be warned it will likely cause you to lose your open tabs.

To try this out click here to visit the page and watch for the beachball. The current troll is to link to CrashSafari.com on Twitter using a URL shortener, so people are tricked into visiting the site without being able to see the name.

On the Mac, Safari will freeze (‘Application Not Responding’). You may need to restart your machine to get your browser working again. On some iPhones and iPads, the glitch may cause your iOS device to reboot. So how does this prank work?

END_OF_DOCUMENT_TOKEN_TO_BE_REPLACED

A look at Google’s cancelled Pixel 4a XL — well, some of it [Gallery]