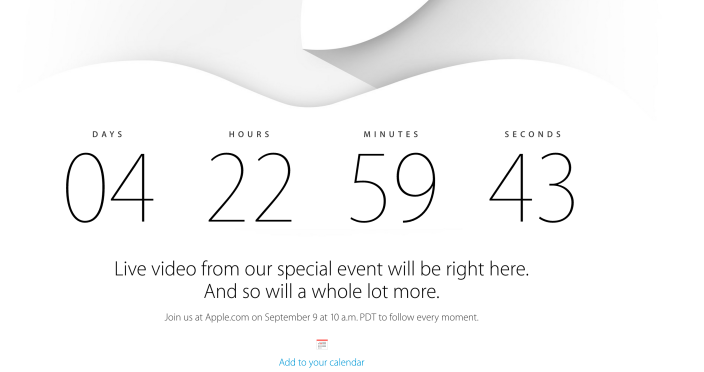 Apple has just announced that it will be live streaming its upcoming event later this month on September 9th. Its website also includes a countdown clock pictured above and a link for Apple users to add the event to their calendar.

Apple previously announced the event scheduled to take place next week on September 9 at 10 a.m. PDT. This year the event gets a change of location from Apple’s usual Moscone West venue with the event set to go down at the Flint Center for the Performing Arts in Cupertino. As we’ve reported in the weeks leading up to the event, Apple is also constructing a large building outside of the Flint Center, but what it’s for at this point remains a mystery.

At the event, Apple is expected to unveil its much anticipated larger iPhones that are rumored to include 4.7-inch and 5.5-inch models. Separate reports claim Apple will also use the event to unveil its new wearable “iWatch/iBand” product. The latest reports published today from the often reliable KGI analyst Ming-Chi Kuo offered more details on both the new iPhone models and specs for iWatch and also claimed a new iPad Air could launch the same day.

While Apple’s new wearable is expected to make an appearance at the event for an official unveiling, the most recent reports claim a launch for the product won’t likely happen until next year.

Interestingly, it seems that Windows users may be out of luck. Live streams of previous events have included an explicit reference to Windows viewing (QuickTime 7 on Windows), but the September 2014 text omits this designation. It reads:

Apple notes that live streaming of the event from its website will require Safari 5.1.10 or later on OS X v10.6.8 or later; Safari on iOS 6.0 or later. Streaming via Apple TV requires second- or third-generation Apple TV with software 5.0.2 or later.

Although it could be simply an omission, as it reads currently, it seems like Windows users are not allowed to watch Apple’s product unveilings for the first time ever.