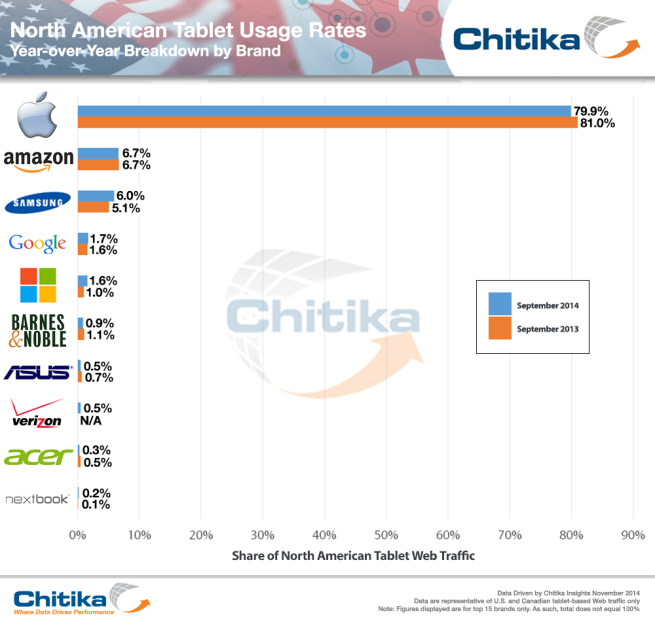 The latest numbers from advertising company Chitika Insights show that iPad web usage in North America rose nearly 2% in September, marking a slight increase over the third quarter. Chitika found the iPad to have a 79.9% share of tablet web traffic in the United States and Canada during the month, compared to a 78.0% share reported in July.

Despite the marginal increase over the third quarter, iPad web usage in September still suffered a year-over-year decline over the 81% share it held in the year-ago quarter. Amazon, Samsung and Google tablets trailed in second, third and fourth place, with 6.7%, 6.0% and 1.7% shares of tablet web traffic in September.

The data is determined based on a sample of tens of millions of U.S. and Canadian tablet-based online ad impressions running through the Chitika Ad Network.

While the iPad user base posted a slight year-over-year usage share loss, iPad users generated the largest quarter-over-quarter usage share increase of any tablet brand at 1.9 percentage points. A variety of larger retailers including Best Buy, Target, and Staples discounted iPad Mini and Air models leading up to the release of two new iPads early this fall, which may have contributed to the recent share rise. While Apple has stated that global iPad sales have trended down over the past few quarters, this doesn’t seem to quite as true domestically, as IDC notes that the U.S. is driving growth in the tablet market in general.