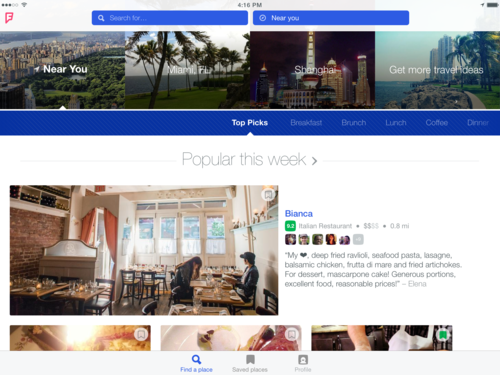 Earlier this year, Foursquare pulled a Facebook and split its mobile app in half with check-ins moving to a new app branded as Swarm and location discovery and recommendations becoming the sole focus of its Foursquare-branded app.

Both apps were iPhone-only for iOS users as Foursquare relied on a mobile site for iPad users wanting to check-in from a tablet, but now that Foursquare has become a full-fledged Yelp competitor with its own dedicated app to finding new places to travel and venues to review, Foursquare is giving users a native iPad app as well.

You still can’t “check-in” from the iPad as Foursquare is now focused on recommending venues and Swarm doesn’t feature an iPad version, but the Yelp-like Foursquare app is now available for the iPad. You can download the new app from the App Store and read more about it from Foursquare.