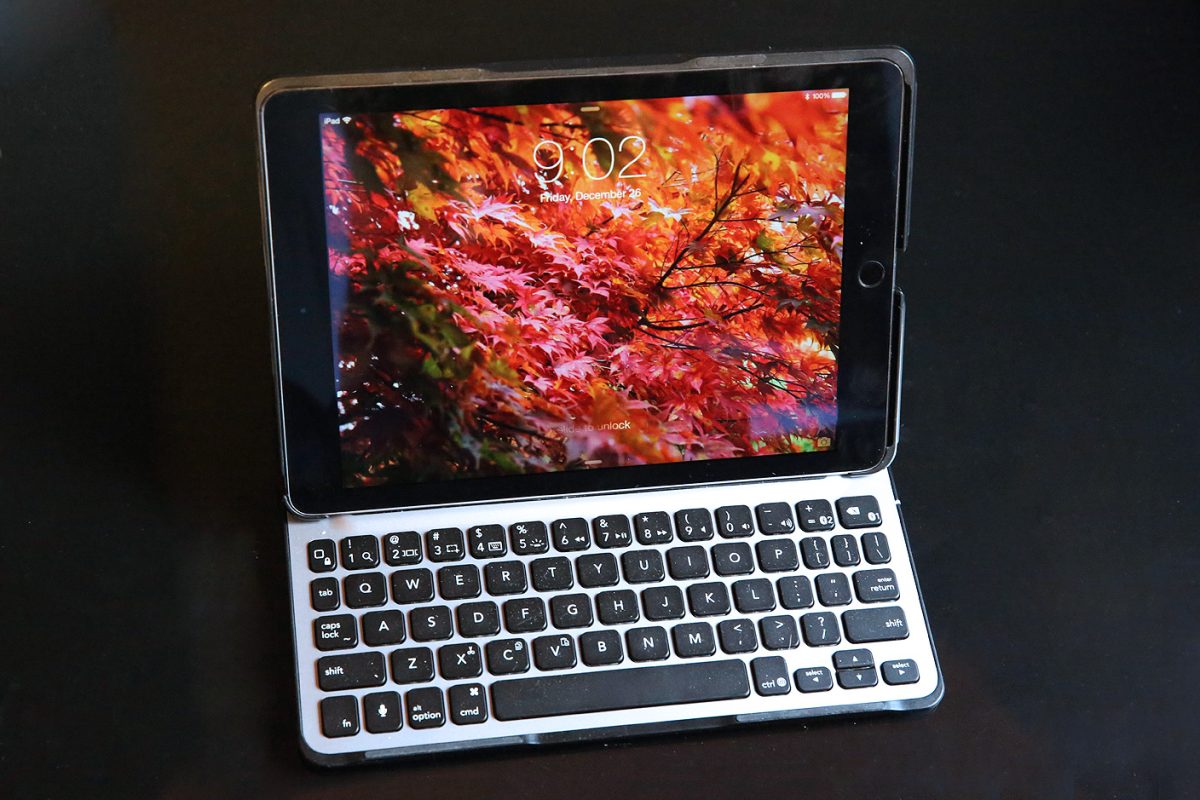 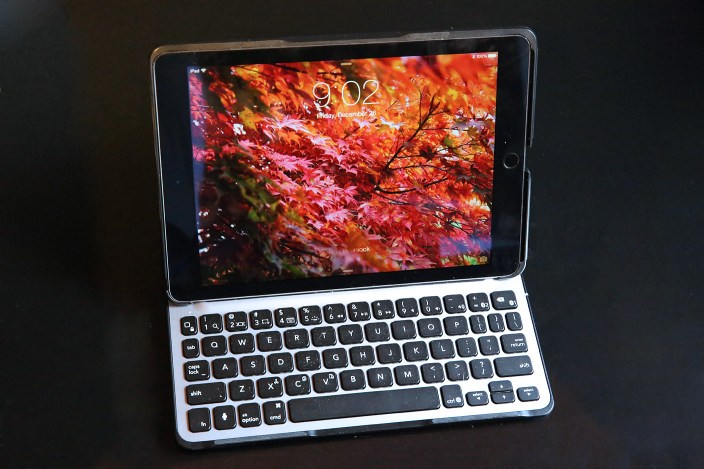 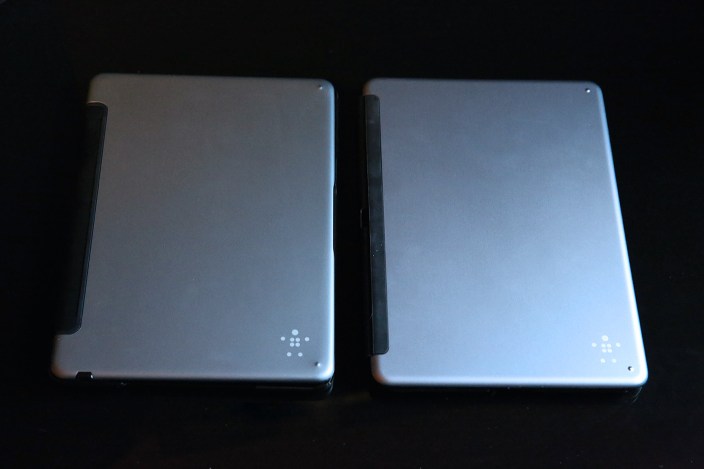 Belkin is offering QODE Ultimate and QODE Ultimate Pro in two colors: black plastic and leatherette with space gray metal, and white plastic with gray leatherette and silver metal. Each case roughly doubles the iPad Air 2’s thickness and adds several extra millimeters to its footprint: Ultimate adds more thickness on the left and right, while Pro adds it to the bottom and right. All of the materials look and feel quite nice, particularly the metal front shells and matte plastic keys, which distinguish both QODEs from entry-level keyboard cases. 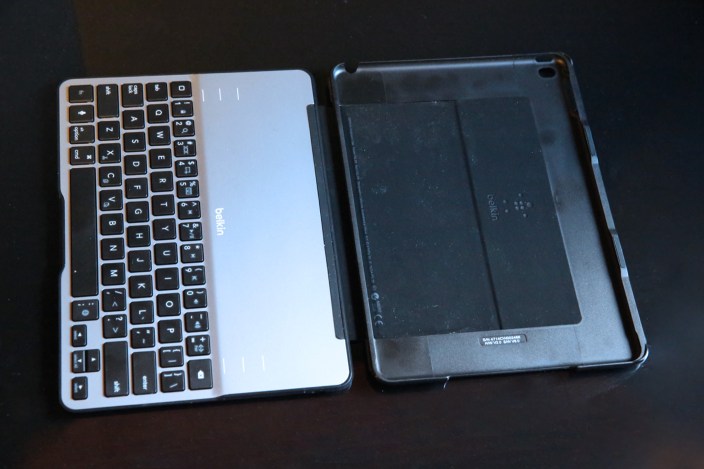 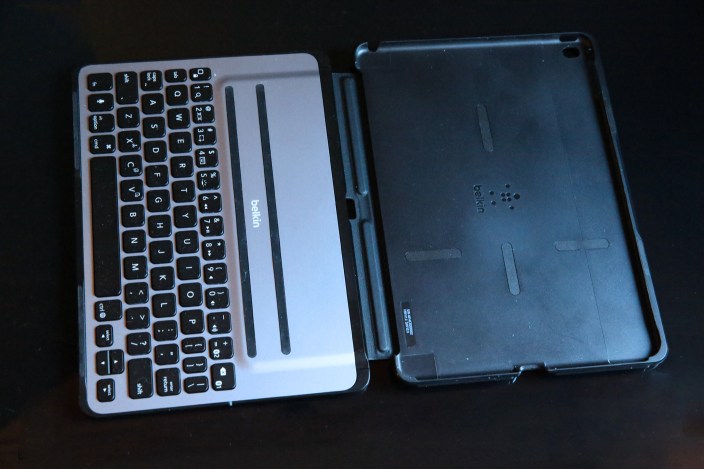 While it’s hard to tell the two cases apart at a distance, Pro has added functionality; its case separates from the keyboard so that the parts can be used separately, a genuinely helpful feature. Ultimate’s case is permanently connected to the keyboard, so they need to be kept and carried together. Each comes with a micro-USB cable to recharge the battery; Ultimate runs for 4-6 months between charges, while Pro promises to run for an impressive full year, both assuming around 2 hours a day of usage. 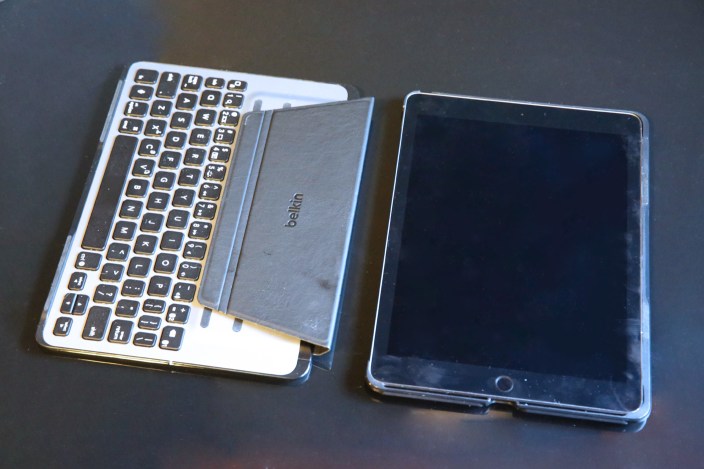 If you didn’t really study their keyboards, you might think that using the two keyboard cases was pretty much identical. Each one folds open with the iPad on one side and the keyboard on the other; the hinge then partially separates from the plastic shell’s back to let the iPad magnetically attach to one of two or three angled attachment points atop the keyboard. Power is activated on each Bluetooth keyboard automatically, as is pairing, so once each case is open, you’re ready to type. Pro lets you detach and rotate the case to portrait orientation; Ultimate (shown below) does not. 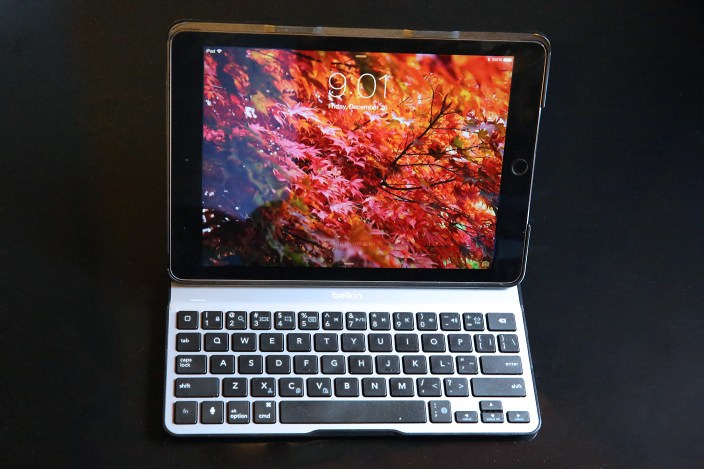 Unfortunately, Ultimate’s and Pro’s keyboards are different enough that the less expensive model doesn’t really feel “ultimate.” Each has the same 9″ by 3.2″ typing area, but only Pro tries to squeeze virtually every key from a full-sized keyboard into that space, which it achieves by shrinking the width of punctuation and return keys. By comparison, Ultimate actually tosses out some keys, moving others around and remapping some characters. For instance, colon and semi-colon move from the third row to the fifth row, next to arrow keys; question mark and slash get shifted to new positions atop the < and > keys. 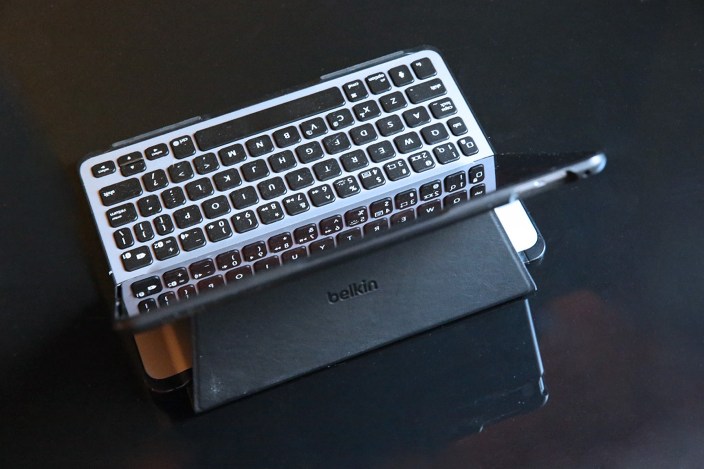 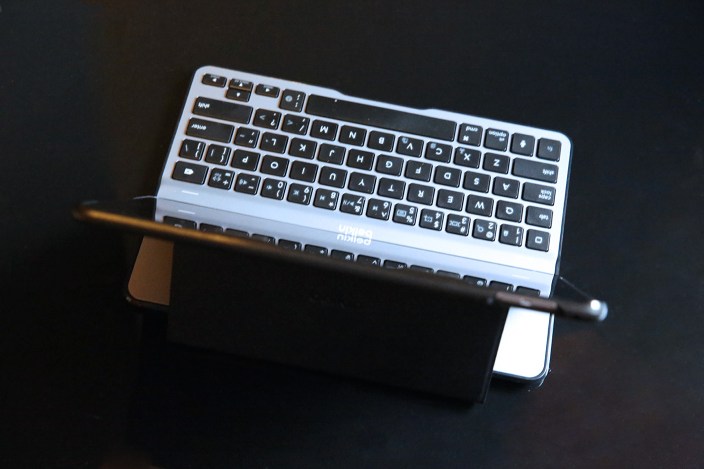 It’s a central tenet of iPad keyboard design that if you have to seriously relearn standard key positions to use an accessory, you might as well just use the iPad’s built-in virtual keyboard instead. Although some of its keys are a little cramped, Ultimate Pro passes this test; within 15-30 minutes, you’ll be typing as quickly on Pro as a standard keyboard. Ultimate doesn’t fare as well: unless you don’t use colons, semi-colons, or slashes much, you’ll find yourself awkwardly pausing to hunt for keys. Belkin also upgrades Pro with optional three-level key backlighting, which works well, plus the ability to pair with a second Bluetooth device, using clearly marked buttons to toggle seamlessly between them. 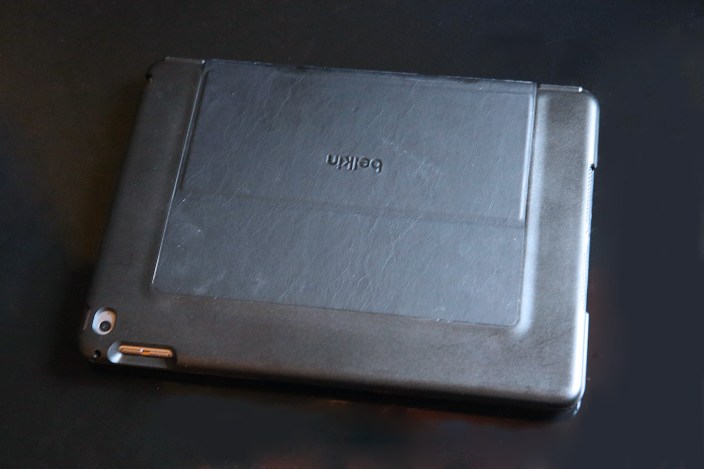 Both Ultimate and Ultimate Pro are pretty good in the case department. Neither offers button or port coverage, but Pro reroutes the bottom-firing speakers forwards using atypically nice bottom speaker covers, rather than following Ultimate and leaving a large hole in the bottom of the case. Although the iPad Air 2’s left edge is left bare inside Pro’s case when the keyboard is detached, it’s otherwise a properly-contoured hard plastic and leatherette shell that lets you substantially enjoy the new tablet’s thin profile. 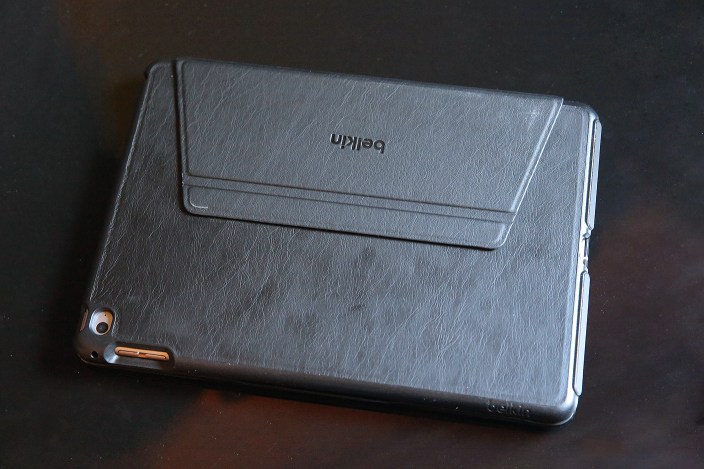 High-end iPad keyboard cases — particularly ones for ever-shrinking iPad Air and iPad mini models — really have to justify their price tags, and the new QODE Ultimate Keyboard Case falls just a little short; the Ultimate Pro Keyboard Case does just enough to merit the premium. There aren’t many iPad Air 2-specific options available yet, but you can buy a basic iPad keyboard case (with less impressive tailoring and fewer features) for less, or just pair a fairly portable $70-$100 Bluetooth keyboard (such as Apple’s very good Wireless Keyboard or Logitech’s excellent Easy-Switch K811) with any iPad Air 2 case you want. But if you want a deluxe-looking and -feeling solution, complete with multi-orientation/multi-angle support, a standalone case, backlit keys, and two-device Bluetooth pairing, Ultimate Pro delivers plenty for the price. It will be available here in early January.