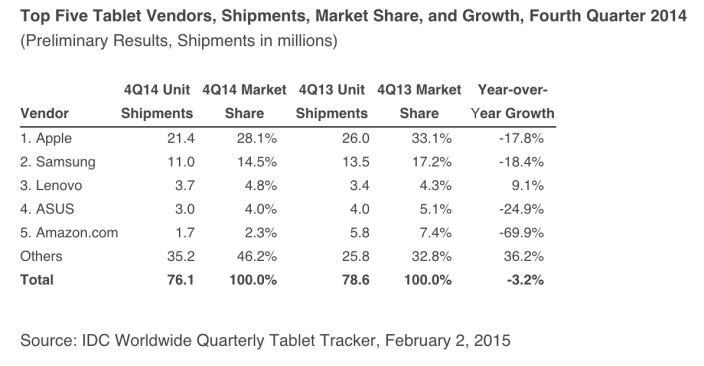 IDC is out today with its numbers on tablet shipments for Q4 2014 showing Apple remained on top of the market both last quarter and throughout 2014 despite a slight drop in overall market share.

The remaining spots in the top five for Q4 include Lenovo (4.8%), ASUS (4%), and Amazon (2.3%). While Apple and Samsung saw slight drops, Lenovo and the “Others” category gained market share during the quarter.

While a potentially declining tablet market has been a big topic of conversation over the last few quarters, Apple and CEO Tim Cook have consistently defended the product line citing new opportunities for growth going forward. During the company’s latest Q1 2015 earnings call, for example, Cook noted he hopes the company’s partnership with IBM to push mobile enterprise solutions will be an area that drives iPad growth in the near future. The fear, as IDC put it today, is that “cannibalization at the bottom from the iPhone and at the top from the Mac appear to be a serious issue for the iPad.”

As always, IDC’s numbers account for units shipped, not necessarily sales. IDC’s numbers include “slate tablets plus 2-in-1 tablets.”