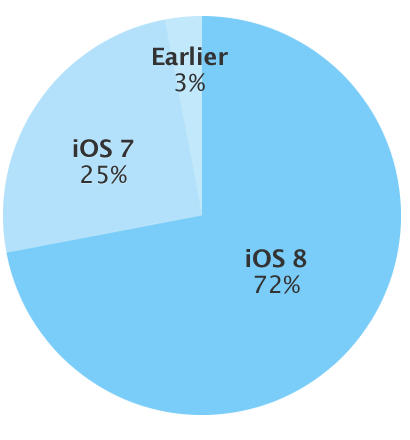 Since the lower percentage reported two weeks ago and a similar 68% reported four weeks ago, Apple has released iOS 8.1.3 which featured stability improvements—something which may have kept users from upgrading before—and mentioned requiring less storage space necessary to update. Storage space required to update over-the-air has long been an issue for devices, especially with 8GB and 16GB of storage, which has been thought to explain the slower pace of iOS upgrading this year since the year prior.

Mixpanel, which puts iOS 8 adoption at roughly 74% based on its data and tends to be in line with Apple’s own data, reports iOS 7 adoption reached roughly 85% adoption during the same period a year ago. This means even with today’s rise in adoption, iOS 8 is still on fewer devices now relative to iOS 7 a year ago.

While 1 in 4 iOS devices accessing the App Store still run iOS 7 and can potentially upgrade to iOS 8 (this includes iPhone 4s and iPad 2 users which may resist for performance reasons), Apple did sell over 74 million iPhones and over 21 million iPads during the holiday quarter which all presumably ship with or support the latest operating system adding nearly 100 million iOS 8 devices to the mix.